All of us were a bit bummed to leave the beauty, people, diving, and simplicity of Cabo Pulmo but you gotta do what you gotta do. Plus, we’d been promised that we could swim with the gentle giants known as the “Tiberon Ballena”, “Whale Sharks”, “Big Papa Plankton Eater”, or quite simply “Flavio”. We cruised back up to La Paz to stay with our excellent hosts, Frieda & Lee…did we mention we met them at an AutoZone? They were so kind to let us stay at their place, even letting Justin park his motorcycle in their living room. 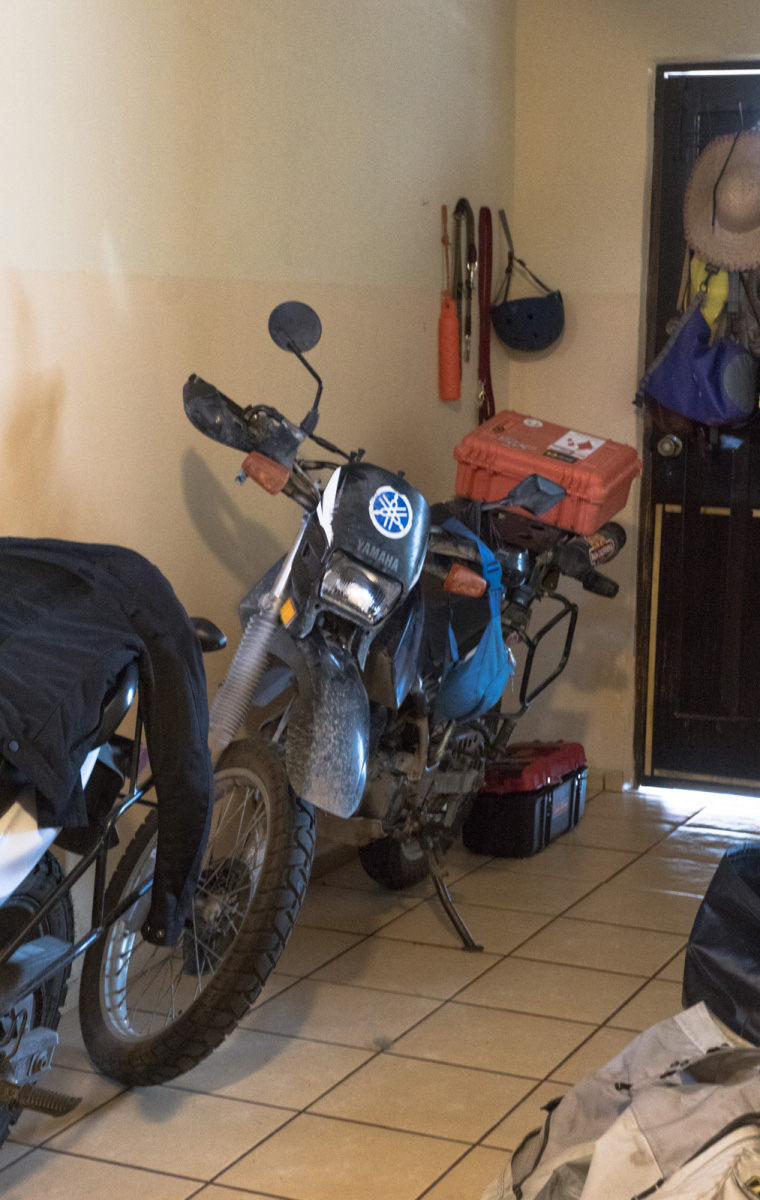 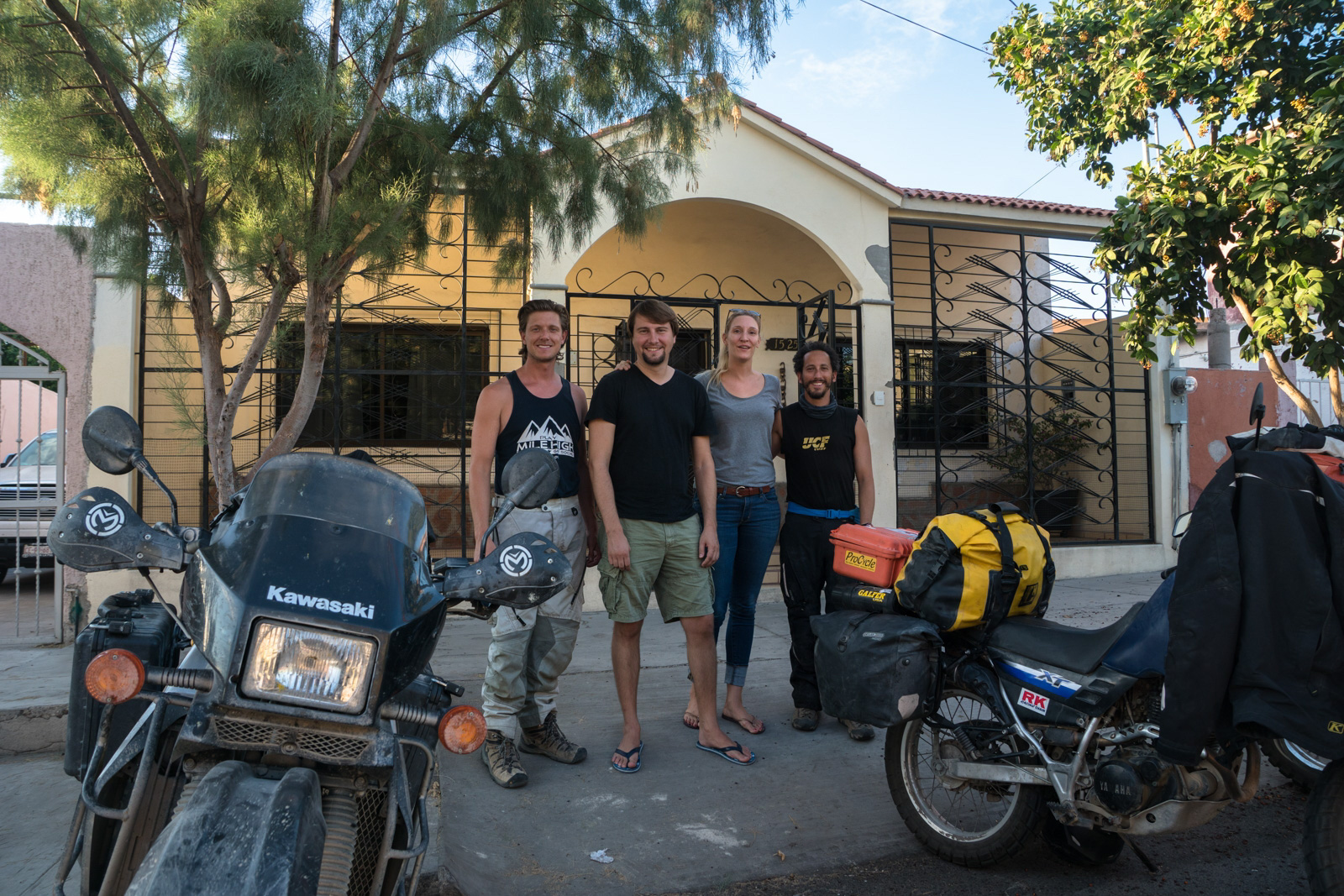 The Fellas arrived safely in La Paz and the next morning Mitch and Simone decided to go to the Mega (Mexico’s version of Target) to get some supplies. Sounds like a simple enough task, right? Wrong! As the Fellas exited the store, Mitch dragged his feet along the elevator getting the rubber sole of his trustworthy Chacos stuck in the bottom grooves! Man is he a special one! The scene turned quite comedic when 3 officers showed up and tried everything they could think of to get the sandal out…pulling, twisting, sweating, nothing seemed to work! Mitch finally asked the older gentleman “Can’t you just put the key in and reverse the track?”. The guard obliged and, low and behold, the sandal popped out as easy as it went in. A few disgruntled shoppers were forced to “walk” the escalator, but besides that no harm, no foul… 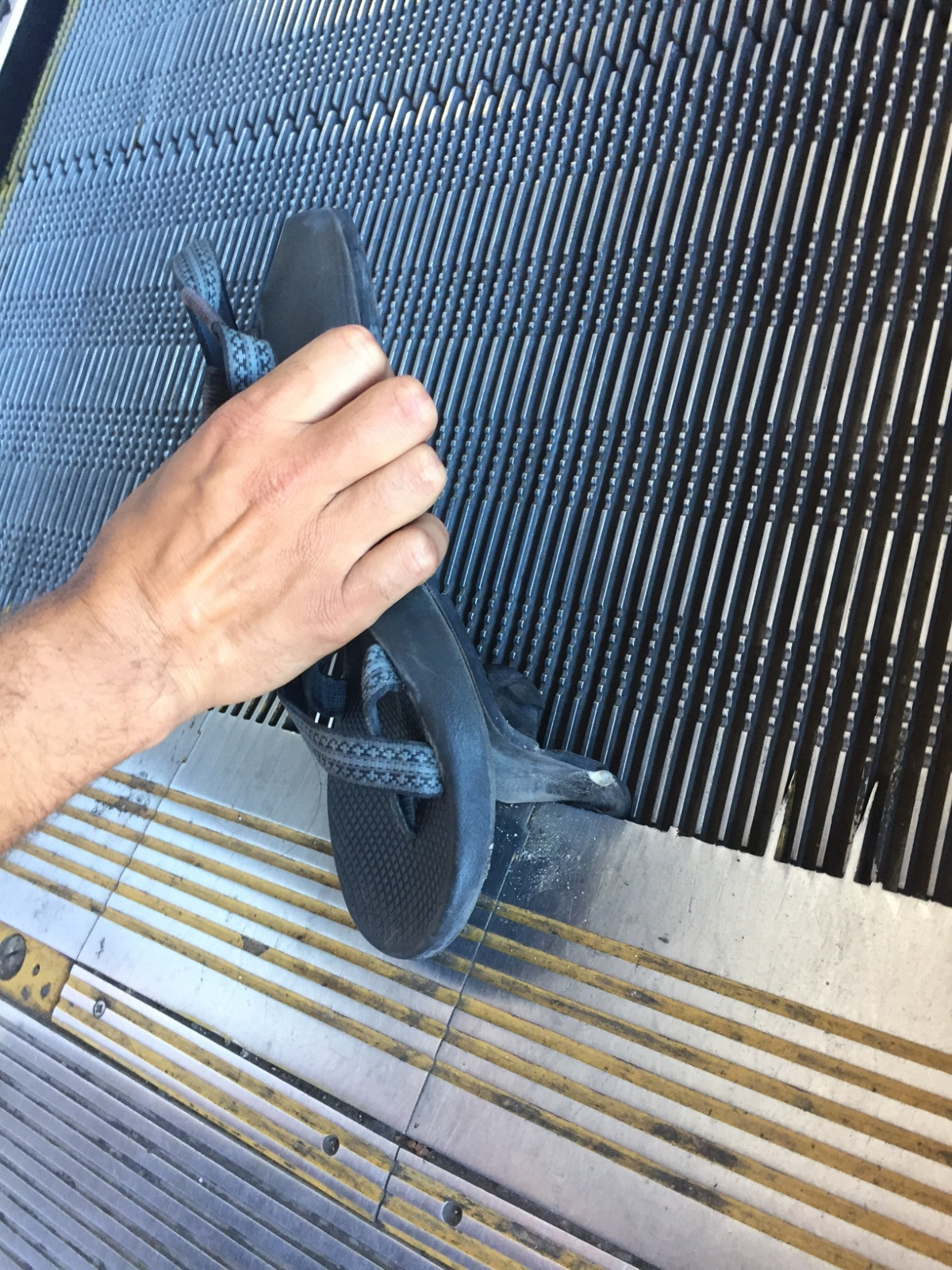 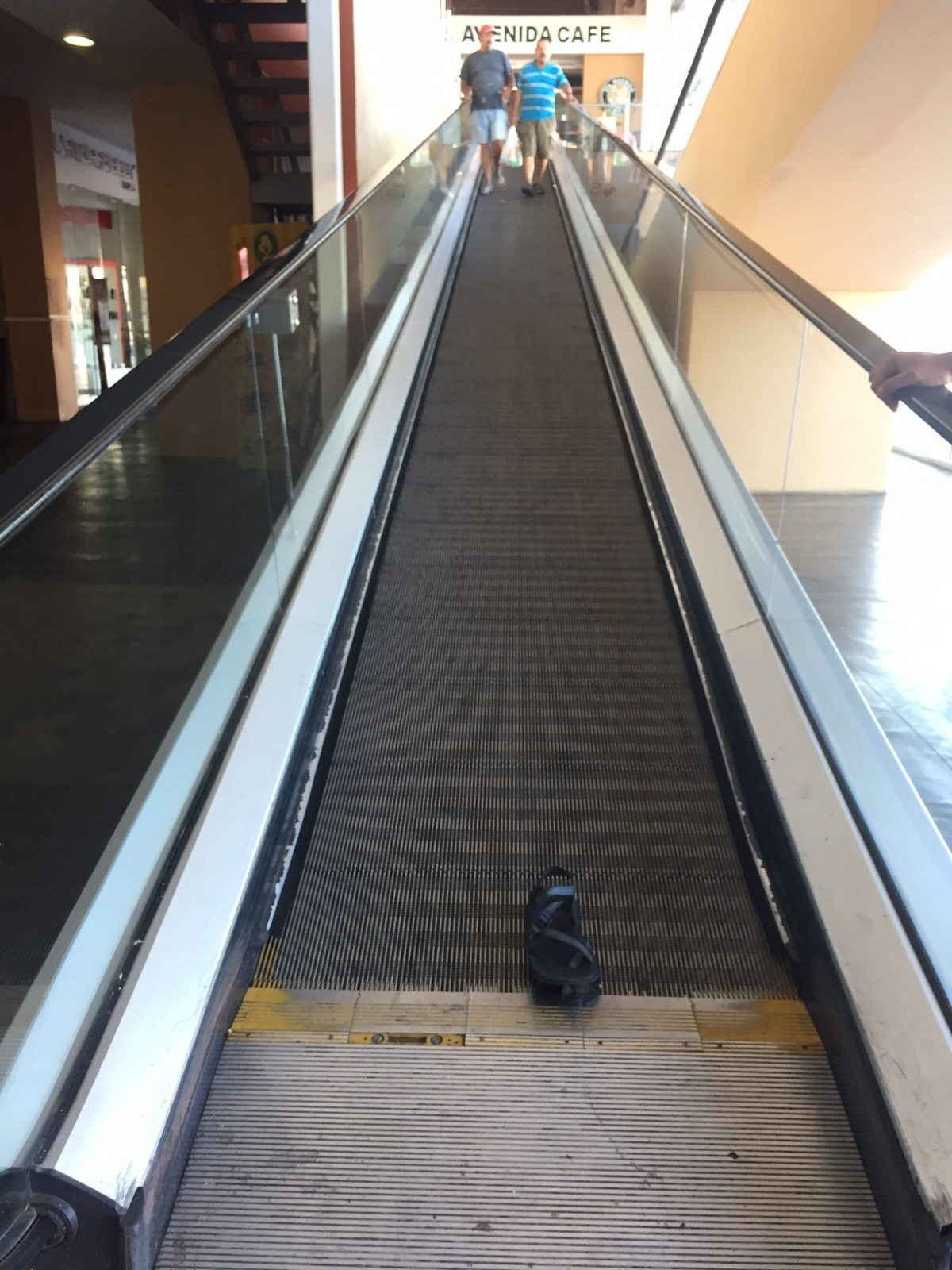 Ok, back to the search for the, slow-moving, filter-feeding shark…A.K.A. the largest known existing fish species! The Team rolled down to the malecón around 9am looking for somebody, ANYBODY, to take us out for a swim with the behemoth teddy bears. Within minutes we were approached by Carlos and the negotiation began. We had a set price in our heads of what we were willing to pay, 350 pesos or approximately $17.50 given the current exchange rate. Ol’ C was a tough one, starting at 700 pesos/person! We were insistent on getting him down ¡Nuestros amigos pagaron 350 pesos ayer! After some time, he finally gave us a rock bottom price of 400 pesos. We scoffed, walking away only to look at each other saying “Are we really not going to do this is over 50 pesos ($2.50)?!”. We were in! We’d later find out that the others on the boat paid a whopping $65 as they had paid gringo Cabo San Lucas prices. Suckers!

After a 25-minute ride, we spotted several boats on the horizon and could see snorkelers flapping in the water! Was this really about to happen! We moved in a little closer, heart rates increasing, scrambling to get our fins and snorkeling gear on. As we got closer our swimming guide, a 12 year chico named Felip, cannonballed into the murky water motioning us all to follow suit…the time had come! One after another, we clumsily back splashed into the Sea of Cortez with the idea of swimming next to the spotted beasts. Swim, swim, swim…kick, kick, kick…where did Felip go?! There he was, right next to the giant! A couple more strokes and BOOOM! The Boys were confronted head-on with the World’s Largest Fishy!  Due to the water clarity, it was difficult to see the Monsters until they were right on top of you. You’d swim and stroke as hard as you could before immediately pumping the brakes as the shark came into view trying not to run square into it. During the swim both Mitch and Justin got tail-slapped! Words really can’t describe what it felt like to join these immense creatures of the sea in their natural habitat. They were everywhere in the bay! There was easily 10-15 of them circling around. Every direction we swam we’d run smack into one.

See whale sharks was the best ending to Baja that we could have imagined. It was high on Justin’s list of things to see during our journey and this was only the beginning. We spent the next few days hanging out with Frieda and Lee and organizing our ferry to Mazatlán, which in reality was extremely simple compared to what people in the forums made it out to be.

We arrived at Pichilingue 2-3 hours in advance as instructed, which proved to be way too much time. We provided the necessary paperwork, got weighed in, paid our tax, and were on the boat. Once the bikes were secured down with straps we headed up to our room. Baja Ferries overall provided a great experience. Everything was clean, well-organized, and entirely too cold after camping in Baja for the past month. Off to bed we went. Tomorrow we’d be starting a new chapter, Mainland Mexico, stay tuned. 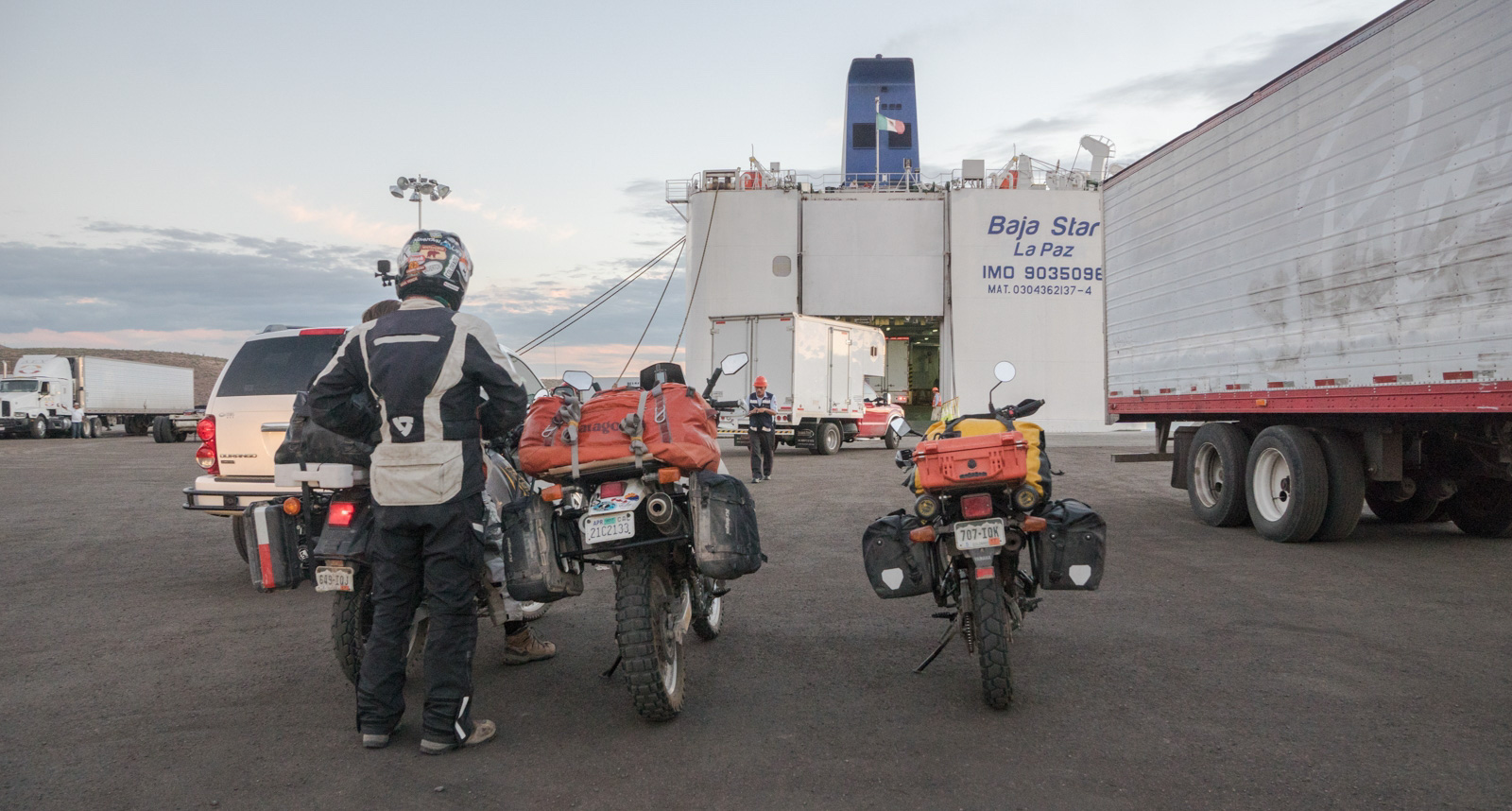 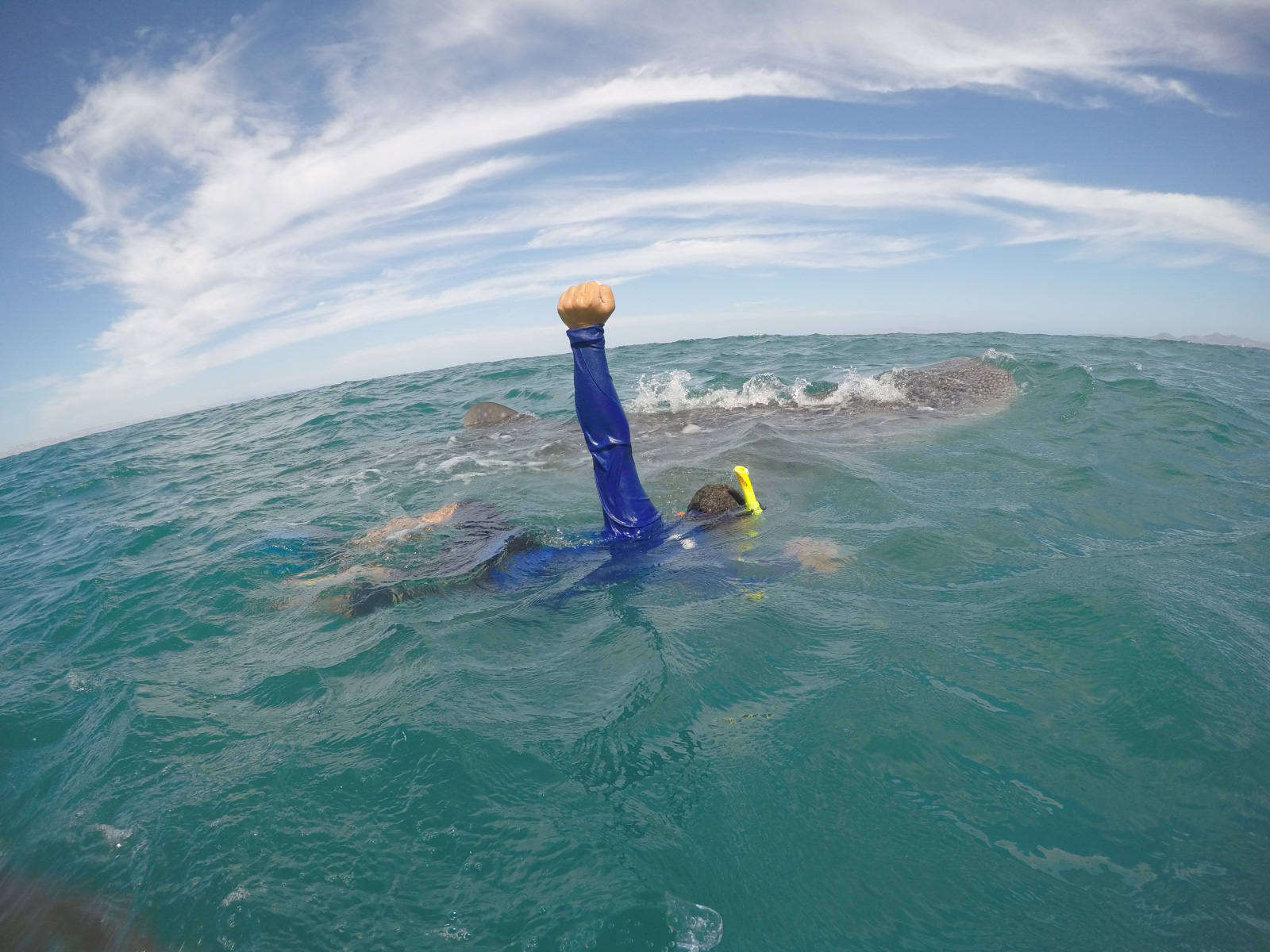 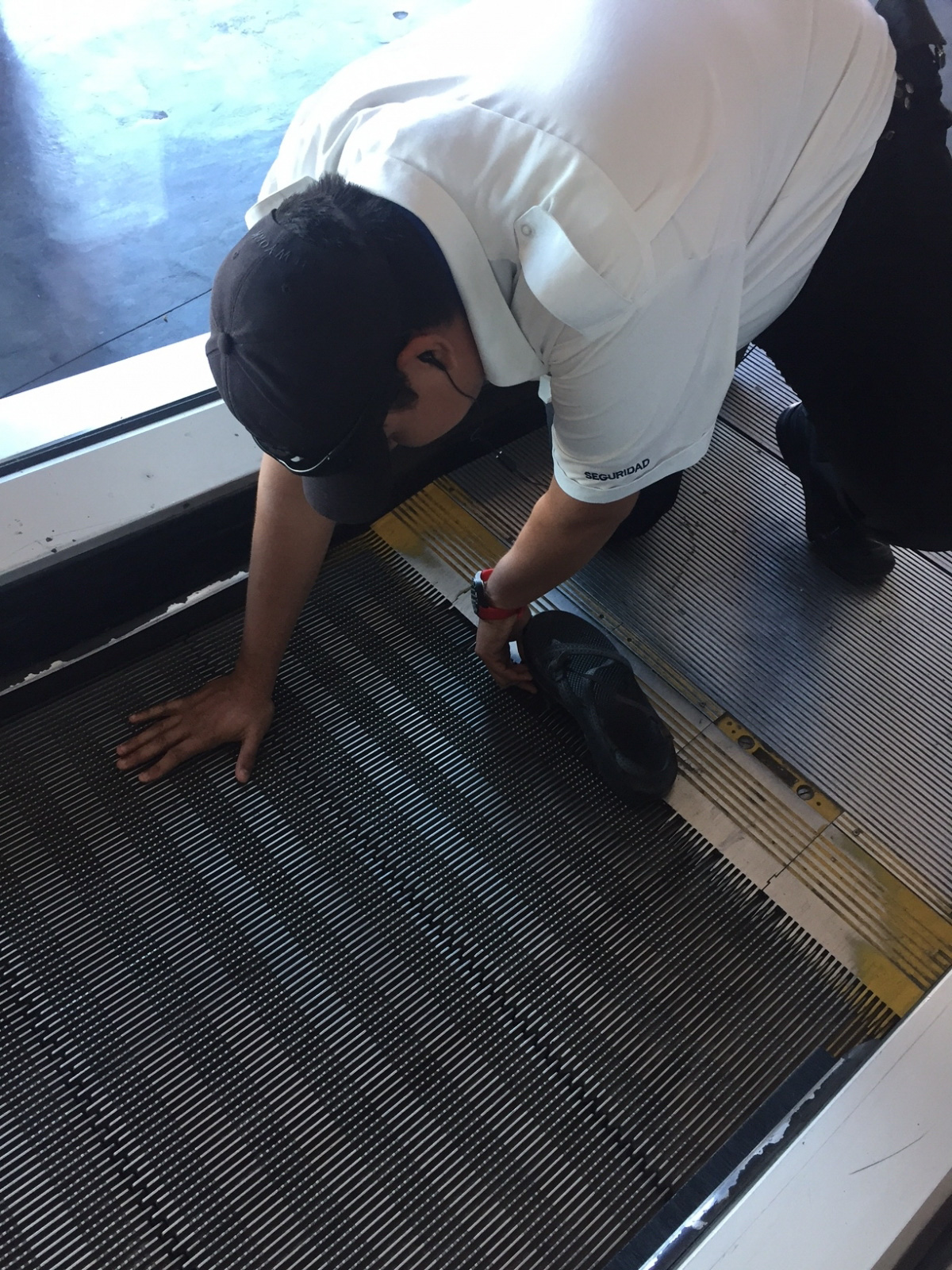 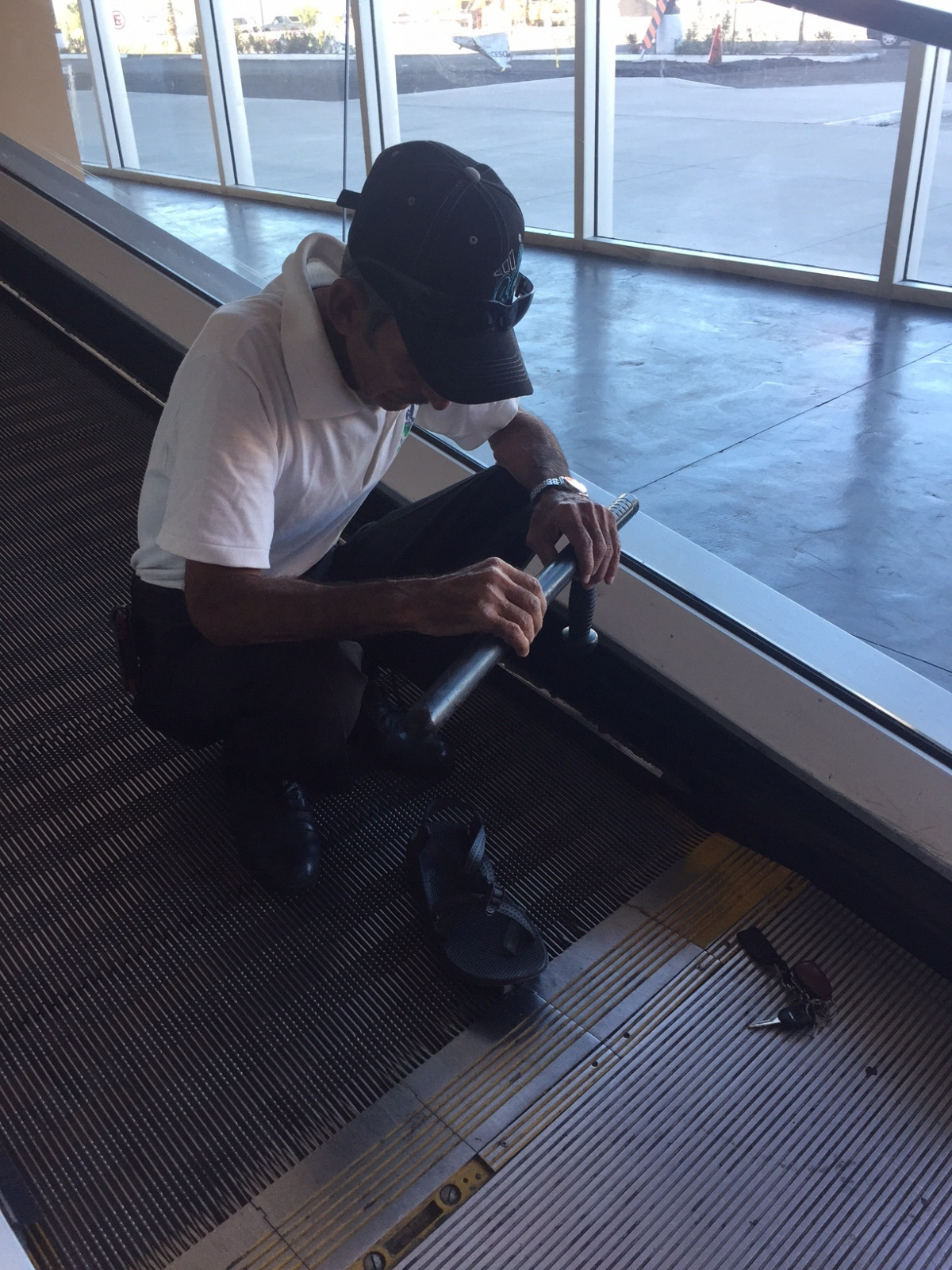 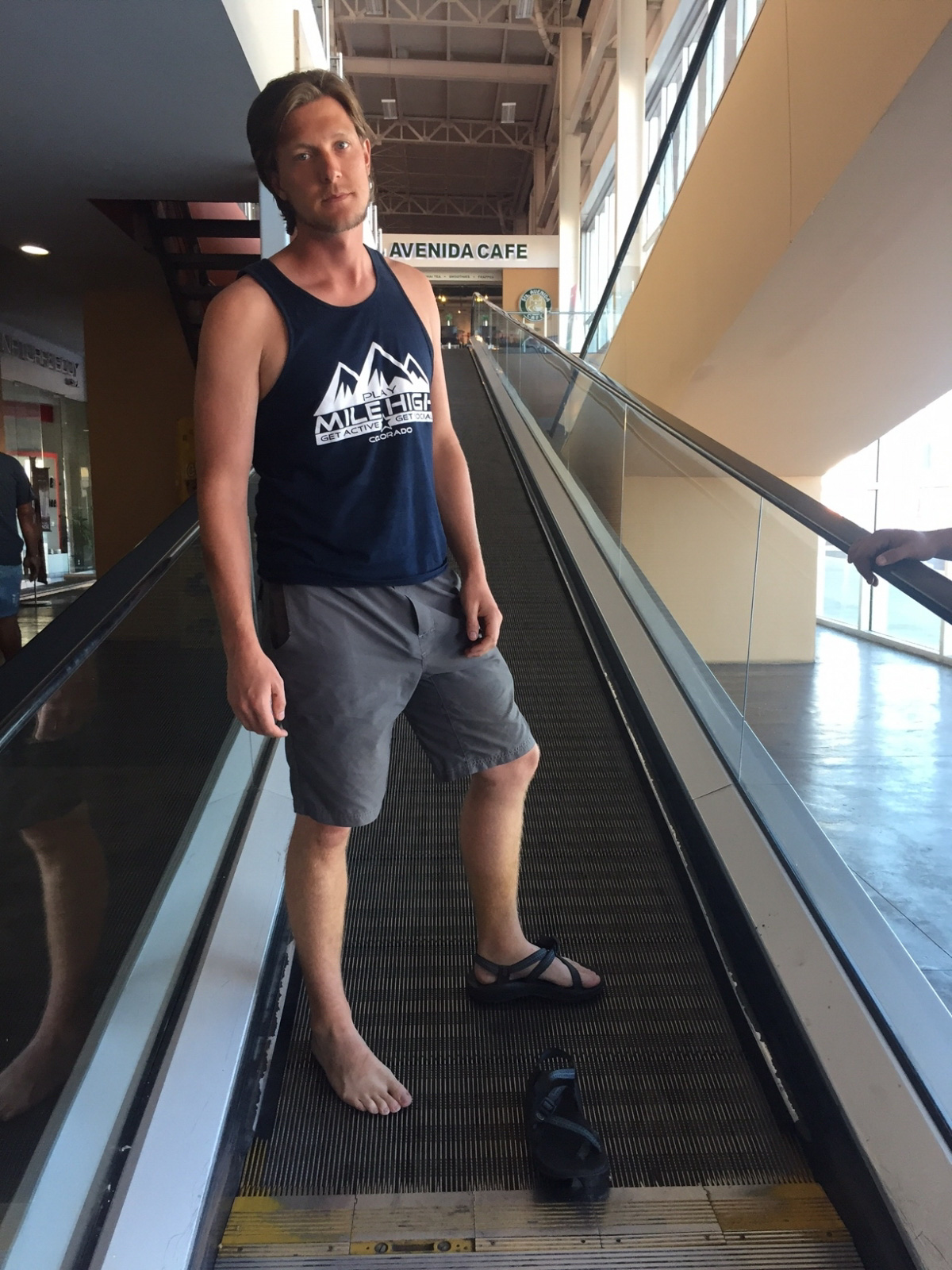 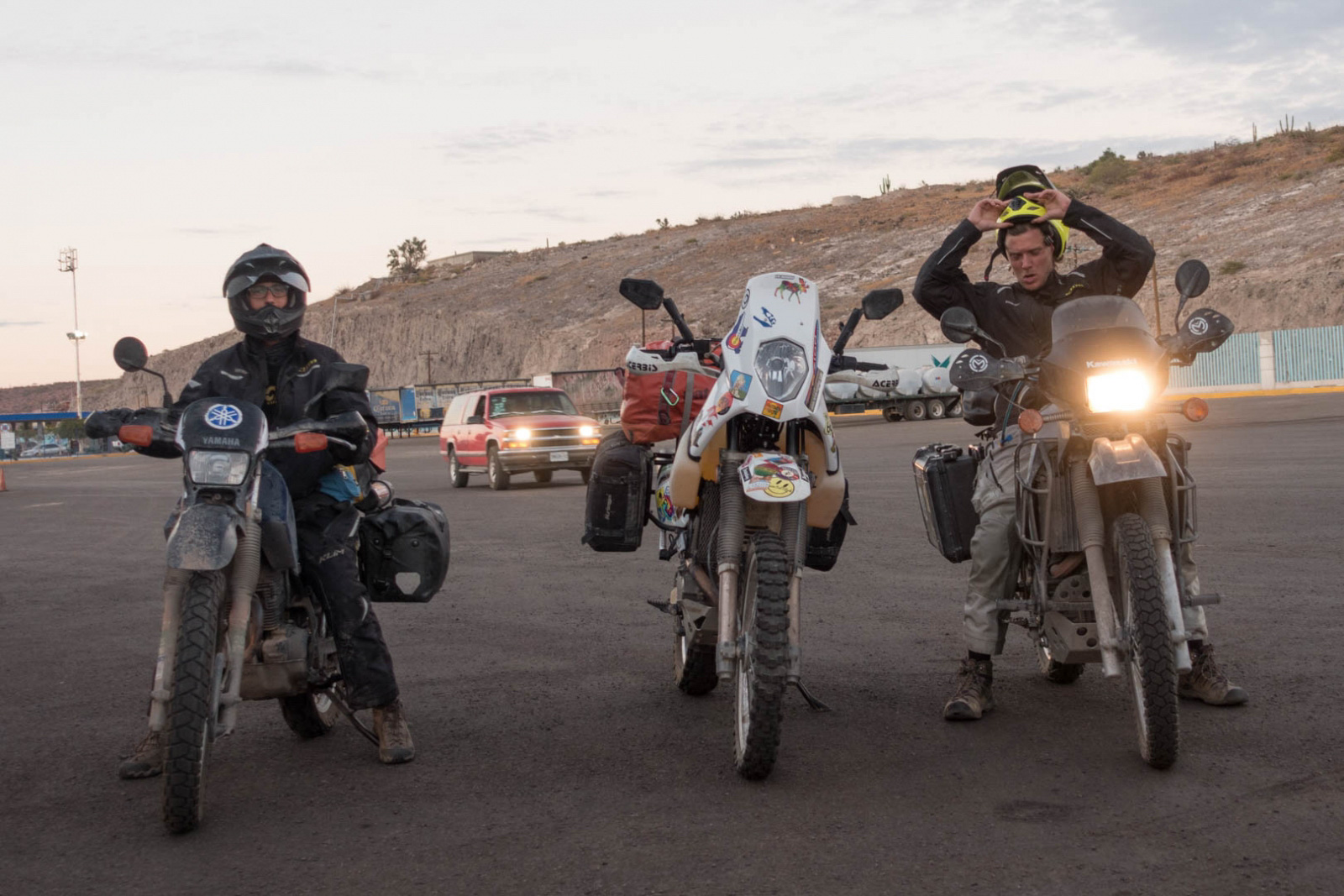 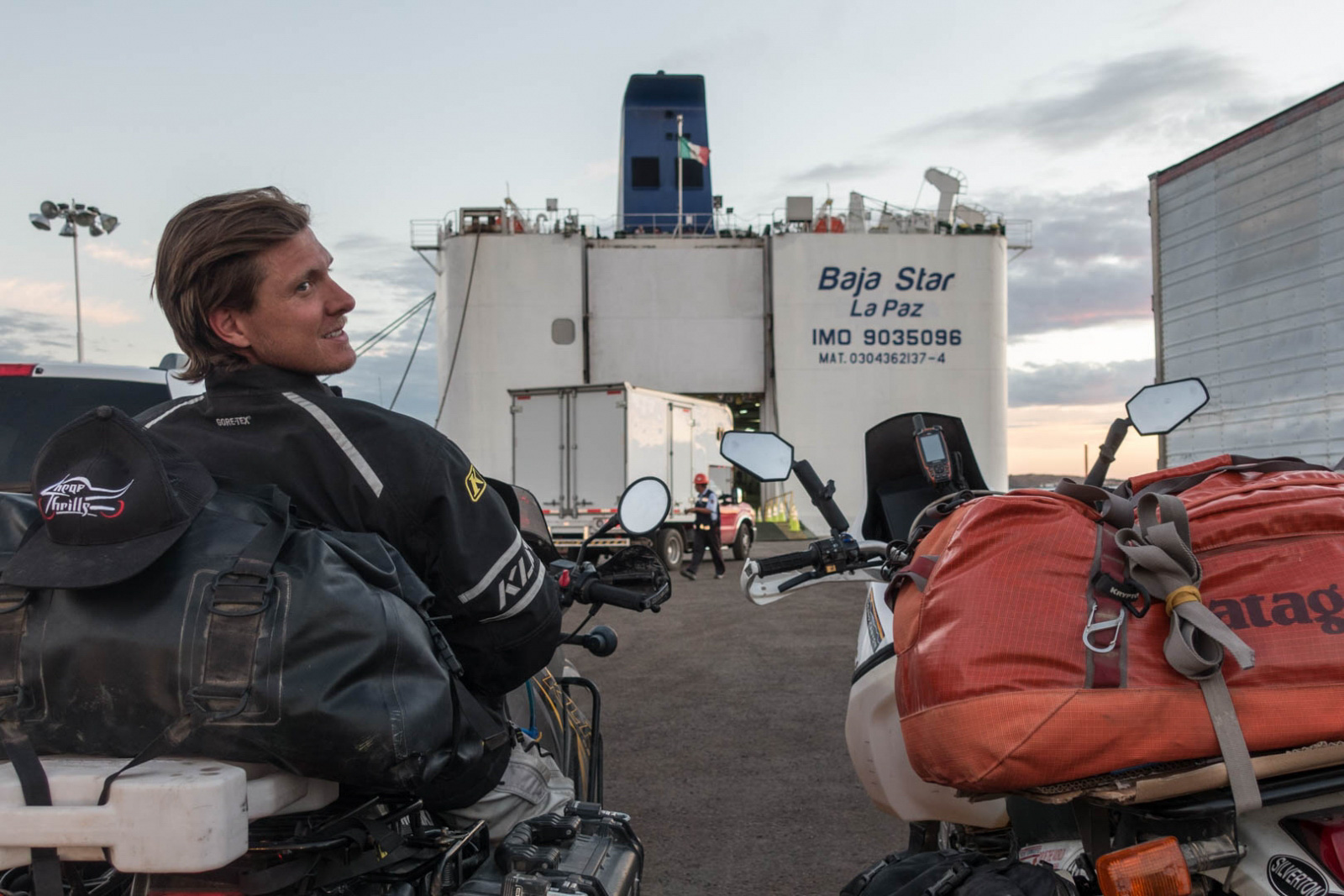 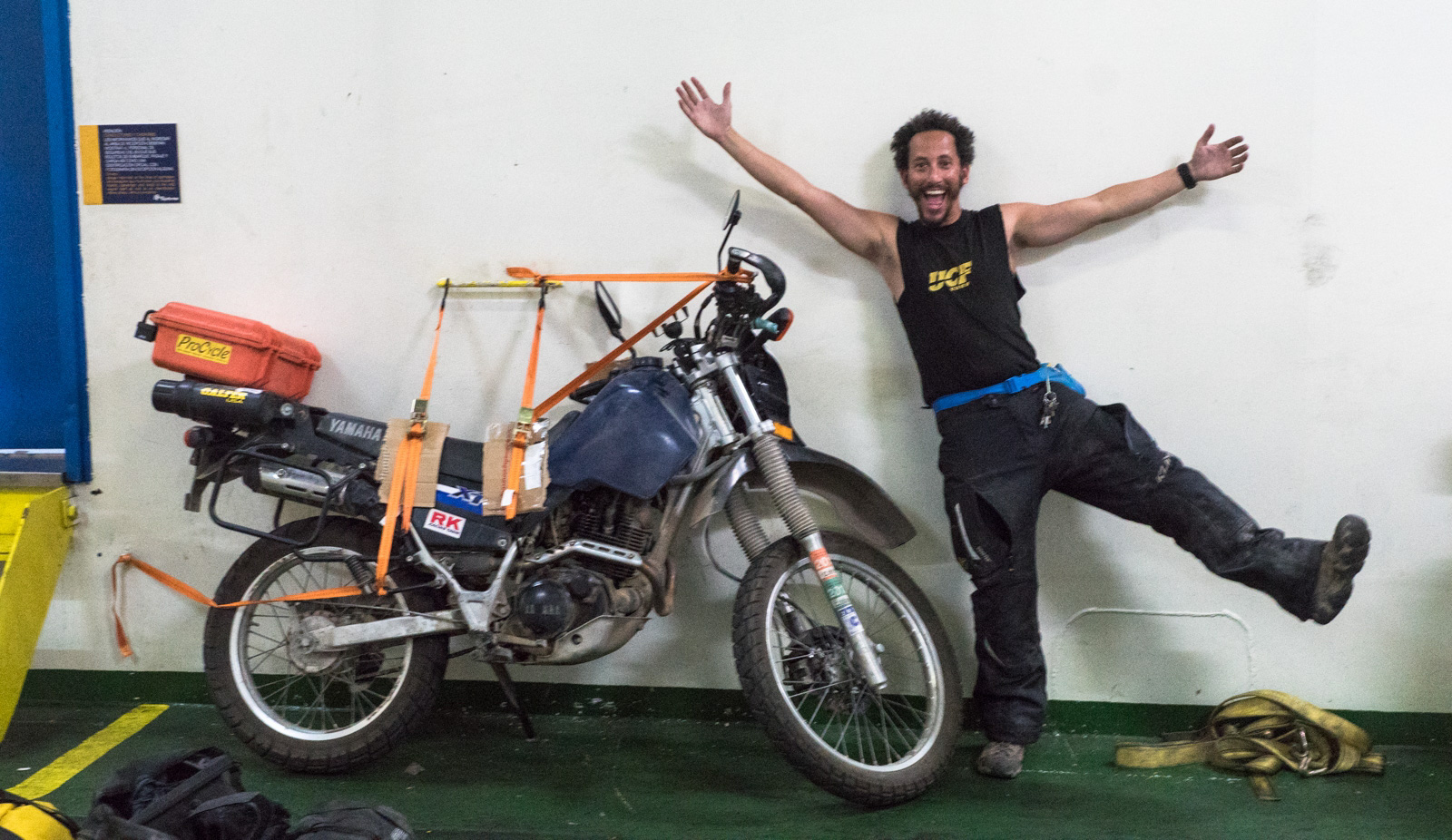 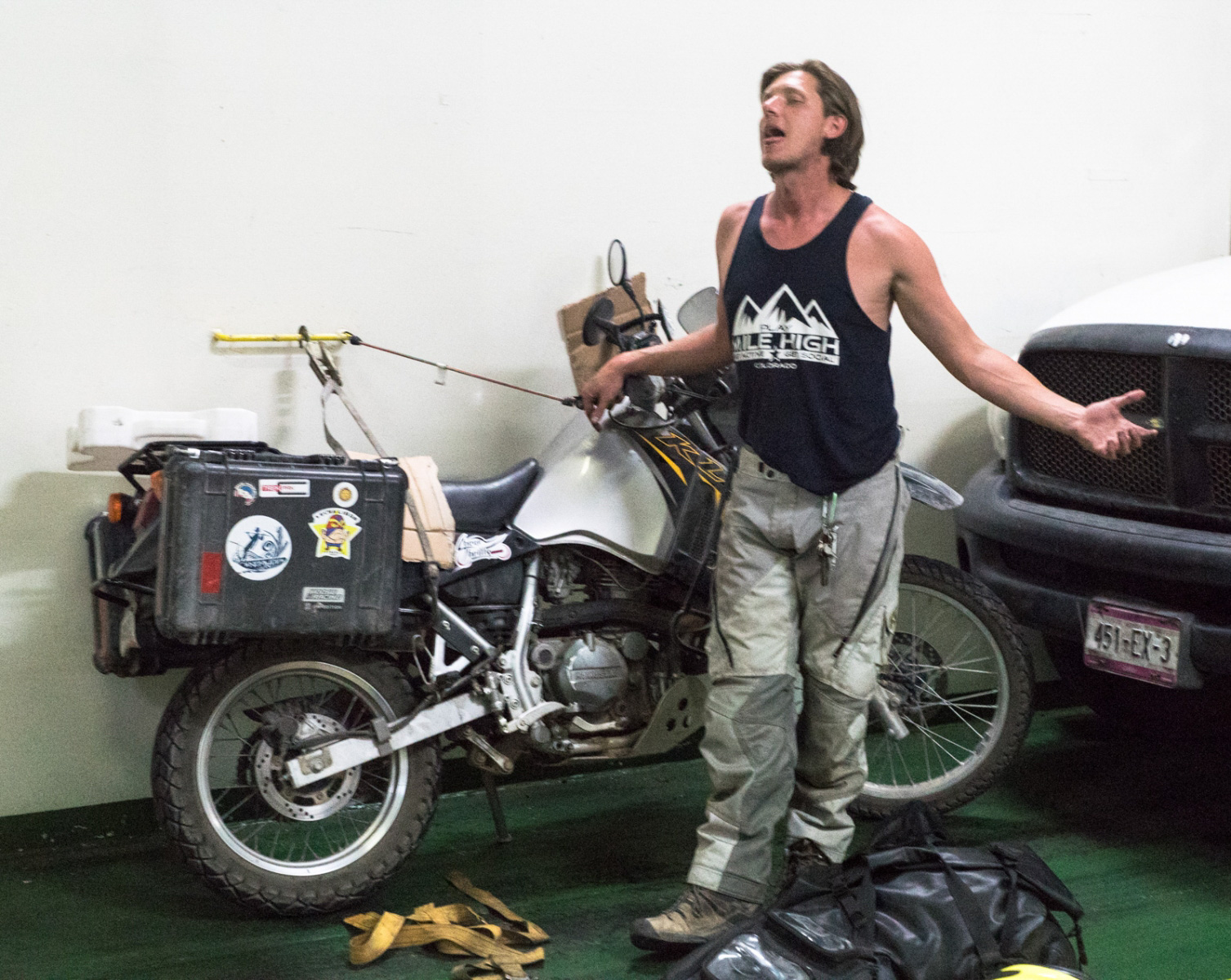 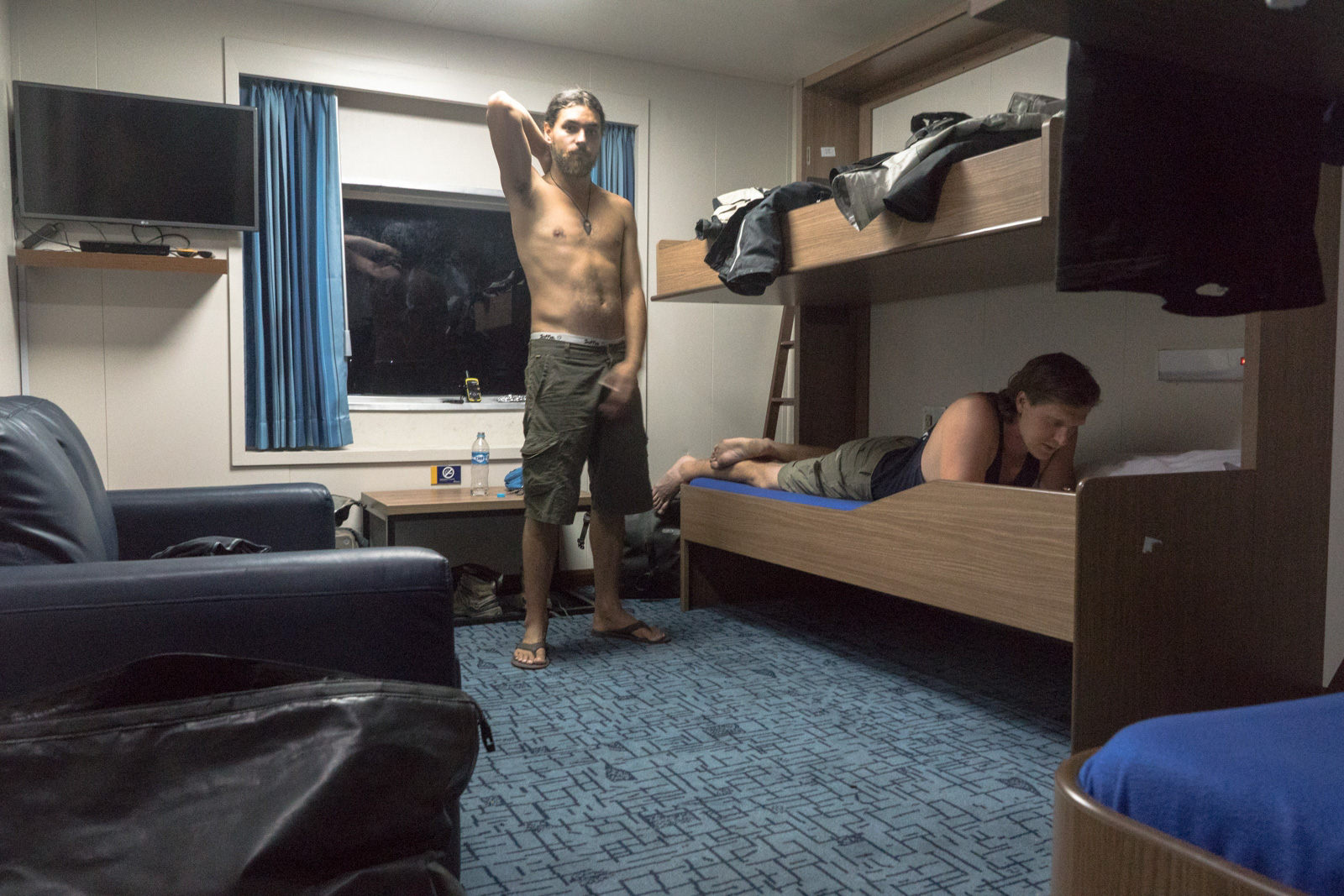