From the first time we wandered into the Valle de Cocora we were enamored by the gushing green landscape, the giant wax palms and last but not least the queso and hot chocolate. After doing some further research, we determined that there was not only the day loop (which most tourist walked) BUT there was also a multiple day trek up to the unpredictable mountain, Nevado Tolima. With Justin back in the States for a good buddies wedding, we (Mitch and Antonia) decided to give it a run.

Already knowing the first part of the hike from our previous adventure and conversing with a few guides we quickly determined to take horses to the first checkpoint, Estrella de Agua…who needs exercise anyway?! Well, as it turned out this portion of the hike had the most inclination and although our horses (Dingle and Smingle) were sweating their asses off, we had a pretty good time saving our leg strength and speaking with our guide Carlos. Although this section was pretty much straight up for 2.5 hours, Carlos didn’t even break a sweat…almost positive he had a couple gold medals in his closet! Guy was a legend! 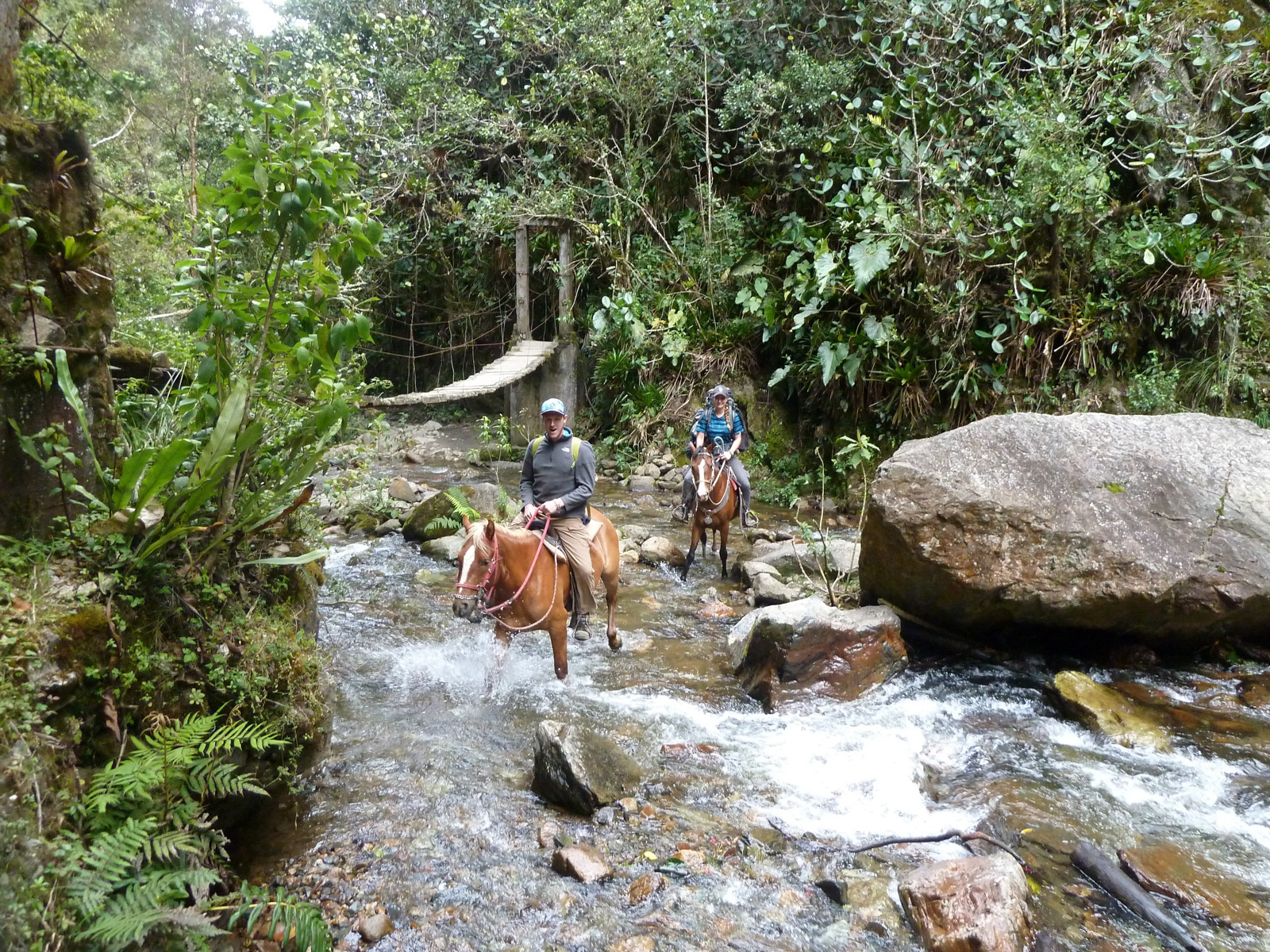 From Estrella de Agua we pushed forward towards La Primavera which is a farm that is commonly used by hikers on this trail as a resting place. Trying to save a couple dollars (we’re retired remember) we decided to wild camp a couple KM before it. Wandering off the trail a bit (not too far mom) we found a great spot to setup camp, make dinner, and have a couple drinks…because we planned to camp for 3 nights (and walk for 4) we wanted to keep our load as light as possible. So instead of bringing wine (our usual camping snack) we packed in some hot toddy’s and let me tell YOU this was a great change of pace – plus at 14,000 feet even a couple sips of rum has its desired effect. If anybody else out there has some good backpacking drink suggestions we’re all ears… 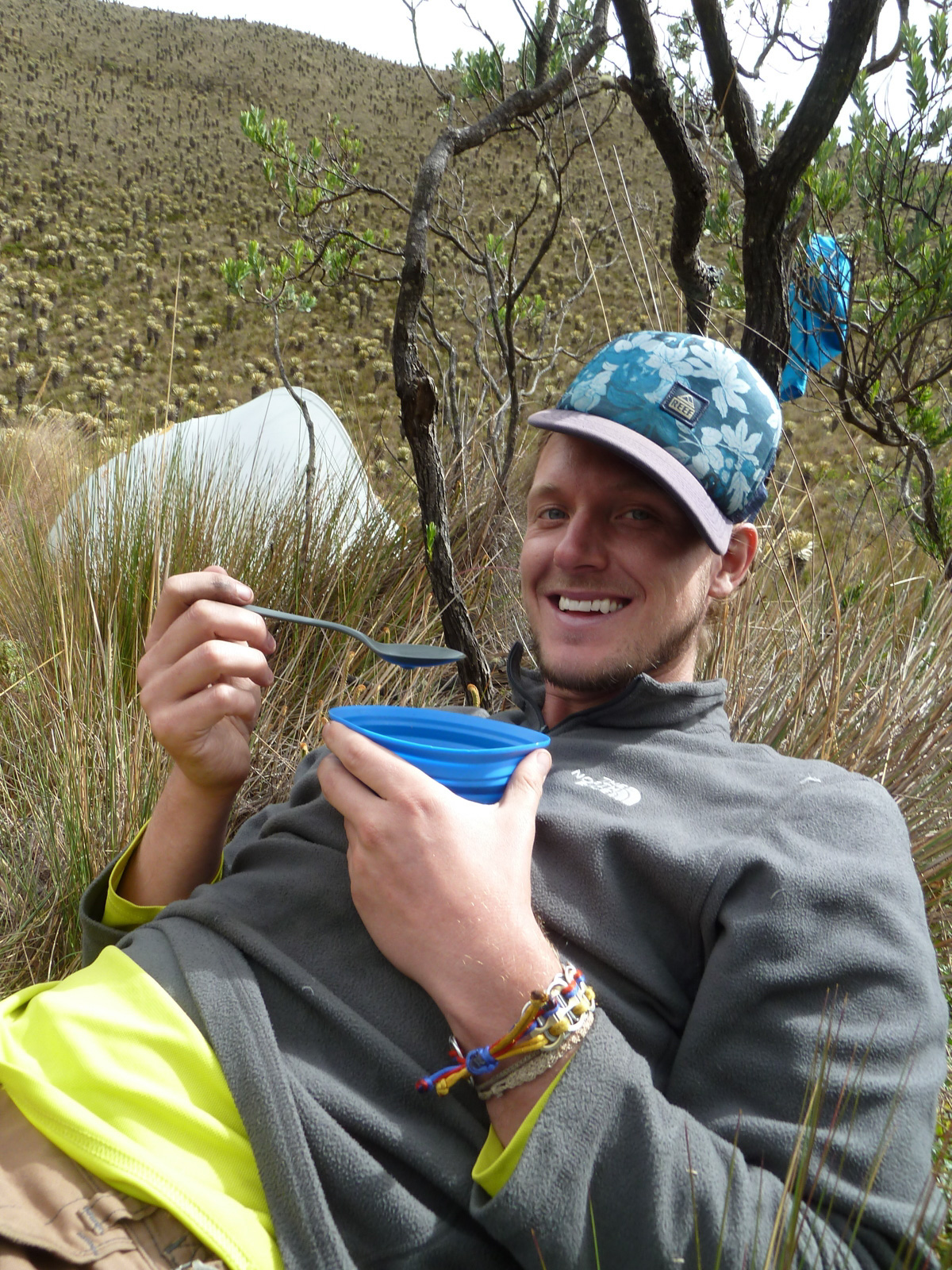 Next day, same shit (more walking) but as we got past Finca Primavera the landscape changed dramatically. We were quickly engulfed in high peaks, Frailejon (flowers that “supposedly” grow only 1 cm per year), and cows – lots of cows. Approaching Laguna Encanto, we thankfully passed a French couple that had just come down from Tolima and gave us the inside scoop on the rest of the passage.  Another night, another bowl of ramen noodles and hot toddy – does life get any better than this?! 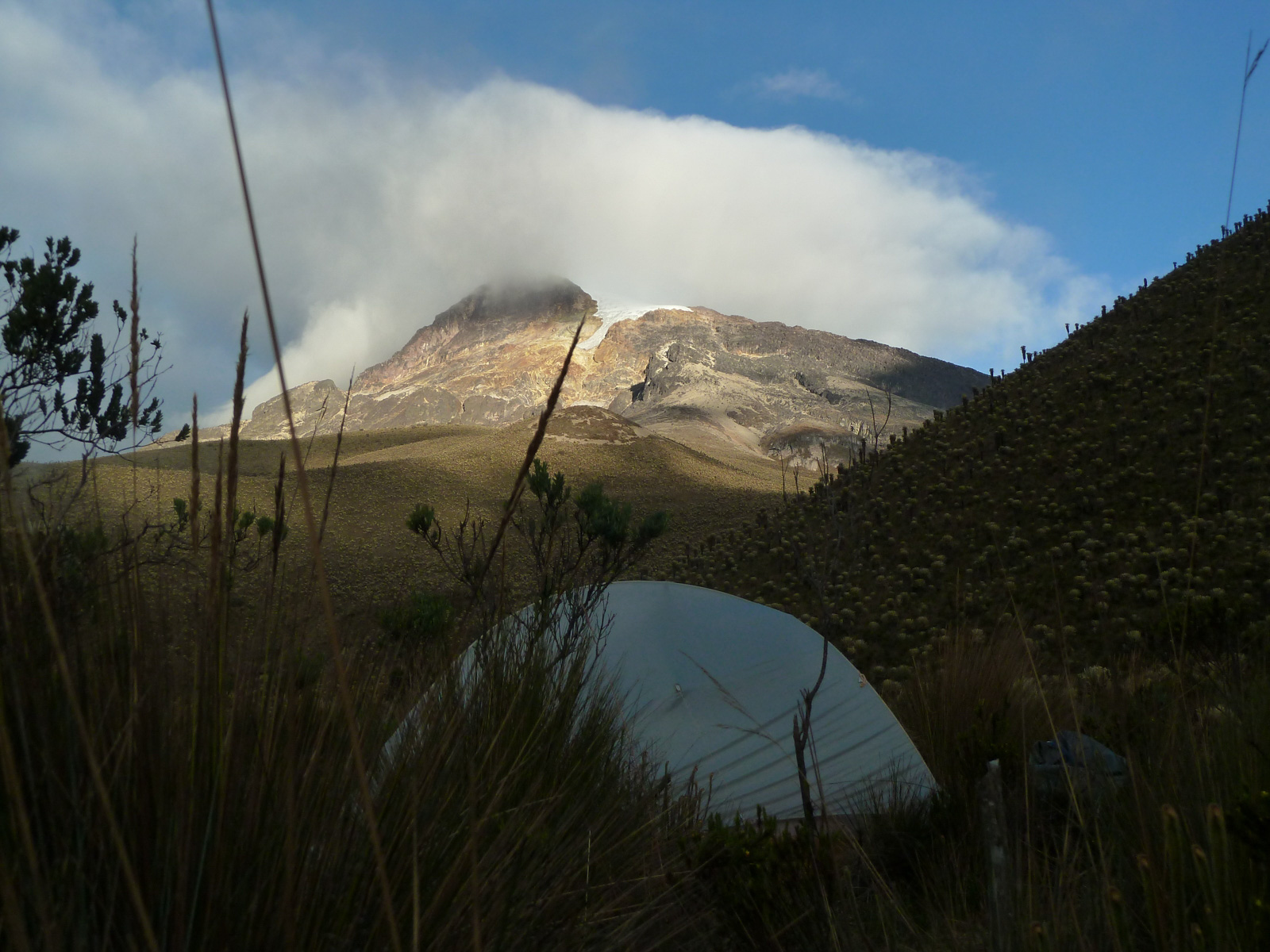 Early morning, July something or another, 2017 the summit began! Now we weren’t actually going to summit because that required technical climbing equipment BUT we did have the goal of making it to the glacier. We stumbled, huffed (and puffed) our way to 16,000 feet but with the visibility less than 5 meters and the wind howling in our unprotected faces we begrudgingly turned around ☹…as Ma always said “sometimes it’s better to be safe than sorry”. 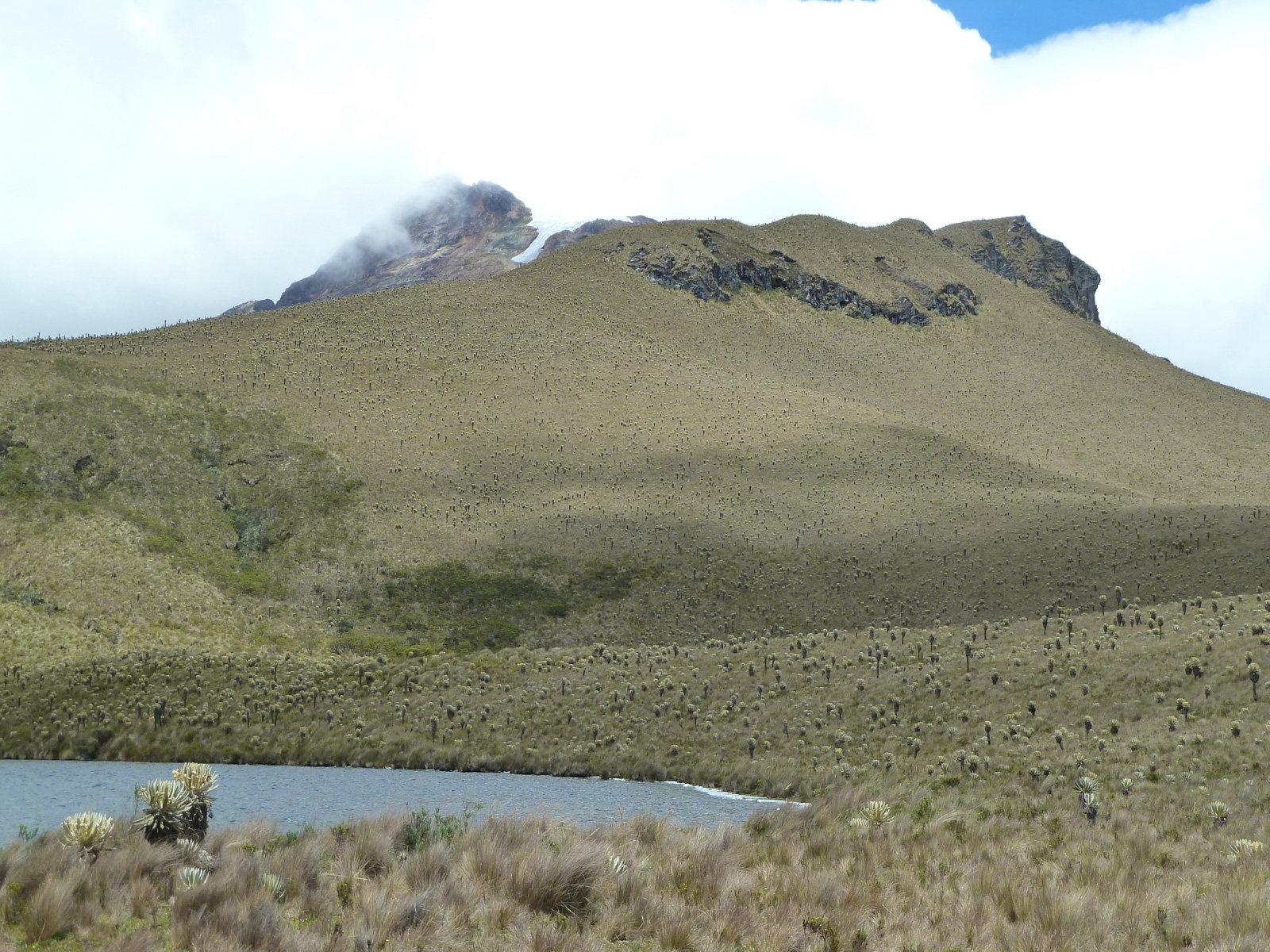 The hike down was fairly uneventful except for a couple details…the mud and the camping situation.  The MUD, how did we not mention THE MUD! Although the portion from the entrance to Estrella had more inclination than the rest of the trek (well to Primavera) was as sloppy as 4am plate of Mexican tacos. 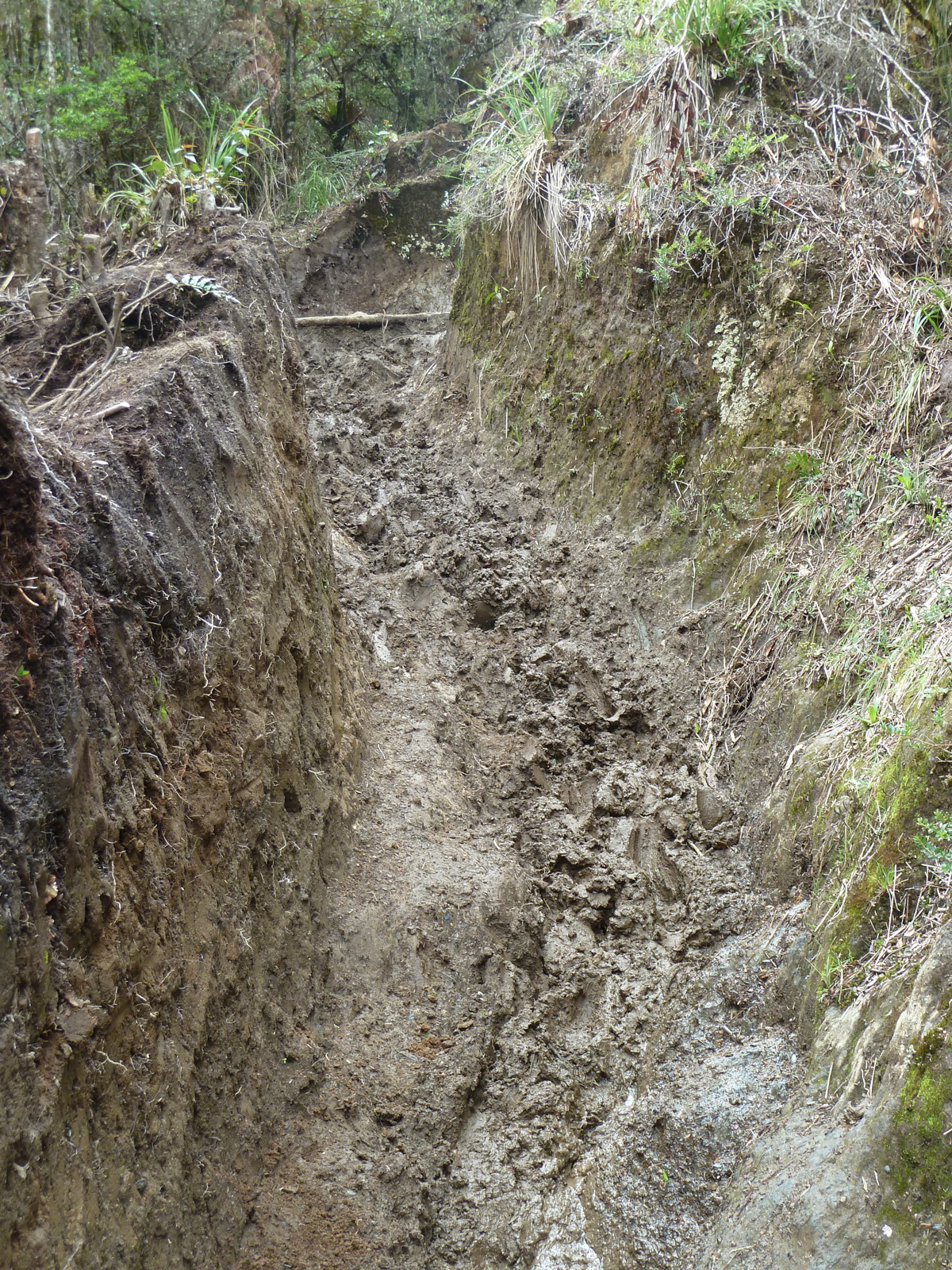 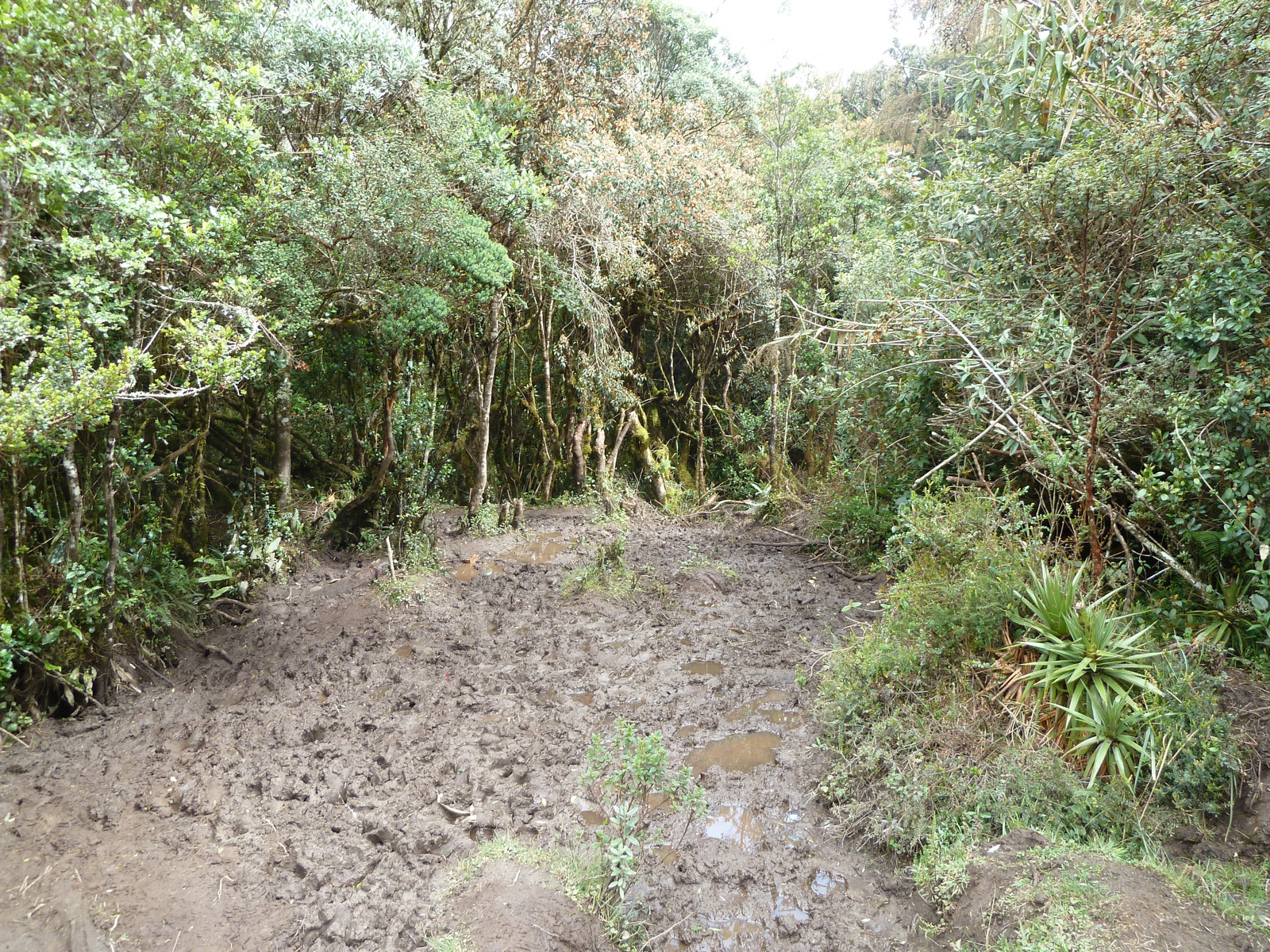 Coming into the descent we had two ideas 1) there was a great, flat, dry spot about a KM from Estrella de Agua 2) make it to Estrella de Agua.  Well option #1 wasn’t going to work because someone else had already setup camp SO with the sun setting and the muddiest of muddy section a head of us we decided to push forward to Estrella as the rain began to fall. Arriving at dusk with the rain coming down even harder we had a really disappointing conversation with the proprietor “what do mean we can’t camp here?!”. Apparently, only park rangers were allowed to stay here…WTF?! We couldn’t even setup camp in the 5 acre horse pasture in front of the property…well that’s what the lady said. With the rain coming in serious waves we found a spot close to the front gate, kind of tucked into the woods, and kind of on a SERIOUS side slope :/ we really didn’t have any other options. The only good thing we had going for us was the fact that we had hiked for 12 hours that day and were both completely exhausted! Let’s just say exhaustion won… 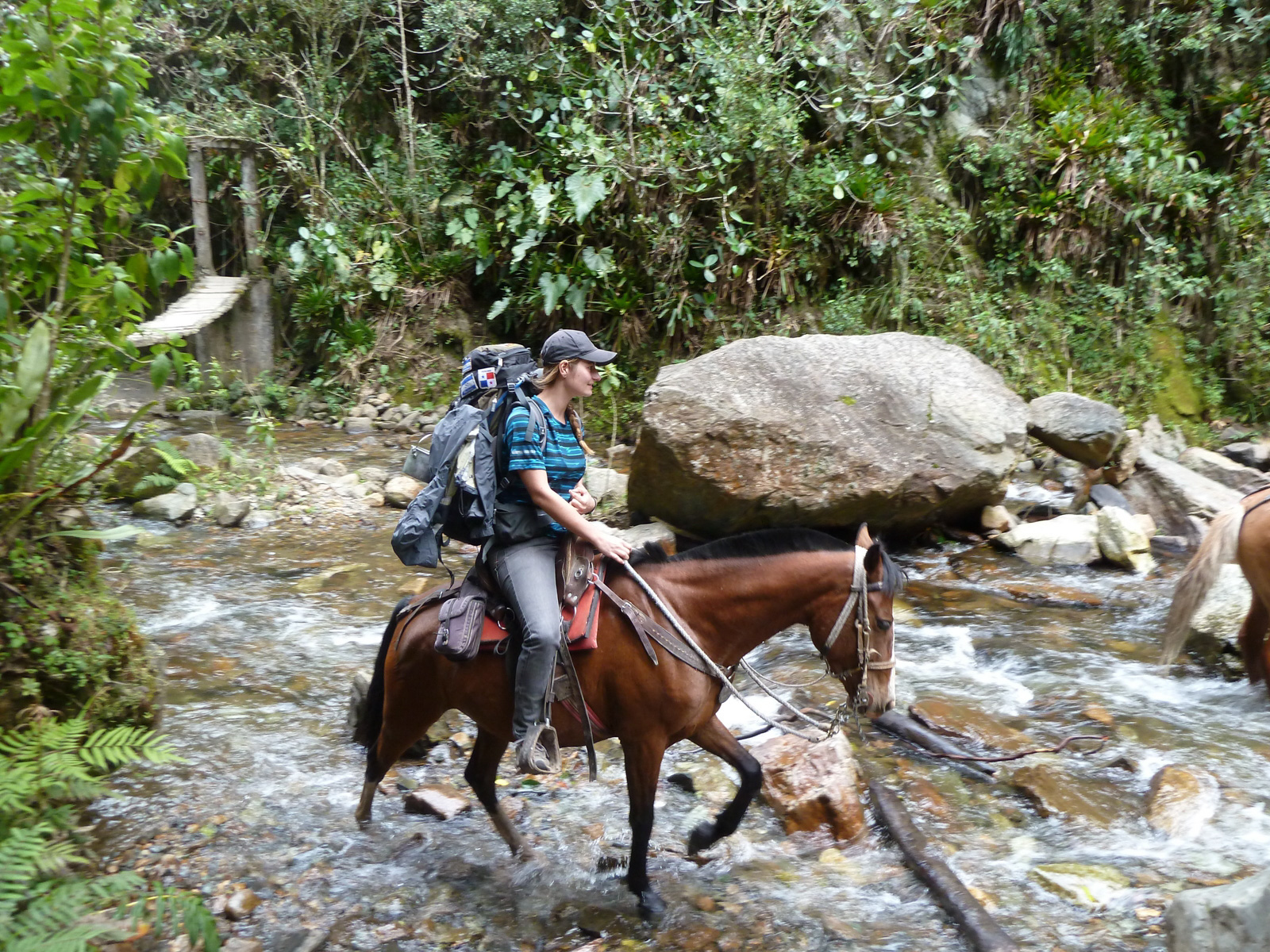 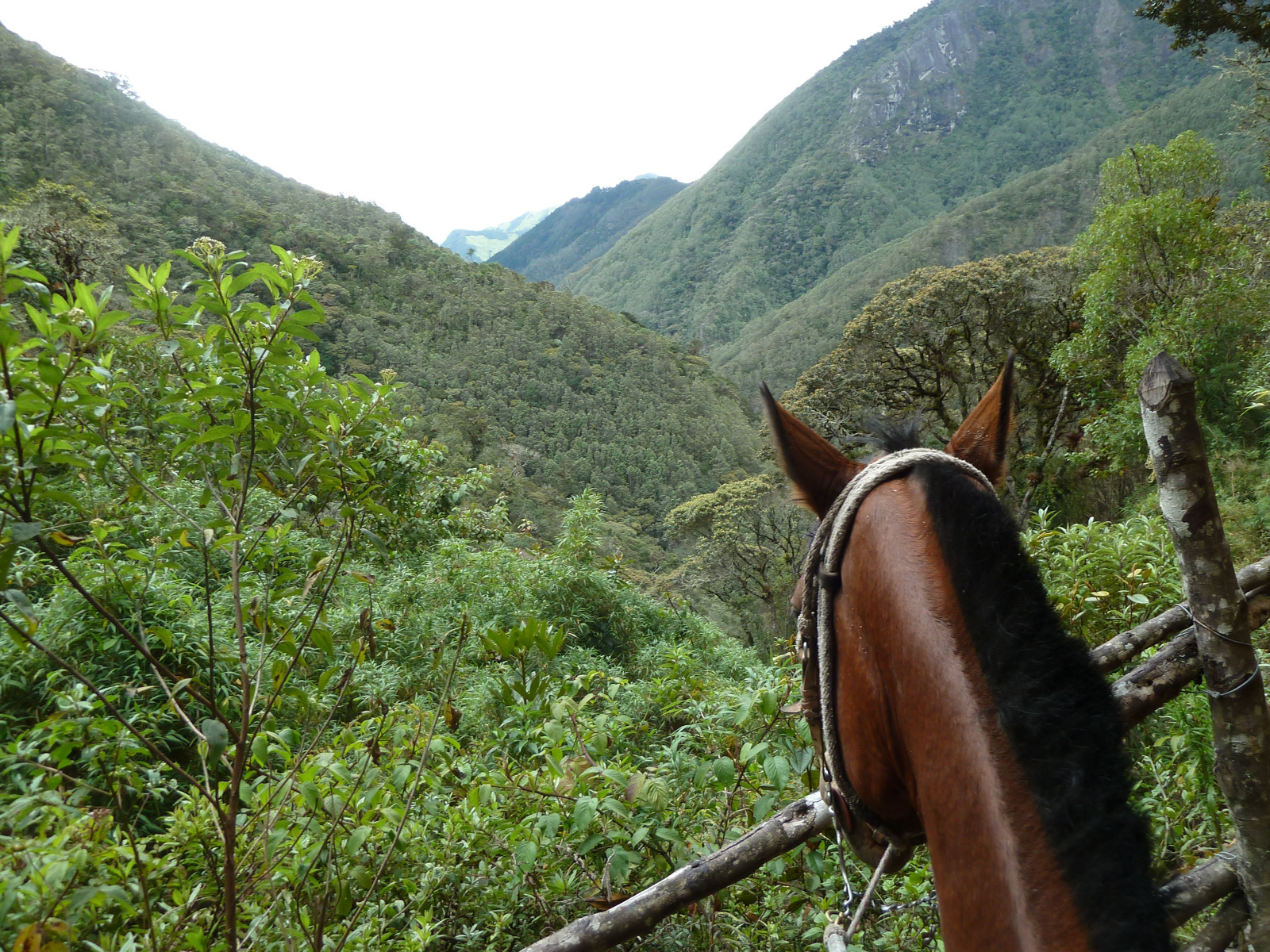 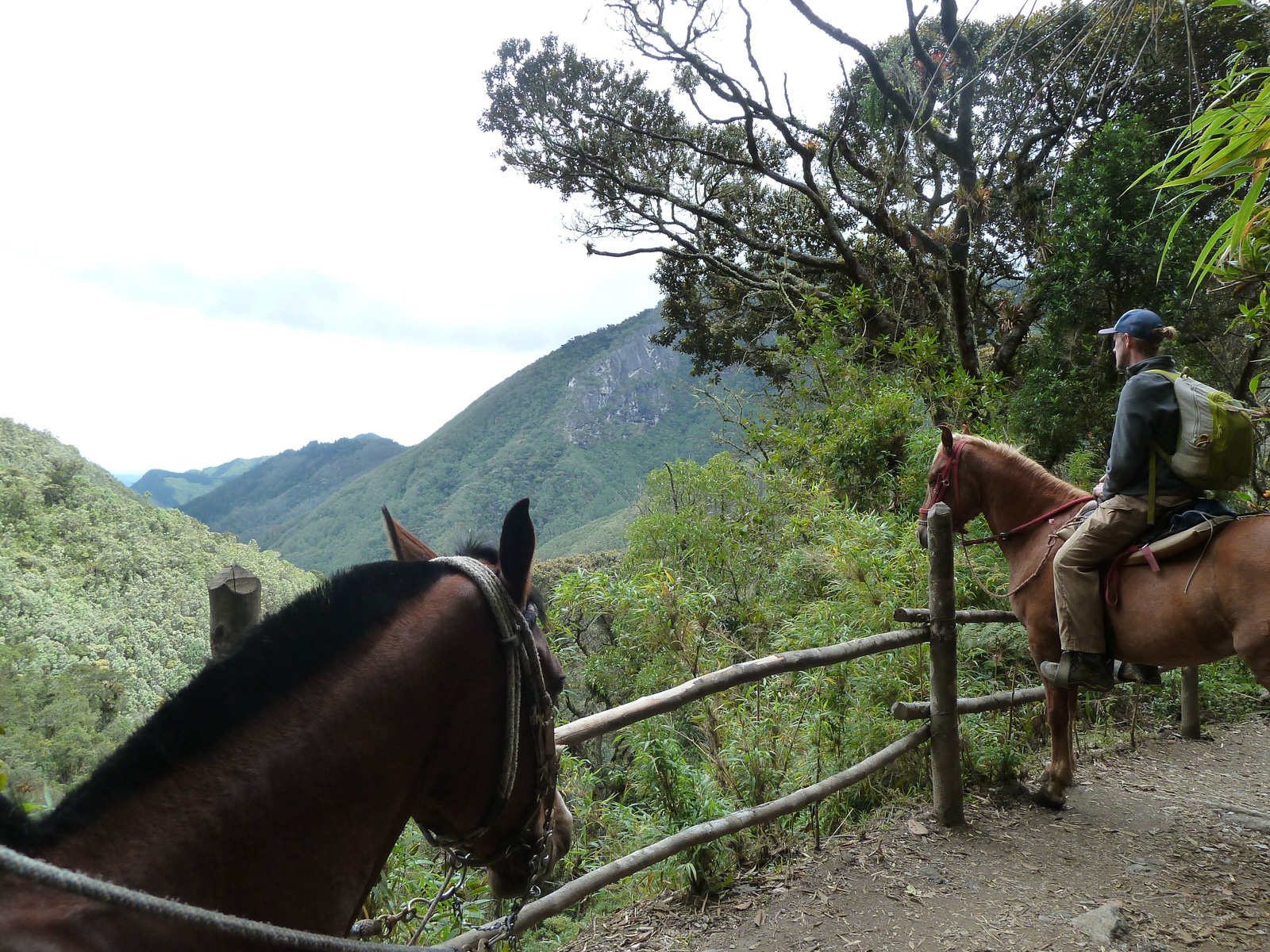 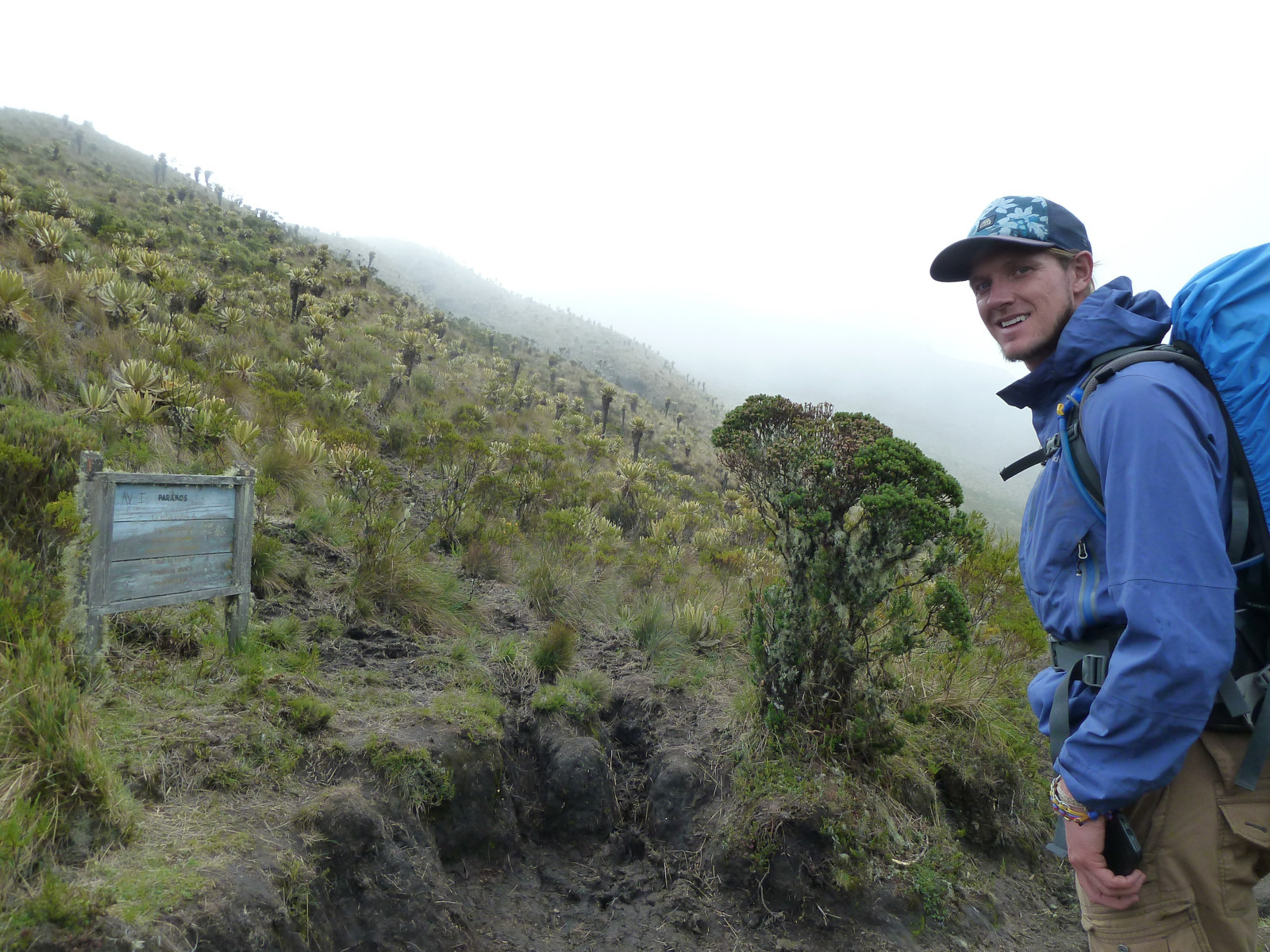 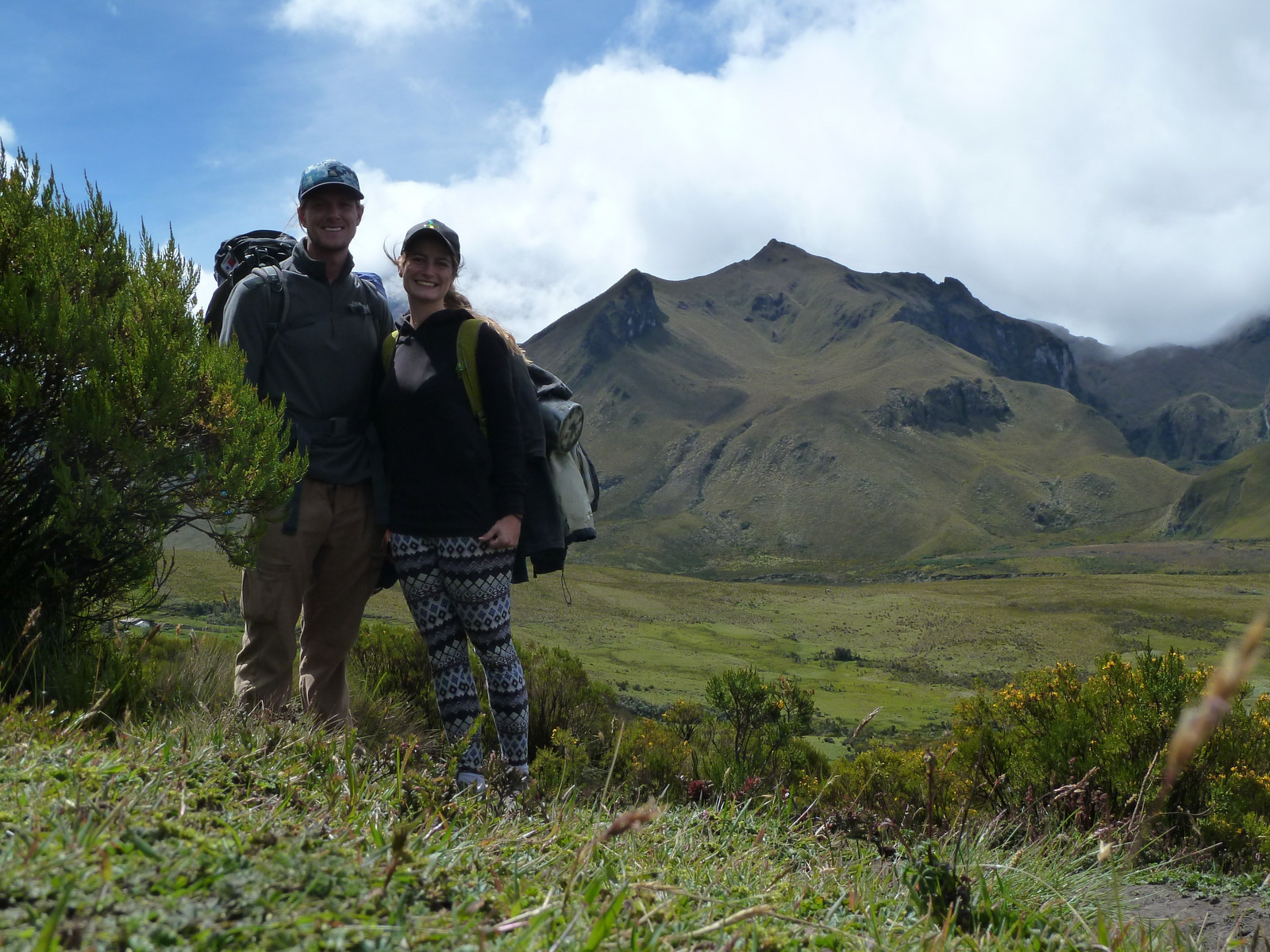 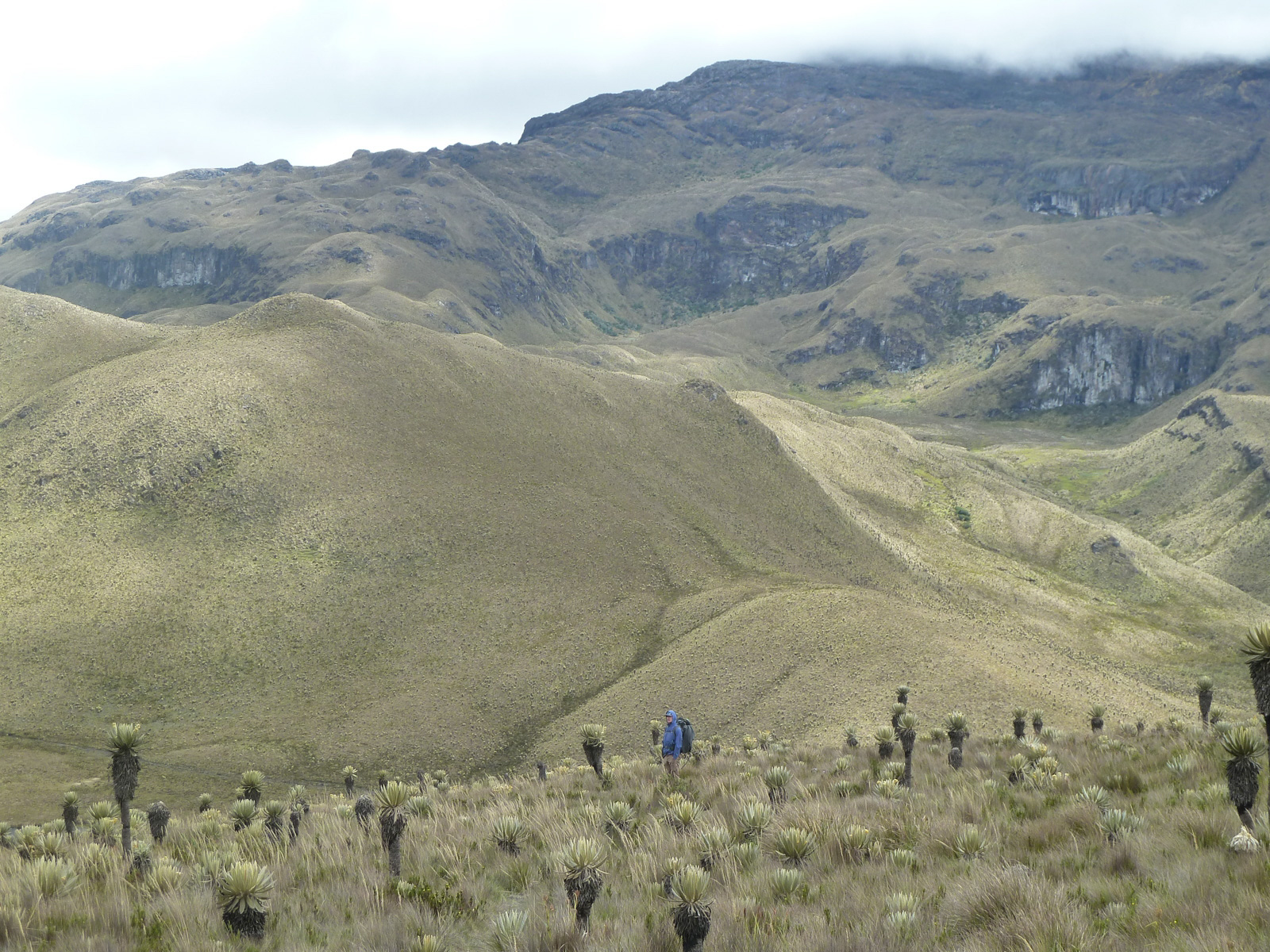