Medellin has been at the back of our minds since we left the States (thanks Narcos, Pablo Escobar, and EVERY damn traveler we’ve met coming north). Needless to say, the bar had been set very high and for very good reason. With stunning views, passionate people, and one of the biggest plates of MEAT (bandeja paisa) you can find anywhere, what was there not to love?! That coupled with the coffee region which is regarded by many to be their favorite region in all of Colombia (mainly due to its beauty, temperate climate, and coffee ALLLLL the coffee). This next leg of the trip was sure to be one of the best!

Arriving in Medellin, we set ourselves up in a nice AirBnB in the Laureles neighborhood, we’re gonna be here for a while. The common theme we heard running into other backpackers (and talking to buddies a head of us) was “Medellin, I could ACTUALLY live there!”. Hmmm well those are some pretty high expectations, we’re going to have to DIG-IN and find out for ourselves! This was evident upon our arrival. Weaving in and out of traffic we got non-stop honks and the occasional “Bienvenidos!”. The people of Medellin were excited to see us! 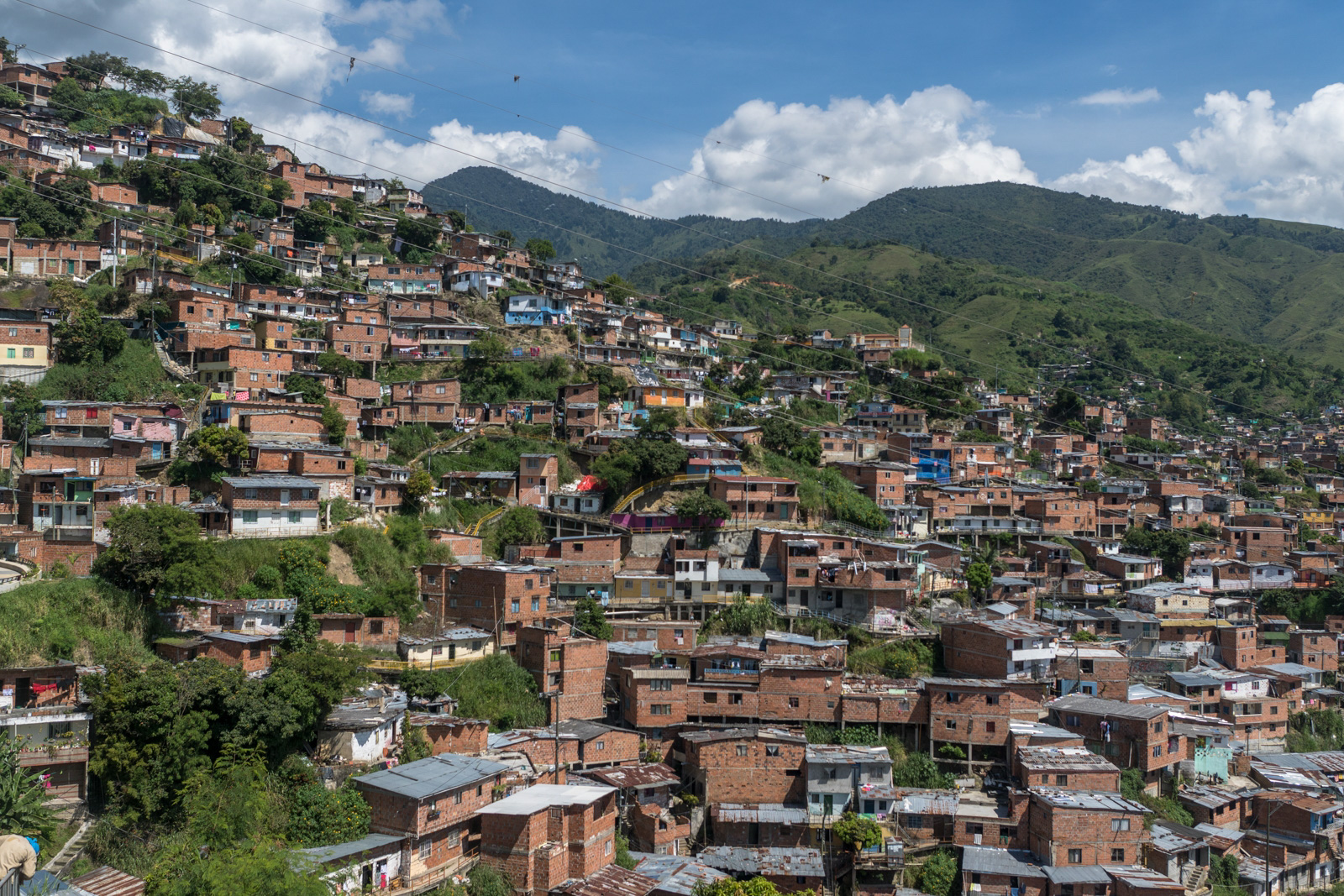 First things first, let’s do ALLLL the FREE shit we can! Only kidding (kinda of), but there are some AMAZING free city tours in Medellin. The first tour we went on was the Comuna 13 Tour, which was all about Comuna 13. Man, did we learn a lot! The tour was given by three locals and they all had their own unique history. They dove deep into their personal experiences regarding the violence in this area, conversed about the local art and food. The main highlight was the escalators they had installed in place of stairs in this neighborhood to make commuting more efficient. This barrio is a shining example of how resilient Colombians are and how willing they are to change for the better in just a few short years. 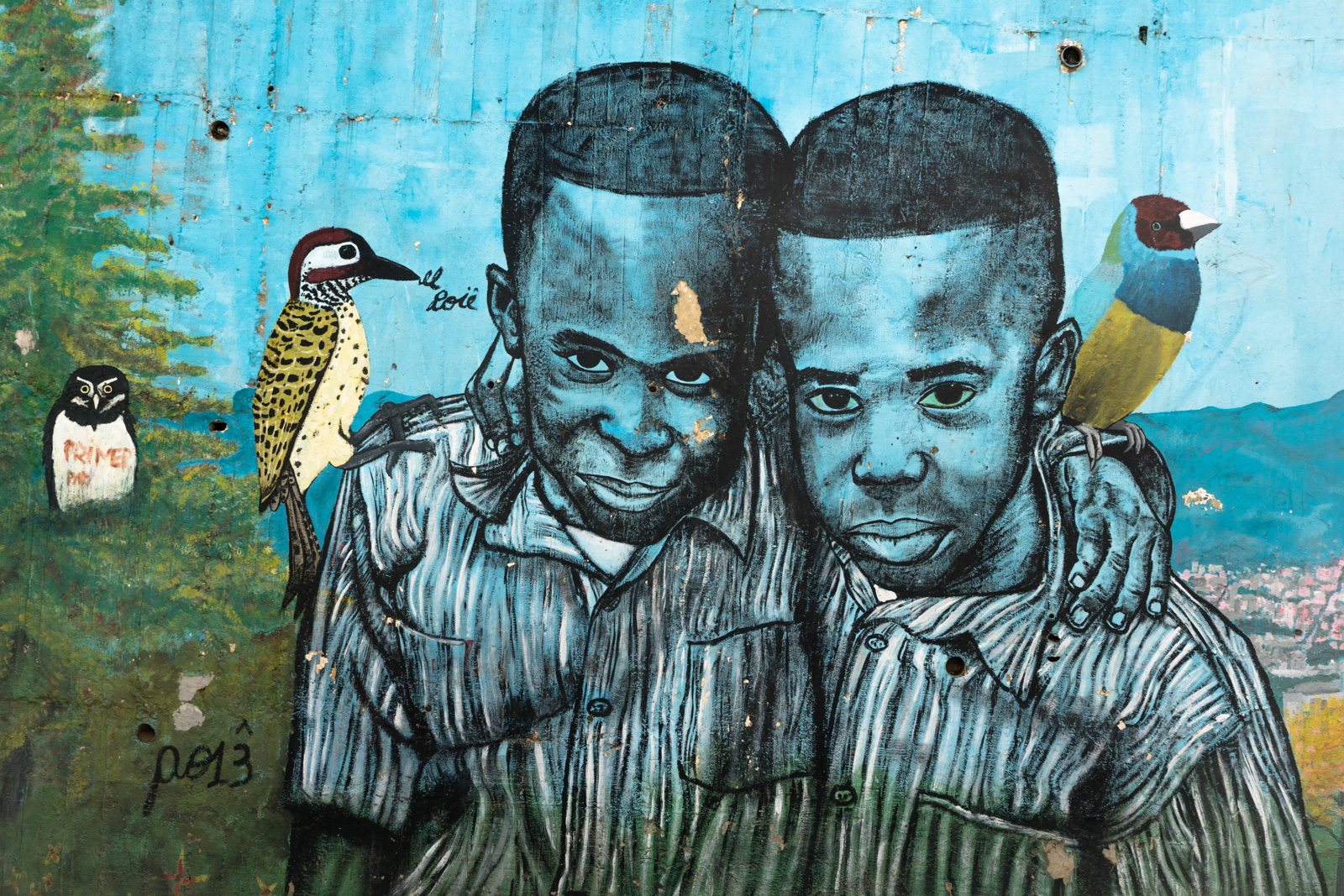 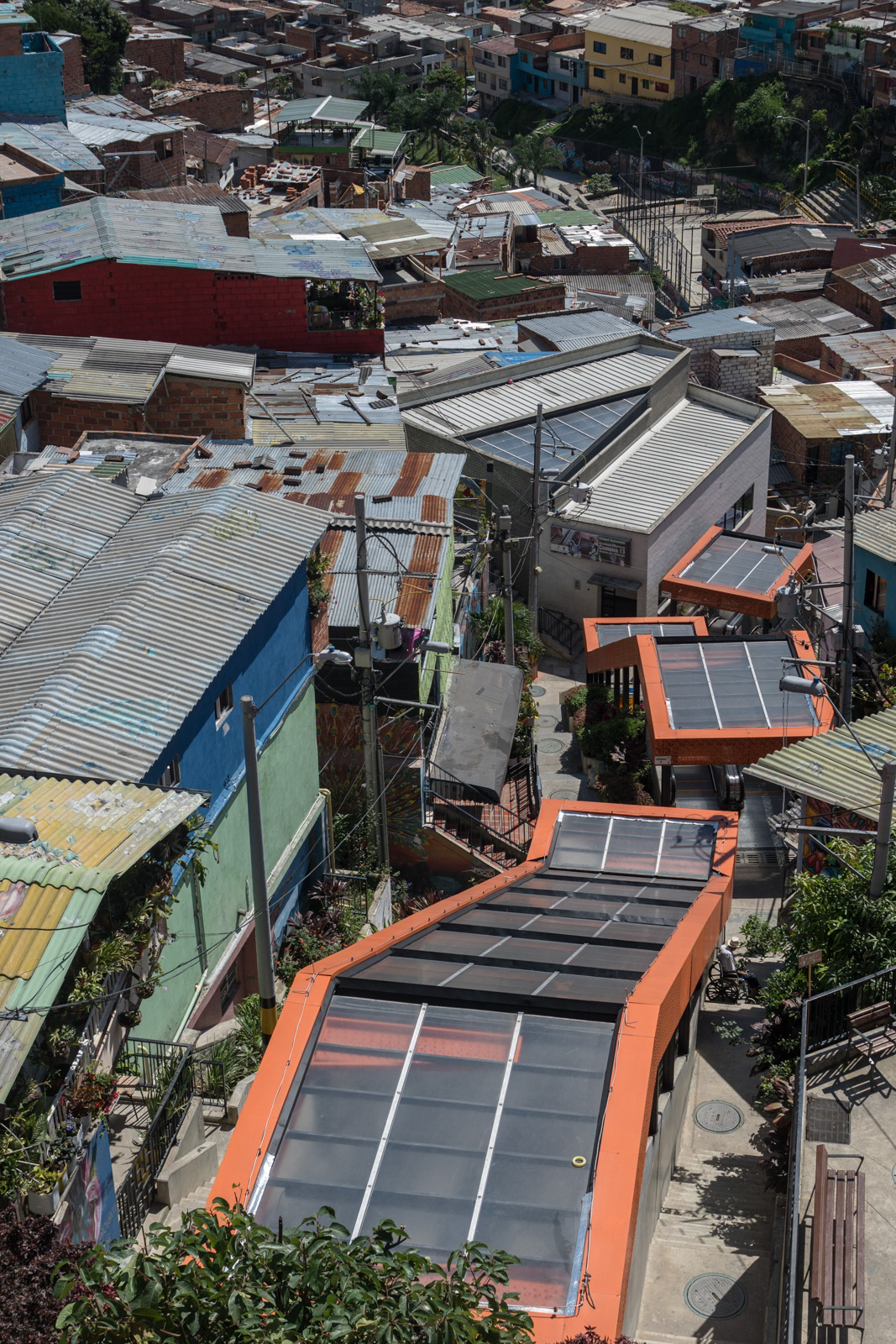 The second tour was the “World Renown” Real City Tour. Our tour guide, Marabel, was quite the character (although she did mention tipping her one too many times). Her personality was truly Paisa (someone from a region in the northwest of Colombia, including the part of the Andes in Colombia. The Paisa region is formed by the departments of Antioquia, Caldas, Risaralda and Quindío). She was fun to be around and EXTREMELY knowledgeable about Colombia and its history. The tour mainly focused on the downtown or Centro area. The streets were bustling with markets and people. We explored various historic landmarks and areas of cultural significance in Medellin. Best part of the tour was all the locals that jumped in from time to time. Most of them were drunk, hilarious, and above all else WELCOMING. Marabel’s parting gift to us was showing us where to buy tickets to our first futbol (soccer) match! 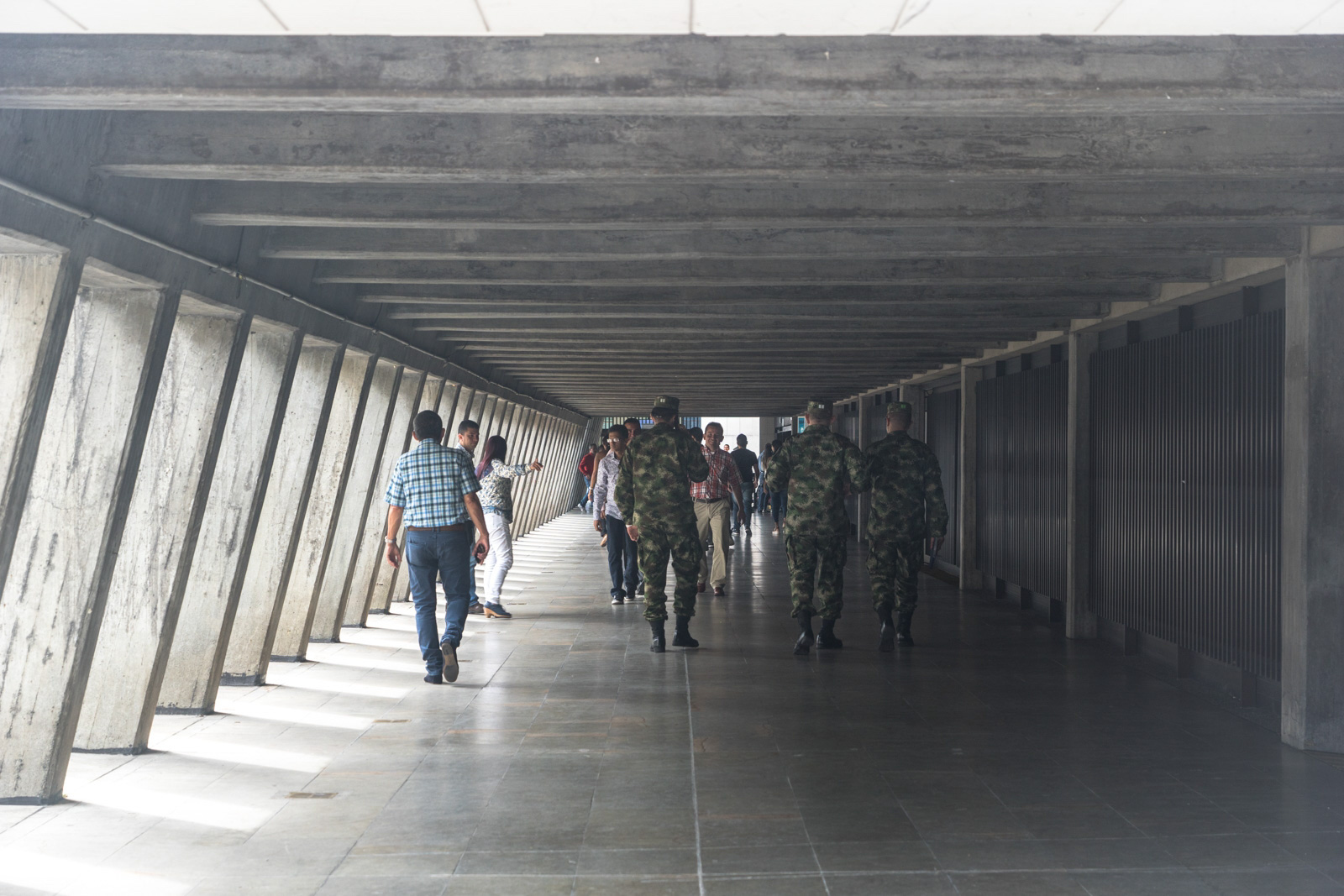 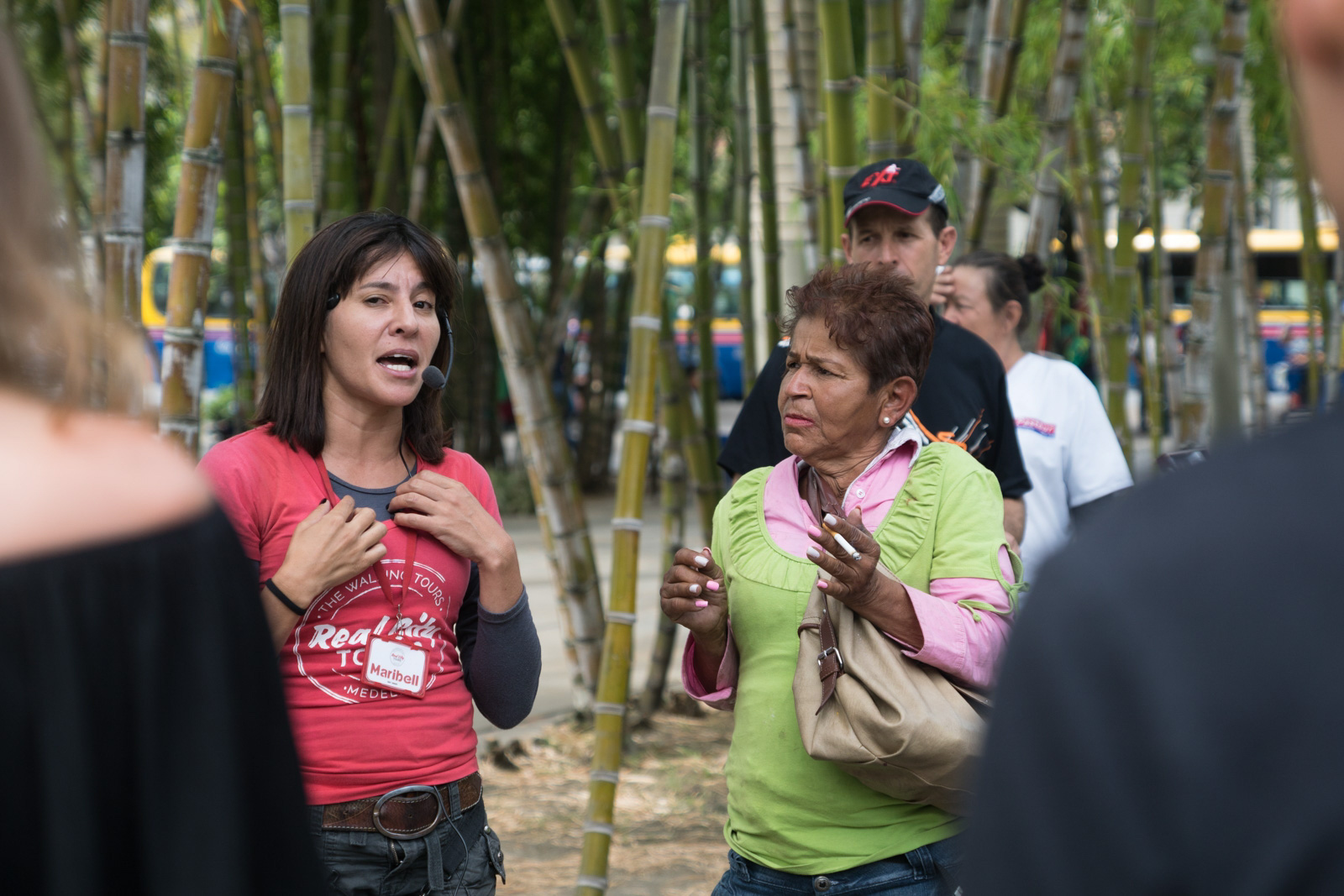 Since we left the States we wanted to take in a Futbol match, and here was our opportunity! We arrived at the Stadium early in order to find some jerseys – we heard this was a great way to assimilate (futbol matches can get rather rowdy in this part of the World). After doing our best to negotiate and find the best deal around, we all wound up in Medellin colors. Now the entrance to the stadium was rather intense. They filed you in one-by-one and on either side of us were police and behind them were police on horses and behind them was the GD SWAT TEAM! Getting closer to the Stadium males were separated from females and we went through a thorough pat down (closest thing to a cavity search we’ve EVER EXPERIENCED!). There were also dogs – which we later determined to be bomb sniffing dogs because the amount of marijuana in the stadium could only be compared to a Bob Marley concert! Now, trying to get the best experience possible, we chose our seats in the rowdy area possible, Zona Norte. We were told that the people there stand the entire game and if a goal was scored the mosh pit was on! Well that couldn’t have been more accurate…the stoned patrons on the north end of the stadium stood and sang the ENTIRE MATCH! It was unclear if they were watching the game or not because nothing disrupted the endless chants. Until, of course, a goal was scored…and then all hell broke loose. “AND THE CROWD GOES WILD!” is definitely an understatement here…The game ended in a 1-1 tie but that really didn’t matter. It was one HELLUVA experience! 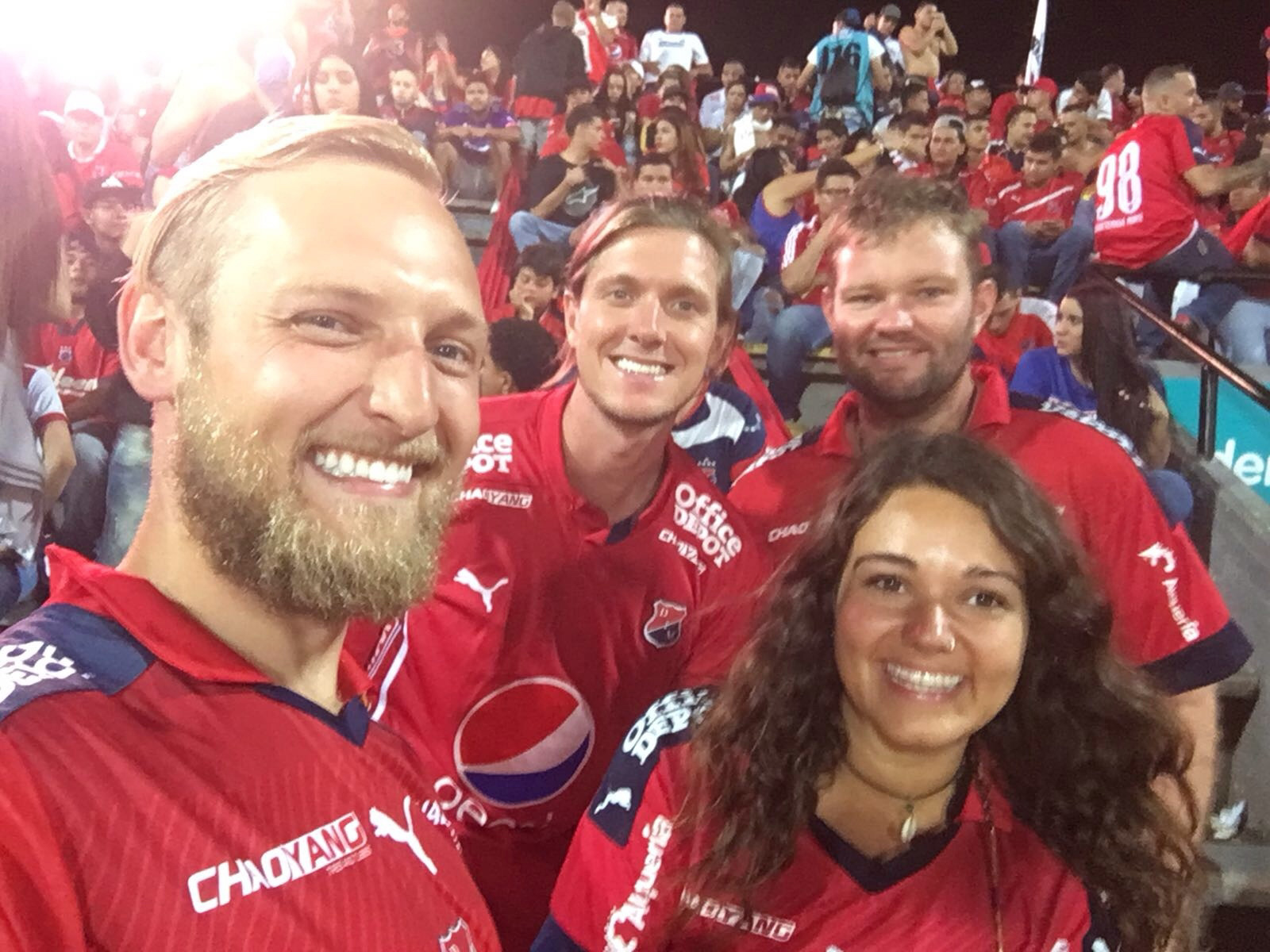 Finally time to hit the road, we made moves to Filandia to spend some time in the coffee region. We stayed at the Steel Horse, with Yvette, her two puppies, and Paul the cat. Yvette is quite the host and if anybody is ever in this region we HIGHLY recommend staying at the Steel Horse! Anyway, since we’re in the coffee region we might as well learn something about coffee, eh?! We chose to take a tour with the Plantation House and Don Eduardo (Don Eduardo isn’t his actual name, he’s really from England but Don Eduardo sounds a little more authentic). Well Colombian or not, the guy sure knows his shit about coffee. He walked us through the entire process even allowing us to drink not ONE but TWO cups of delicious locally (and by locally we mean we could touch the tree it came from) brewed coffee. Great tour! 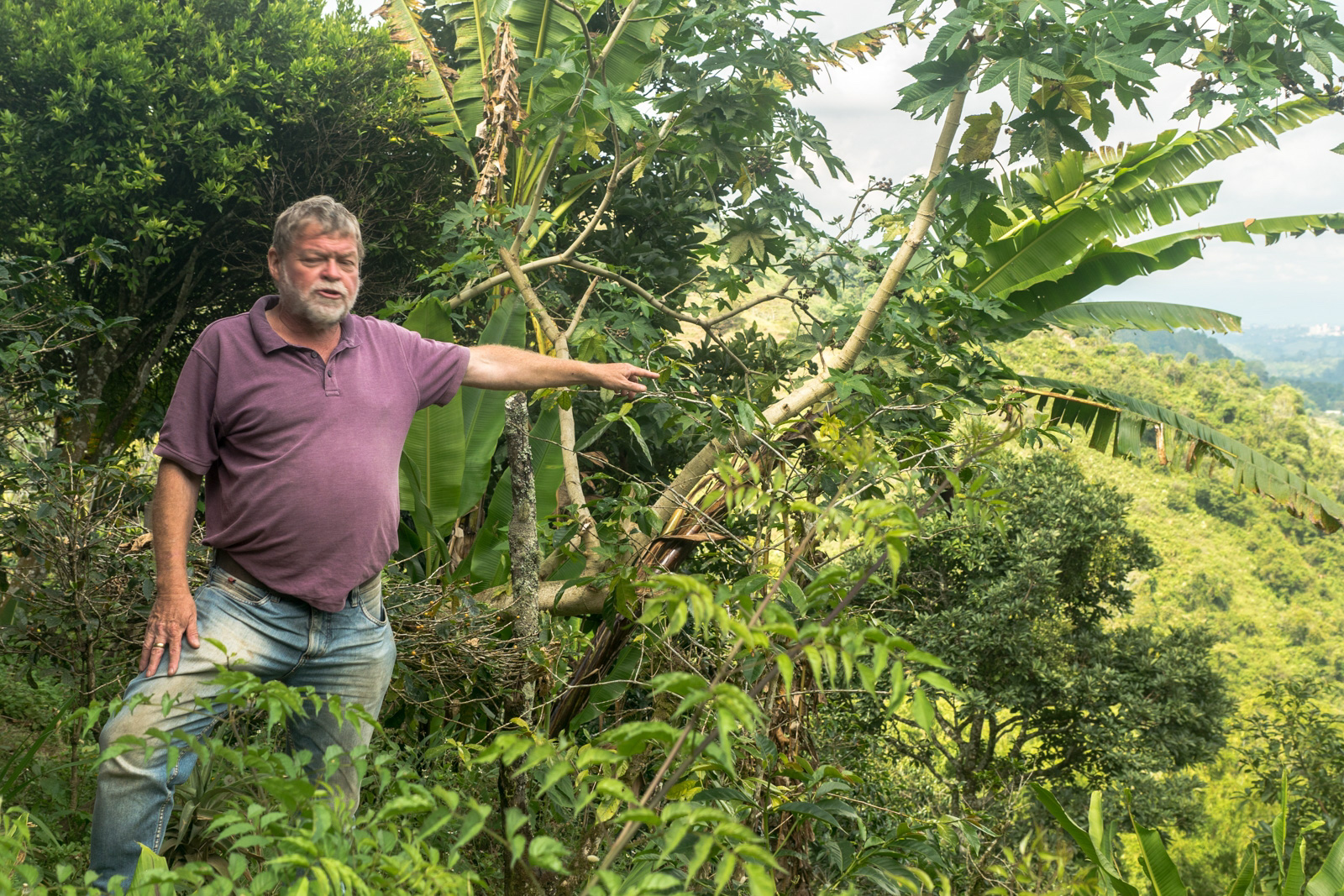 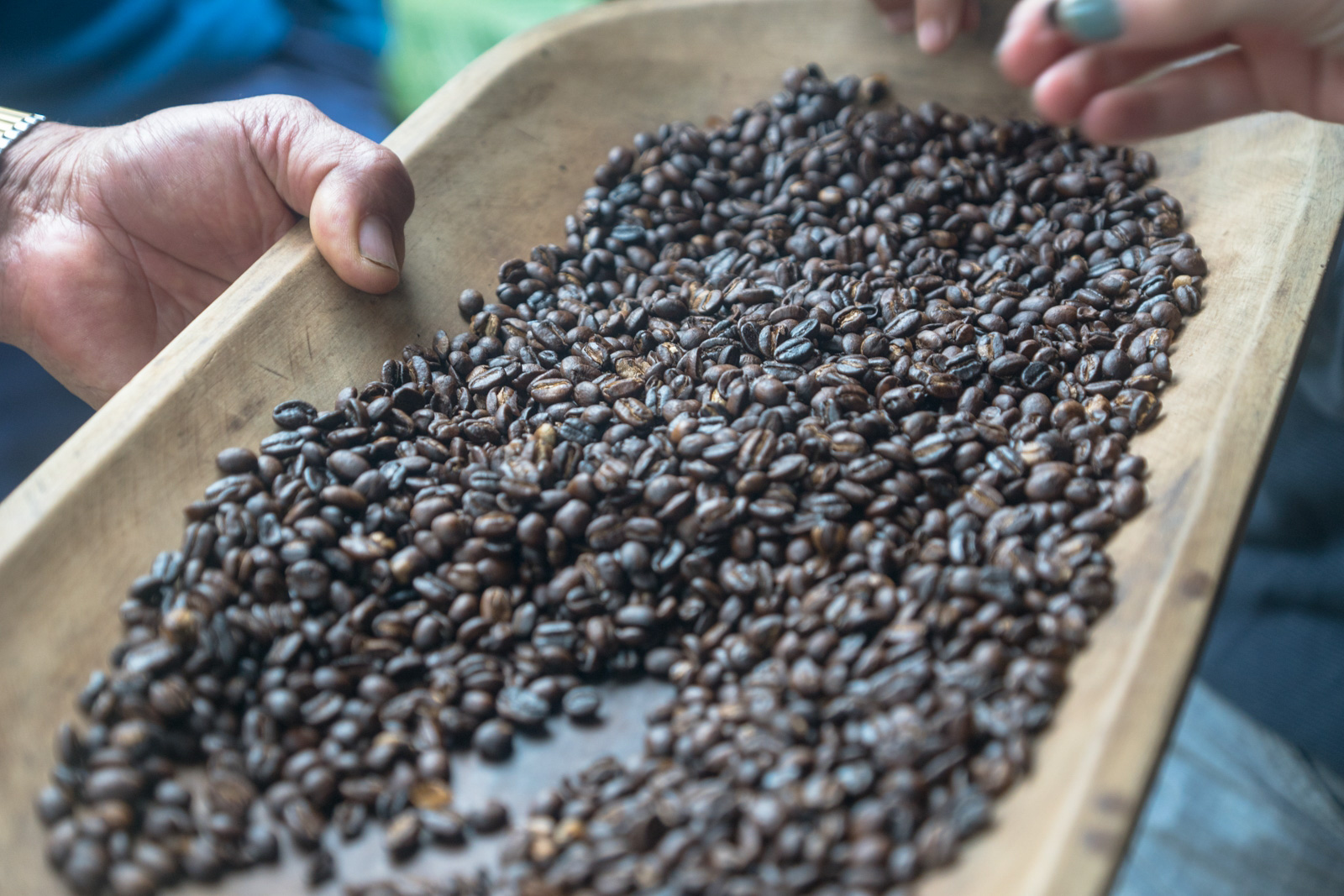 The other main attraction, well probably THE ATTRACTION in the area is Cocora Valley.  The land of the wax palm! This palm species can grow to a height of 148 ft — or rarely, even as high as 200 ft. It was pretty incredible to see considering the Cocora Valley sits at over 7000 feet above sea level. We decided to go the opposite way of all the tourists (avoiding tourists has become our specialty). This way we would could enjoy the nature peacefully. The hike, although it rained 50% of the time, was quite incredible. The wax palms, the river crossings, and overall scenery all made this a day to be remembered! 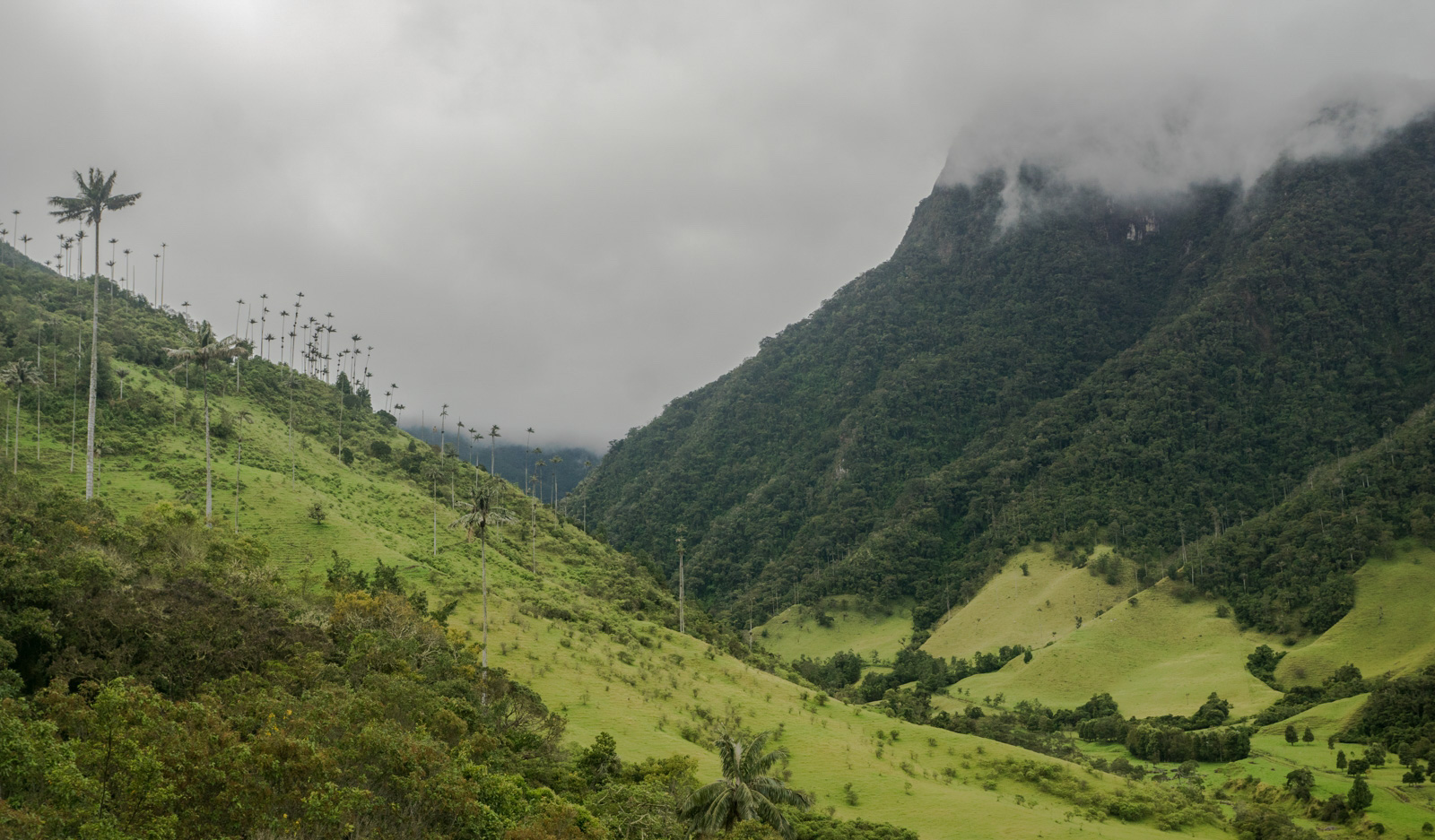 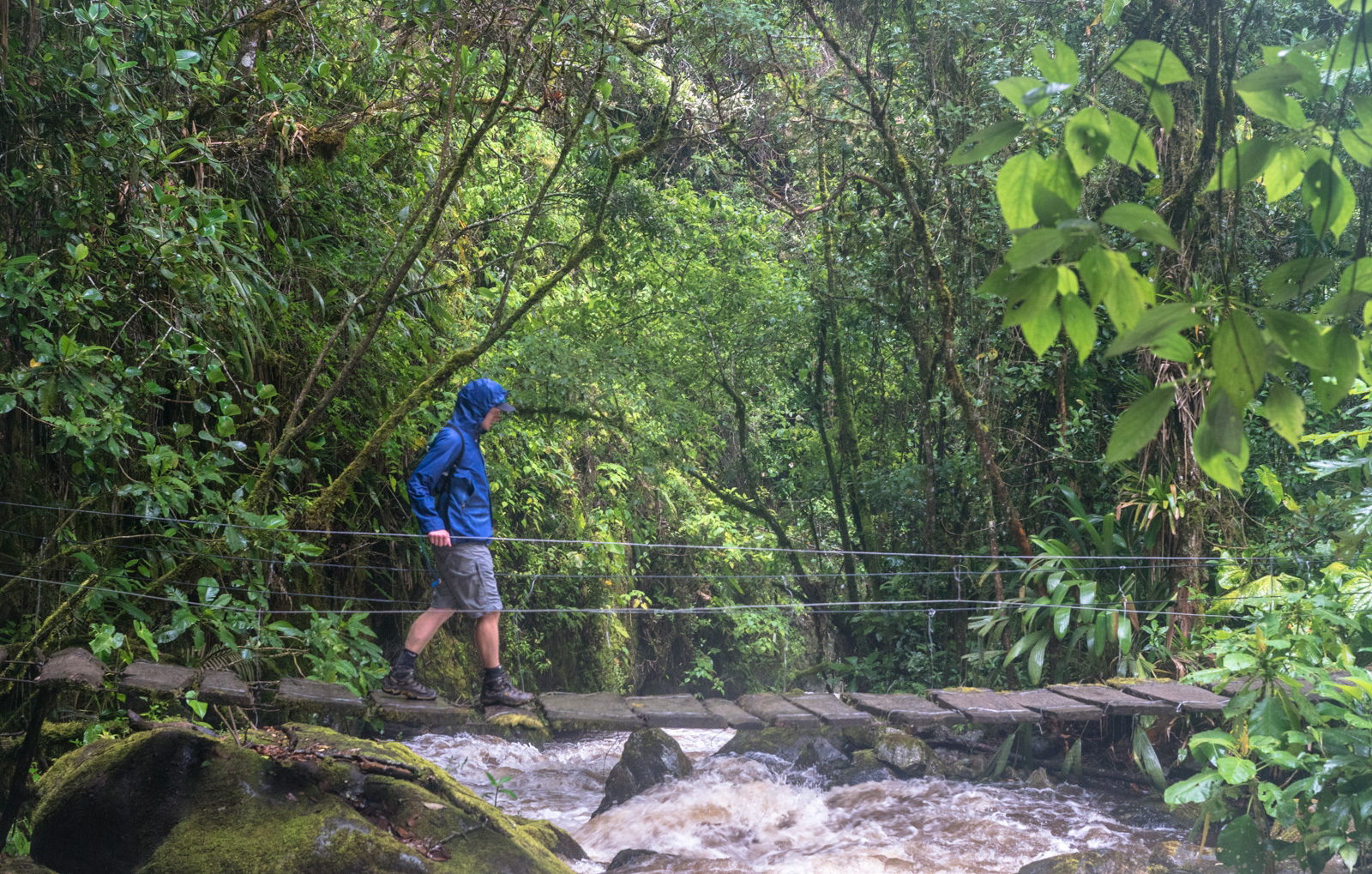 With Justin flying home for a good buddies wedding. Mitch and Antonia were left to dive deeper into the coffee region. More great hikes, camping, and scenery to come!