With a majority of Colombia behind us there were still a couple of areas that needed to be explored. Most travelers didn’t have anything good to say about the capital city of Bogota BUT in order to verify we’d have to experience it ourselves – plus big Cities always give us the opportunity to resupply, tune up the bikes, and feel like normal people for a change. From Bogota we wanted to head south into the Tatacoa Desert where we’d heard there was some amazing off-roading before sliding on over to the Spanish Colonial town of Popayan (not quite sure why but we heard it was cool). Good times to come!

Leaving the coffee region wasn’t easy but after almost three weeks it was finally time. Swerving, weaving, and inhaling diesel fumes were something we’d become accustomed to navigating through some other BIG Latin American Cities (cough, cough Mexico City) so we thought we had this in the bag. Things were flowing smooth UNTIL Mitch got a little aggressive and tried to shoot the gap between two rather large Colombian semi-trucks. Well, the back right truck wasn’t having it and casually gave Mitch’s back right pannier a love tap pushing him into the wheel-well of the other truck to his front left…NO BUENO!! Not knowing how he wound up on the high side of his bike (and outside of the wheel-well), he looked around noticing that he had about 100 eyes on him and as quickly as he could pulled the bike up-right and wobbled his way to the nearest gas station…something’s not right here!! With his steering bearings FUCKED and dash board SHATTERED, Mitch limped to home base praying there was a solution for todays catastrophy.

We spent the rest of our days in Bogota enjoying Kyle’s cooking, eating more empanadas than one man can count, enjoying the nightlife, and taking a really cool graffiti tour downtown.  Although other travelers had given the HUGE city (80km from end-to-end and almost 10.2 million people) a bad rap, we rather enjoyed it. The neighborhood we stayed in, Cedritos, was fairly affluent (never seen so many designer dogs in our lives), the people were intelligent and there was TONS of ENERGY (nothing out of the norm for Colombia). Oh yeah and Mitch was able to fully repair the KLR thanks to the Guys at Motorrad Bogota!! The only question now was if he would ever feel comfortable in big city traffic again?! 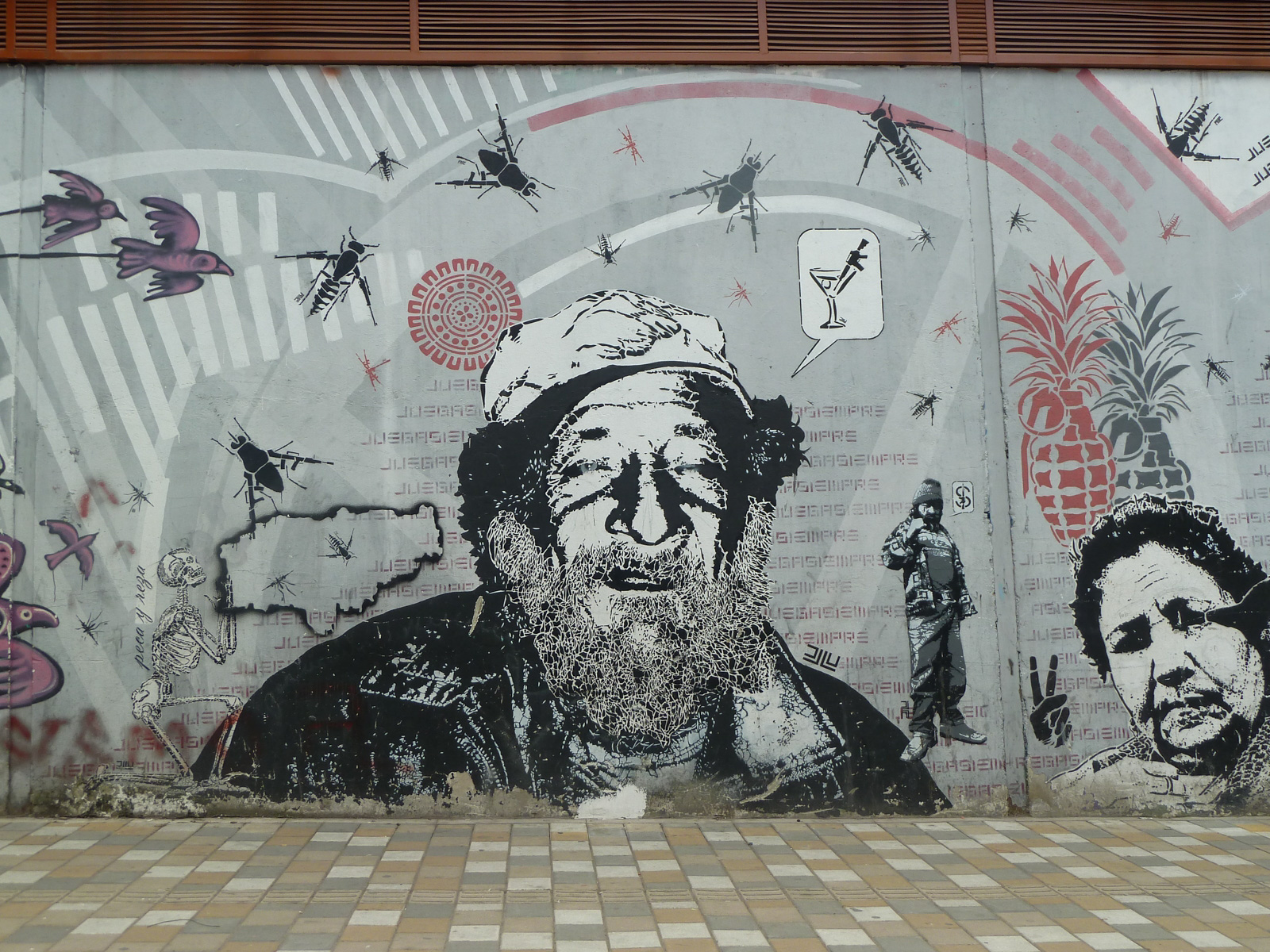 Thankfully the Boys got out of Bogota unscathed, next stop the Tatacoa Desert! The entrance to the desert was unbelievable with a few bridge crossings, and our favorite terrain, sand! The plan was to camp until we ran across a couple locals building what appeared to be a gringo resort in the middle of the desert…we pulled in and our first question (obviously) was if they had any cold beer?! After taking care of the essentials, the proprietor offered us a spot to camp under one of his half-built shanty’s. Cuanto vale, we asked?? His only response was “tranquilo” a word that we’ve learned to hate from the locals when we are trying to get a straight answer. It’s similar to the “Indian head nod”. Well with the assumption that since we were using our own camping gear and staying in a half-built structure, it couldn’t be that expensive, right?! WRONG! Waking up the next morning at 5am, (they started work before the sun came up) full of bug bites and sweating our asses off (who woulda thought the desert would be HOT?!) we once again confronted the owner to see how much he wanted to camp on his property…Hmmmm how about 100,000 pesos (the equivalent of about $33 USD)? Are you fucking kidding us?! Not even the nicest of hostels would even dream of charging that price. Although 99% of Colombians are absolutely amazing this guy broke the mold…Mitch begged and bartered, listing the details mentioned above and finally got the guy down to 70K (or $23 USD). Lesson learned, next time we find our own camp spot!! 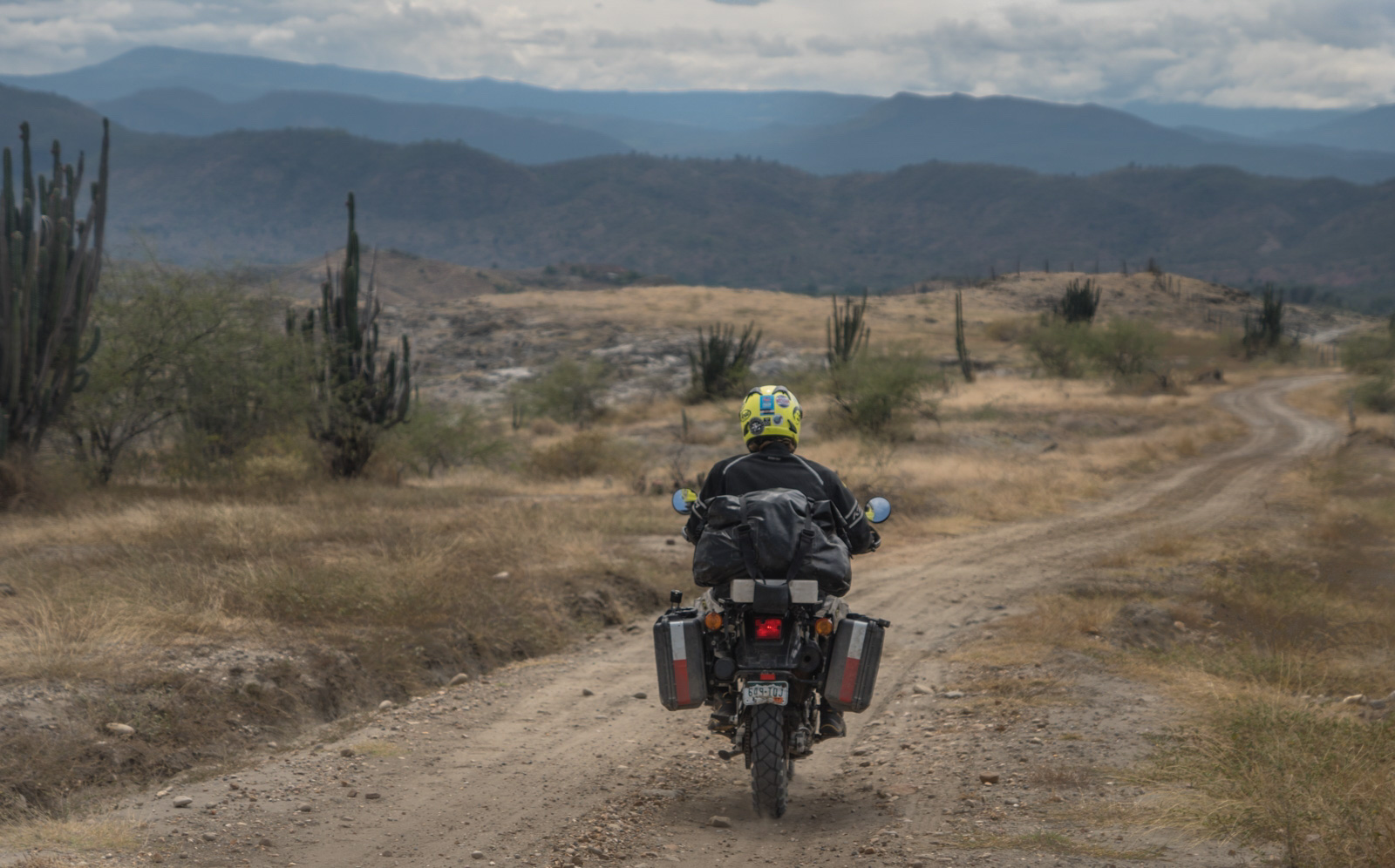 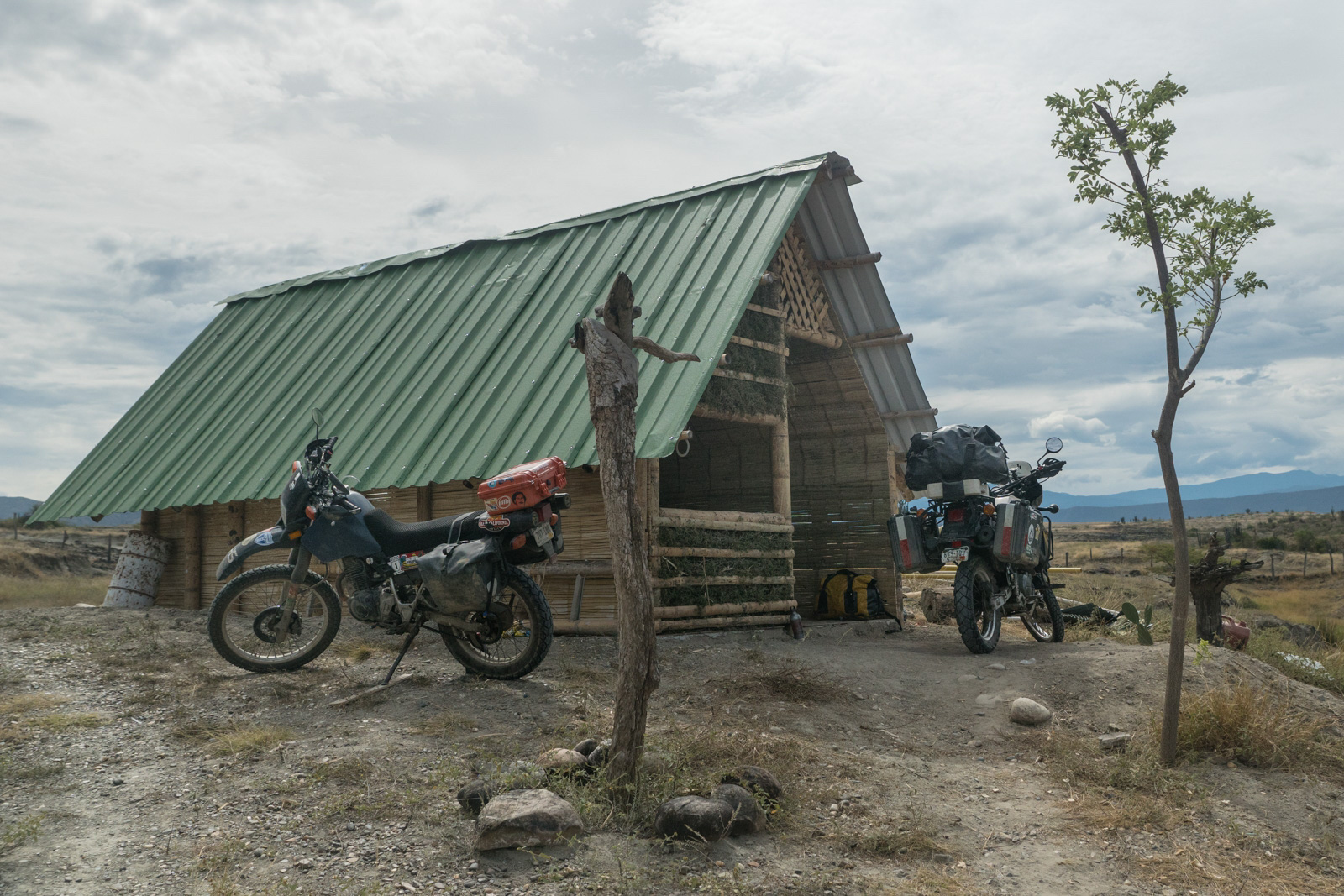 Leaving the campsite, we toured the desert by moto, what a beautiful place! The only issue was the heat! Over lunch we decided to make a push to Popayan which was located in the mountains and clearly had a more comfortable climate. 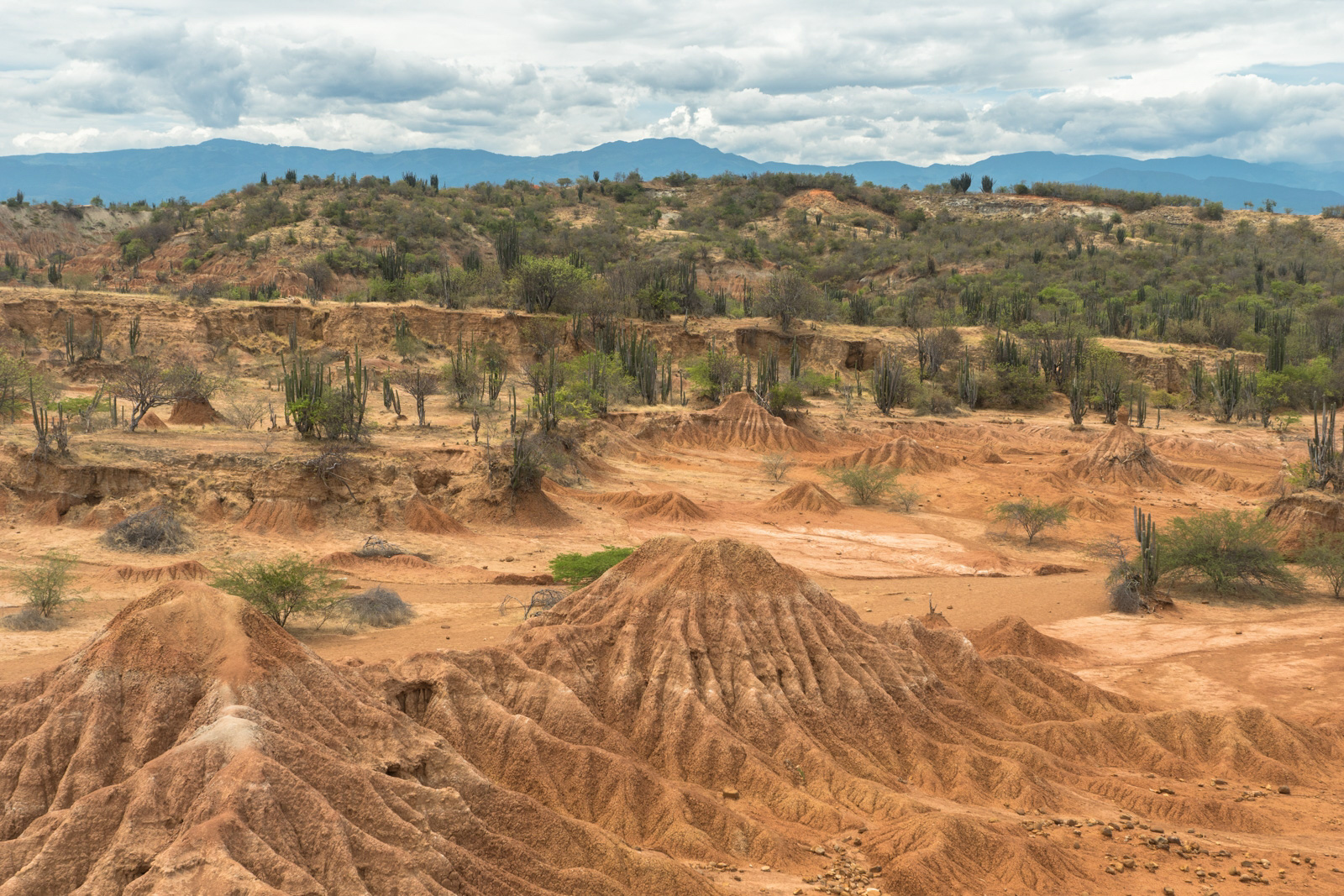 Now for the drive, THE DRIVE! From Nieva (just outside of the Tatacoa), MAPS.ME – our trusted GPS system – took us up and over the Cordillera Central. It was 180+ KM of a partially constructed unfinished gravely, rocky road, but boy was it an AMAZING DRIVE! Although we didn’t spend more than 20 minutes on an ACTUAL road we had a blast meandering through the mountains experiencing all forms of weather and climate. 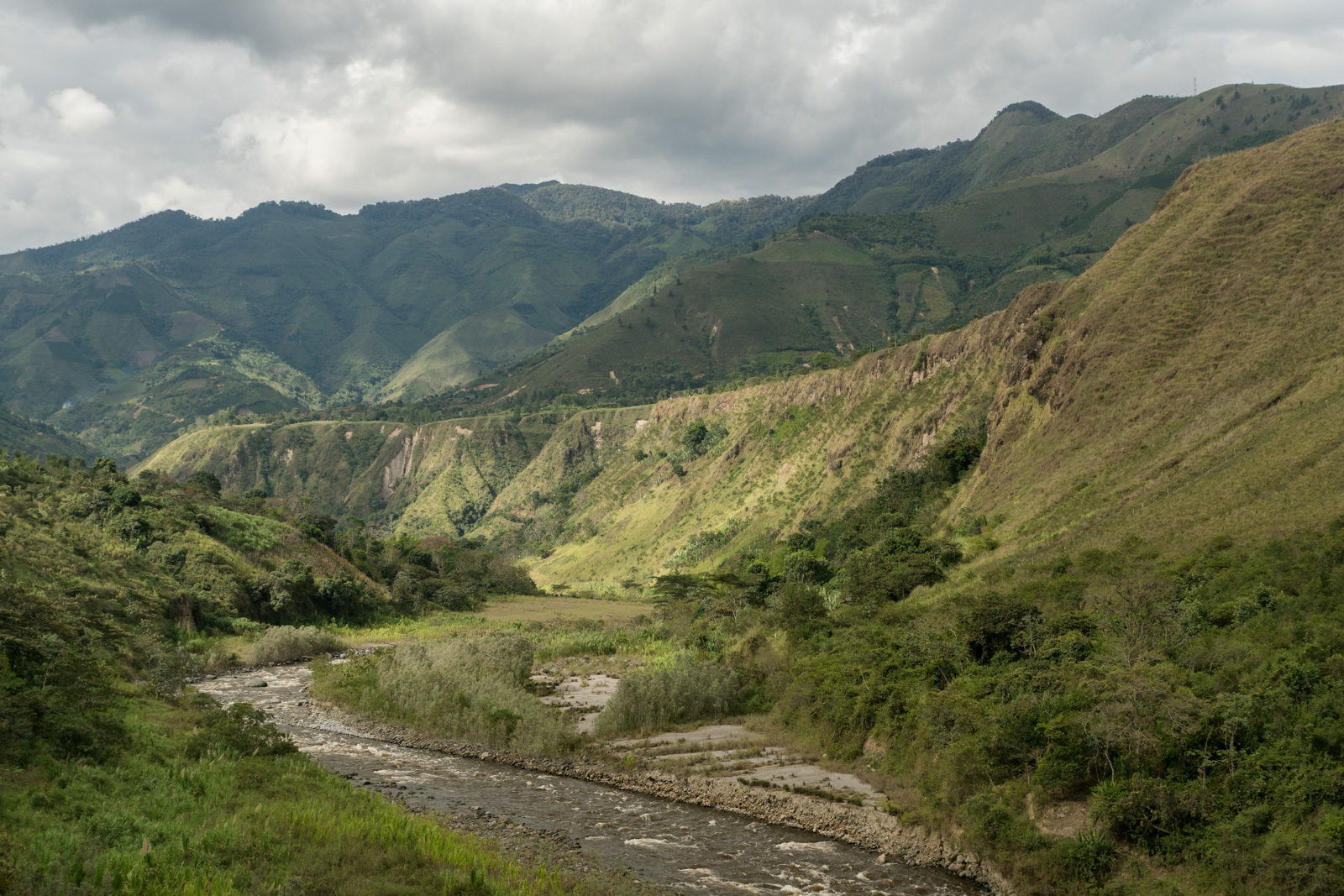 Pulling into Popayan was chaotic to say the least. It was something out of a comedic skit, yet could have been potentially trip ending. In Colombia, everyone receives their own motorbike at the age of 12 (not sure how accurate this is but it feels like the truth) so traffic can best be described as organized chaos! People are whizzing every which way and it can be quite unnerving at times! The other issue we were having was that we just couldn’t quite figure out where our hostel was! We must have circled around the neighborhood (once wondering into a place we knew we shouldn’t be) at least 5 times before finally finding Casa del Sol. By this point Mitch’s bike was on the verge of death. She was overheating and wanting to stall. Upon entering the driveway and giving it one final burst the bike started to SMOKE…and we all know that where there’s SMOKE, there’s FIRE! Within an instant, flames were shooting out from underneath the seat! FUCK!! Somebody get a fire extinguisher before this thing blows up! Our host found one, but obviously it hadn’t been tested and of course didn’t work…The Boys running out of options, sprinted into the house and found whatever they could (Justin a blender and Mitch a pot). Filling them up as quickly as possible, we sprinted back outside dowsing the fire. Thankfully, after further examination it was a shorted wire that caused the seat to start on fire and not a oil fire (because we all know that putting water on a oil fire is a REALLY BAD IDEA)…WELCOME TO POPAYAN!