Honduras, outside of 3 (maybe 4) spots regularly visited by backpackers, doesn’t have the best reputation. Ever since Baja, we’ve heard stories of corruption and extortion, with one crazy Ex-Pat even telling us how he’d been completely displaced from his retirement property by the cartel. HOW COULD WE POSSIBLY PASS ON ALL THIS FUN?! Copan Ruins would be our first stop, followed by a long drive up to the Caribbean coast to take advantage of one of the CHEAPEST places in the world for diving, Utila, and to visit a pirate legend in Sambo Creek.  As always, there would be quite certainly some other adventures along the way.

Getting out of El Salvador was almost as easy as crossing into Mexico (where we literally drove across what seemed like an imaginary line). We got stamped out, traded some dollars for lempiras (24 to 1) and were on our merry way. Then we got to the Honduran side…immigration was fine, we paid $35, and got stamped into the country…but then we had to import the bikes. We thought we were in the clear when we pulled up to Aduana and were the only ones there. NOPE, the guy took over 2 hours to process us in! GOD BLESS! Redressed and ready to leave the last check point to freedom we were stopped!! Apparently during the 2 hour process the dipshit wrote down Justin’s VIN # incorrectly. Back to Aduana it was. This time with a rather long line. At least Justin has continued to be one of the tallest members of society! 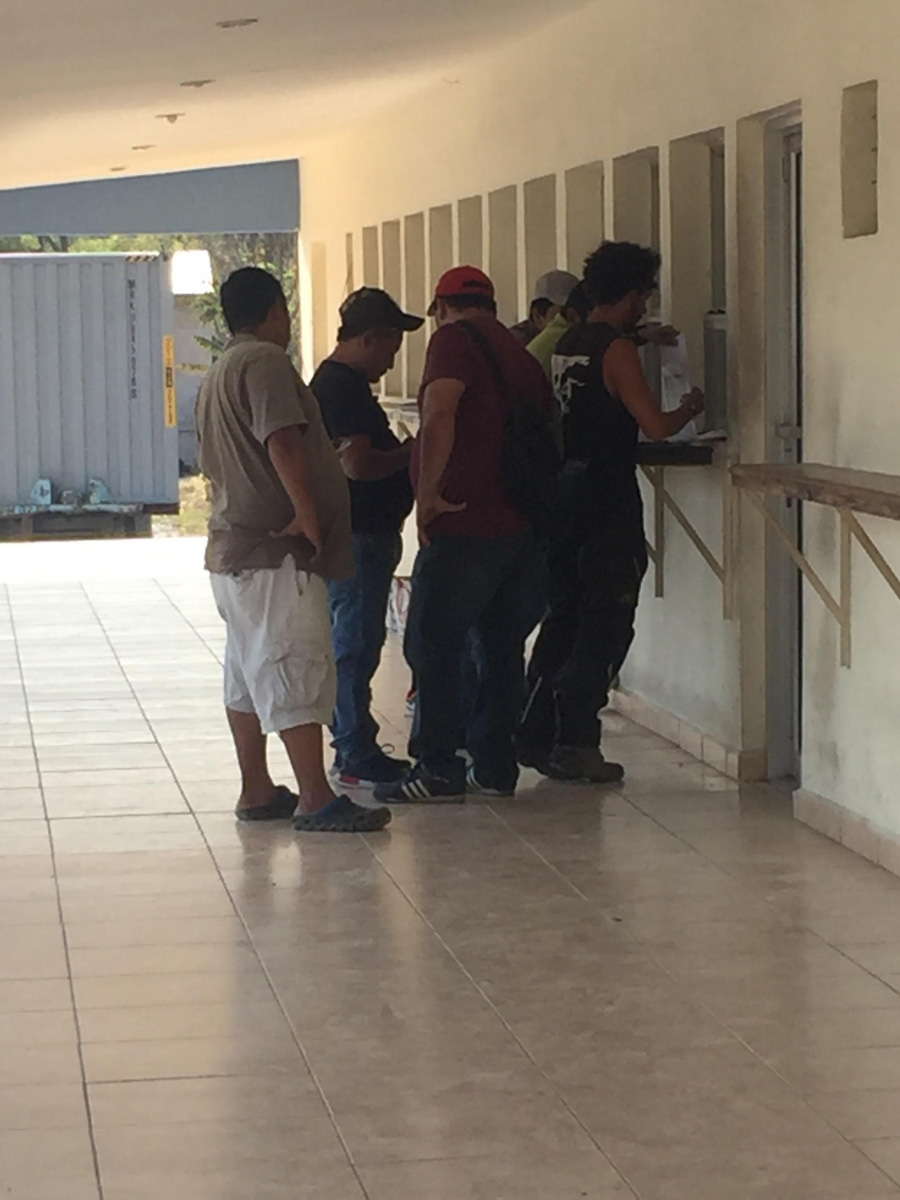 Due to the delay, we weren’t able to make it to Copan and had to settle for a hotel about 40 miles over the border. Starving when we arrived, we approached one of the locals (who happened to be sporting a Colt 45 on his belt) and asked for his best recommendation “Te gusta comida de China? Si, por que no?”. We happily gorged ourselves on fried wantons, chicken and broccoli, and fried rice before slipping into a MSG coma… 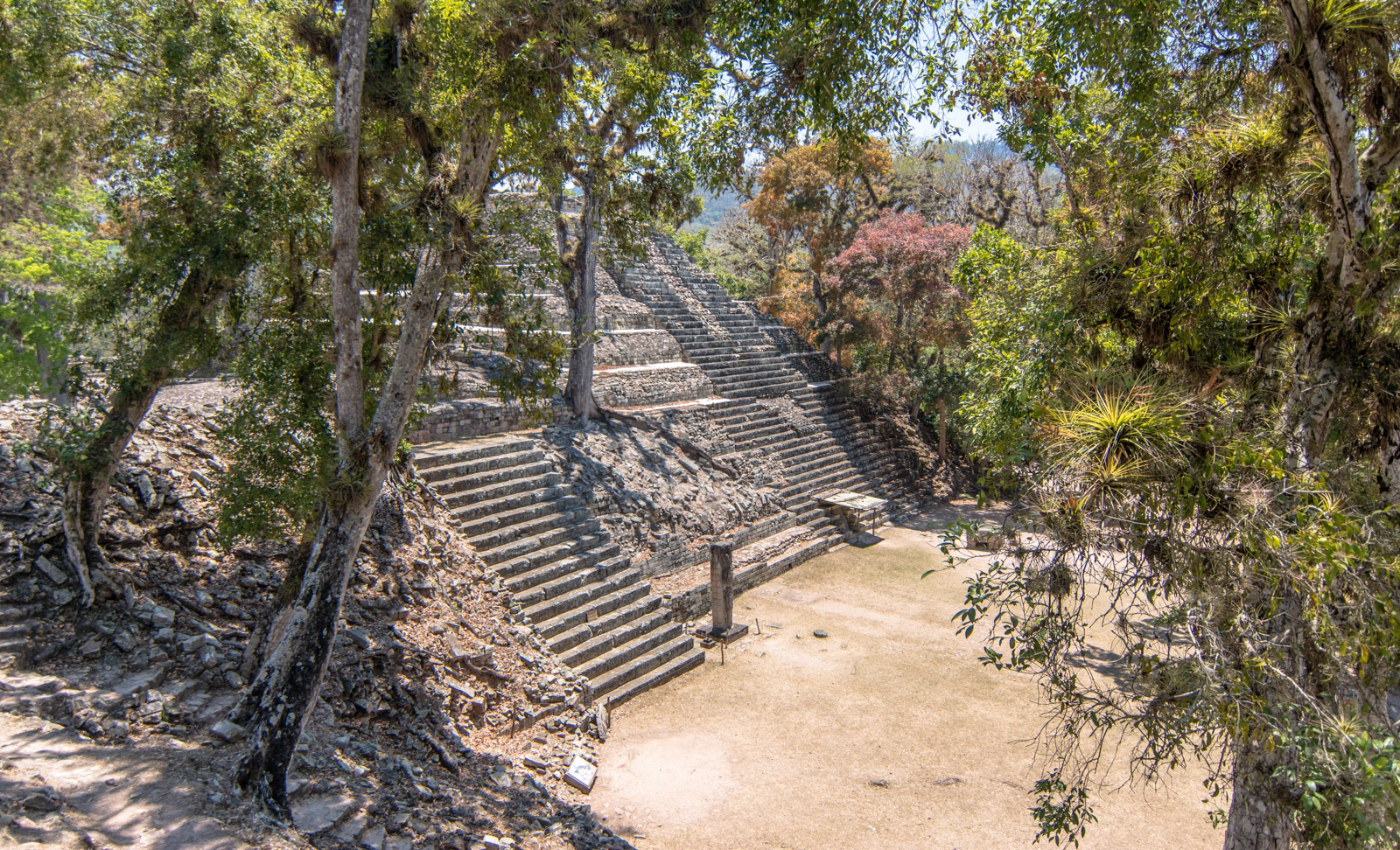 Next stop, Copan Ruins. Why? Because we’d heard it’s a pretty cool little town, they have some interesting things to do in the area, and it’s on the way up to the Caribbean coast, kinda of. After being spoiled (Central America style) by the roads in El Salvador, we returned to the shit show. Nothing could be quite as bad as Guatemala BUT we found ourselves navigating pothole after pothole – any one of them could have ruptured a tube OR EVEN WORSE sent us flying straight into the nearest Honduran hospital! Trouble averted, we spent a couple days in Copan at Hostel Iguana Azul, which was a nice spot.

We spent one full day scouting out the ruins themselves. After unsuccessfully trying to claim residency and get the 90% local discount (go figure they didn’t believe Mitch’s 6ft blonde hair/blue eyes weren’t native) we climbed the old stones known worldwide for their temples, altars, and hieroglyphs. To be quite honest, all these stone gardens are getting a little boring, and with a $20 entry fee we’ll have to seriously evaluate our next rock tour. That’s about it for Copan, neat friendly town but nothing super exciting (unless of course you like old dirt). 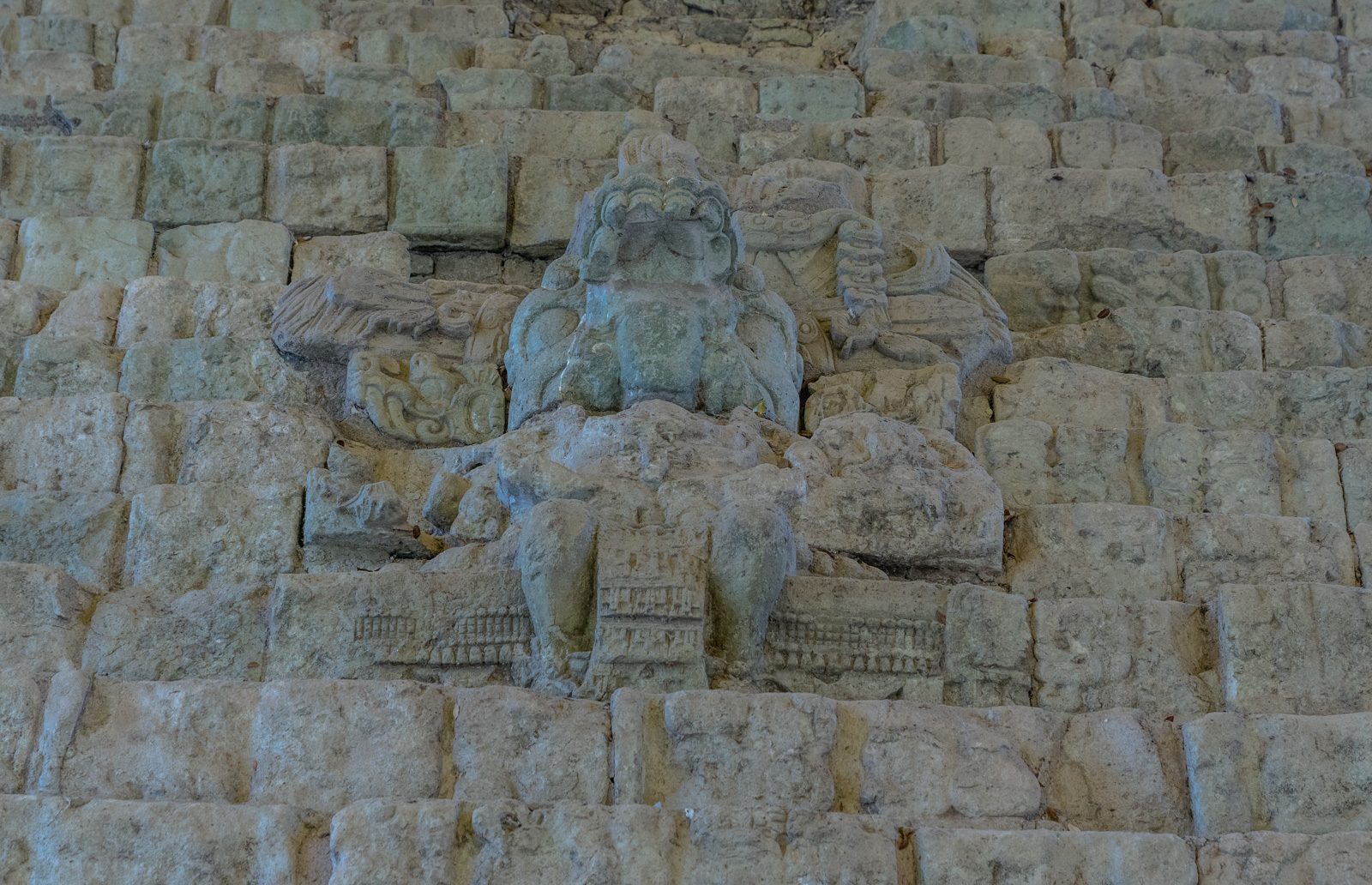 Let’s go diving! After leaving Copan and spending a night in a scary little place called Tela, we were ready to take the 45 minutes ferry to Utila. But let’s back up just a bit…we first needed to find a place to park the ladies. Thankfully, we made a friend in Baja (same guy who’s retirement property was ransacked by the cartel) who has a good friend with a free parking garage just 20 minutes away from the dock in Sambo Creek. After driving through the sweltering heat, Dante welcomed us with open arms (and rum, LOTS of rum!). Dante is an Ex-Pat that has been living in Honduras for about 11 years, the guy is an absolute riot! Not only does he look like a pirate but he smells like one too! We stayed a night there exchanging stories of the road before heading out early the next morning. 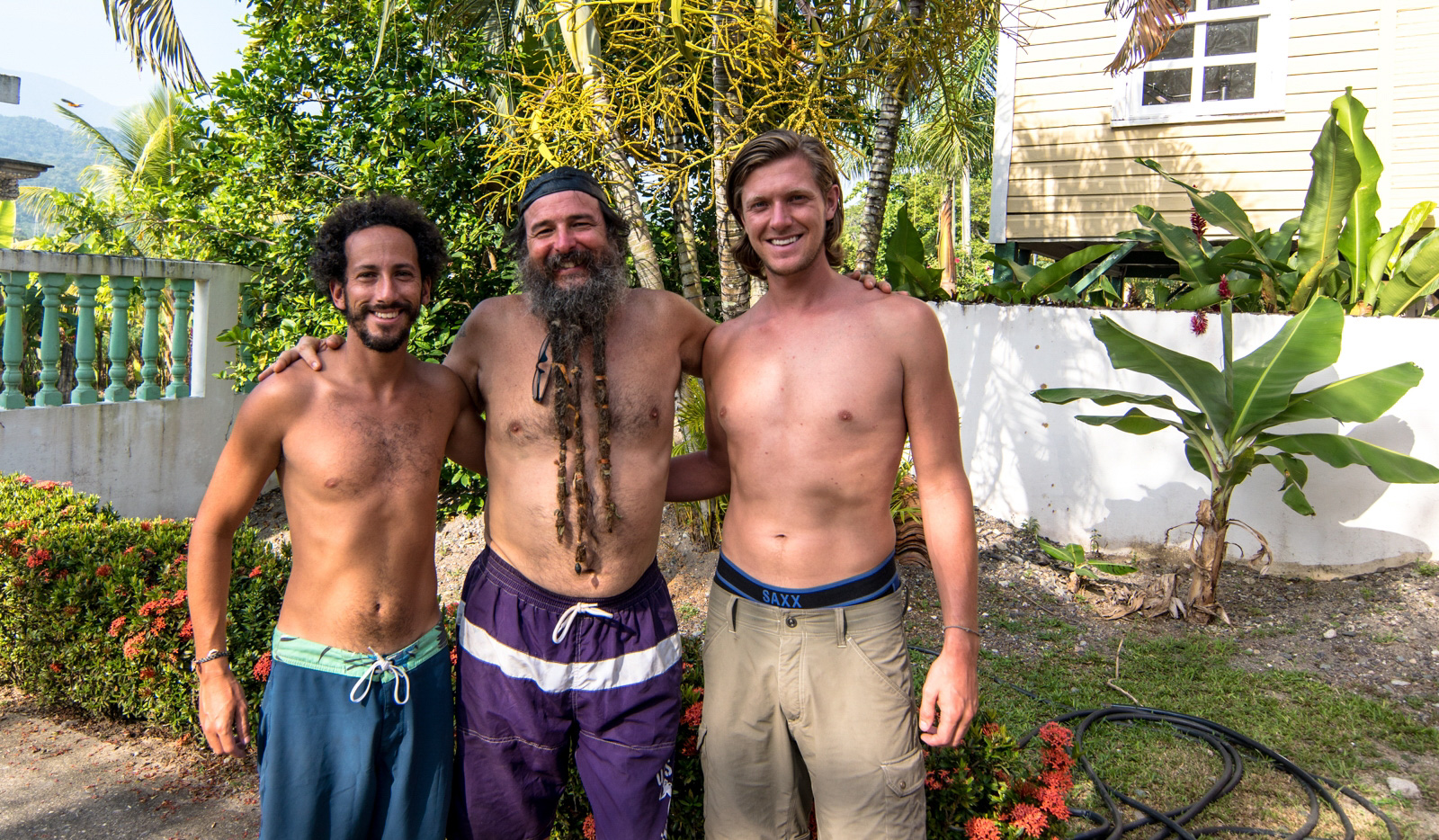 Thankfully, we sent our trusted German confidant (Antonia) to do some dive shop scouting the day before we arrived. She scoured the streets for us stopping at 10 different dive shops before finding the perfect setup at Utila Watersports (UWS). We had our own private room, kitchen, and A/C, coupled with a 3 day 7 dive advanced diver course…total cost you ask?? $270 for the ENTIRE PACKAGE! In the past, we had spent upwards of $160 for 3 dives, could this be the greatest deal on earth?! We’re still in shock! We hit the books hard, studied our ASSES OFF (by study we mean drank beers and tried to not sweat to death) and all graduated to Advanced Divers. 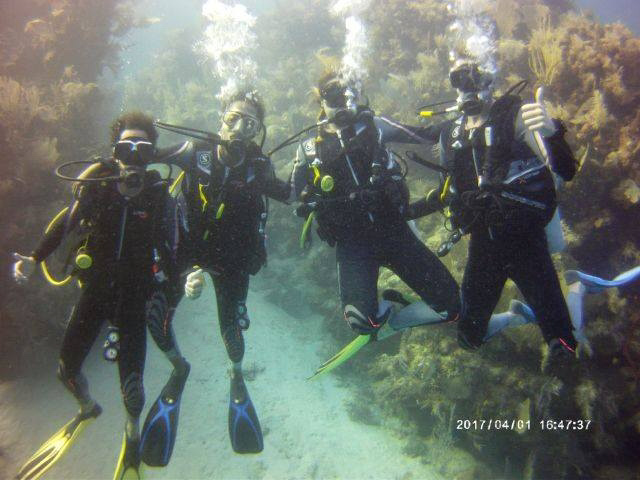 For those out there not familiar with diving certs this now allows us to dive down to 30 meters (100 feet) and night dive. We also had the opportunity to dive a pretty cool wreck as well as practice our buoyancy and compass skills. Our teacher, Melinda, was cool as a cucumber (how could you not be when you live on an island and dive for a living?!). Besides diving, we took advantage of the free paddleboarding/kayaking/horse riding available through UWS. They really treated us well – one day after our 2 FREE fun dives, they took a big group of us out to Water Caye. A beautiful private Caye a couple of kilometers from the island of Utila. We drank rum, worked on our bronze, and soaked in the beautiful scenery. A perfect ending to Utila. 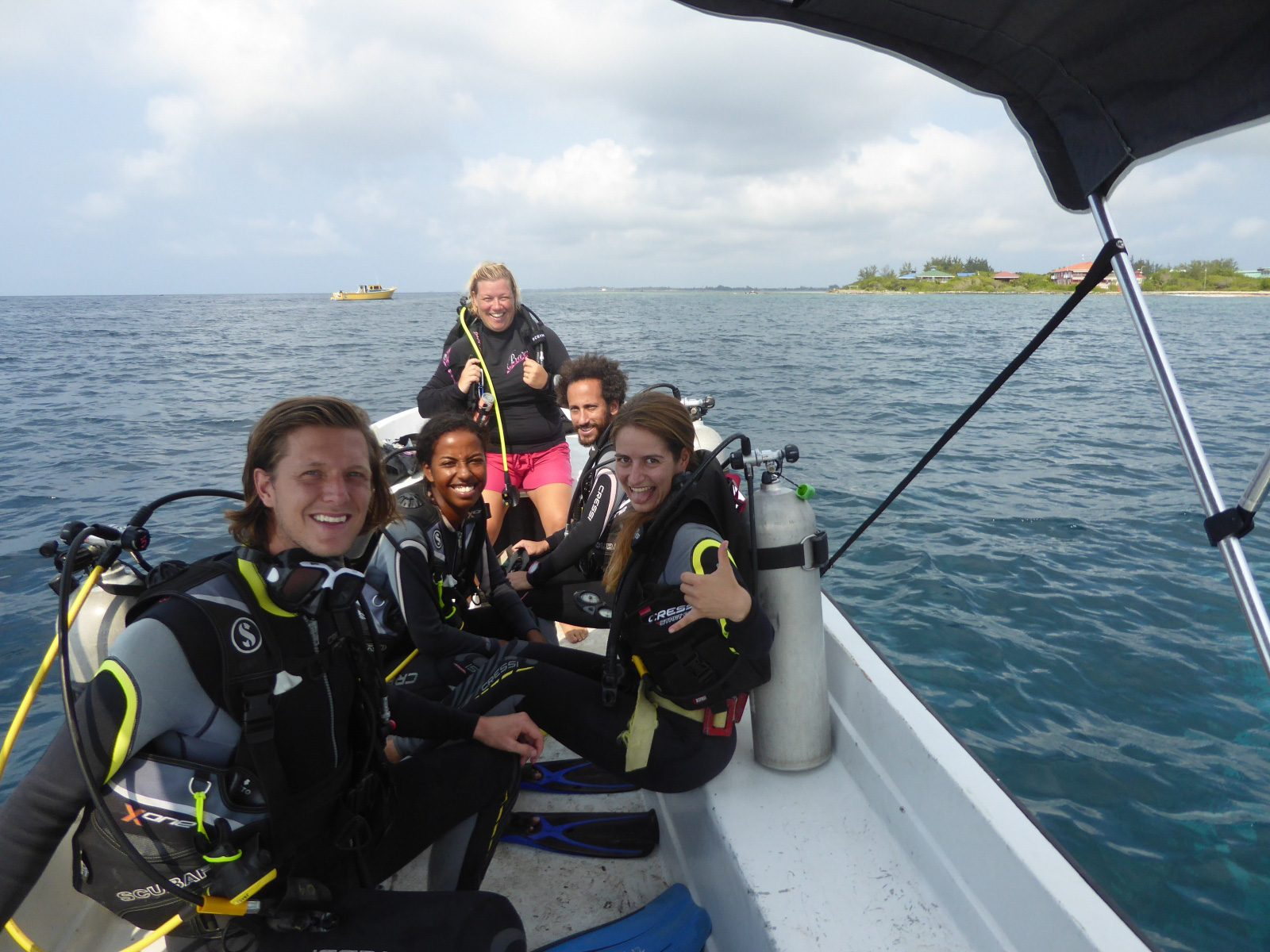 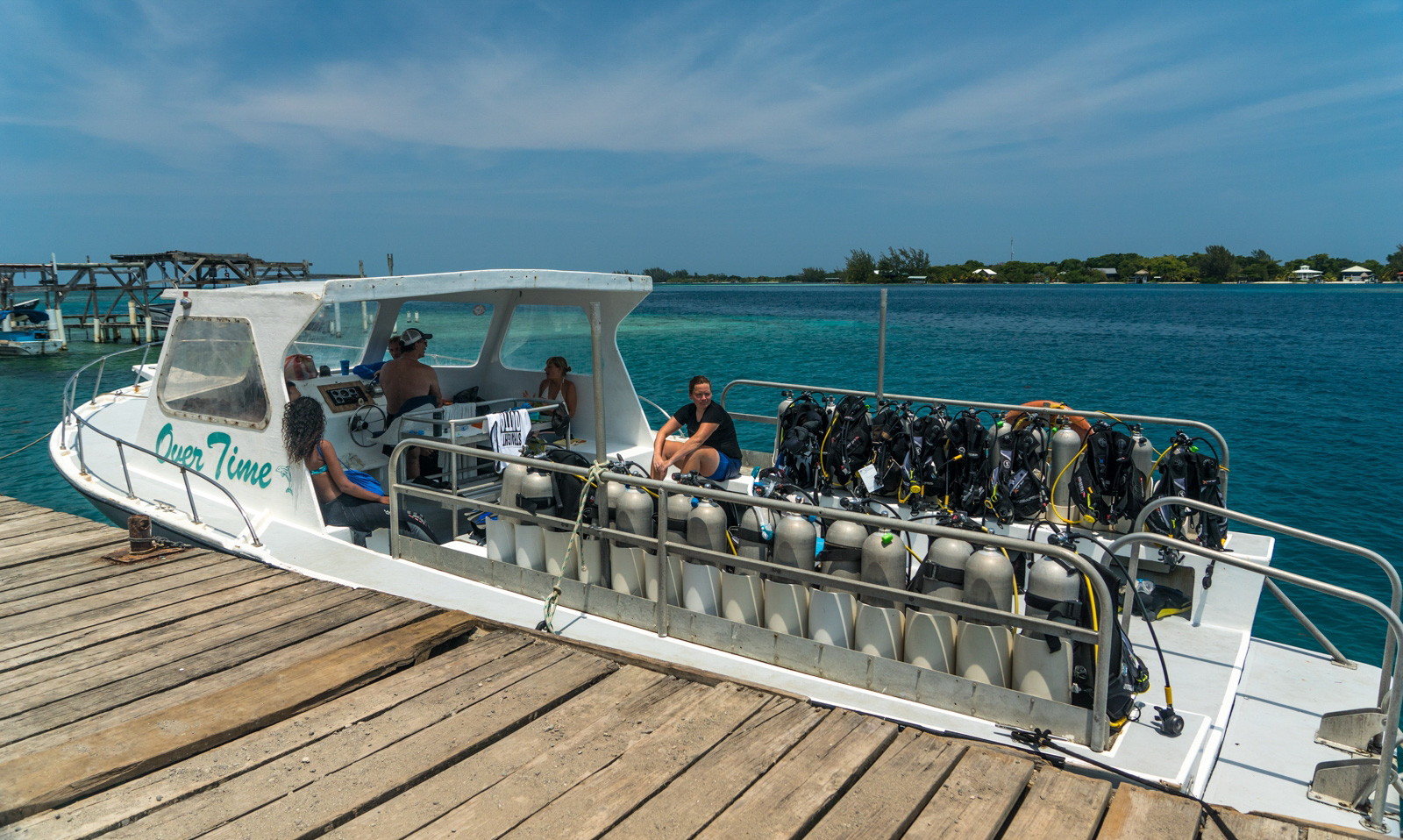 Leaving Utila wasn’t an easy choice but our four-country visa (Guatemala, El Salvador, Honduras, and Nicaragua) is starting to run low and we still have a country and a half to go! We returned to Dante’s in Sambo Creek for a couple of nights. We wanted to get up into the jungle for some rafting and waterfall jumping. In typical Dante fashion, we also engaged in some more rum drinking (probably didn’t help we bought him a bottle for letting us store the bikes). We just naturally assumed pirates ONLY accept rum as payment.

Omega tours, owned by a couple of German folk, took us on an EPIC rafting adventure down the Rio Cangrejal! Since it wasn’t rainy season the river was a little shallower than normal so instead of rafting the whole section we hiked/swam/jumped off HUGE boulders before hopping in our rafts and concluding the tour through a technical rafting section…WHAT A RUSH! 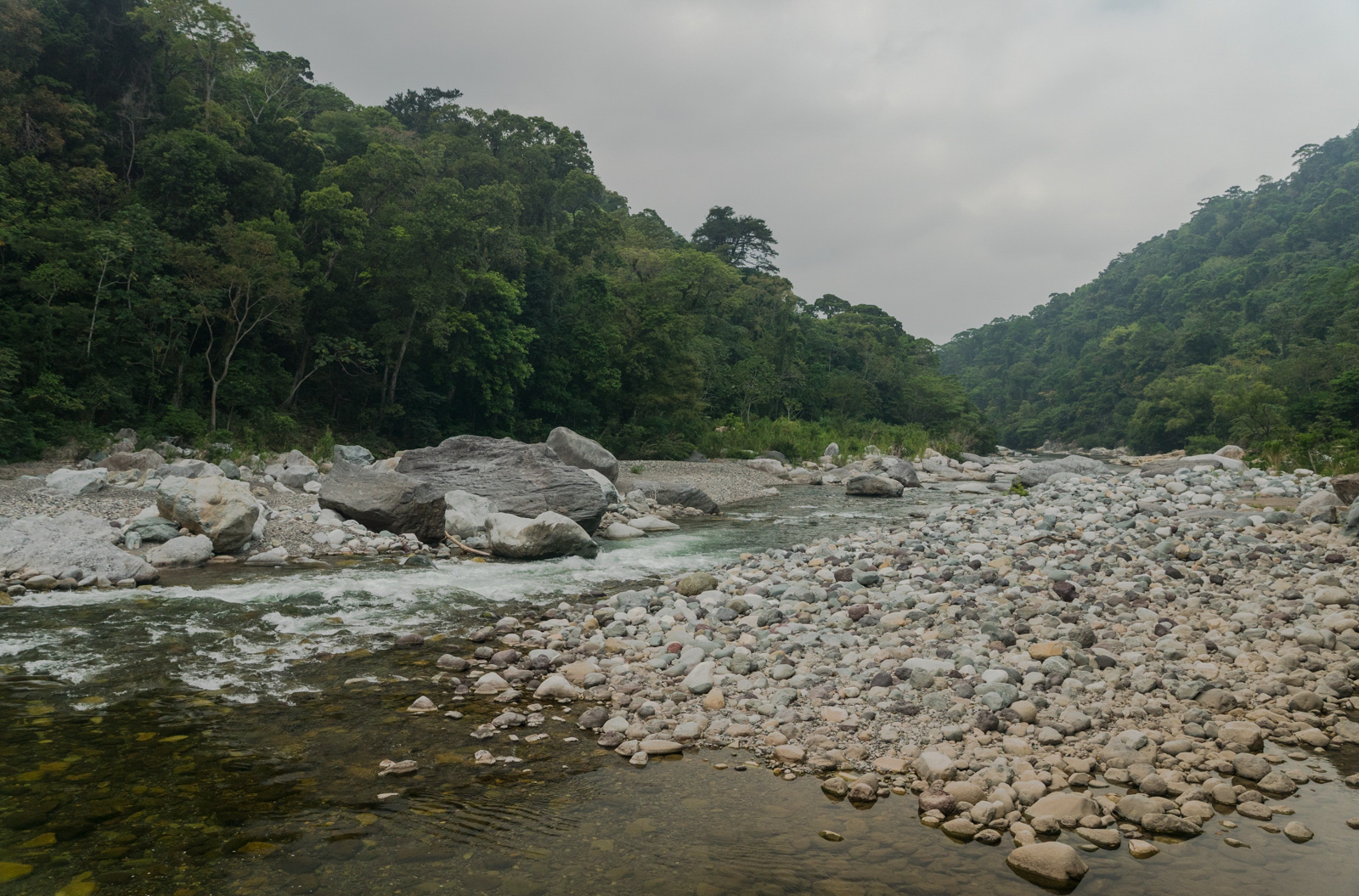 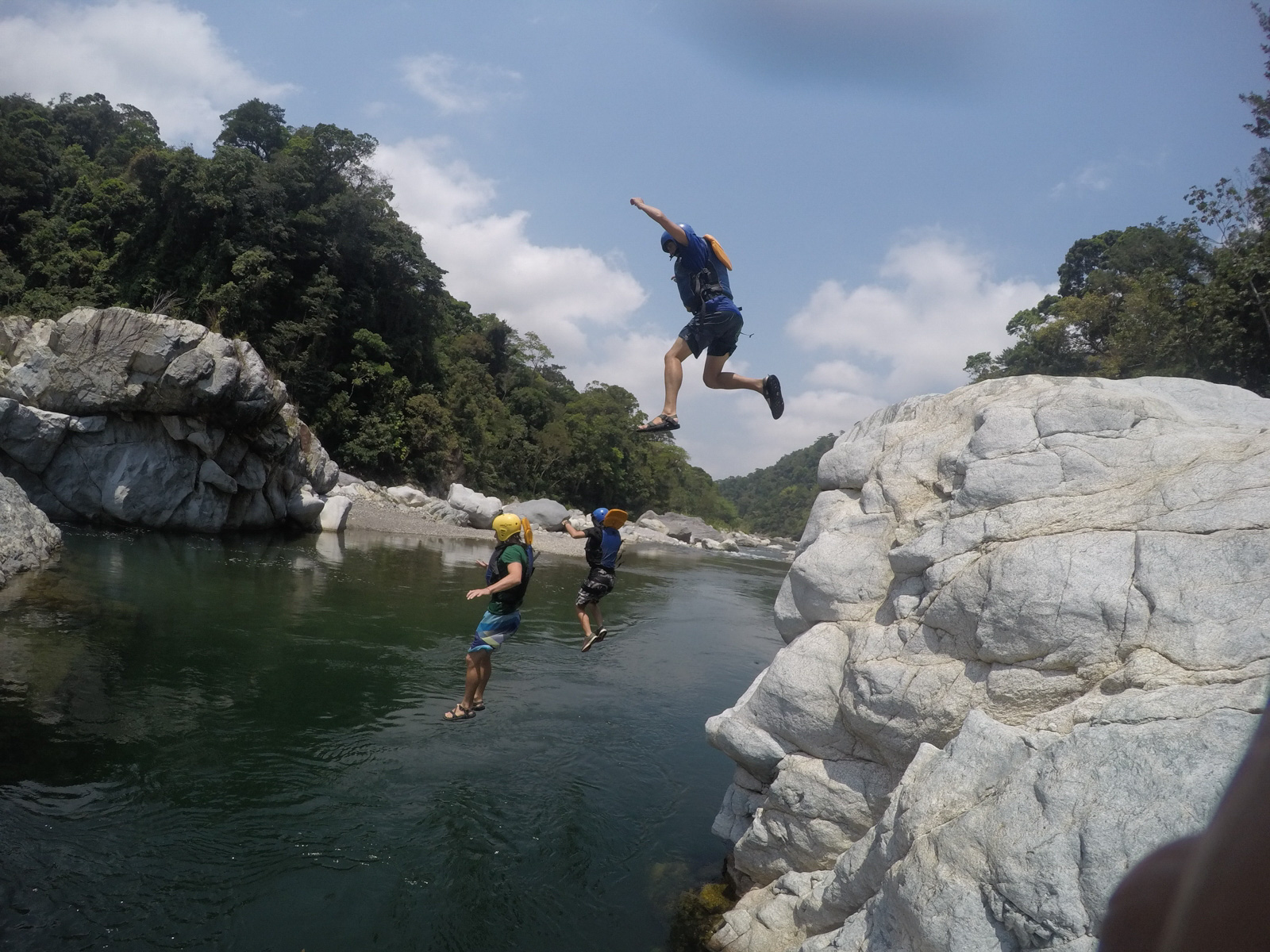 The last adventure on the Caribbean coast was a hike through the jungle to, yes – you guessed it ANOTHER WATERFALL. Now there’s US hot and then there’s in the middle of the FUCKING HONDURAN JUNGLE HOT! Within seconds we were all soaked in sweat and lost all motivation to see the property we were touring…the only thing on our minds was “where the hell is this waterfall?”. We eventually found it and boy was it a relief! Swimming around and doing our best Jorge of the Jungle impression (swinging from vines), we happily spent the rest of the day in refreshing, crystal clear waters. 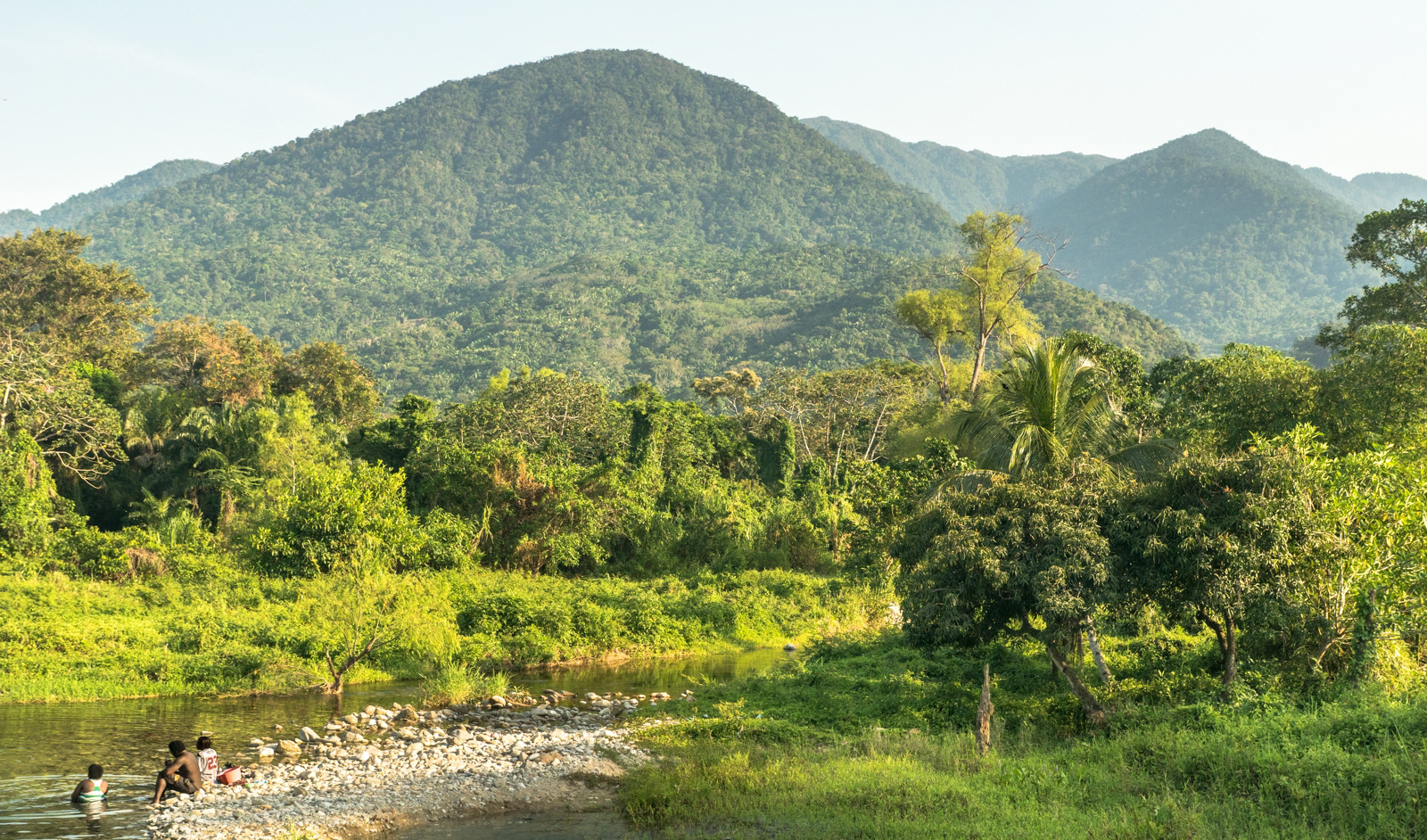 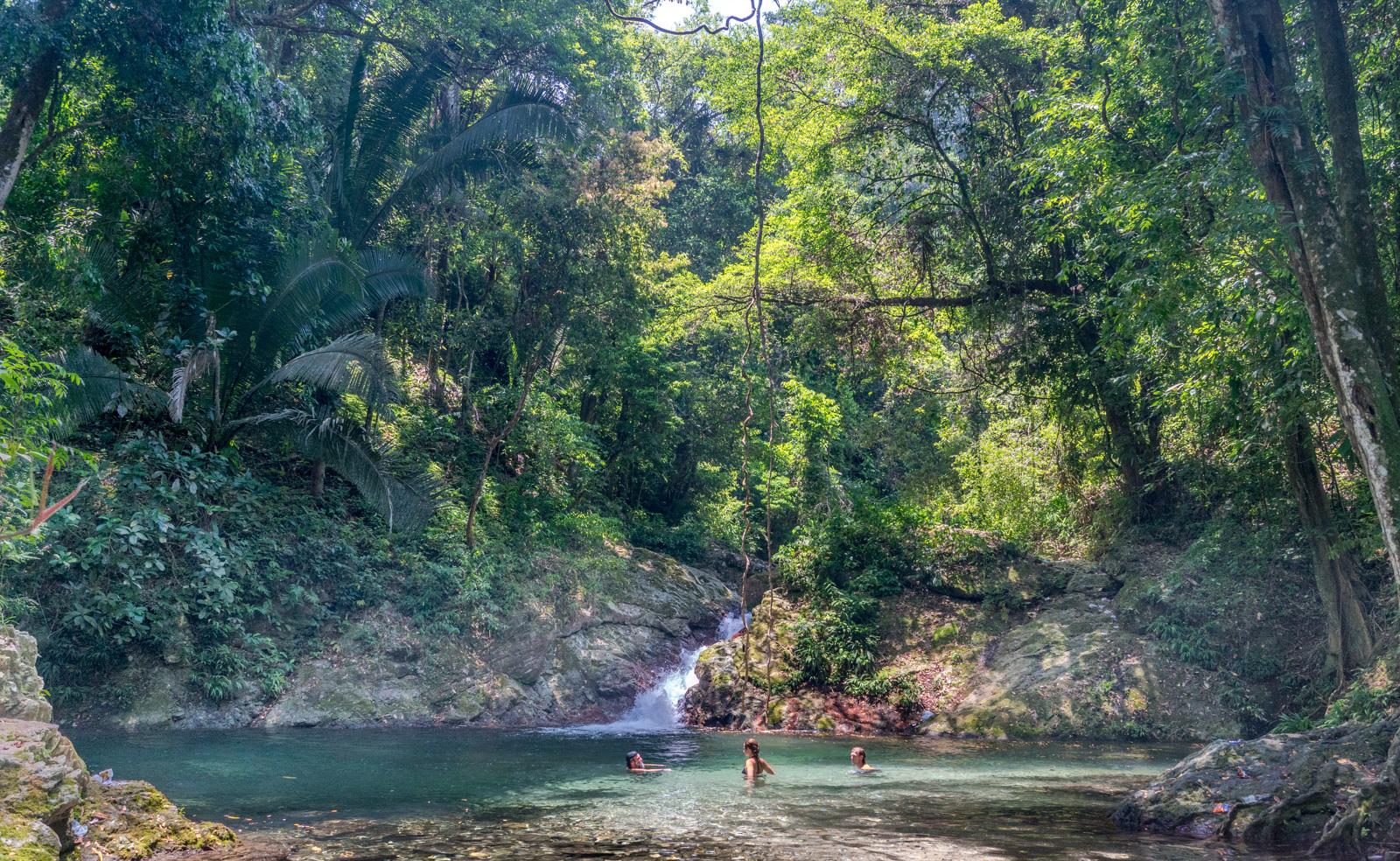 With the clock continuing to tick, it was time to head south to the border! Making one stop at D&D Brewery (where Mitch FINALLY got his IPA and tried to watch the Masters), we spoke with some locals and determined we would take the southern road to Nicaragua and avoid going through/around the Capital, Tegucigalpa. The road hugging the El Salvador border was amazing! Six lanes of freshly paved bliss! Something seemed a little odd though…there was almost ZERO traffic and none of the lanes had been painted yet. Is this too good to be true?!

YUP! Before too long the road turned to dirt/rock/sand…time for an adventure! We rode the next 60+ kilometers of the brown stuff feeling like we were back in Baja! At one point, Mitch thought it would be a good idea to take a little shortcut through a heavily sanded area, “Kid’s definitely an idiot sometimes”! The front tire buried quicker than you can say abracadabra and Mitch was eating dirt! Thankfully, there was a tuk-tuk coming down the hill (Justin was a little ahead and didn’t see the wipe-out) to help him pick up the pieces. He put the bike down hard enough to break the “un-breakable” Pelican Case that contains all his moto parts…not many things these days are “Mitch proof”. Good news was that the bike was still running fine and Mitch (apart from a bruised knee/ego) was also good-to-go. Pushing out the final couple kilometers we made it to the border around 5 and decided to cross the border even though it probably meant breaking our “don’t drive at night” rule. We made it through the border rather efficiently (for Central America), yet slowly, and drove three miles in the dark to Somoto Canyon Tours…We made it to Nicaragua!