El Salvador, the runt of the pack, is a little country sandwiched between Guatemala, Nicaragua, and Honduras. It’s perfectly situated on a beautiful stretch of the Pacific, has plenty of volcanoes to hike, and is littered with little towns and markets. Despite all of this everyone seems to brush it off, skipping it, heading directly towards Nicaragua or the Bay Islands, Honduras, in the luxury of their air-conditioned shuttles. But why?

Most of the rhetoric surrounding El Salvador appears to stem directly from the news & media coverage, which portrays El Salvador as a gang ridden, lawless land which is consistently competing with its northern neighbor, Honduras, for who is considered the murder capital of the world. While Justin would have loved to join MS13, earn a couple teardrop tats, and extort some peeps, the opportunity unfortunately didn’t present itself. All we found in El Salvador were kindhearted people, fantastic surf, and cheap fish. 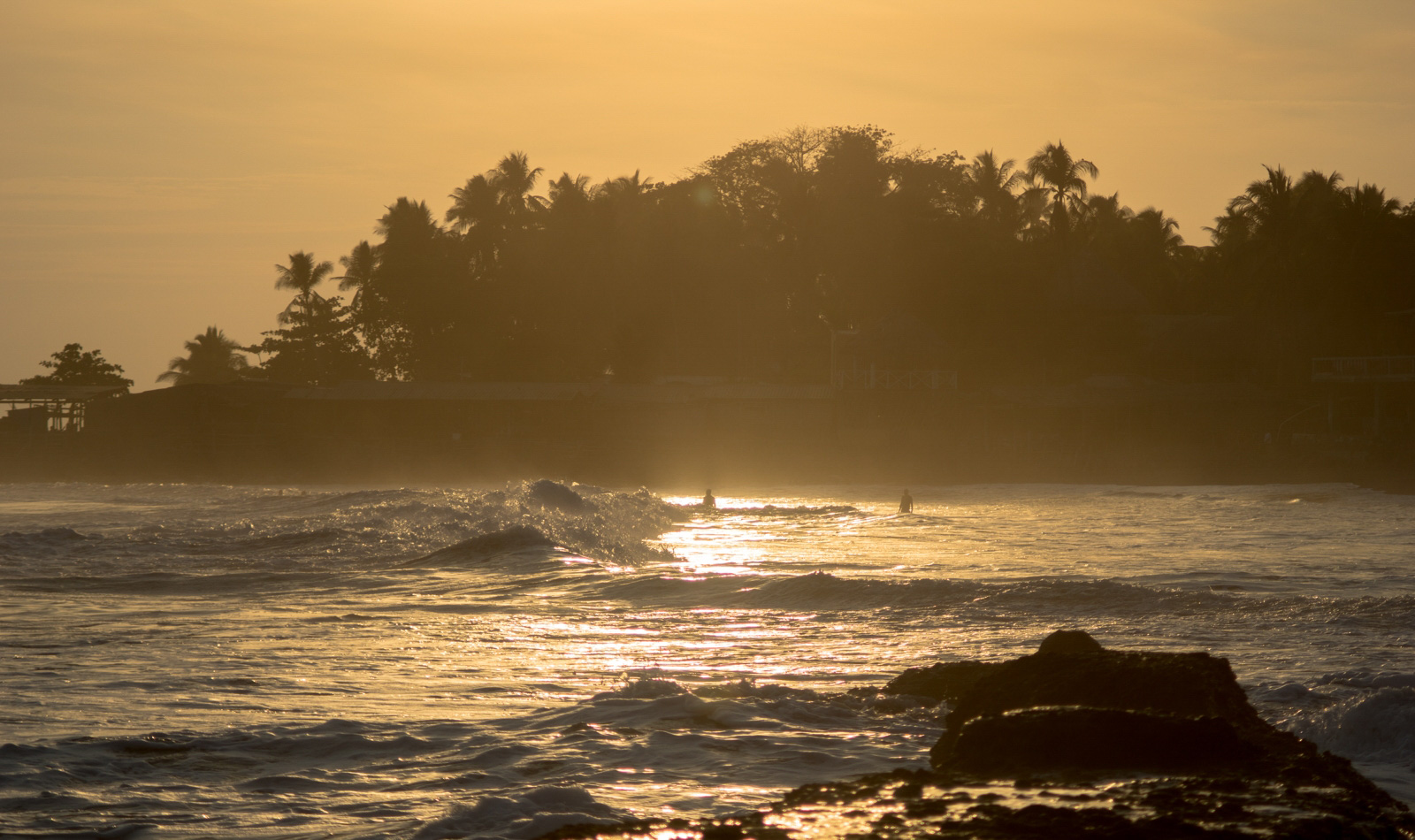 Crossing into El Salvador from Guatemala we immediately noticed the change in attitude. The crossing was the usual routine except leaving Guatemala took ages. While “Rosa´s” fat ass stuffed her face for lunch we had to sit in the baking sun waiting for her to re-open her little Aduana office and cancel our Guatemalan vehicle permits. After an hour and a half of sweating our balls off in the sun we were finally free! Driving across the bridge (Valle Nuevo) into El Salvador, the refreshing breeze cooled us.

We were immediately greeted by a friendly police officer who handed us the paper work and walked us through, line by line, the entrance process. This was quite the change from the obnoxious border helpers who typically are trying to shake you down for money or currency exchange. With the police officers help, we had our most efficient border crossing to date (good start El Salvvy)! He stood watch over La Tortuga and El Tracktor, shotgun in hand, while we took care of Immigration and Aduana in the comforts of A/C, how lavish!

From the border, we booked it towards Santa Ana, the second largest city in El Salvador. Now we hadn´t heard much about the actual city, just that it was a good base to hike Volcán Santa Ana, and that there was an incredible hostel there, Casa Verde. Upon our arrival, Carlos immediately made us some local coffee, showed us around the hostel, the town, and how to find the best pupusas in the world! Pupusas filled our missing Mexican taco void. Greasy corn tortillas stuffed with varying types of meats, beans, cheese, street animal, and/or veggies…all for the low low price of $.50 (El Salvador uses the US dollar exclusively).

We spent our time in Santa Ana exploring the city by bicycle, sampling the street food, and hiking the volcano, which was an easy hike in comparison to our volcano adventures in Guatemala.  The only difficulty came at the summit where winds approached the speed of light! Mitch definitely thought his smaller, leaner, companion would be blown back to the States! 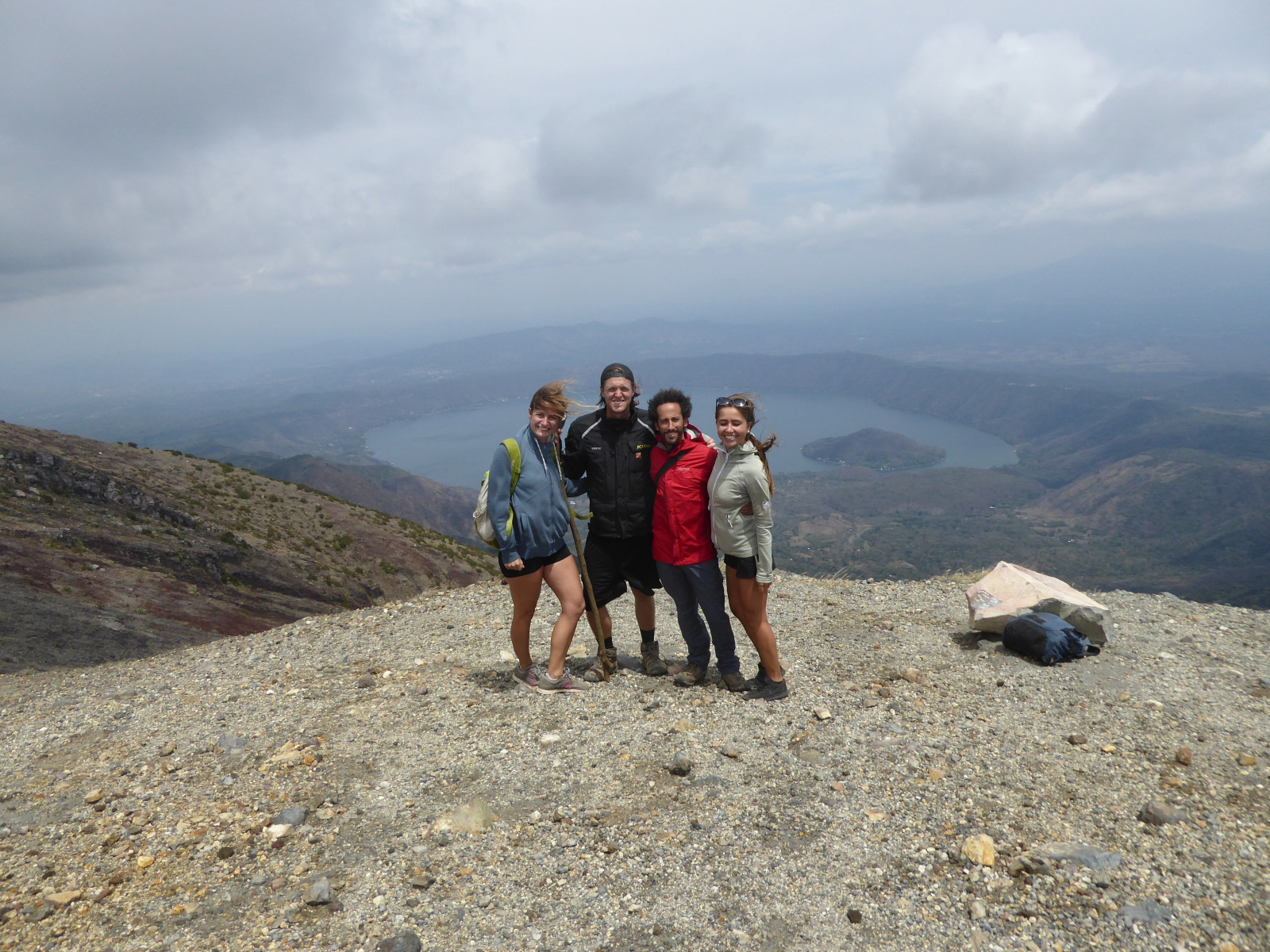 A 60 KM stretch of some of the best roads we’ve driven in El Salvador…Ruta de Las Flores stretches from the Guatemalan border in Tacuba to Sonsonate in the south. It smelt like coffee (and flowers of course) and the curvy mountain roads were littered with plantations and blooming flowers. We couldn´t get enough of the road! Dropping our panniers (not panty’s) in Juayua we drove for hours getting lost in the mountains. It was fricken sweet!

Juayua was a sleepy town with not a whole lot to do…except (to our pleasurable surprise) the weekends, when it transforms into a massive food festival! Street vendors line the streets roasting and BBQing anything from rabbit, sheep, and pork loin to filet, fish, and shrimp. Clearly, we had to sample the eats, and for good reason. It was fucking scrumdiddlyumptious! 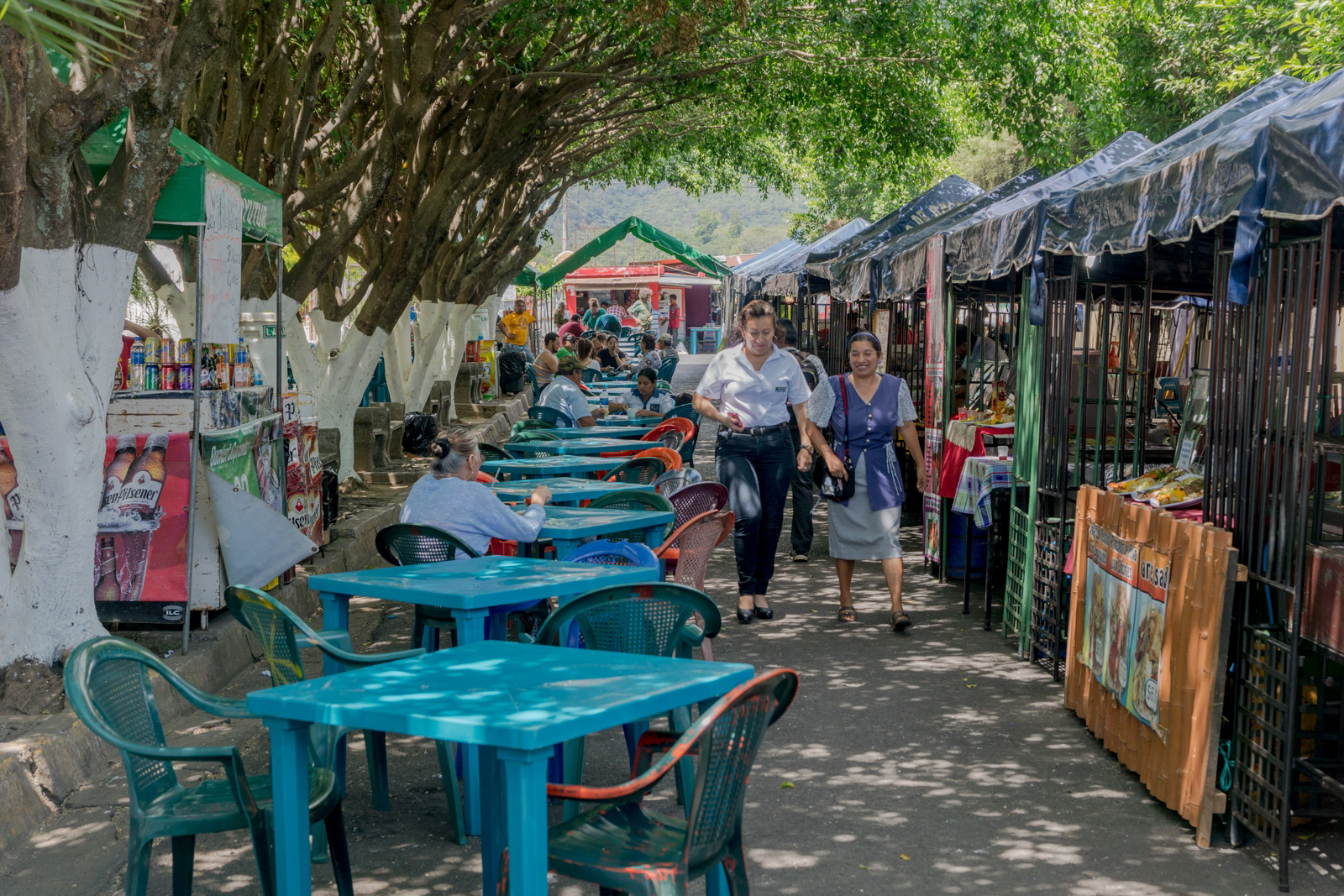 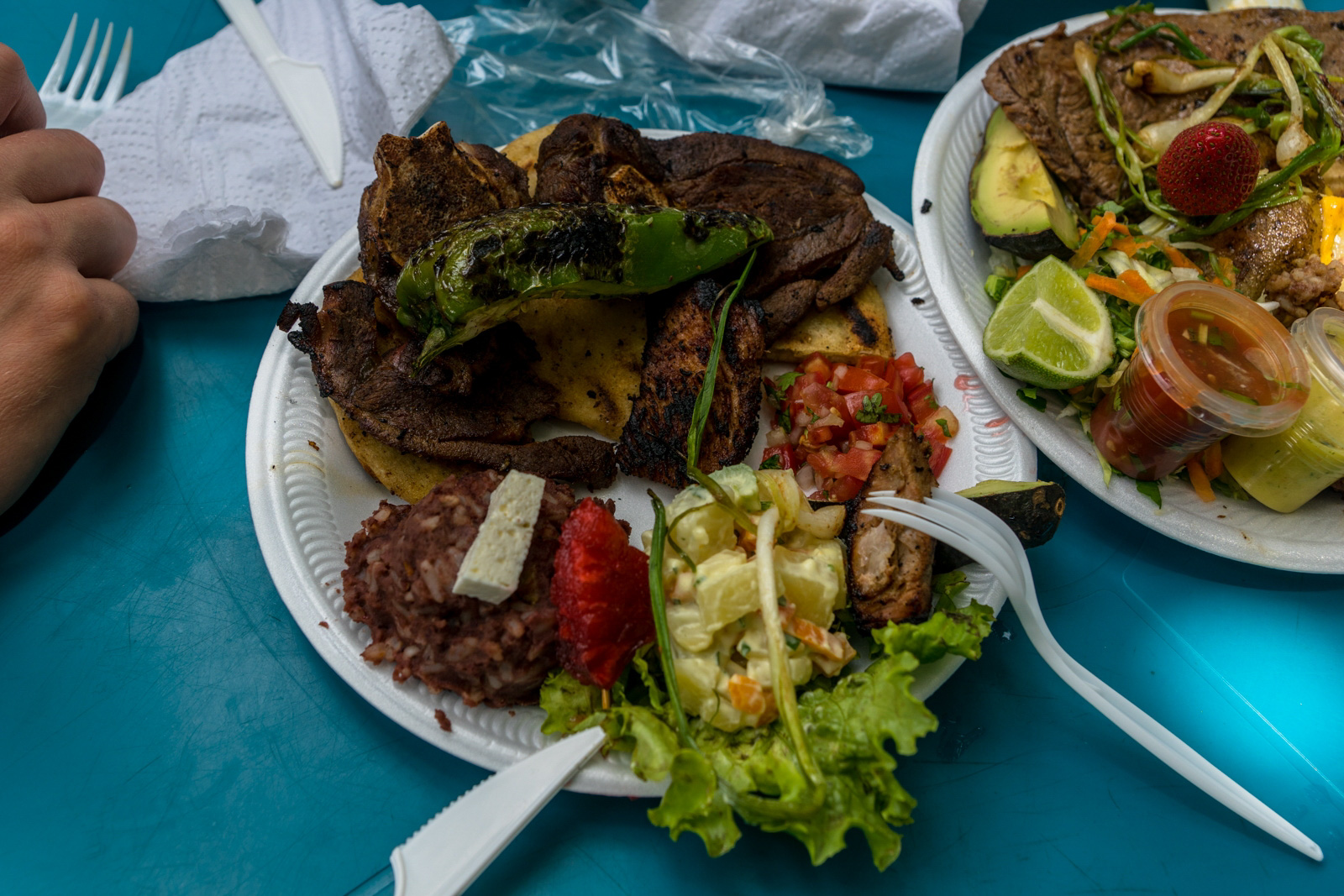 Working off our gluttonous meal we decided to go for a hike with some locals to explore waterfalls. We argued over having to take and pay for a guide but about 20 minutes into the hike we realized we would have never made it! It would have been like filming an episode of Naked and Afraid (only Mitch ACTUALLY got naked). We spent the next 6 hours following closely behind our guides as they bushwhacked through the jungle and coffee plantations chopping a trail and leading us down waterfalls by rope and handlines. 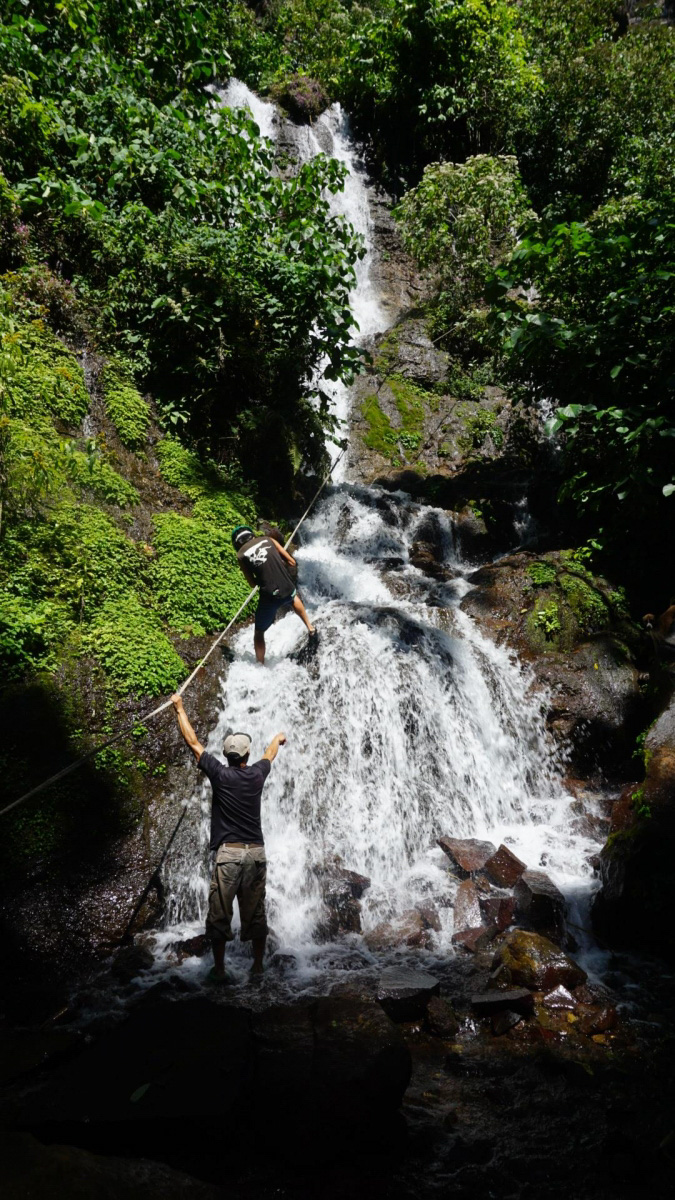 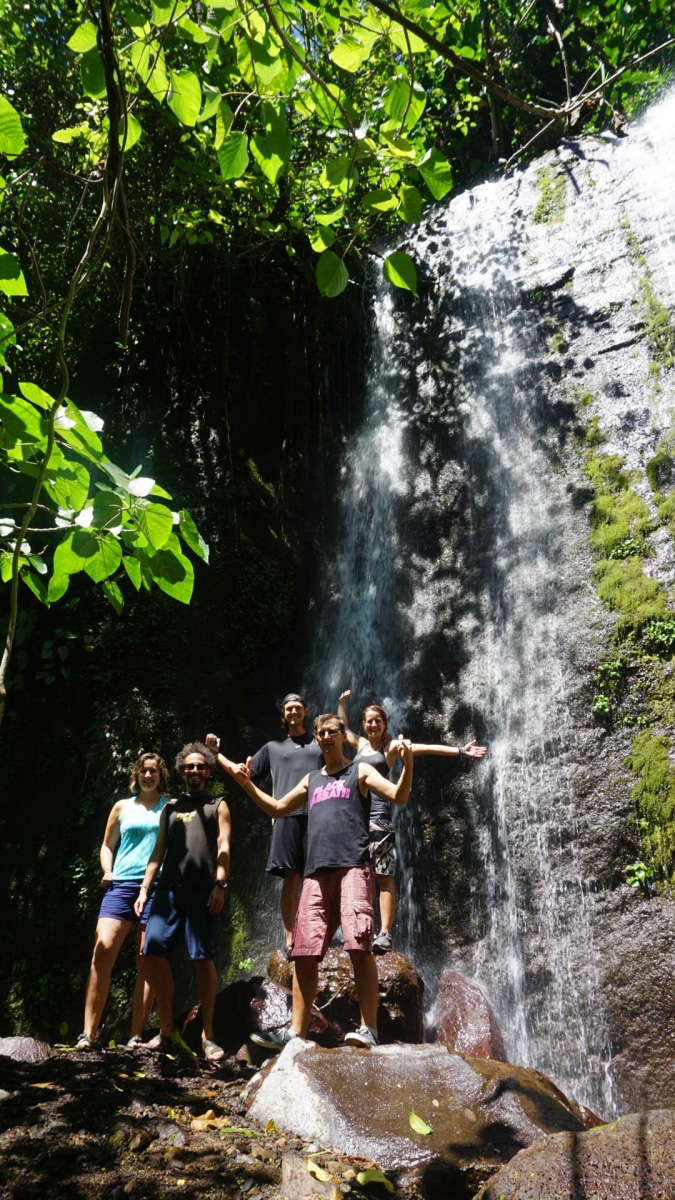 The nice thing about El Salvador, besides using the U.S. dollar, is that everything is close. A nice change from the terrible roads and long distances of Guatemala. From Juayua we headed to El Tunco. For weeks’ backpackers told us how we had to go to El Tunco, but honestly if you didn´t surf there’s really no need to go there. The beach was rocky and the sand was black…Fucking black sand! It may seem cool but it’s completely unpractical…hotter than the Kate Upton leaked pictures (google her if you’re unsure – it means HOT). There was NO WAY you could set foot (or ass) on it during the day. 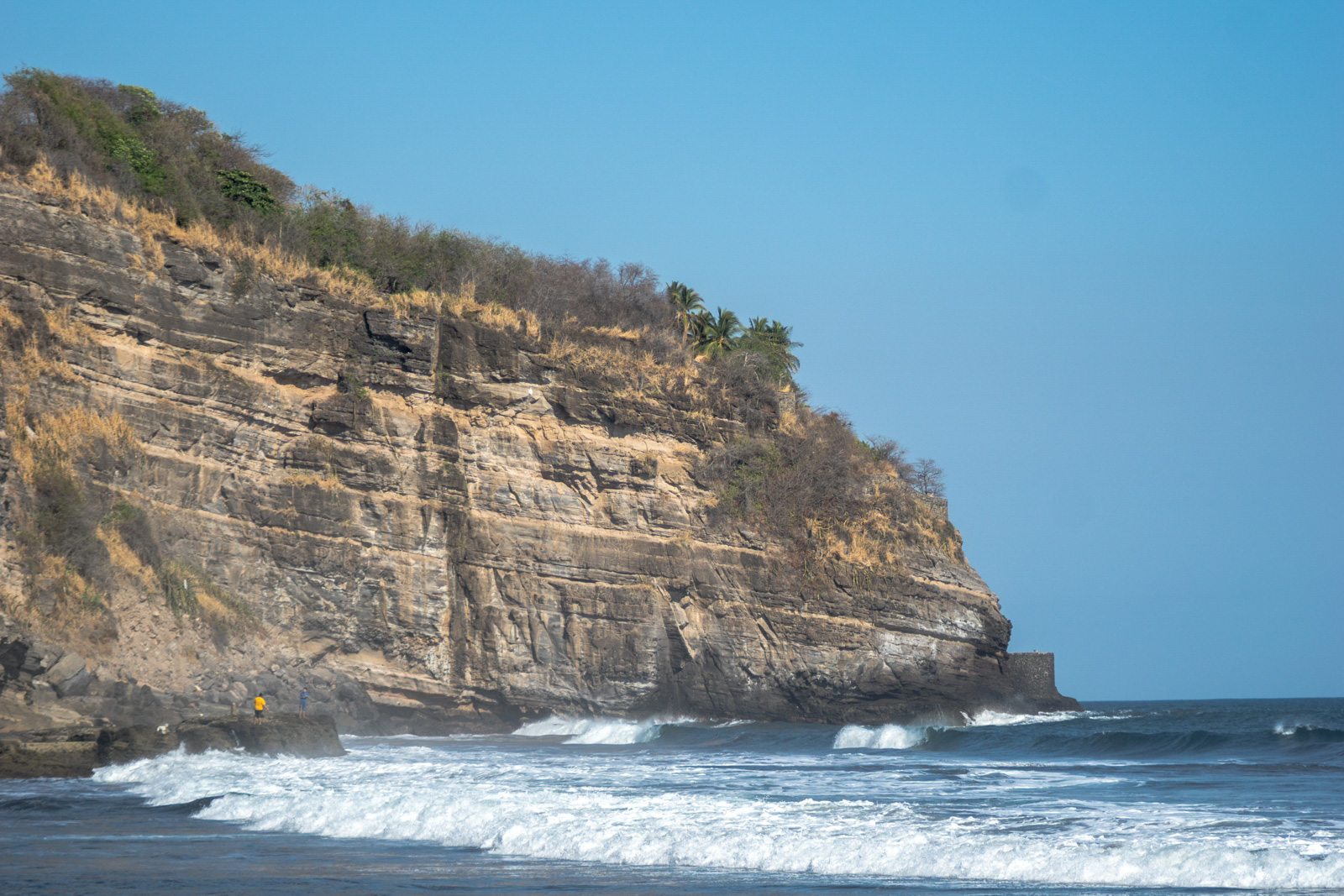 Mitch (somewhat bored) made friends with some Canadians and spent his days trying to figure out how to avoid sweating through ANOTHER pair of underwear and playing cribbage.  Justin on the other hand, had a blast surfing! Shocked at how crowded the main breaks where he ended up surfing the points at El Sunzal or El Zonte, which was his favorite. It was fun, head-high, peeling rights that lasted hundreds of yards. 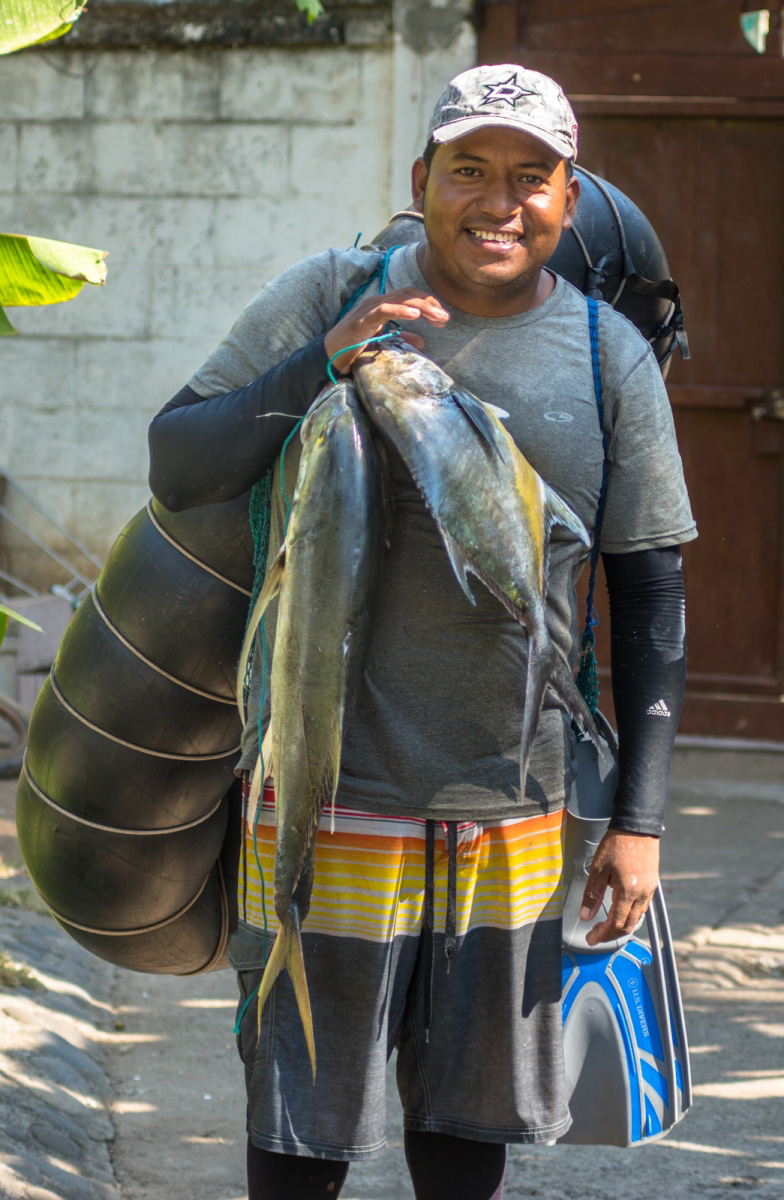 Towards the end of our stay the surf got too large. Pushing double-overhead there was no way Justin was going to paddle out alone, and it was too damn hot to do anything else so the bags were packed and we all headed up to some local waterfalls for a dip and some cliff jumping! 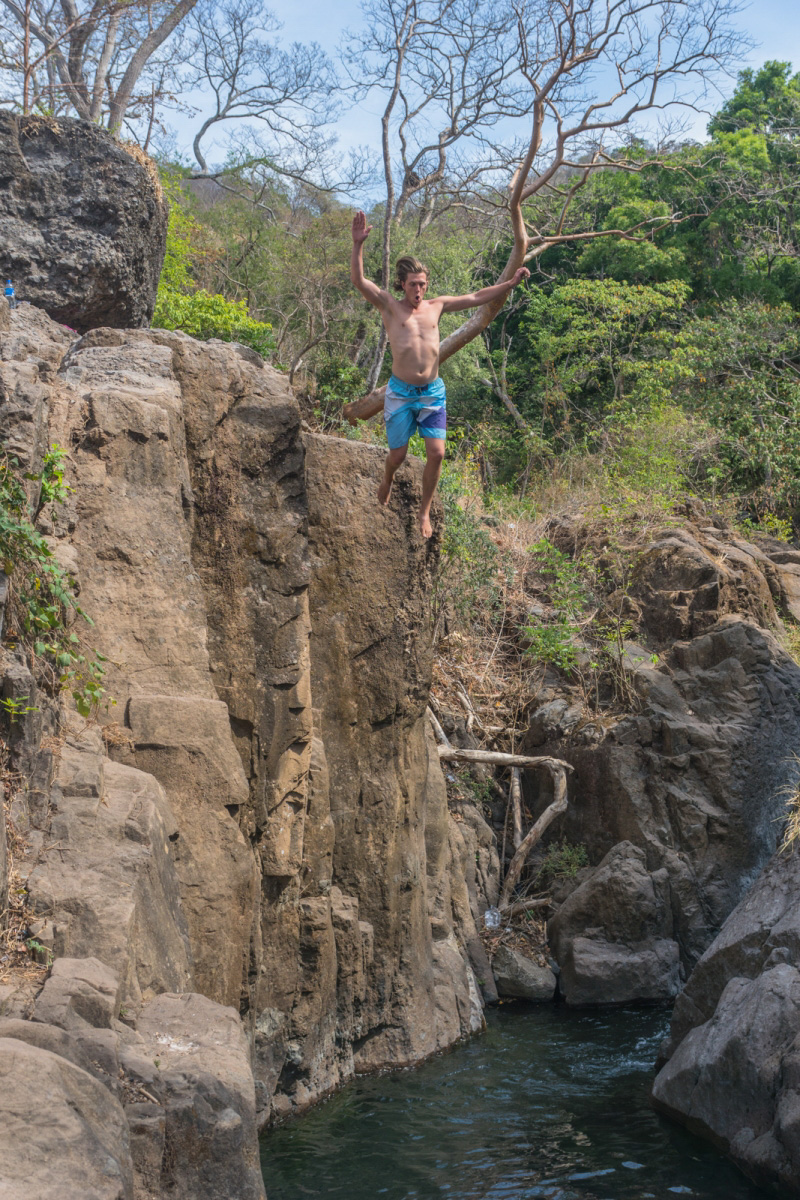 FINALLY, Gabe and Autumn caught back up to us and we all decided to rent a house on the beach for a few days in La Perla. Now La Perla isn´t a tourist destination, but being 30 minutes from El Tunco it was close enough to the surf spots and markets, but far enough to keep all the pasty tourists away and the prices low. We all ended up falling in love with this village and the people that lived there! The house was spectacular! It sat on our own private stretch of beach with hammocks and a swimming pool, an open-air kitchen, and 4 massive bedrooms. After a couple rums we concluded that this could be our very own hostel! We spent our days devising a plan to turn the place into a hostel even coming up with it’s name “The Black Pearl”…La Perla, duh. Mitch would serve up world class cocktails, Gabe and Antonia would run the kitchen, Justin would lead the surf tours, and Autumn would teach Yoga poolside! It’s the perfect plan! We don’t even need to leave to get supplies! The locals, stylishly bumping 90’s music, drive by daily delivering fresh fruits, veggies, and bread. Our boy, Javier, handlines fish religiously from his inflatable inner-tube and sells us his catch for $1 per LB (yeah yeah it’s a little pricey for tuna)…Does anyone know a good lawyer in El Salvador?! Seriously…. 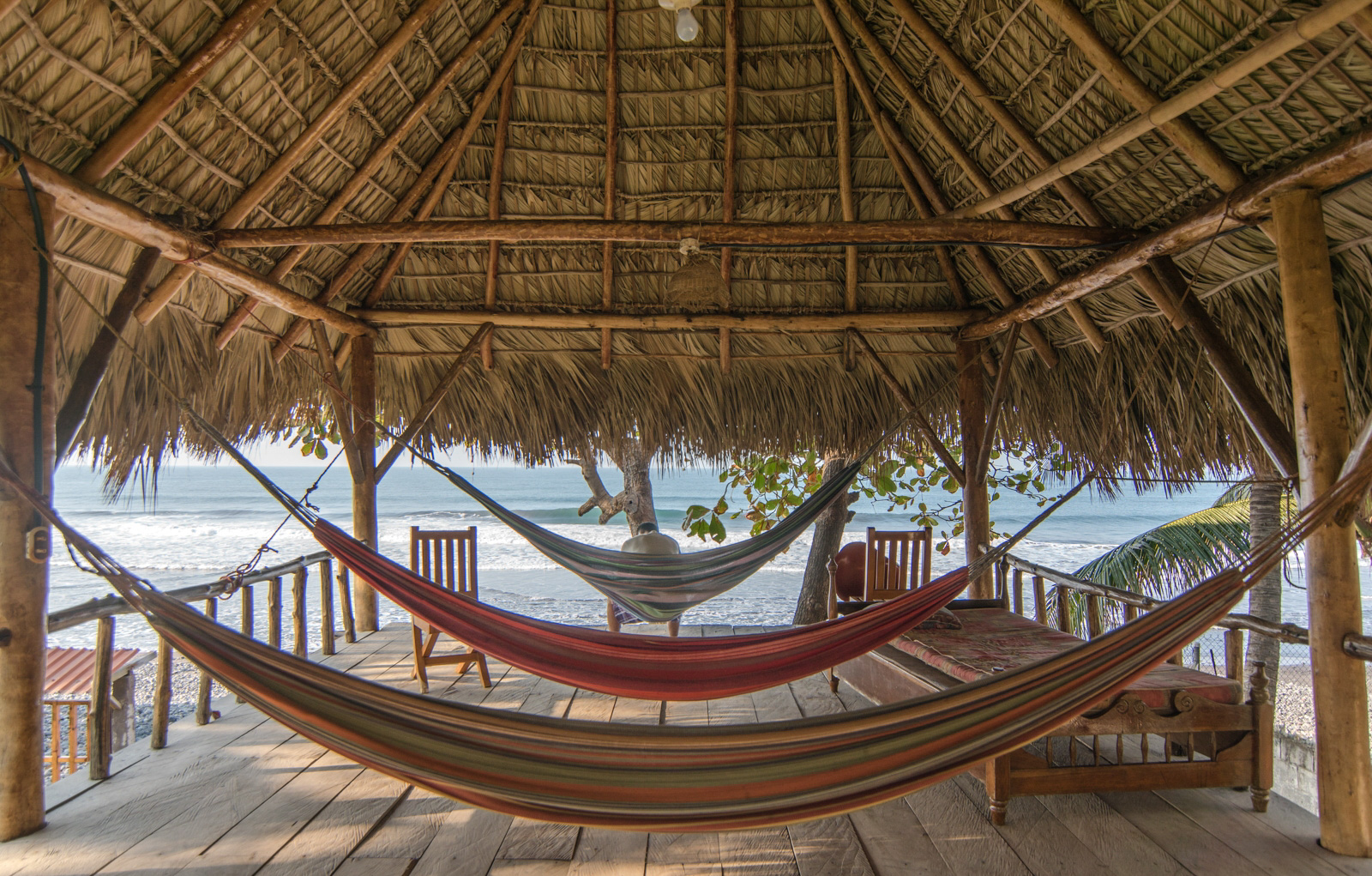 While Gabe and Autumn couldn’t pull away from The Black Pearl, we had to split. Next stop, Honduras!