If you’ve been following along you know a large chunk of our time in Guatemala was spent driving the epic, but absolutely fucking terrible roads, and hiking as many volcanoes as we could. Per usual, time slipped away from us and before we knew it we had spent almost 5 weeks in Guatemala. Two of those weeks we stayed in one location immersing ourselves in the Guatemalan culture by enrolling in Spanish School in Xela. El Mundo en Espanol here we come!

Xela is the nickname given to Quetzaltenango. It is a tongue twister of a name confusing gringos and locals alike. Despite being the second largest city in Guatemala, the old town historic area remains quite quaint and colorful. If we hadn’t decided to take Spanish class here we probably wouldn’t have made the journey to this beautiful colonial town. We figured it would be a perfect place to touch up on our Spanish as some of our other options (Antigua or Lake Atitlan) had WAY too many distractions…terrible for Mitch’s ADD. 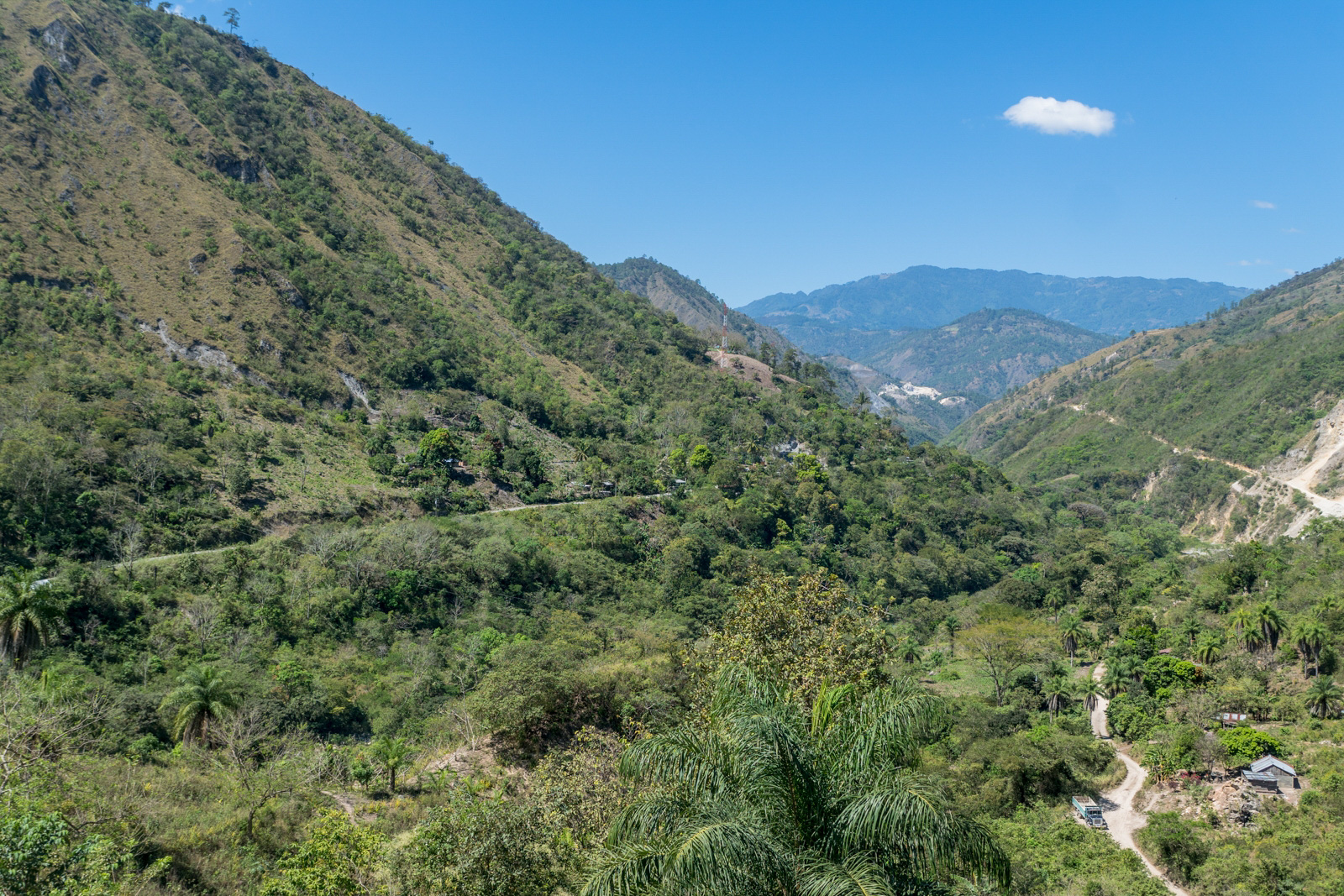 Once we arrived to Xela we were introduced to our host family. Elena, who would be our Momma for the next two weeks, was fantastic! Elena was a seasoned veteran at hosting students, she’s been in the game for almost a decade. Also living in the house, was her son Jarvis, and “the energizer bunny” 5-year old Samantha.

While Elena was the mom of the house, Samantha ran the place and provided the comedic relief. Her mood changed 6 times a day (typical woma…5 year old) and she was a feisty little nugget. She was also a sweetheart. She loved having us around and we loved her! While she won’t admit to it (well she let it slip once, “eww gross”), Mitch was her true “Novio”. Some of her favorite things oddly included watching Mr. Bean (daily), belching during/after dinner (“oopsy” was her typical response), and ripping all the hair off her dolls. 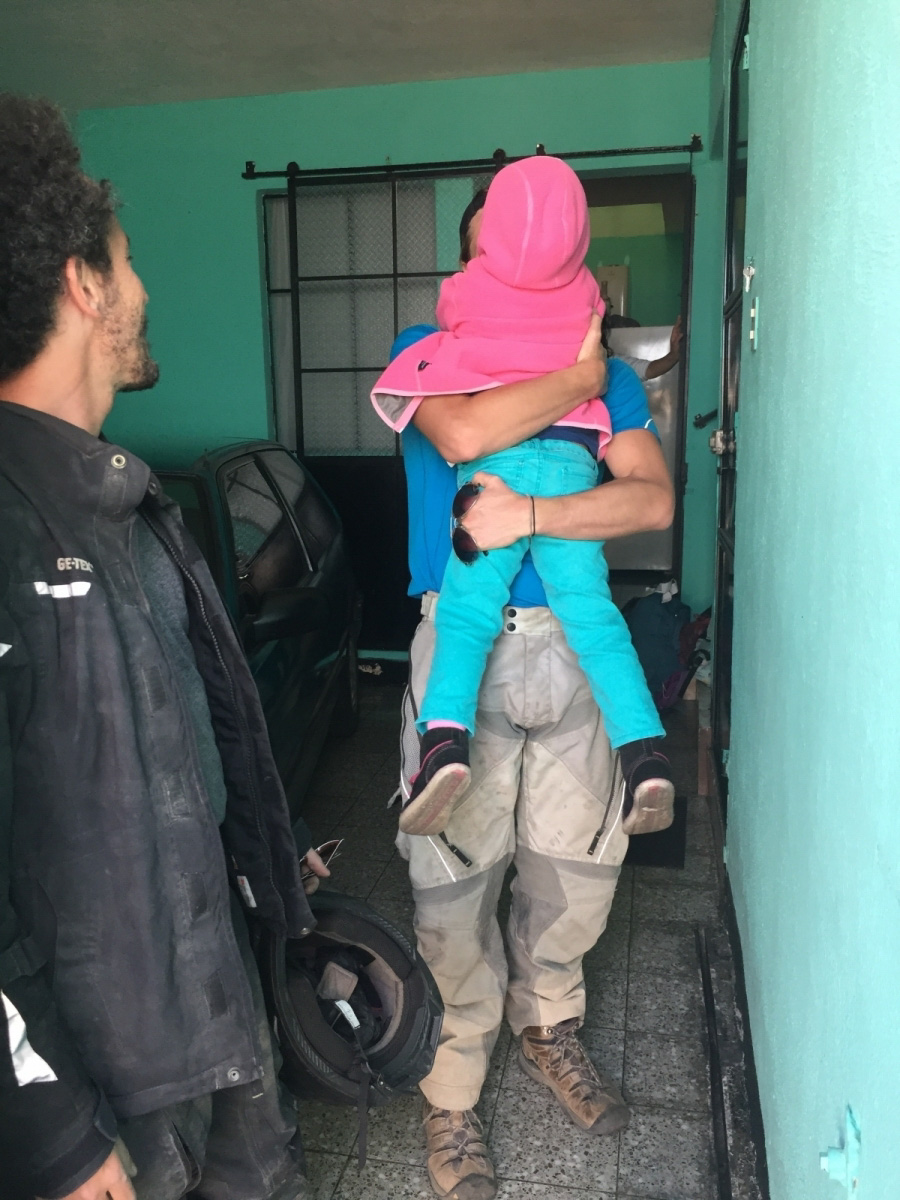 When Elena wasn’t busy chasing after Samantha she was busy making sure the house was clean and we were fed properly. Her day typically started around 5 AM, she’d clean the entire house before getting breakfast ready…rinse and repeat…We’d come home from class and lunch would be made, and again dinner after our afternoon studies. Elena quickly learned and knew exactly what we all liked/wanted – more meat for Gabe, hot sauce for Mitch, and cheese for Justin. She truly made us feel part of the family beginning Day 1. 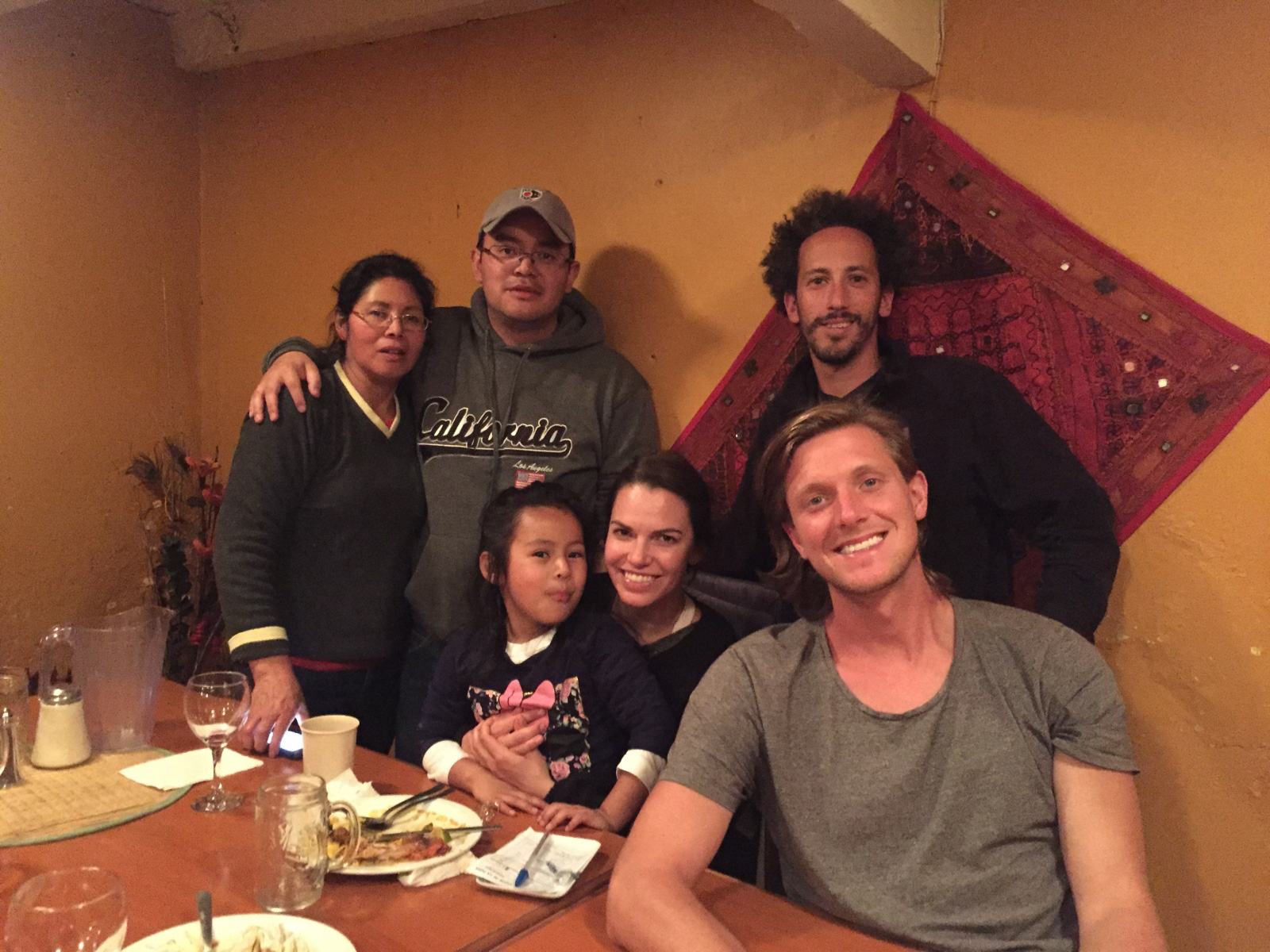 Spending two weeks with the family gave us an opportunity to learn A LOT about Guatemala. There is no easy way to explain it, but time and time again we heard countless stories of struggles, abuse, and the hardships of growing up in rural Guatemala, primarily for females. Indigenous people in Guatemala today also face many challenges, including hunger and malnutrition, lack of access to medicine and birth control and a lack of basic education—much less any opportunity to develop more advanced business and entrepreneurial skills. All of these issues are heightened when it comes to women, who have to deal with what’s known as machísmo, the chauvinistic culture that gives power and value to men and boys over women and girls. Rural indigenous Mayan women in Guatemala rank at the bottom of almost every statistical measurement of human development. Only 14 percent complete the sixth grade, and more than half of women are illiterate, oppressed and living in poverty. 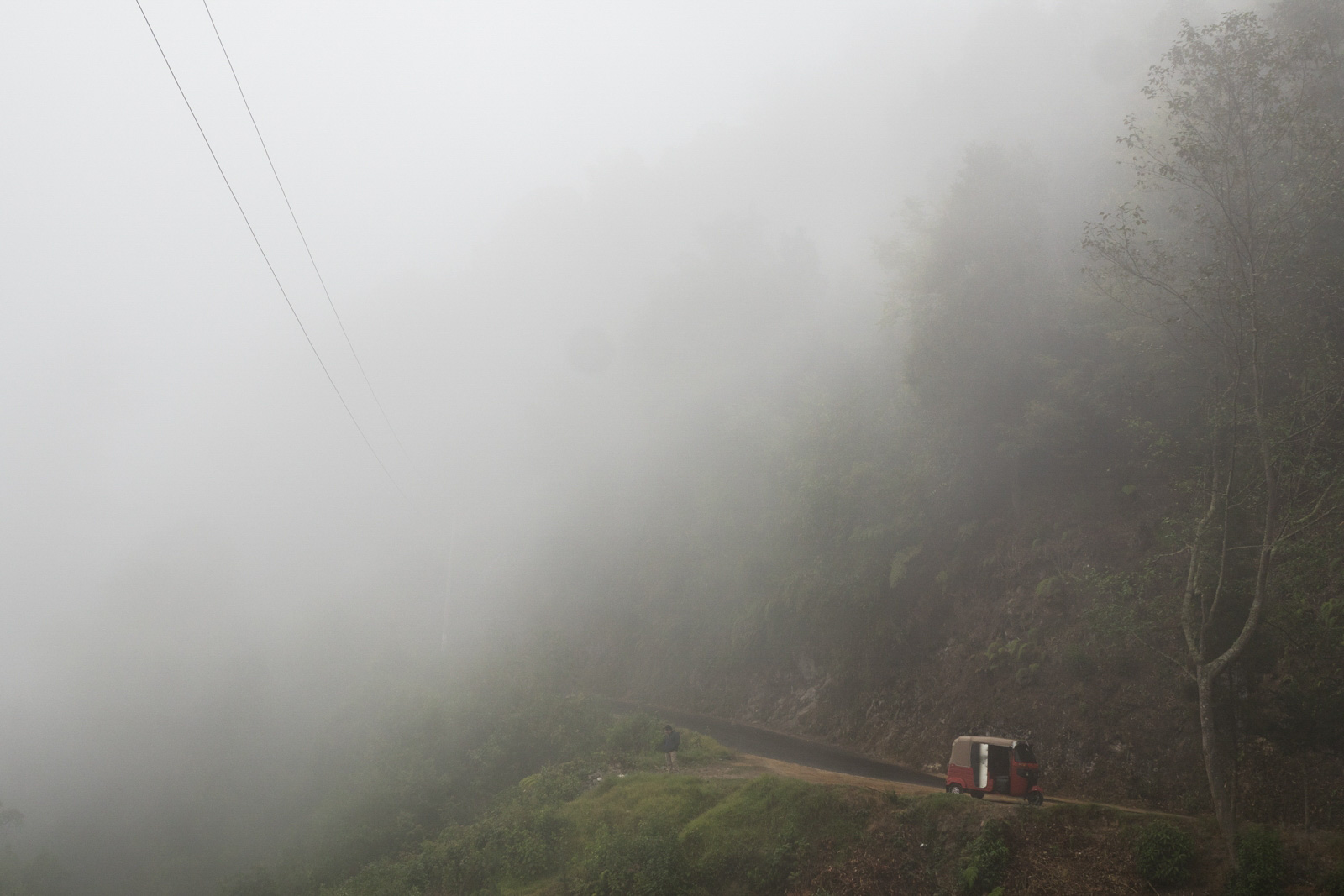 Having class 4-hours a day was a lot harder than either one of us expected. Class promptly started at 8 AM…and were one-on-one sessions 100% in Spanish. We left each day with our homework, a scrambled brain, and a new appreciation for the language. Our sessions ranged from basic conversation and vocabulary to varying verb tenses and some cutthroat Scrabble games, which Mitch and his cheating Maestra typically won. 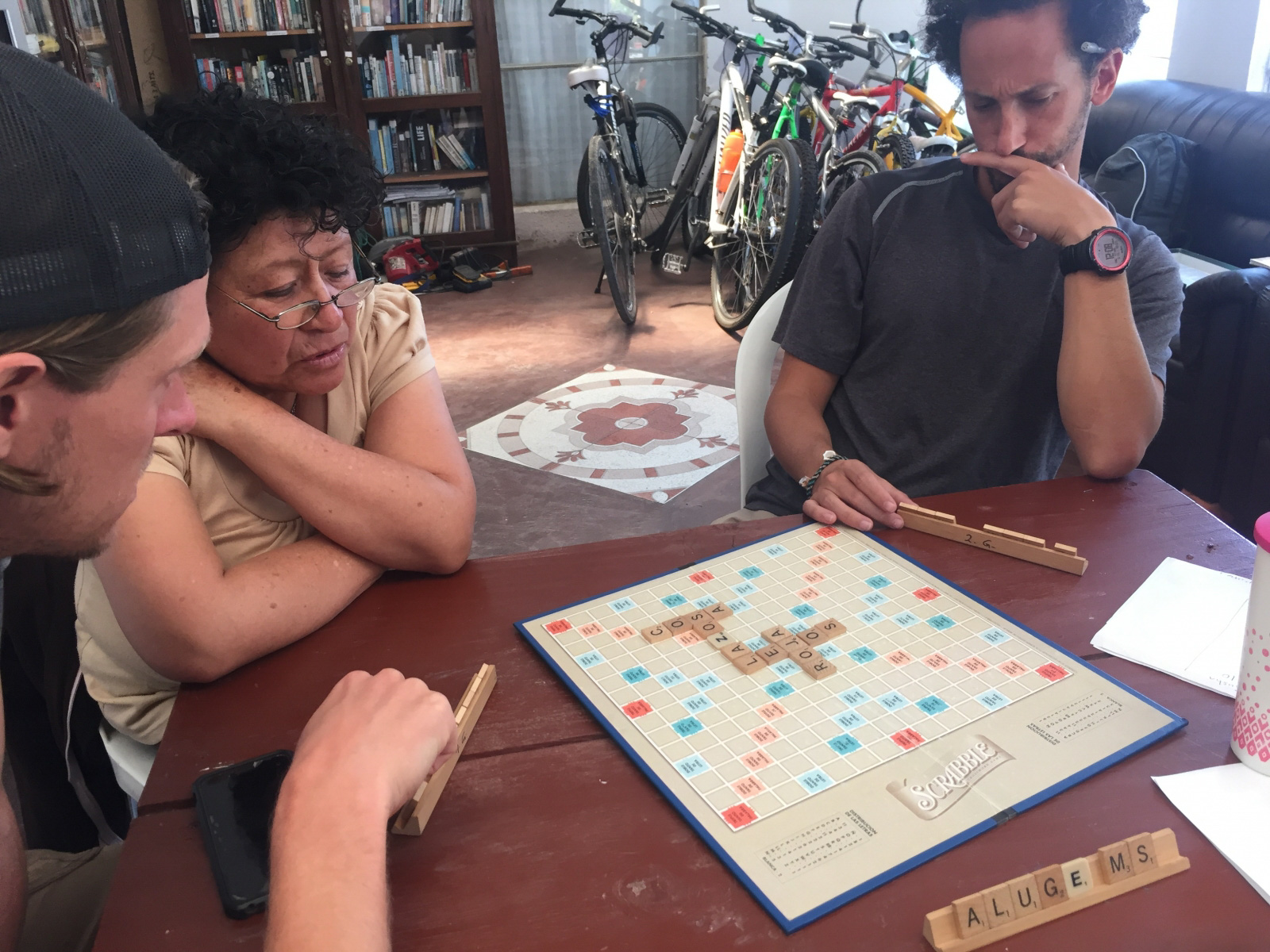 The amount that we learned was incredible, but it didn’t stop with school. El Mundo en Espanol also took the time to teach us outside of class. We made homemade chocolate from Cacao and even took salsa lessons (crushed it)! Overall, it was an amazing experience and we were all sad to say goodbye to our teachers and host family, but Justin’s “real family” was heading to Guatemala! 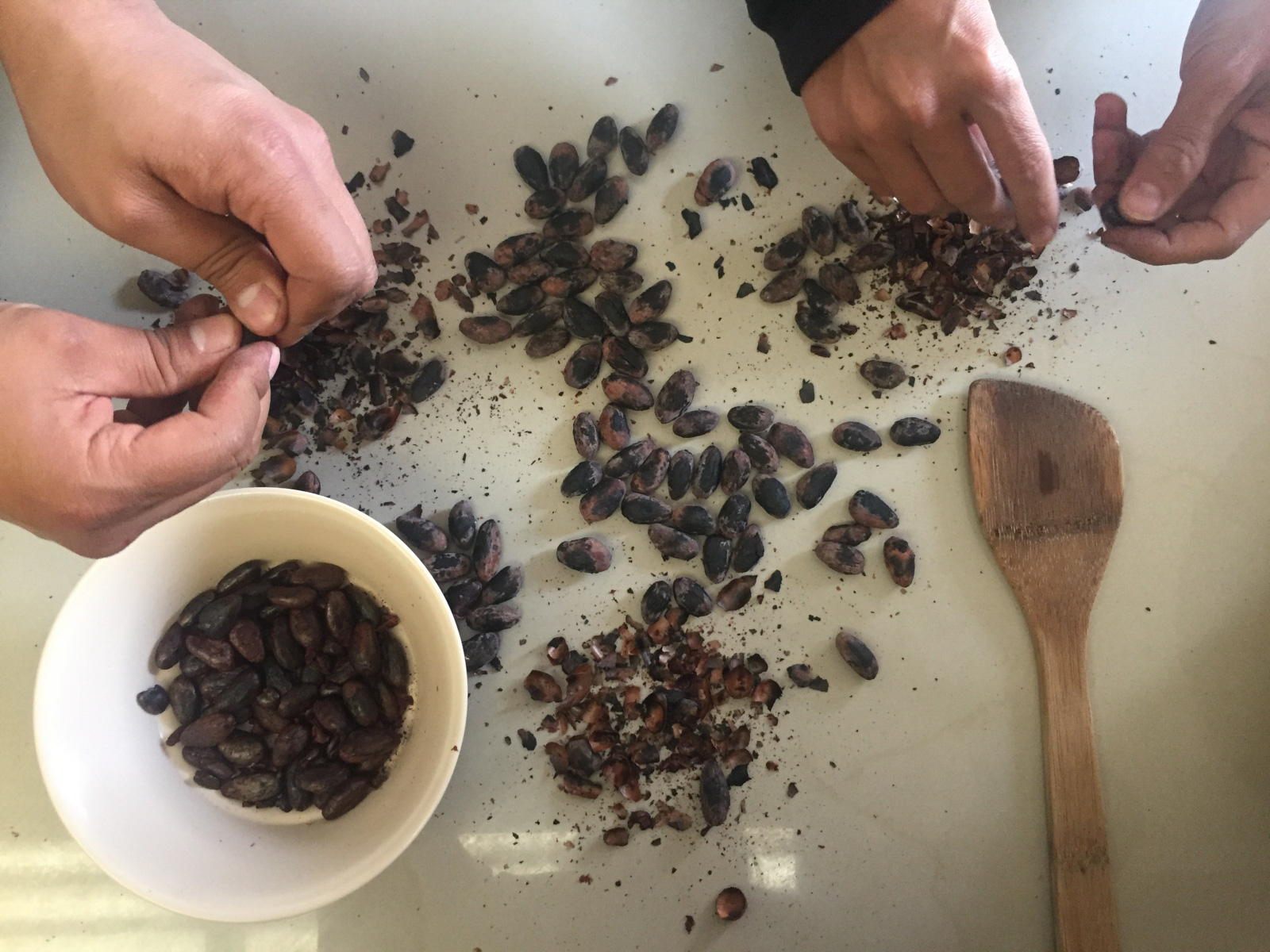 Arriving back in Antigua dusty and exhausted from a fridged night camping on top of Volcano Acatenango Justin met up with the rest of the Lewis clan, while Mitch headed to the beach with his buddy Rick who was visiting from Denver. It was a fun few days in Antigua wandering the markets, eating, and sharing stories from the road.

From Antigua, the whole family headed towards Lago Atitlan. Justin’s mom rented a house about 20 minutes outside San Marcos in a place she called “heaven”. She had heard about it on TV and in magazines and she just couldn’t get it off her mind!

Now what she didn’t expect was the hellish ride down to San Marcos. Welcome to Guatemala Momma! It’s a country with no straight roads where potholes and dirt are the norm. But what makes the ride down to San Marcos particularly hellish was the fact that it dropped down from the main highway about 1000 meters. The road was steeper than any Black Friday discount, Shit! During one particularly arduous section, Mitch lost complete function of his back break! NOOOOO! Navigating the slopes only using his front break and quickly shifting to 1st gear he safely made it to a flat spot to let his bike and breaks cool down – Talk about an adrenaline rush! The problem was clear, someone needs to flush their back breaks…Mitch has always learned lessons the hard way! 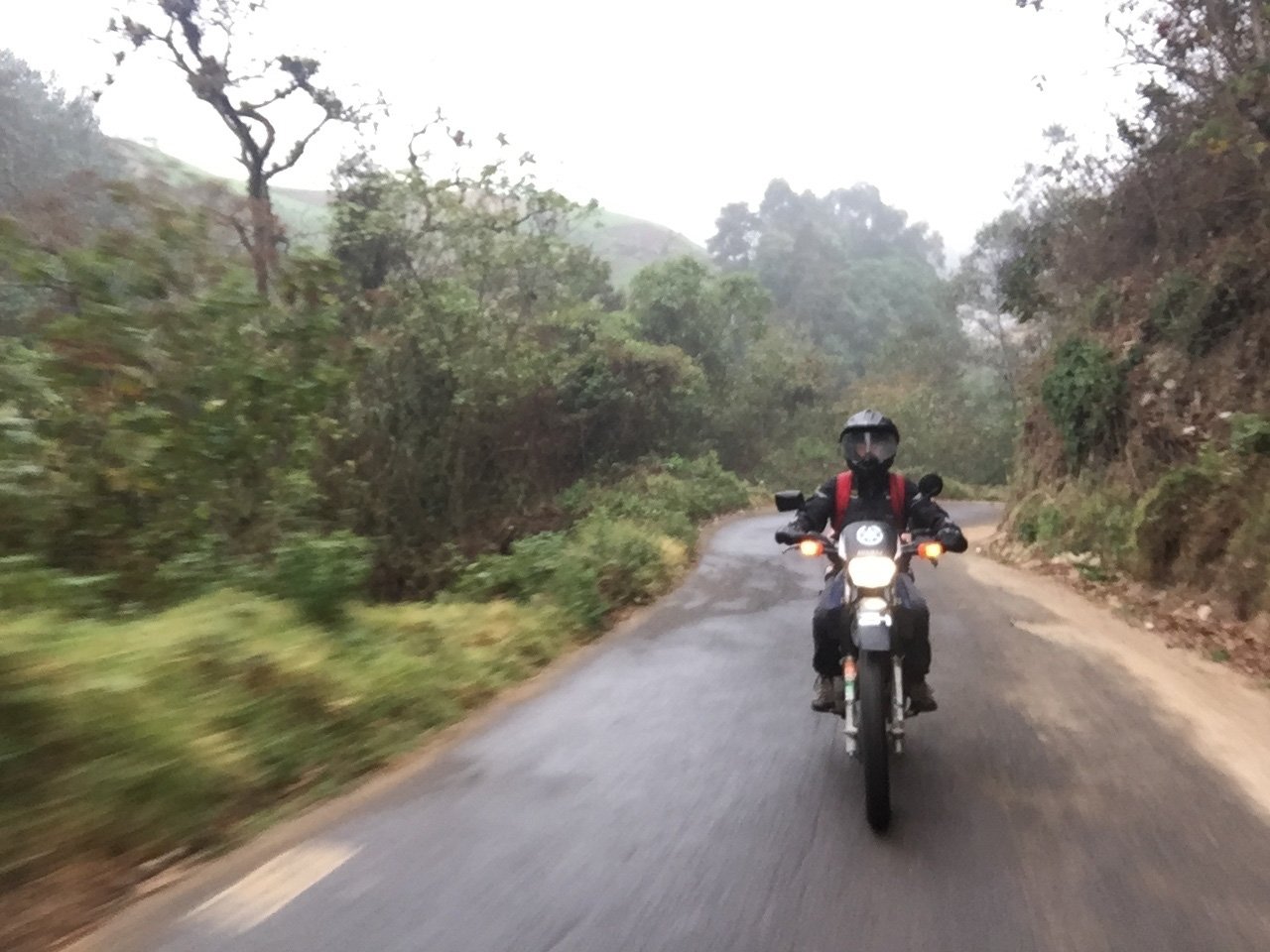 As the old adage goes “It’s not the destination, but the journey that matters”…it made arriving at Pasajacap extra special. The place was truly magical. The weather was perfect! The views of the volcanoes were stunning, and you could see the lake from any room in the house!

We didn’t do a whole lot, but you didn’t need to. Lago Atitlan is all about simply relaxing and enjoying the views. Well and crystals (we laughed for hours talking about our “crystals”), yoga, and whatever bullshit the hippies in San Marcos will try to sell you. We lounged on the dock, in the hammocks, and under the palapas. We took the water taxi to neighboring villages to wander the markets and to simply be on the water. 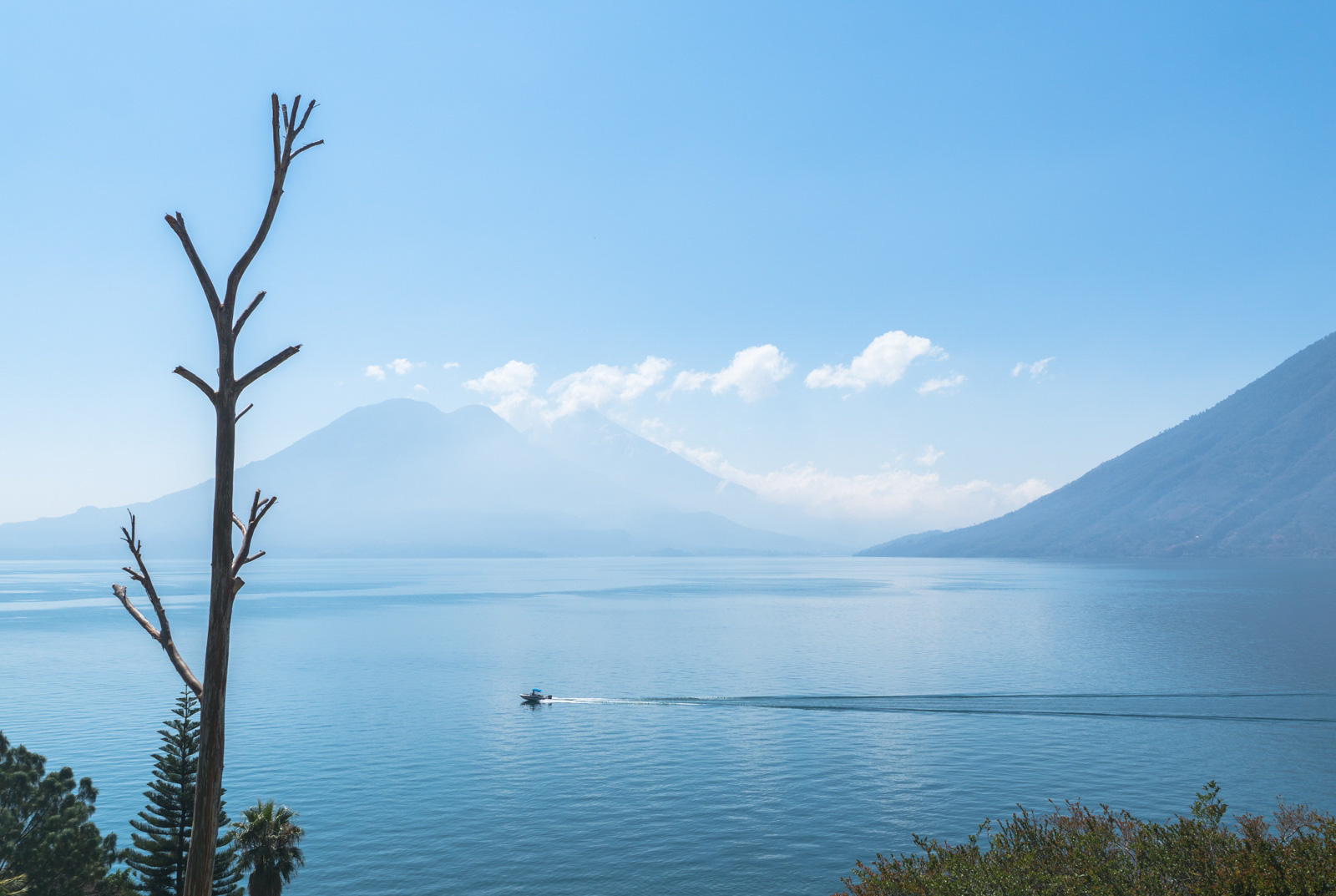 Outside of the house our favorite activity was eating…specifically lunch at Cafe Artisano, and the cooking class Justin’s mom had arranged with Anita. Central American food is good (kind of), but after 5 months on the road, corn tortillas begin to taste like cardboard so when Justin’s mom booked lunch at Cafe Artisano the Guys were beyond pumped! The owner hand makes over 30 artisanal cheeses, cures his own meats, and has an incredible selection of wines. It’s safe to say we feasted! 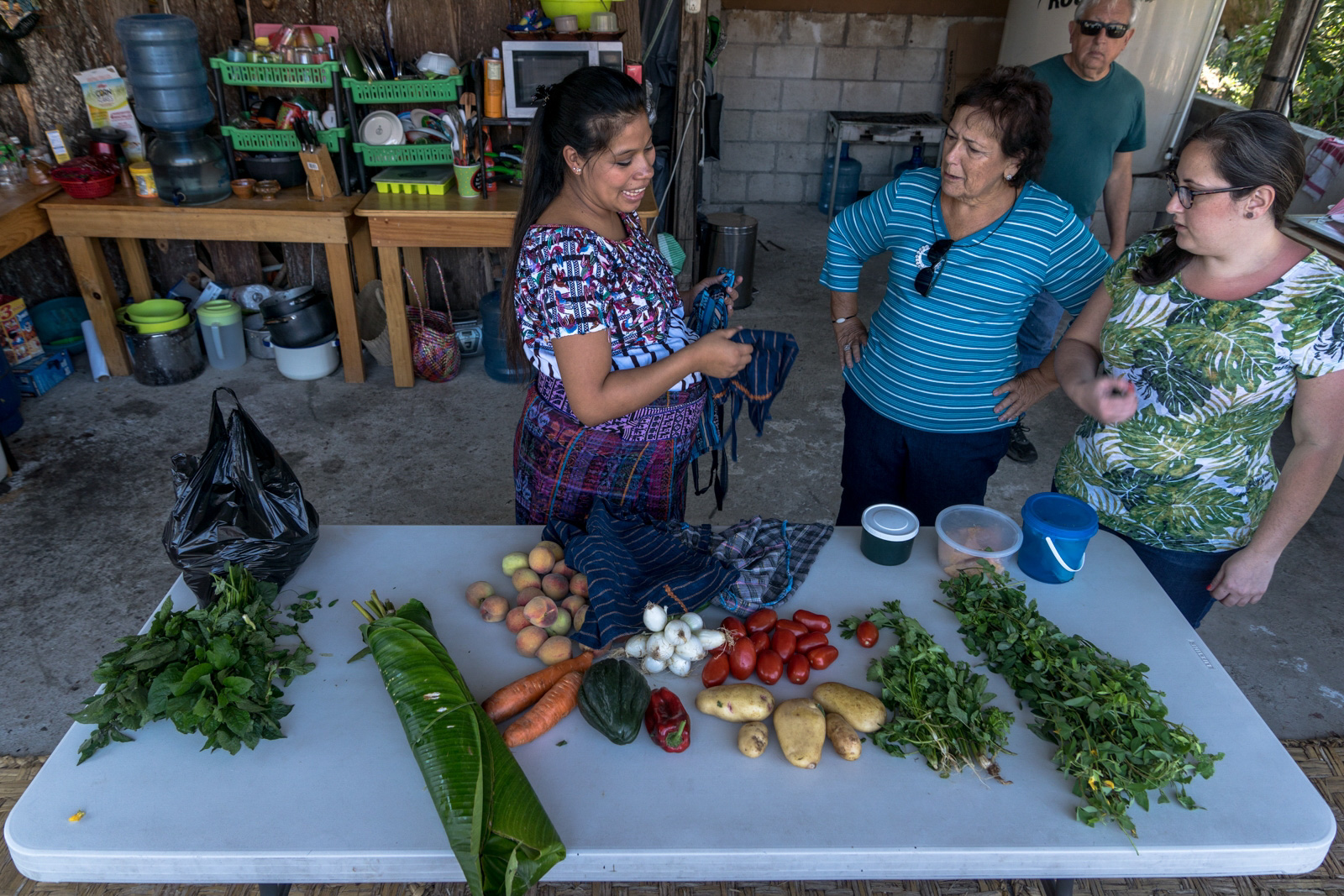 In a more traditional manner the feast we made with Anita was equally as delicious. It started off with a group trip to the market where we made handmade tortillas and hand selected our ingredients. We decided to make Pepian, a traditional Guatemalan strew. It was hearty and delicious. 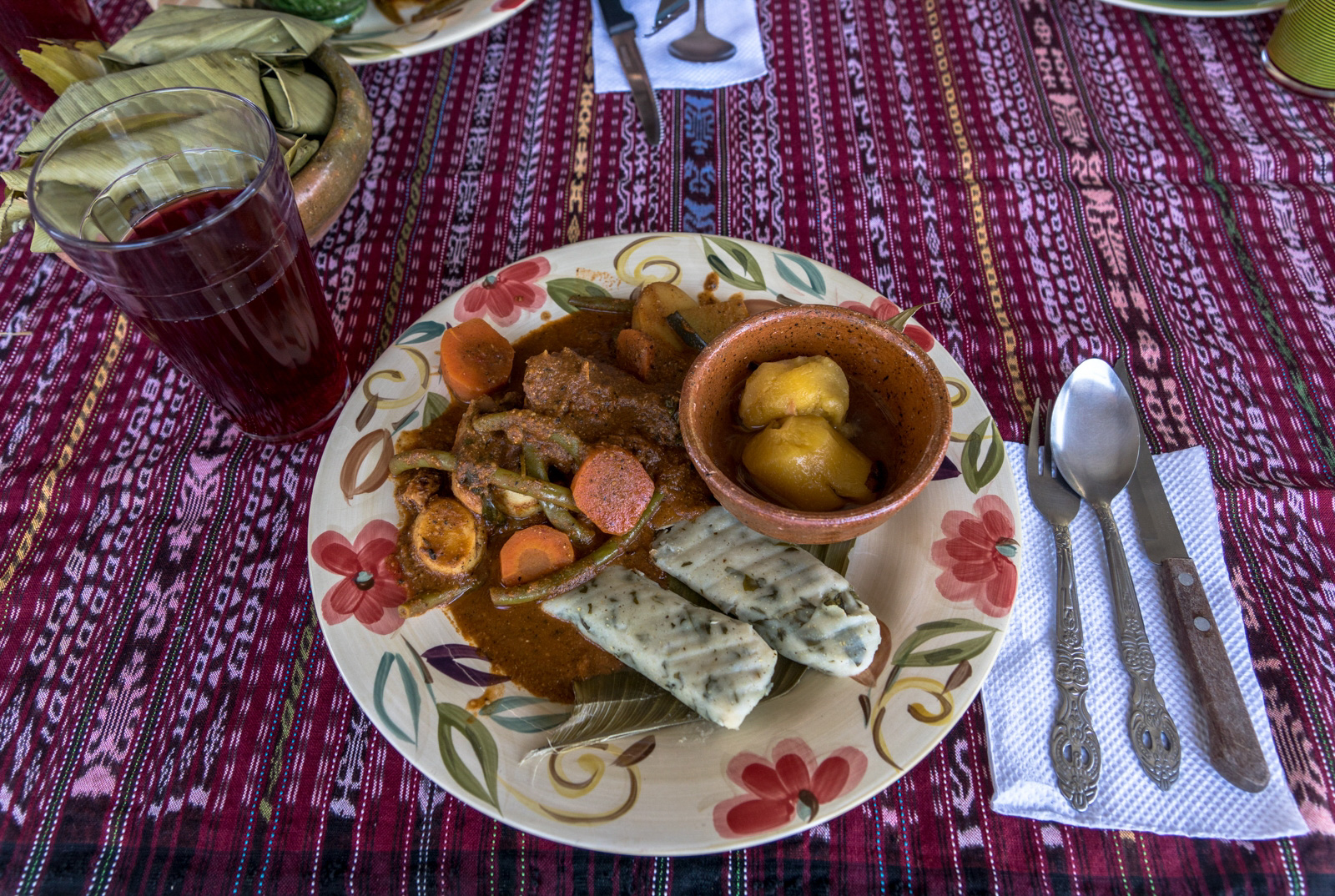 The thing about Lago Atitlan is that it kind of sucks you in. It’s a place that people come for days and end up staying for weeks or even months…especially the hippie fire jugglers, man they’re hilarious. It’s just that beautiful! Despite Justin’s family leaving the Guys decided to stay a few more days, and ended up camping up on the cliffs, hanging out with other overlanders, and devising a plan for the coming days and the border crossing to El Salvador!