So we’ve decided to change things up a bit and instead of writing a meandering posts regarding the stupid shit that happens to us along the way we’re going to get a little more specific and focus solely on the Volcanos of Guatemala. Believe it or not, there are 27 (mas o menos) volcanoes in ol Guate – enough to keep you busy for a while. Two out of three climbs we chose strictly out of convenience, the other (Acatenango) came HIGHLY recommended! All-in-all we climbed over 1000 floors and took over 100,000 steps (at least that’s what the iPhone said). 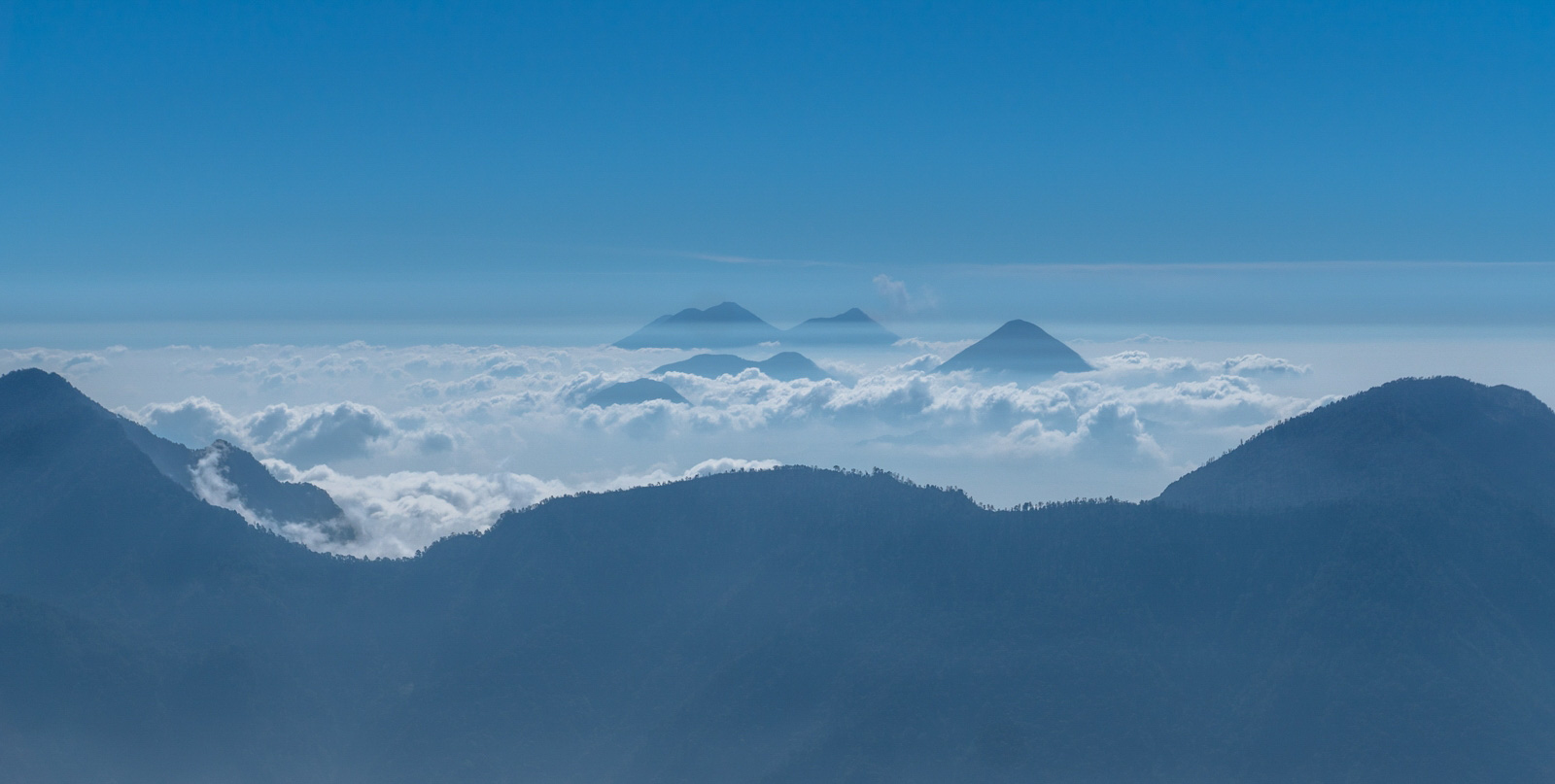 Since we’re skipping a head a bit here’s a quick prelude. After one week of studying Spanish in Xela (stories to come), the Team was DYING to get out of the City to get some fresh air – there’s no such thing as “emission testing” in Guatemala, and the old chicken buses belch out noxious fumes all day long. The plan was set to climb Volcano Santa Maria that first Saturday, HOWEVER, Mitch caught another case of El Gripe aka he was either in his bed with a fever/chills or sitting on a toilet somewhere (told you there was some good deets coming). After a couple days feeling terrible it was finally time to sack up and hit the trail.

Santa Maria, oh Santa Maria – first thing we had to do was to try and figure out how to get to the trailhead. We read a couple blogs and it seemed easy enough…grab the 5am bus from the Church (1 of 14 in Xela) and it will take you straight to Llano de Pinal. Since we decided to go on Sunday the first bus wasn’t until 730. Good thing we double checked this before we got out of bed at 4:15 AM – NOT! We got to the bus stop and if it wasn’t for a nice old gentleman passerby we would have been sitting there for the next couple hours. Thankfully we were able to find a taxi driver in the town square that was willing to give us a ride. He tried to jack up the price but then made the mistake of telling us the “normal price” first (75Q). After some debate he wouldn’t go for 75Q but was ok with 25Q/person (there were 3 of us). No one ever said the people of Guatemala are highly educated in the ancient art of mathematics. 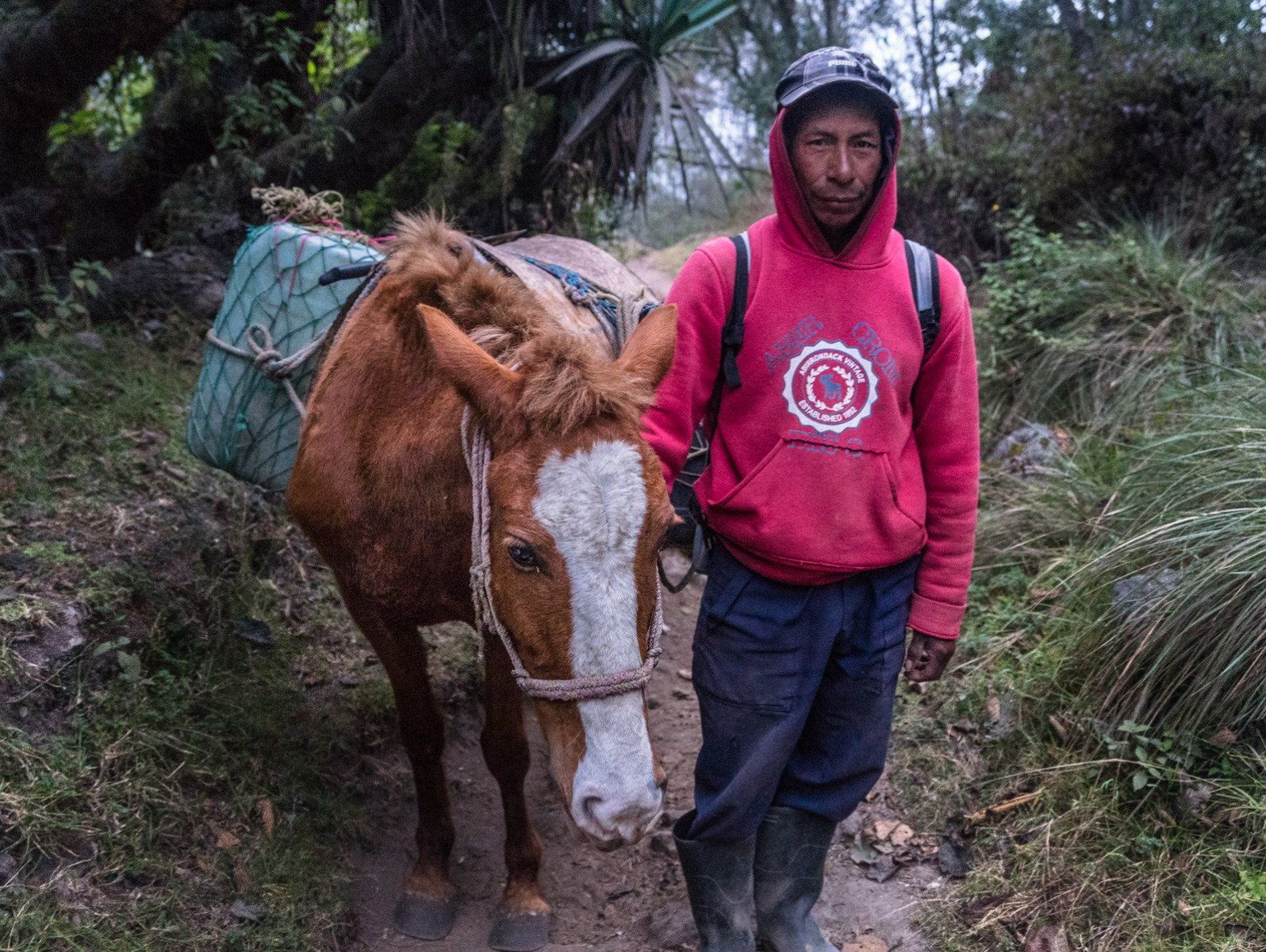 Anyway, we made it up the shitty dirt road to the trailhead without his car bottoming out and started the ascent before 6 AM! Up, up, straight FUCKING UP!! We met a nice farmer, Juan, and his horse Camaron (aka Shrimp). We asked him about his life in Guatemala and if he had any available daughters. You know, the usual. He was very handy to our hike as he helped navigate us through the maze of trails in his fields. Still going up, and up, and up, we crossed paths with some locals. One 70 year-old lady was in traditional dress (which half of the country wears) and plastic high heels. Either she was bat shit crazy or one bad ass old lady (odds are the latter). 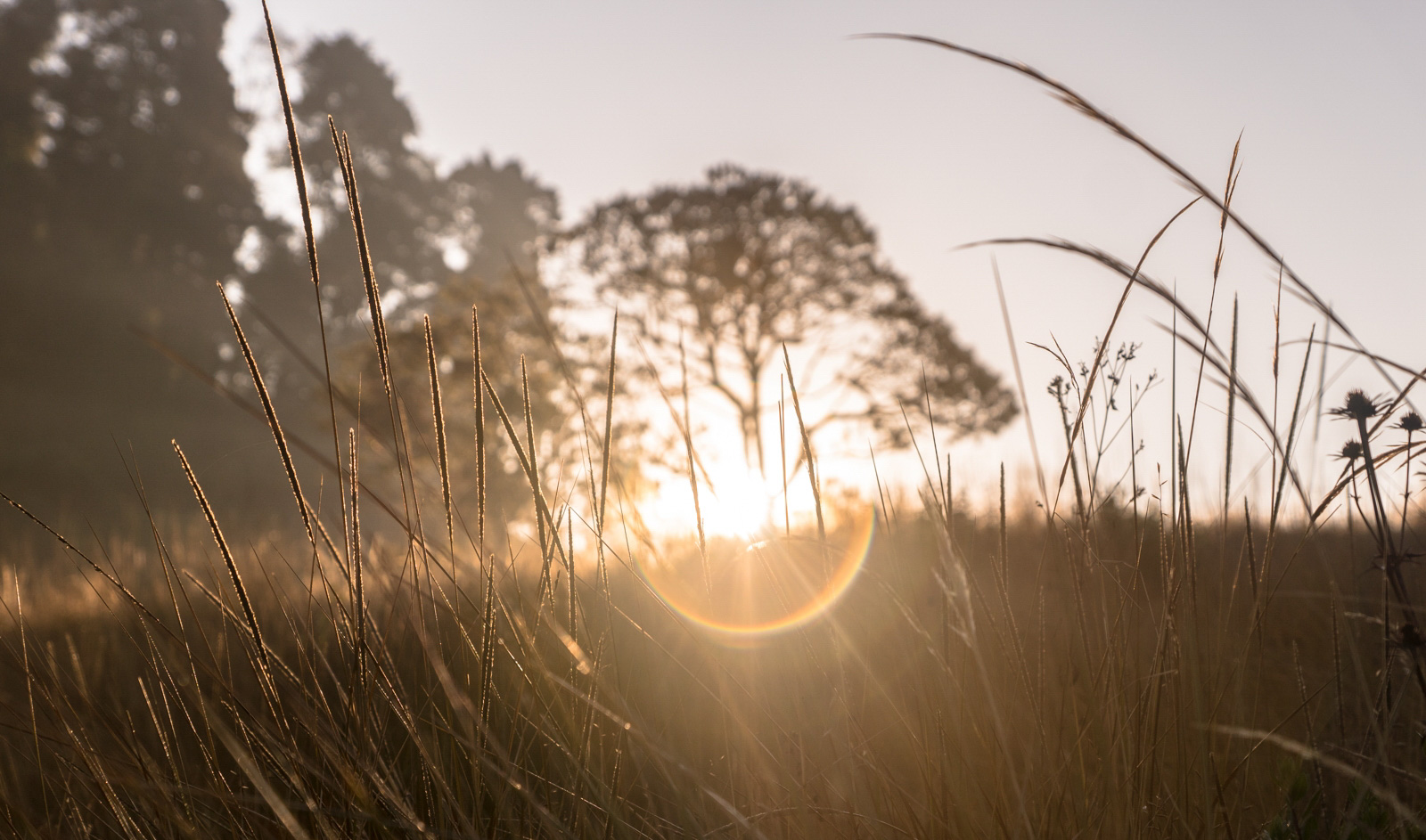 There was one problem with the hike, there was trash FUCKING everywhere. None of us had seen anything quite like it. Guatemala is a dirty place, but this was despicable. Justin claims it rivaled with what he saw in parts of India. When we reached the summit, it didn’t get better. The Team was hurt…and shocked…and offended! There were 30-40 people at the top for a sunrise church session but apparently trash removal or littering wasn’t part of their sermon – Putos. There were piles upon piles of trash, left over lunches, empty 2 litre bottles, etc. At one point Antonia got so mad and upset (and hurt) she started talking to the leaders of each of the groups and insisted that they take responsibility for their shit. It was mildly successful! We got our fair share of head turns, but also convinced a few to pack it out. We even found our own 5 gallon bag and filled it to the brim! 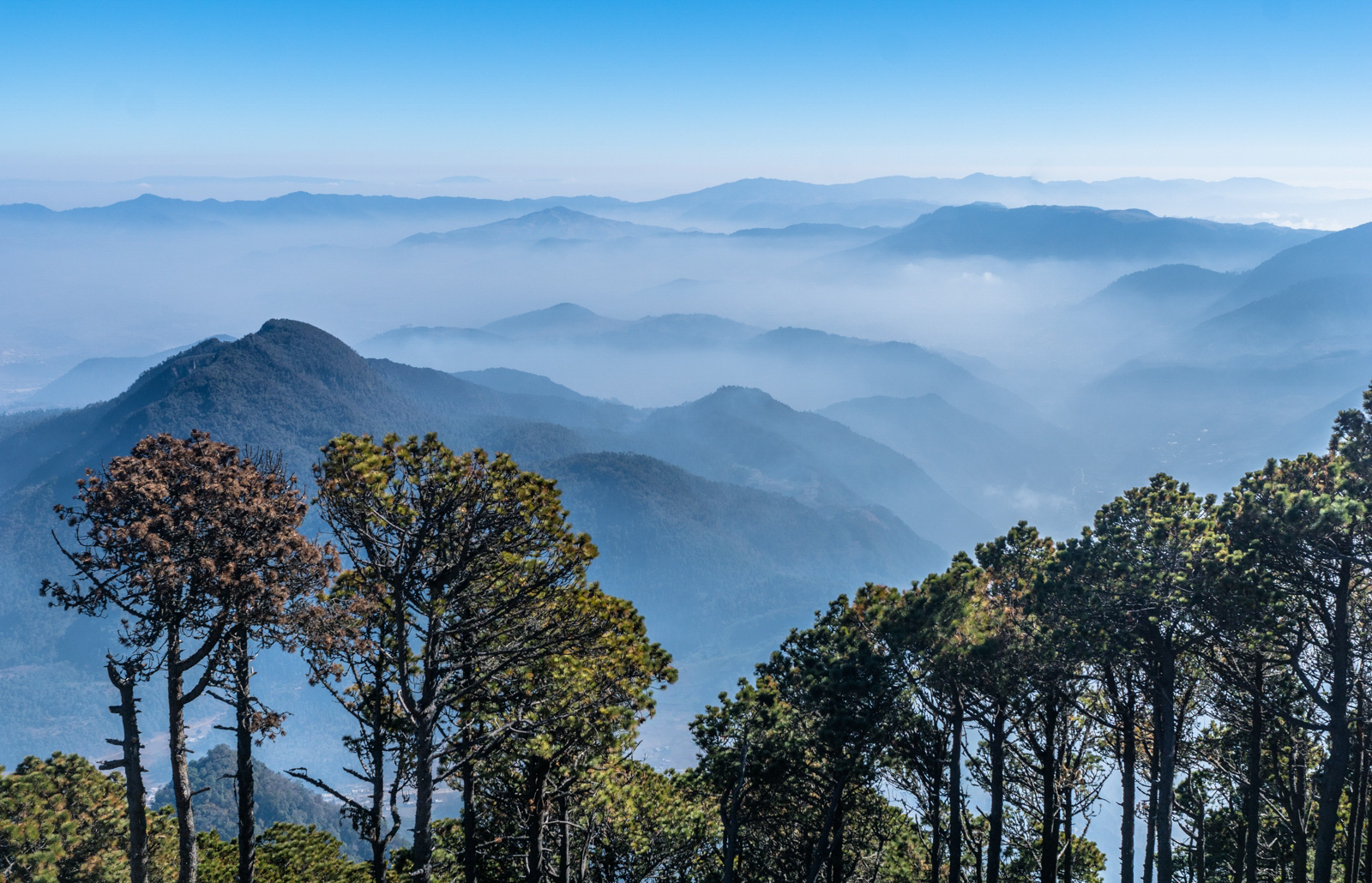 Despite all of it the hike was still incredible. We had spectacular views of Volcano Antigua, Volcano Acatenango and Ol’ Fuego (our next hike).

Since we crossed the border from Belize everyone we ran into had told us about their hiking experience up Volcano Acatenango. “It’s fucking brutal! HARDEST THING I’VE EVER DONE IN MY LIFE!” Along with these disastrous thoughts, we also heard, “The stars were unreal! We watched the volcano erupt for hours! One of the most amazing things I’ve witnessed in my life!”. With that Yin and Yang of emotions how could we say no? The timing was perfect. We had a small window between Spanish school and Justin’s parents visiting. Plus Mitch’s buddy Rick was in town for a few days. LET’S DO THIS! 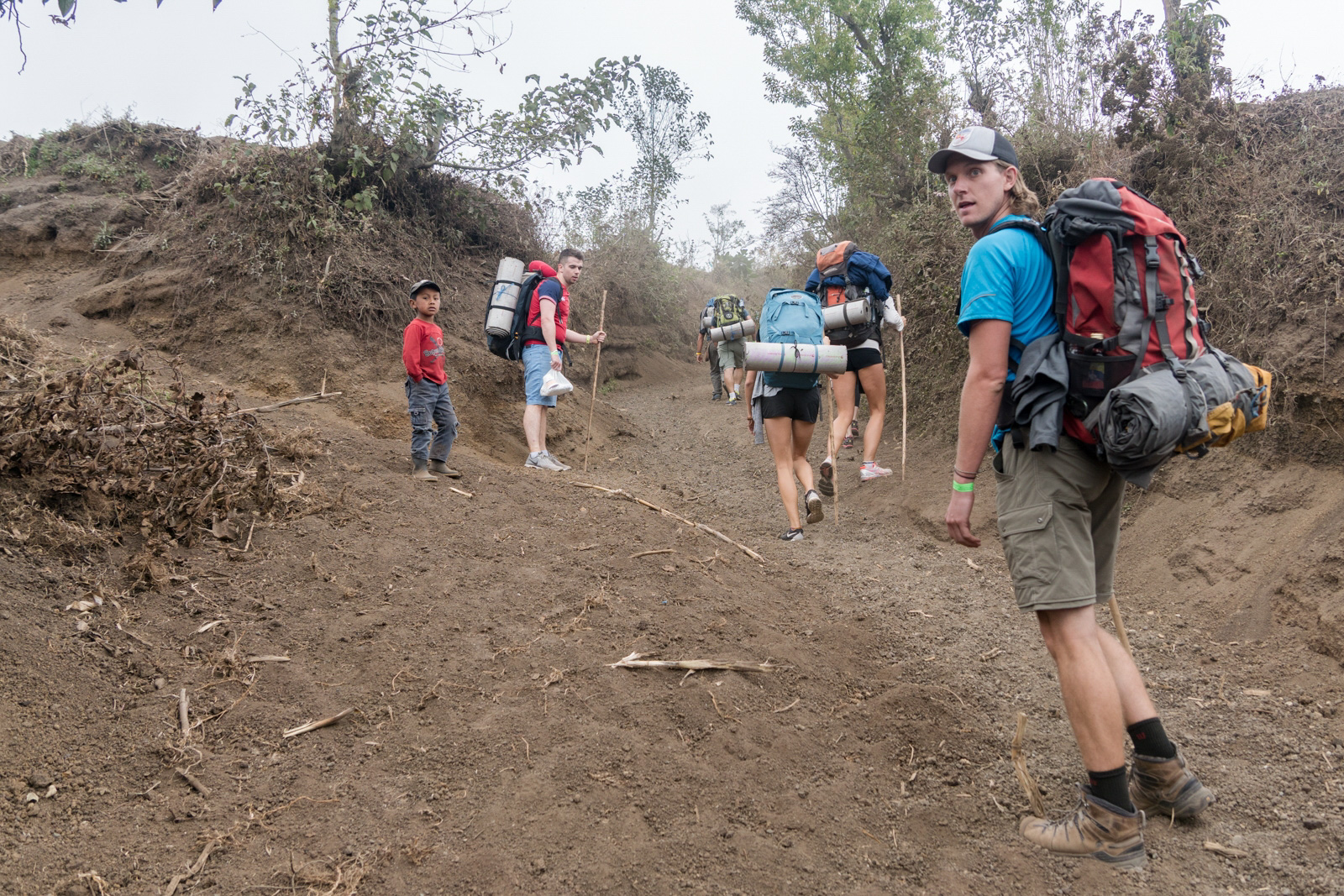 Could you do the hike solo? Yes. Would we recommend it? Fuck no. The tour was only $22 and included meals, transportation, and camping gear – it was a no brainer. We were booked and ready to head off, but first the waiting game. We were picked up 30 minutes late and then spent the next 2 hours driving circles around the City of Antigua. Why the FUCK couldn’t we all just meet in the town square?! Nobody said Guatemalans were the smartest…With everyone FINALLY loaded, we stopped for food and gear putting us at the trail head a little after noon. 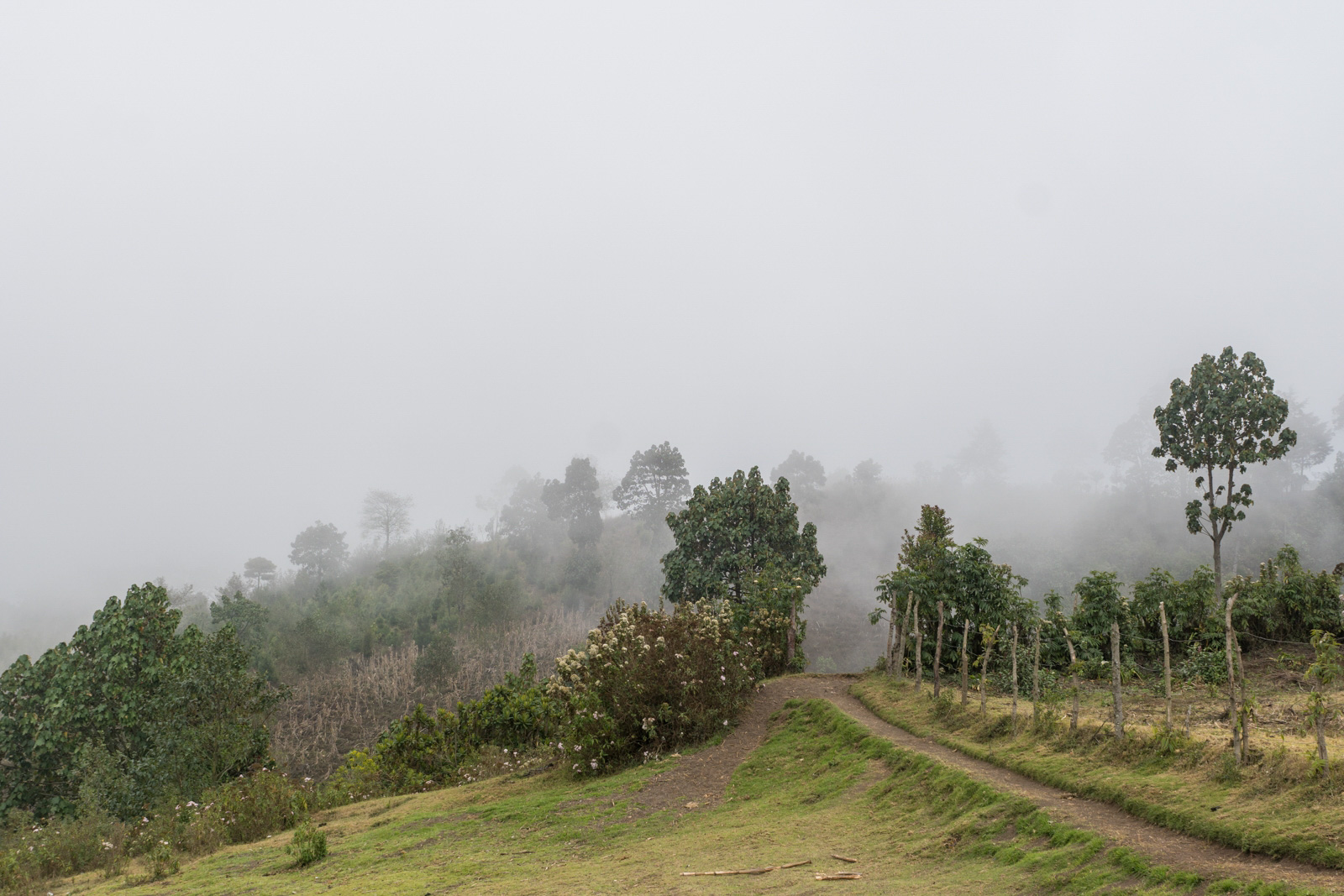 The hike had a similar vertical change as Volcano Santa Maria of about 5,100 ft or in other words straight FUCKING UP! There is really no other way around it – it’s a volcano. There was no zig-zagging or switchbacks…only up! But what made this hike difficult was the dirt, sand, and ash we had to trudge through. The beginning and the end of the hike was a consistent gravel pit, if you took a step forward and didn’t slide back half a foot you were lucky. With perseverance, bean sandwiches, and plenty of breaks we finally made it to the campsite after 5.5 hours of hiking just in time for sunset. Unfortunately, we were greeted by clouds as far as the eye can see and eventually rain. We could hear the thundering explosion of Volcano Fuego, but we only saw life in a monochrome grey, so off to bed we went. 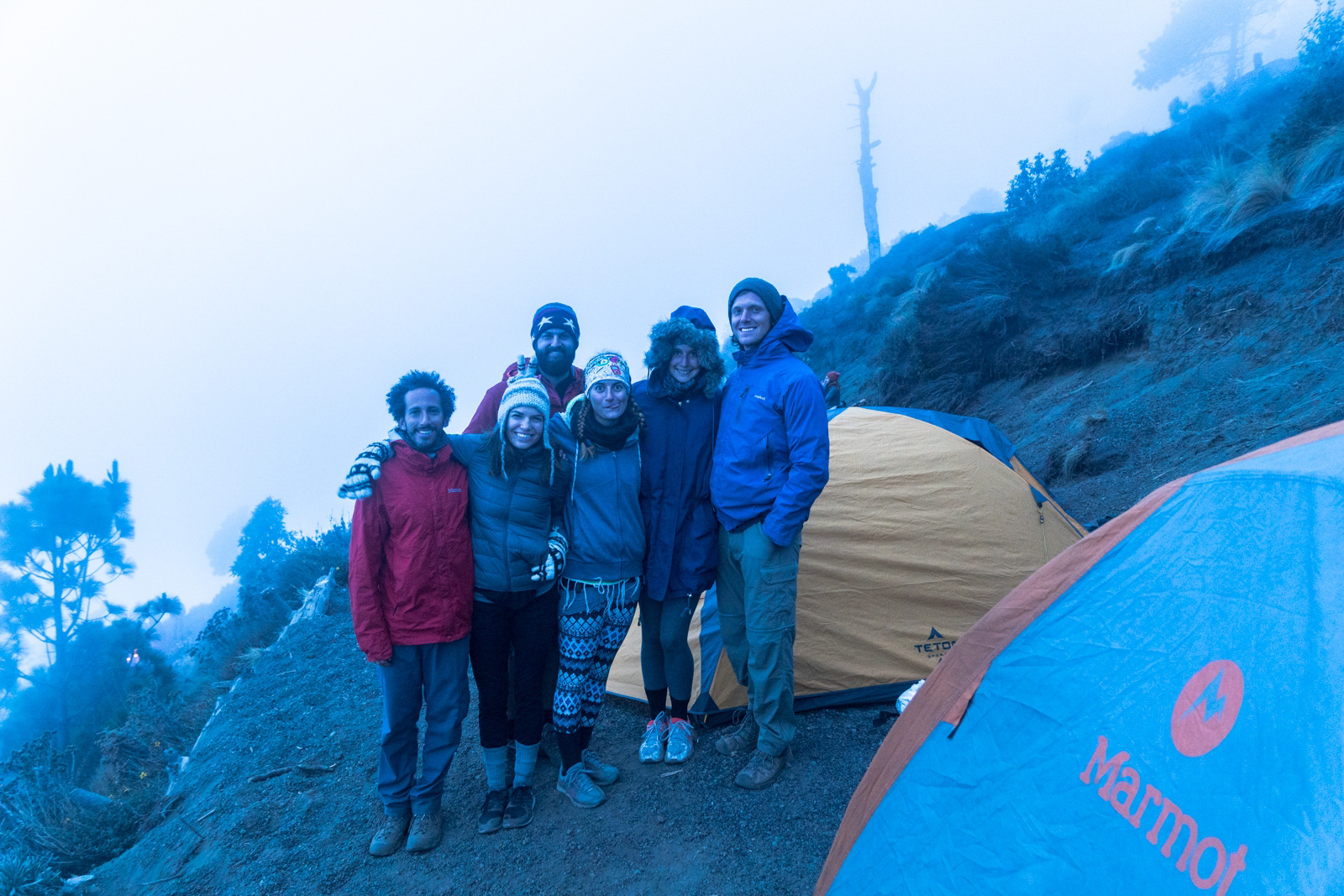 It was almost 1 AM, when we were all abruptly awoken by Antonia and Eva. “Wake the FUCK UP BOYS”, throwing shoes in our faces. Volcano Fuego was literally exploding! It was incredible to see. We sat there in complete awe! 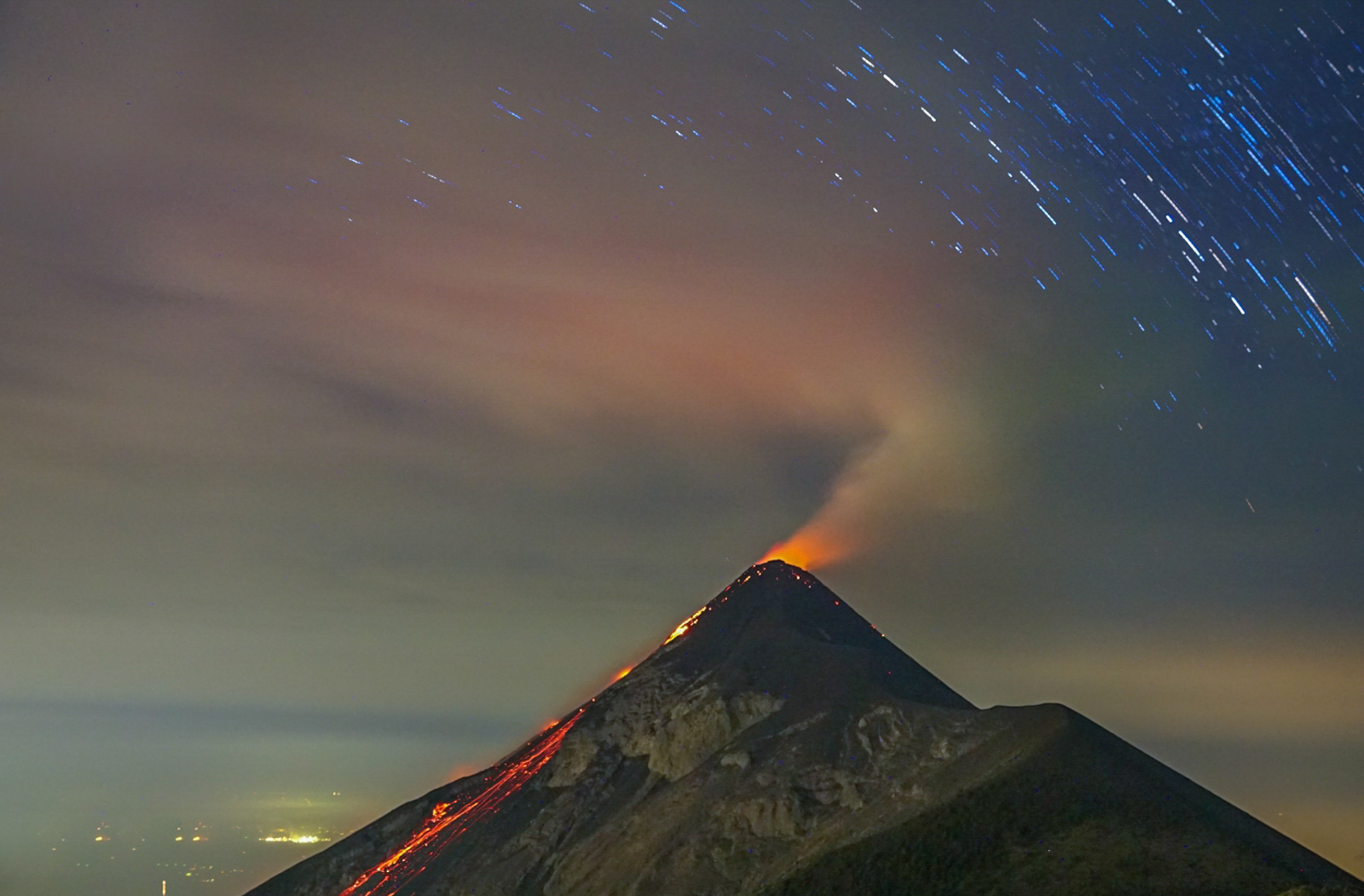 With a few hours of sleep our entire group was back up at 4 AM ready to summit Volcano Acatenango. It was a 1.5 hour steep summit in shin deep volcanic gravel, but watching the sunrise over Volcano Antigua and Fuego was absolutely beautiful. 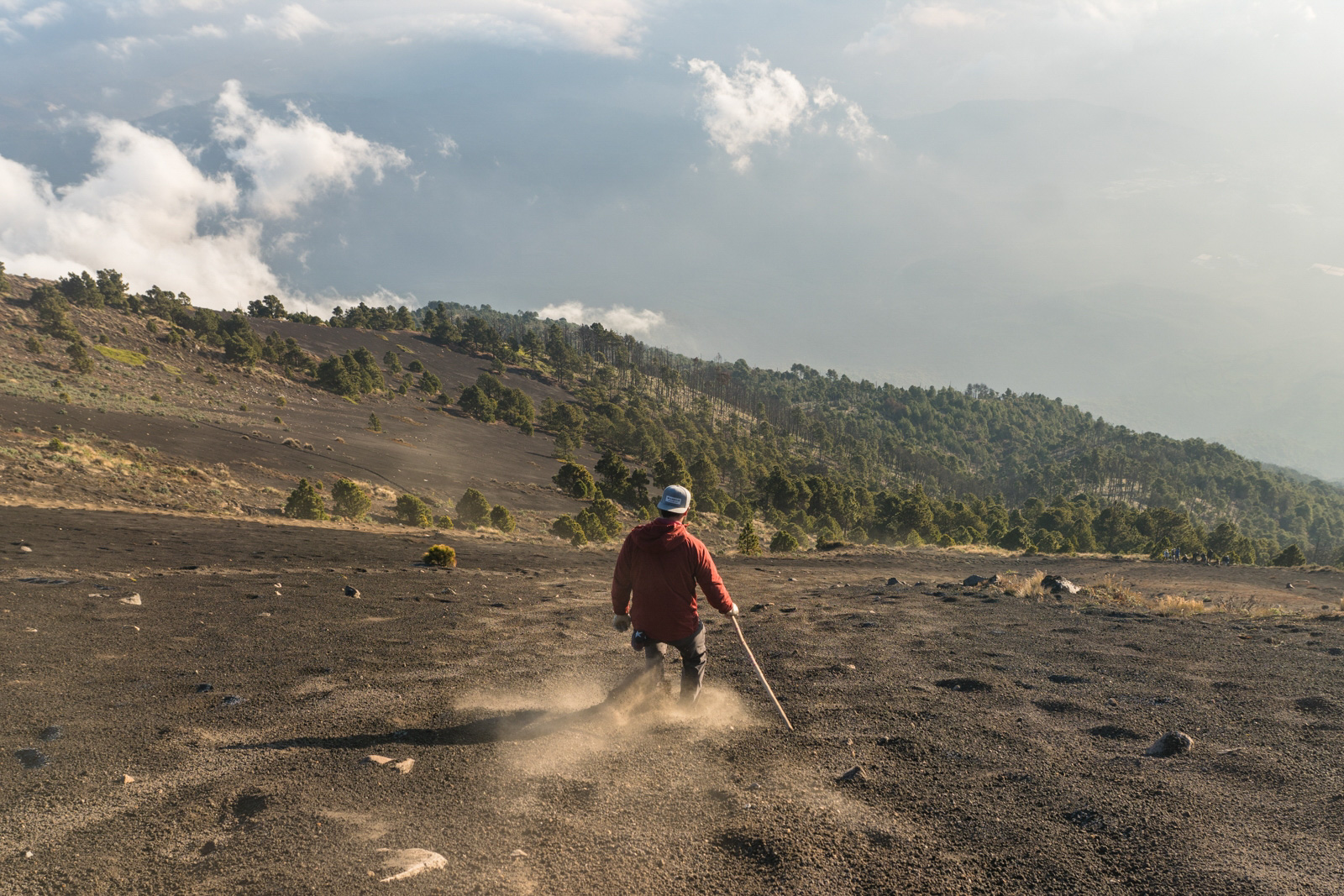 Our last and final volcano hike in Guatemala was Volcano San Pedro. We had spent the greater part of a week sleeping directly across the lake from it while staying in San Marcos with Justin’s parents. It looked mildly tame and timid in comparison to our first two hikes. We even convinced, Andy and Laura, who were also overlanding south to join us. 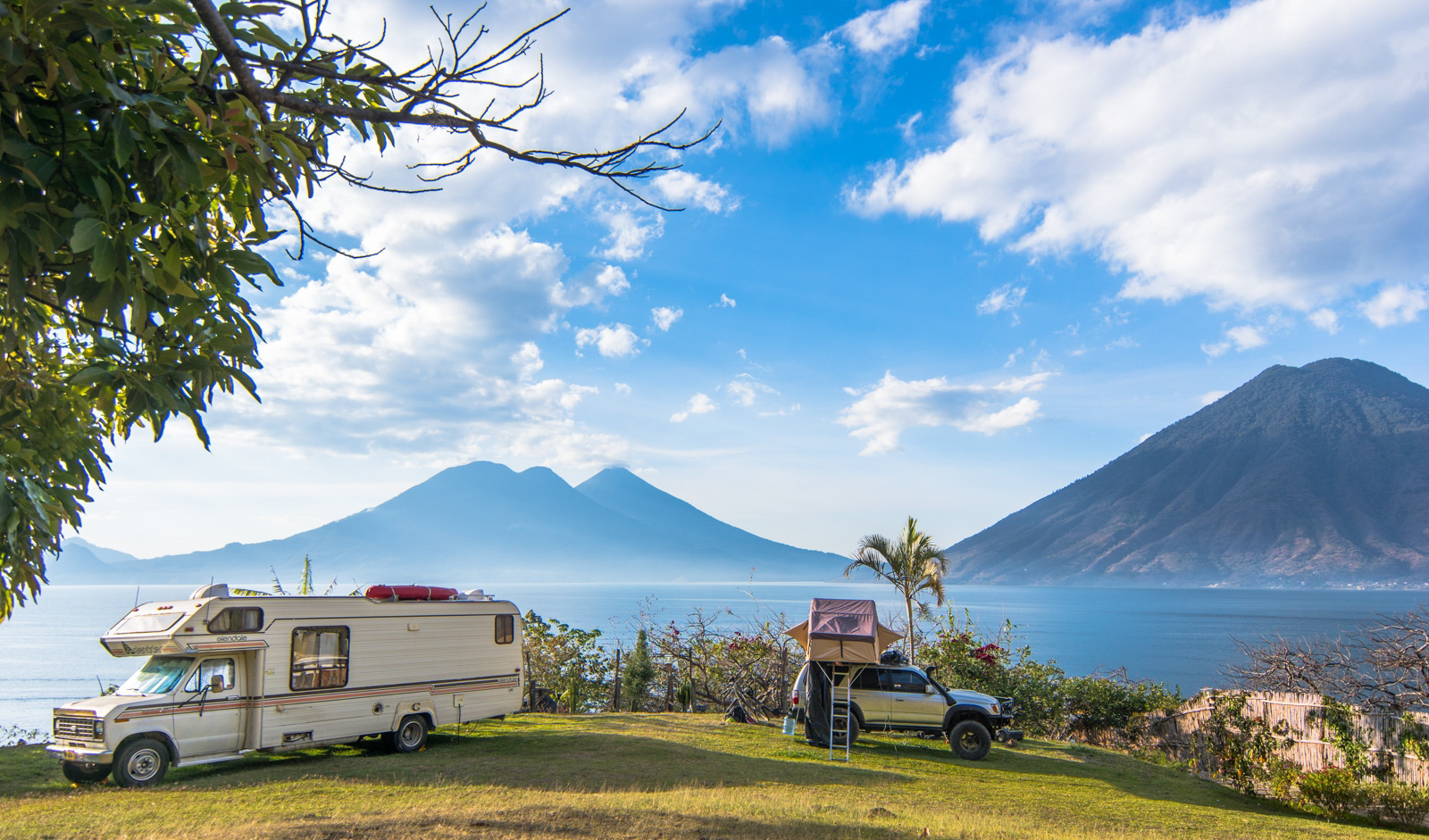 Catching a pickup to the trailhead we all road in the back like traditional Guatemalans, machetes and shotuns included. The hike itself felt easy after our previous accomplishments. The scenery was thick forest, and the best part about the hike was the tire swing that provided a full panorama of Lago Atitlan and the massive vista of the lake and all its towns from the summit.

With three volcanoes completed it was time to move further south and closer towards the El Salvadorean border.