The infamous Deluge Lake hike. A simple 9.1 mile hike staring in East Vail, Colorado. Despite being steep and easily accomplished in a day, up until this attempt I had been 0-2 on this trail. The first two times that I attempted this trail was in the winter, and both times resulted in failure. Thick snow, post-holing deep down to me knees, and relatively short days of sunlight meant neither time I’d had even made it past the aspen grove. This time was going to be different. It was September, the first snowfall had just arrived, the aspens were painting the valley an array of yellows and oranges, and I was determined to make it. Not only was I going to make it, but I was going to attempt my first “semi-winter” camping.

For this attempt at Deluge Lake the crew was to be the usual, Nate and I. Not only was this to be an attempt at Deluge Lake and possibly one of the many stunning peaks looming above in the Gore Range, it was going to be a solid test of some new purchases and gear for Nate’s big trip to South America. Up on the chopping block was new boots, a parka,  base layers, gloves, and some new cooking recipes. Having both been out of town for most of September we were afraid we’d have missed most of the aspens…we were wrong. 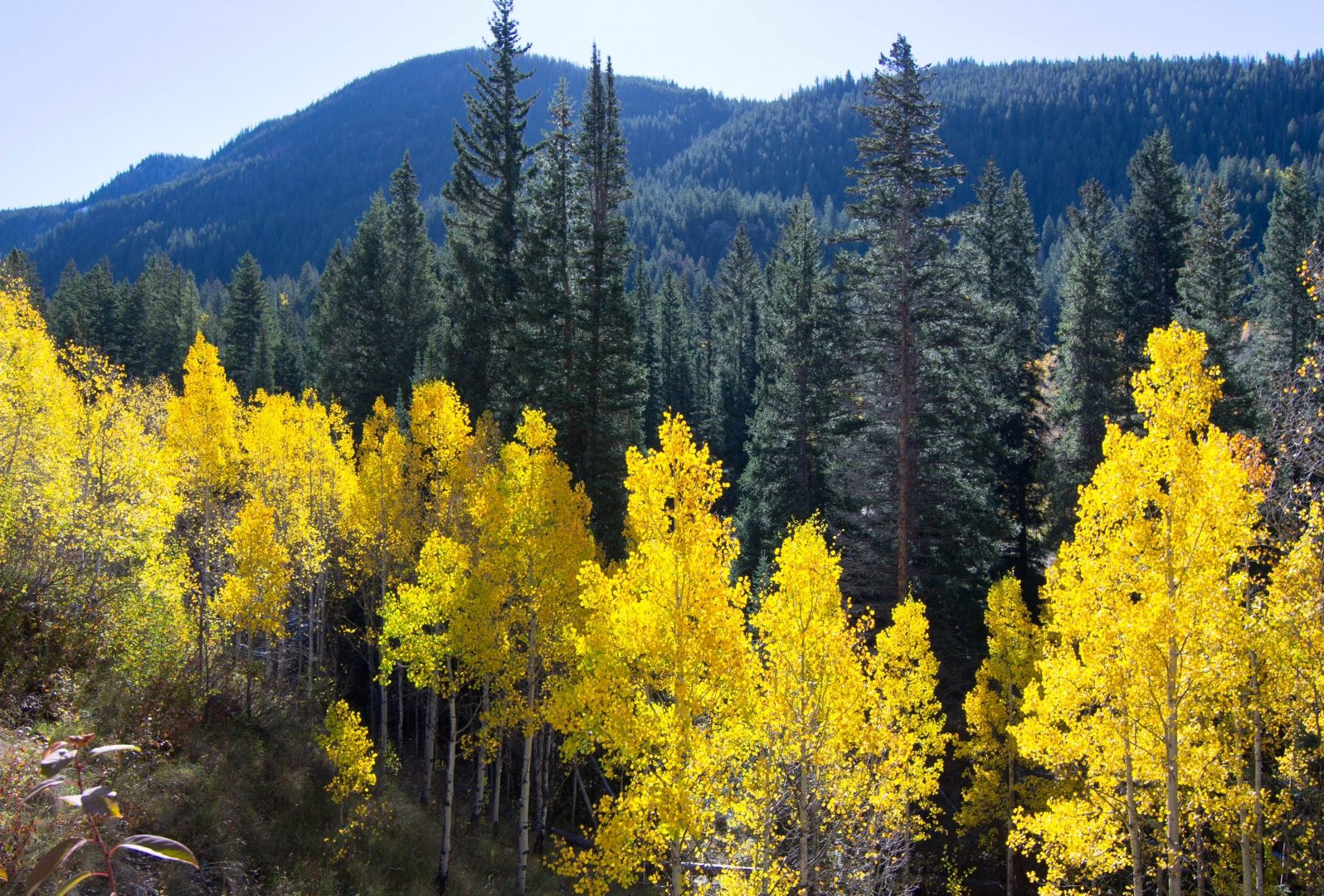 We arrived in East Vail a little after sunrise to a splendid array of colors. It was magical. Most don’t seem to take advantage of it, but coming from Florida it still amazes me. We quickly loaded the gear and began the hike which leads up to the Deluge Lake – Gore Creek Trail split. To the left Deluge Lake, to the right Gore Creek. While the hike isn’t the longest it is quite steep, and it starts off quickly. We rose quickly through dense aspens, which were at their peak. The trail was littered with gold pedals of fallen aspen leaves, and with each switchback the view got better and better. 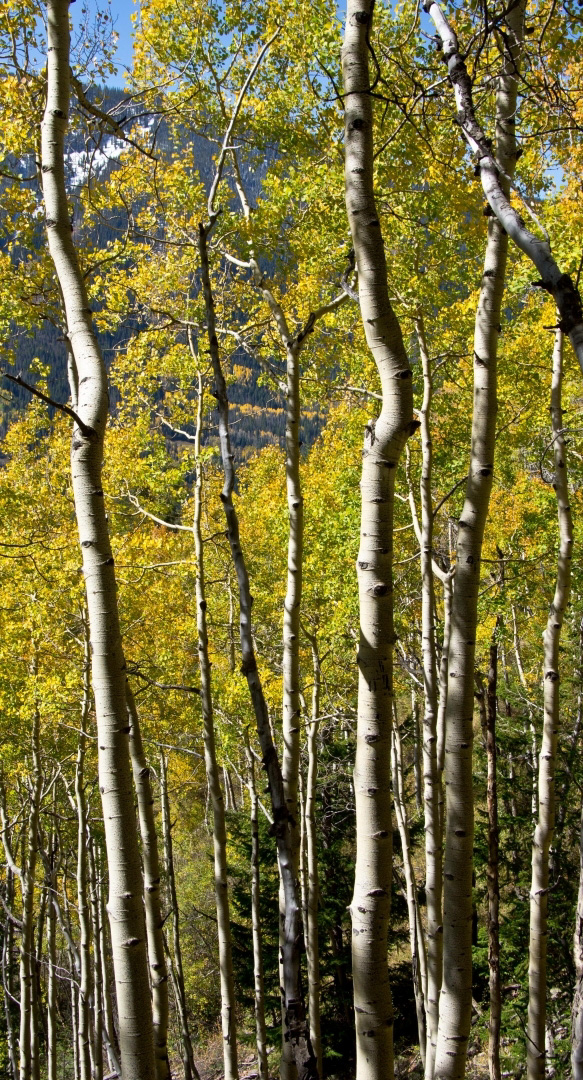 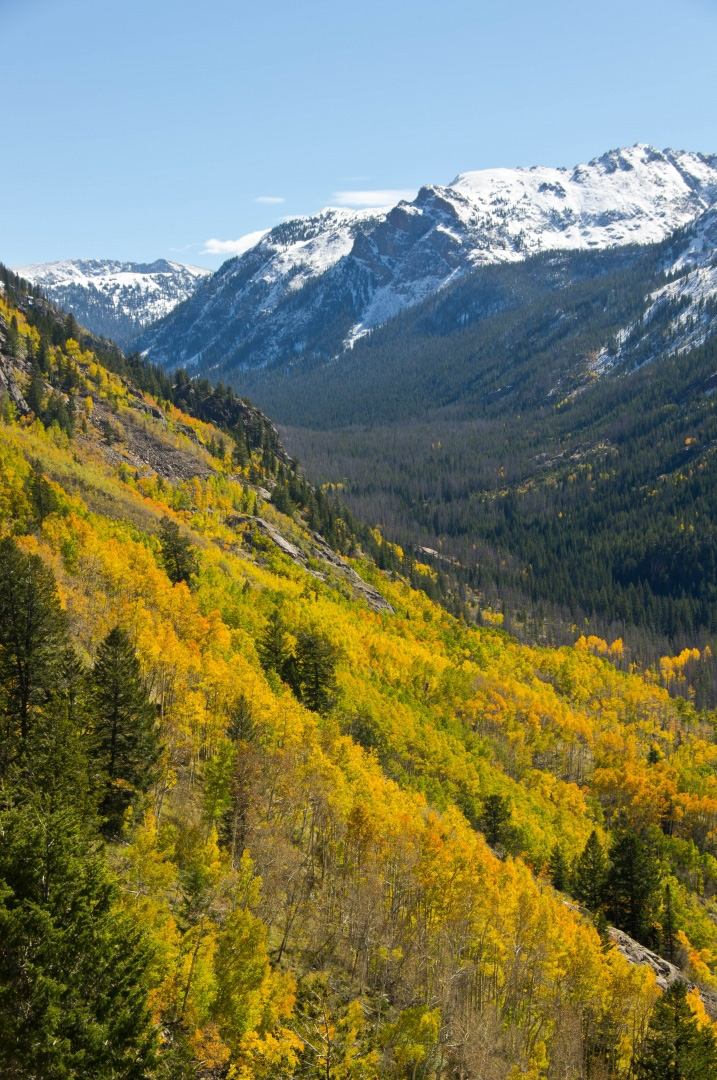 A fresh 4-6 inches of snow and blue bird skies made for an amazing contrast of colors. From the get go we quickly got one piece of the gear review out of the way, and in a bad way. Before we even reached the crest of the aspen grove, which is the steepest part rising approx. 1,300 feet in a little over a mile, Nate’s heals had looked like someone had carved chunks out of them. He did his best to bandage them up and we resumed on.

From the aspen grove we entered into the sub-alpine, where we encountered our first snow of the season. It wasn’t much, but enough to make for a slippery mess and cautious footing. Having both been at sea-level for the greater part of three weeks our lungs were both burning, but we trudged onward. We passed a few folks here and there, but nothing too crazy. As we increased in altitude the snow got deeper and somehow we had come of course from the standard trail, which was good logistics practice. Utilizes the compass, map, and electronic topo maps on Nate’s phone we found our bearing and were back on course. We continued through the sub-alpine until we could go no further. We had reached a river crossing, and on the other side a almost treeless high alpine valley coated with a fresh dusting from a few nights prior. Rising above the valley was the Gore Range in all it’s glory: Grand Traverse Peak and Snow Peak were looking stunning. 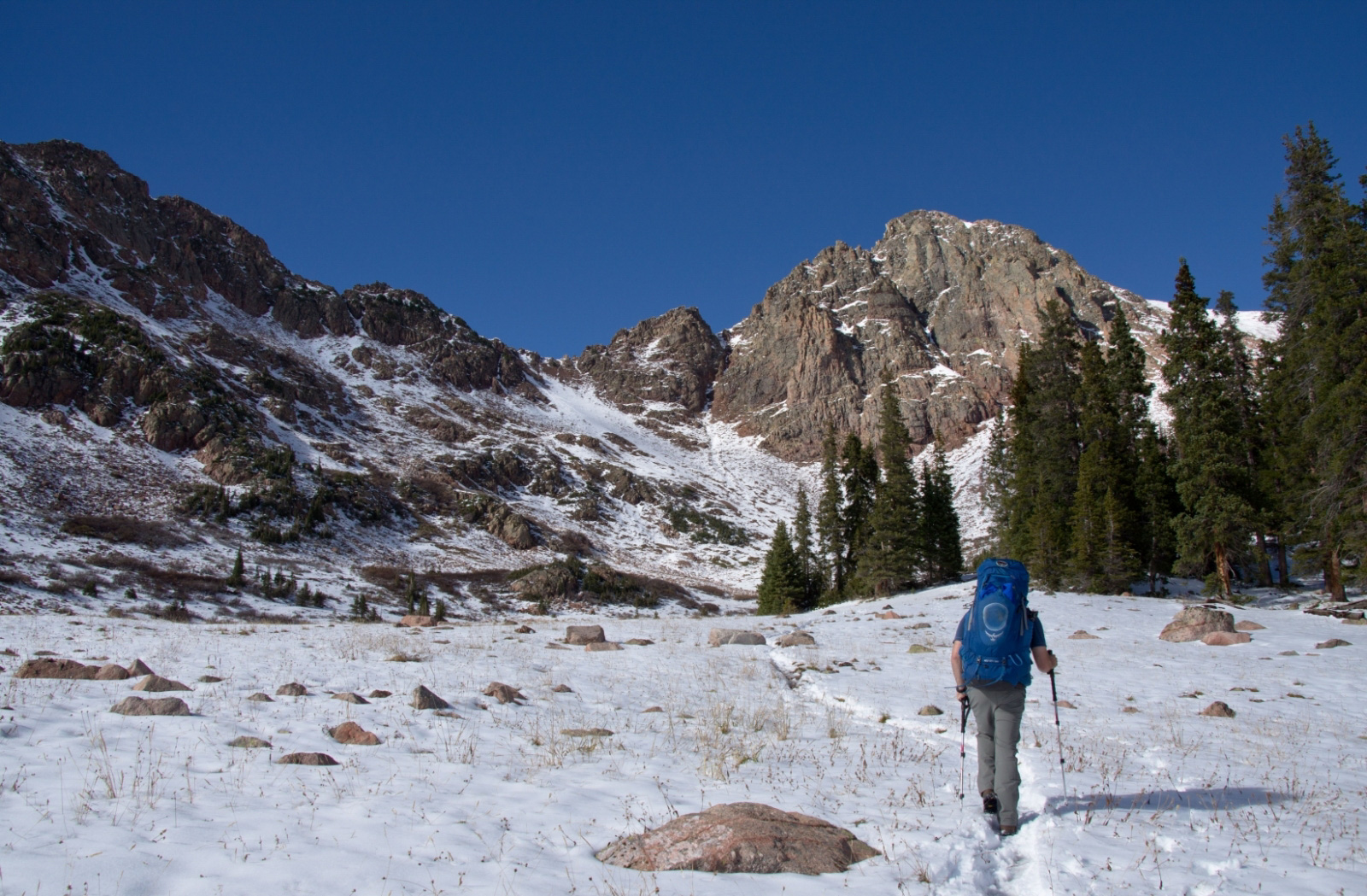 Up until this point our plan had been to test out the winter tent for the first time. That was until we spoke with some fellow hikers who were on their way down from Snow Peak. We had read no information on this prior, but our fellow hikers informed us there was a hut around Deluge Lake. We continued up the trail until we reached Deluge Lake. It was much smaller than I had anticipated, but stunning none the less. The views were unmatched. For a 180 degrees, the Gore Range dominated our view rising straight up from the shores of the lake. We took a pack and water break and began searching for the hut, which was easily found. Neither one of us could figure out how exactly the hut got there or why it was there, but it was in immaculate shape and was quite picturesque. 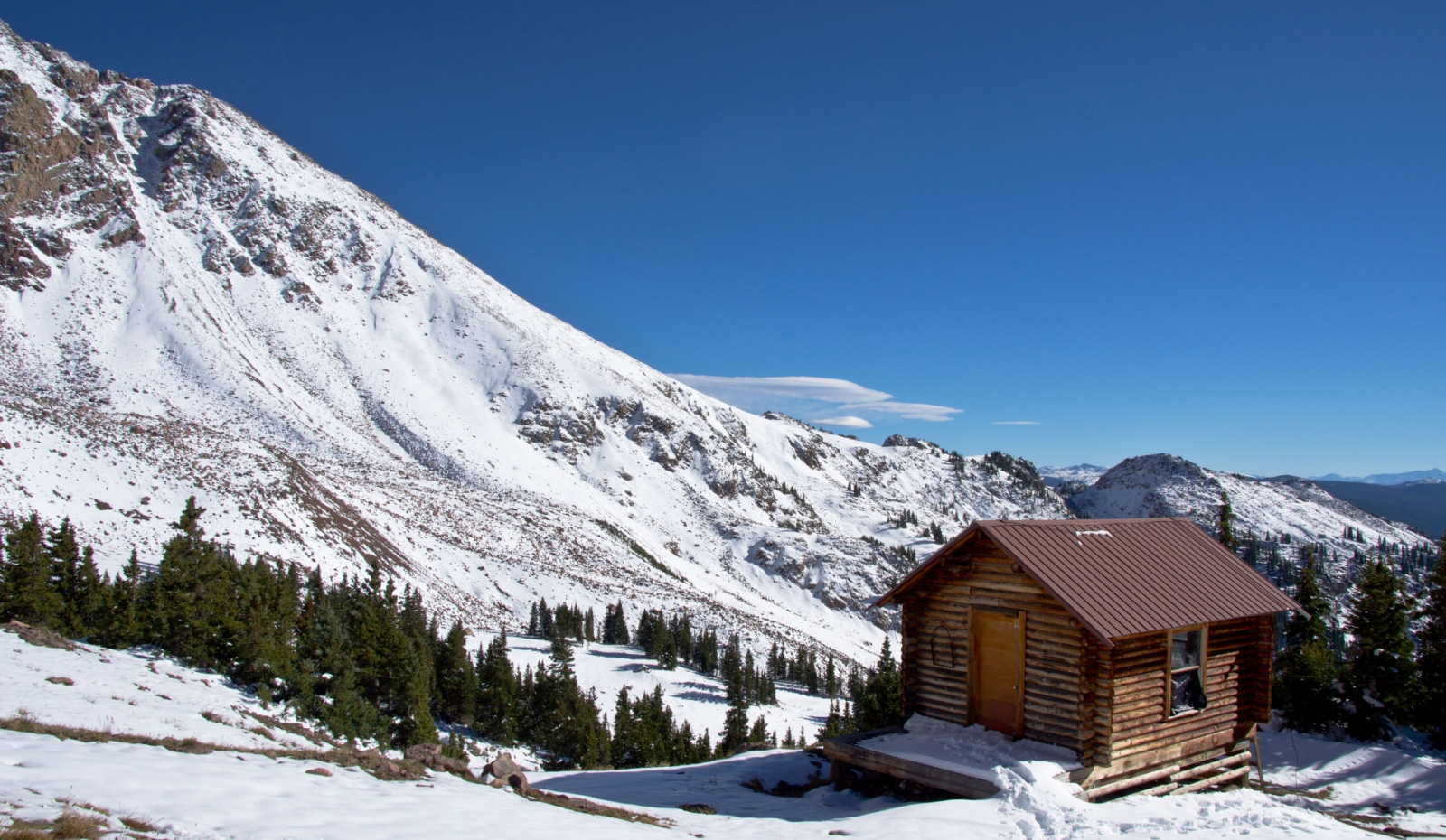 After shoveling the snow off the front porch, we made our way inside to find a lovely empty cabin except for a few tools, a small child’s table, chair, and a box of gear. It seemed like someone had spent some significant time up there. We debated whether to stick to the original plan of sleeping in the tent or in our new found home. Having never spent a night in a hut the option was simple. Why sleep outside in the upper 20s when we can sleep inside? We swept the floor and made camp. We had set up camp and began getting the camera gear ready for the evening when we heard foot steps. It was a solo girl from Vail arriving in a pair of shorts and soaking wet socks. We invited her in for the night and it was good company. We all spent the evening sharing stories and eating. The alpine glow was some of the best I’ve seen. For 6 months, I would watch the alpine glow from Vail set over the Gore Range on my walk home from work, and it had been a goal of mine to actually see it up close and personal. When that time came I was speechless. From Orange, to red, to pink. The full spectrum of colors. If that wasn’t enough the almost full moon reflecting off the snow at 11,975 feet with breathless. It was 10pm, yet the entire valley was lit up like daylight. Normally I would at least attempt to photograph it, but I knew it would do no justice. I sat back and enjoyed the view. 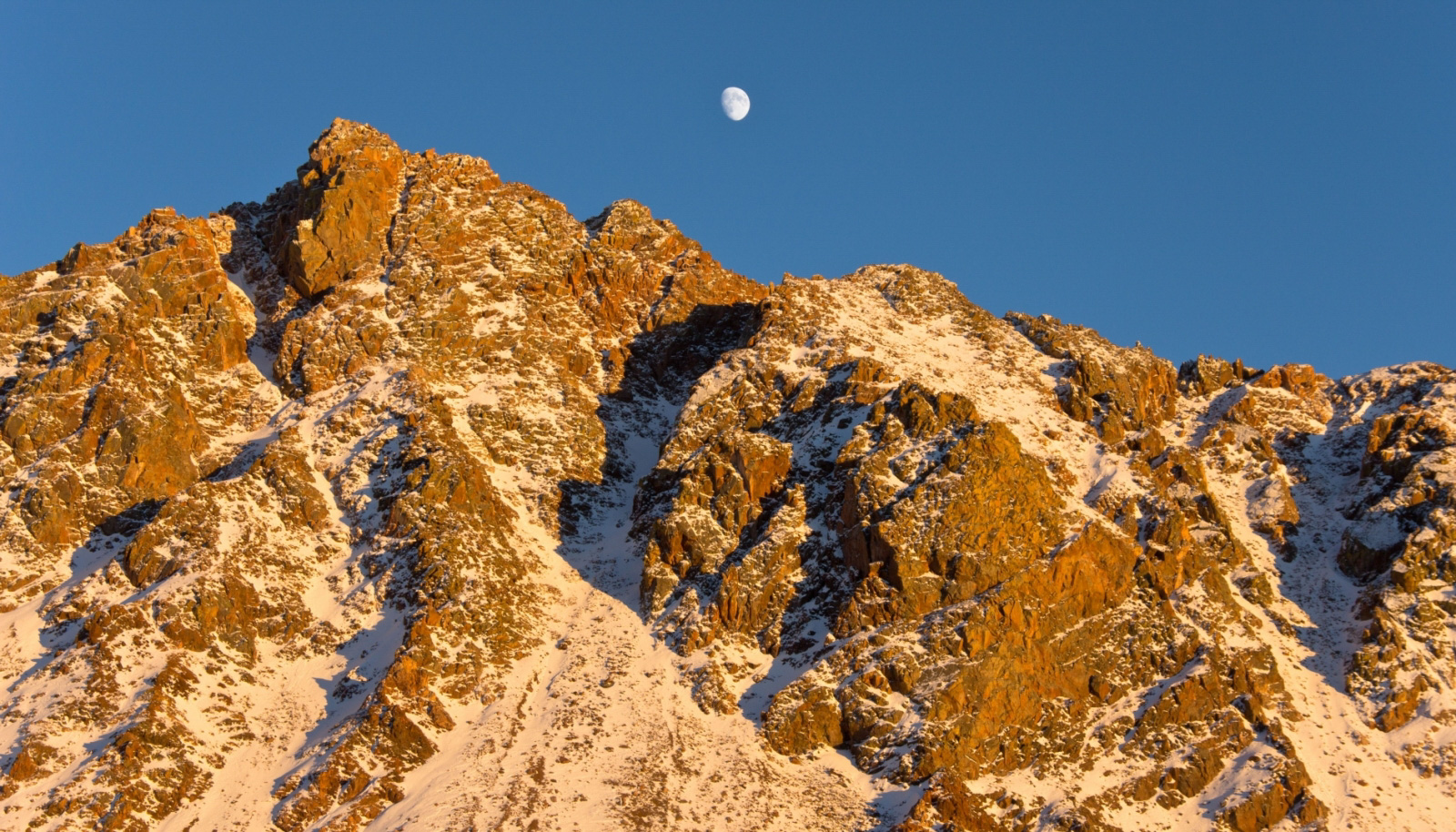 The next morning we wondered around the valley enjoying the scenery and admiring the lake before heading on down. The hike up was steep and breathless, but the hike down for me was excruciating. My knee was aching and in pain. It was a brutal hike down, but I was glad to finally be 1 for 3.