Returning from two weeks in the States Mitch was eager to hit the road and get into the depths of Colombia. He was missing the vibrant culture, food, and of course El Tractor (and Antonia, of course!). We had plans to head north retracing some of Justin’s footsteps before heading further up coast towards Punta Gallinas, the northern most point in South America. The horror stories of the man eating sand fleas and the unbearable heat Justin endured must have not sounded enticing and Mitch’s mind was quickly changed. We decided we needed to retreat down to the mountains near Bucaramanga and San Gil, where it would be cooler, and we wouldn’t need three showers a day. We would follow the Rio Magdalena south stopping in Santa Cruz de Mompox before ascending into the mountains. It was game time!

Before we could depart Cartagena, and officially dive into South America, we had a few maintenance items to take care of. We’ve both been running the same tires since we left Denver, some 12,000 miles ago, and our chain and sprocket setup was even older! It was time to treat the girls to some well-deserved maintenance. The guys over at Moto Gangas were a great crew and got us all setup, and had the best selection of motorcycle tires and parts we found in Cartagena. 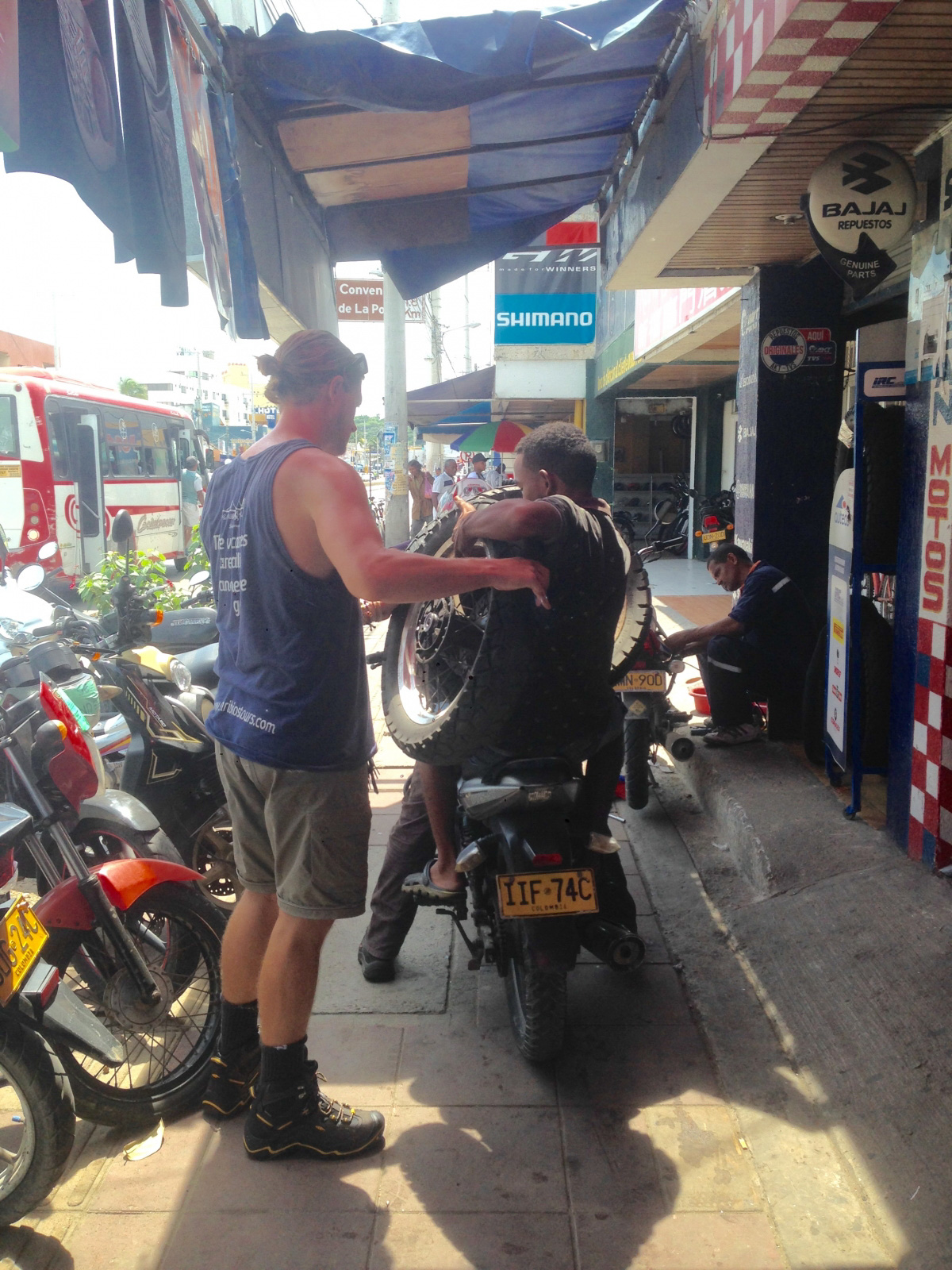 With everything installed we headed out early the following morning towards Santa Cruz de Mompox, but didn’t make it that far before Justin’s bike began to feel wobbly and unstable. “What the fuck?”. “Bro your tire is flat as shit!”, Mitch yelled as he crept up behind Justin. It had finally happened, we got our first flat of the trip! How could this of happened, these new tires had less than 30 miles on them? Luckily for us we were only 3 KM from a llantera (tire shop).

Baking in the Colombian heat, Justin immediately pulled off the rear wheel and went in search of a ride, leaving Mitch to watch the bikes, and our gear thrown across the road. The police denied him a ride, but quickly found him a mototaxi. The culprit was a pinch when the tire was installed, and it was an easy fix for 5000 Peso or less than $2. The problem was between the two of us we had less than 7000 Peso. We had tried two ATMs in route, both leaving us empty handed. Justin tried to offer the guy $5 USD, which was more than double what he wanted but he refused it. Where would he change it? He lived in the middle of nowhere, or at least that was his argument. It was all we had and it was eventually settled. The llantero would receive his 5000 Peso, the mototaxi driver would receive the rest, and we would officially be broke left searching for an ATM. 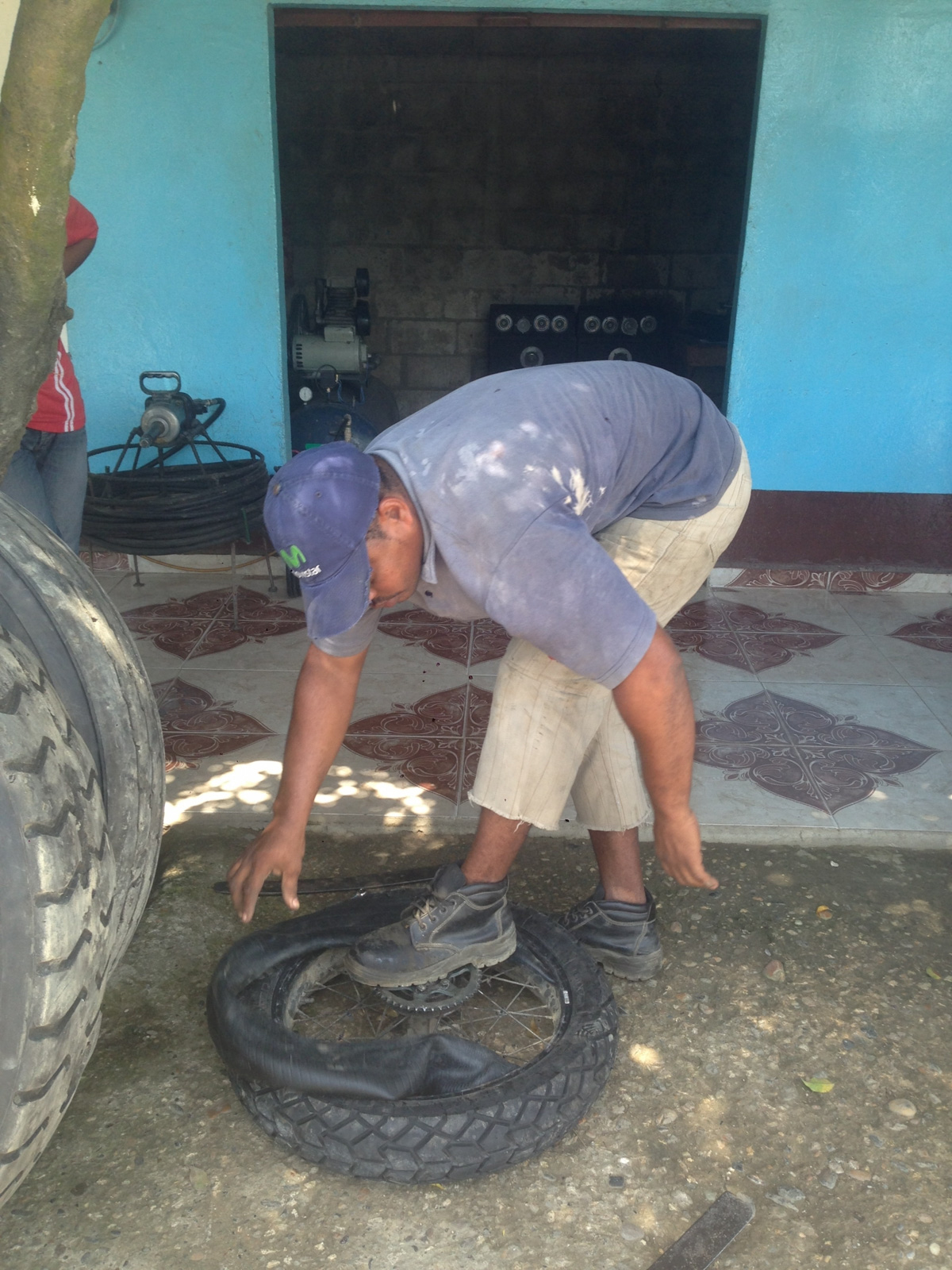 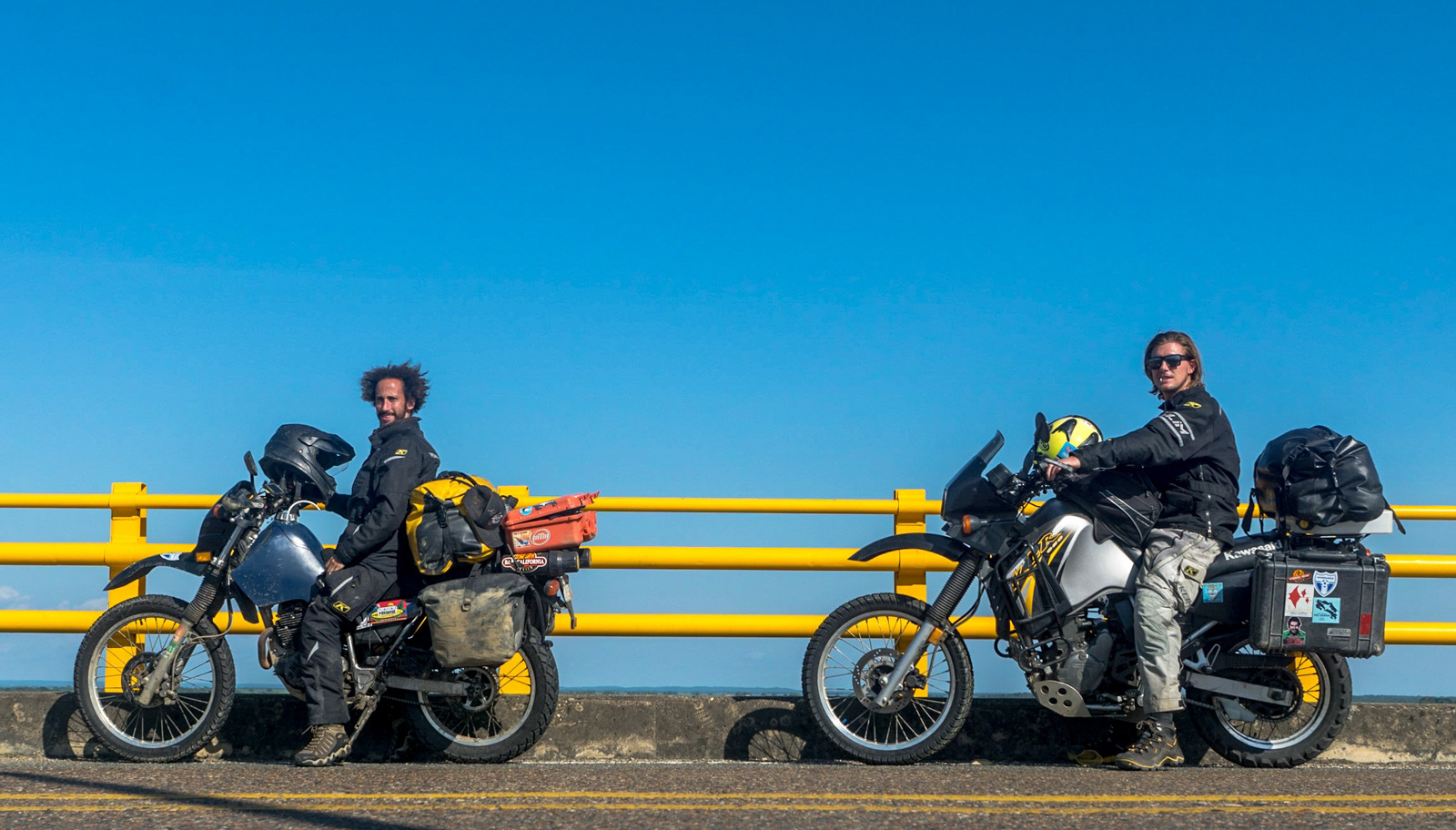 With our first flat behind us we continued towards Santa Cruz de Mompox following the Rio Magdalena weaving in and out of small sleepy villages, and crossing bridges. The road was quite good and well paved up until about 15 KM outside of town where it quickly turned to dirt and mud. It was exhilarating and fun to see life in this remote part of Colombia. There were kids playing soccer and food vendors in the streets. Amongst the chaos, locals zoomed around via motorbike or bicycle mostly giving us odd looks, and for good reason. As we headed down the dirt track with the setting sun on our left, and the river on our right we were quickly stopped by a local, “Van a Mompox? Eso camino es cerrado.” 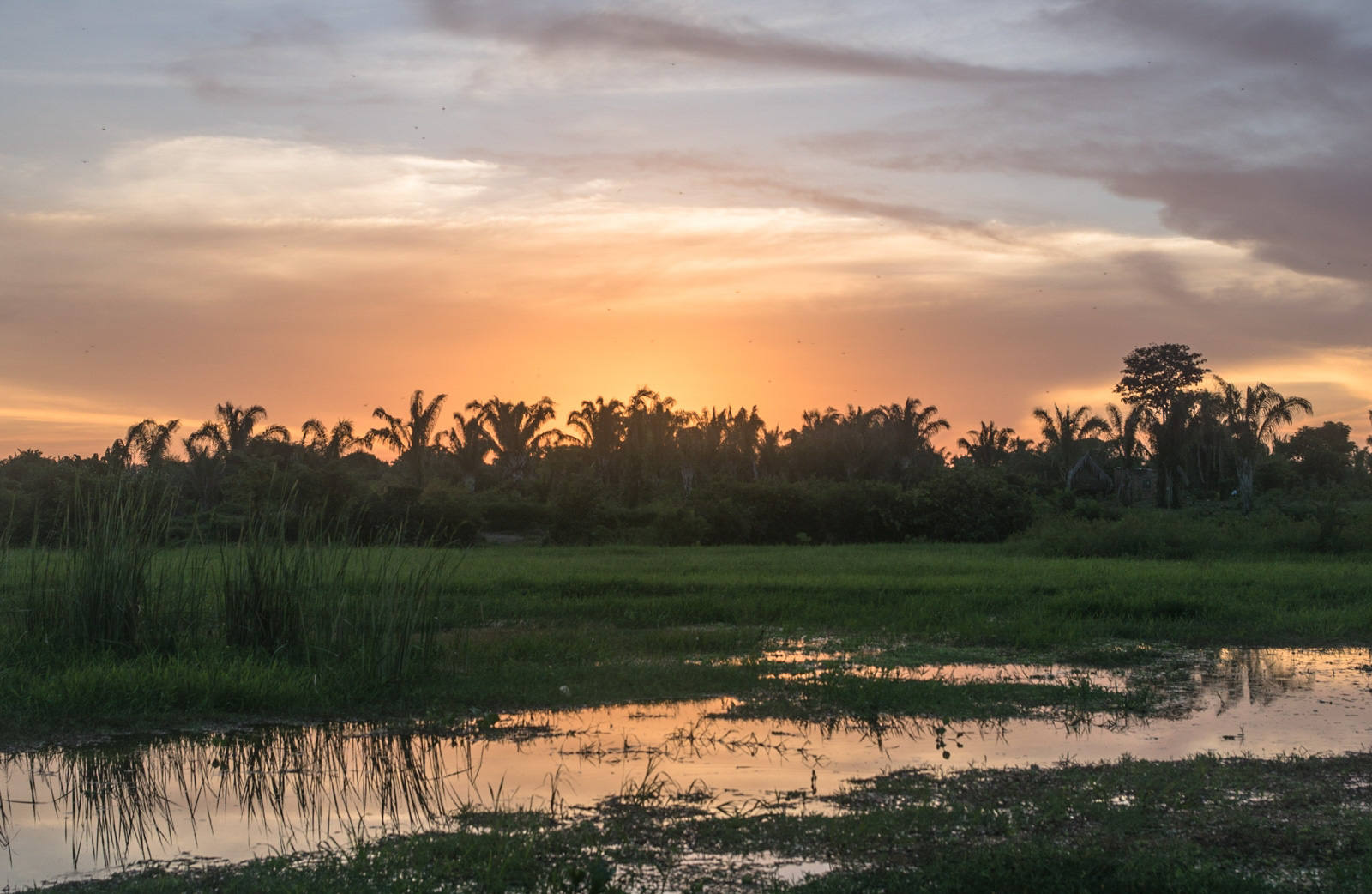 Was the road really closed? We were instructed to turn around, head towards the church, make a left, and find the canoes. Canoes, you´ve got to be shitting us? We were running out of daylight and had no other options really. As we approached the river bank we were greeted by welcoming Colombians in their dugout canoes. What seemed like a slightly sketchy river crossing was the norm for the people that inhabited this area. The bikes were individually loaded into separate canoes and off we went into the setting sun!

The road on the other side was beautifully paved and we made it to the hotel Antonia reached hours before us, even with the bus! Damn she´s crafty. She took the more direct route via the paved highway and large ferry, while we naturally chose the adventure route…because, well, ADVENTURE…DUH!

Once in Santa Cruz de Mompox we scouted out a few things to do. The main attraction is actually outside of town, slowly cruising through the wetlands and marsh via boat exploring the Rio Magdalena, which runs almost the entire length of Colombia. This river provides life: food, water, transport, and agriculture. We had arranged a river tour for late in the afternoon and had all day to kill.

Wandering the quiet and tranquil, yet picturesque Colonial Colombian town we ran into a friendly 16-year old girl, Maria, riding her bike with her new puppy, Nico, lounging in the front basket. Her personality embodied what we have learned to love so much about Colombia, especially out in the countryside. Warm and welcoming, and filled with gratitude. We ended up spending the majority of the day with Maria. We took turns racing her bike up and down the cobblestone streets and playing with Nico. We explored a few church’s, and even snuck into the bell tower accidentally giving it a few rings. By late afternoon we found ourselves all sitting around a table in her Grandpa´s backyard sipping on coffee and chatting about his farm and the different types of trees and plants he sells. We were beyond lucky to see and experience such an amazing side of Colombia. 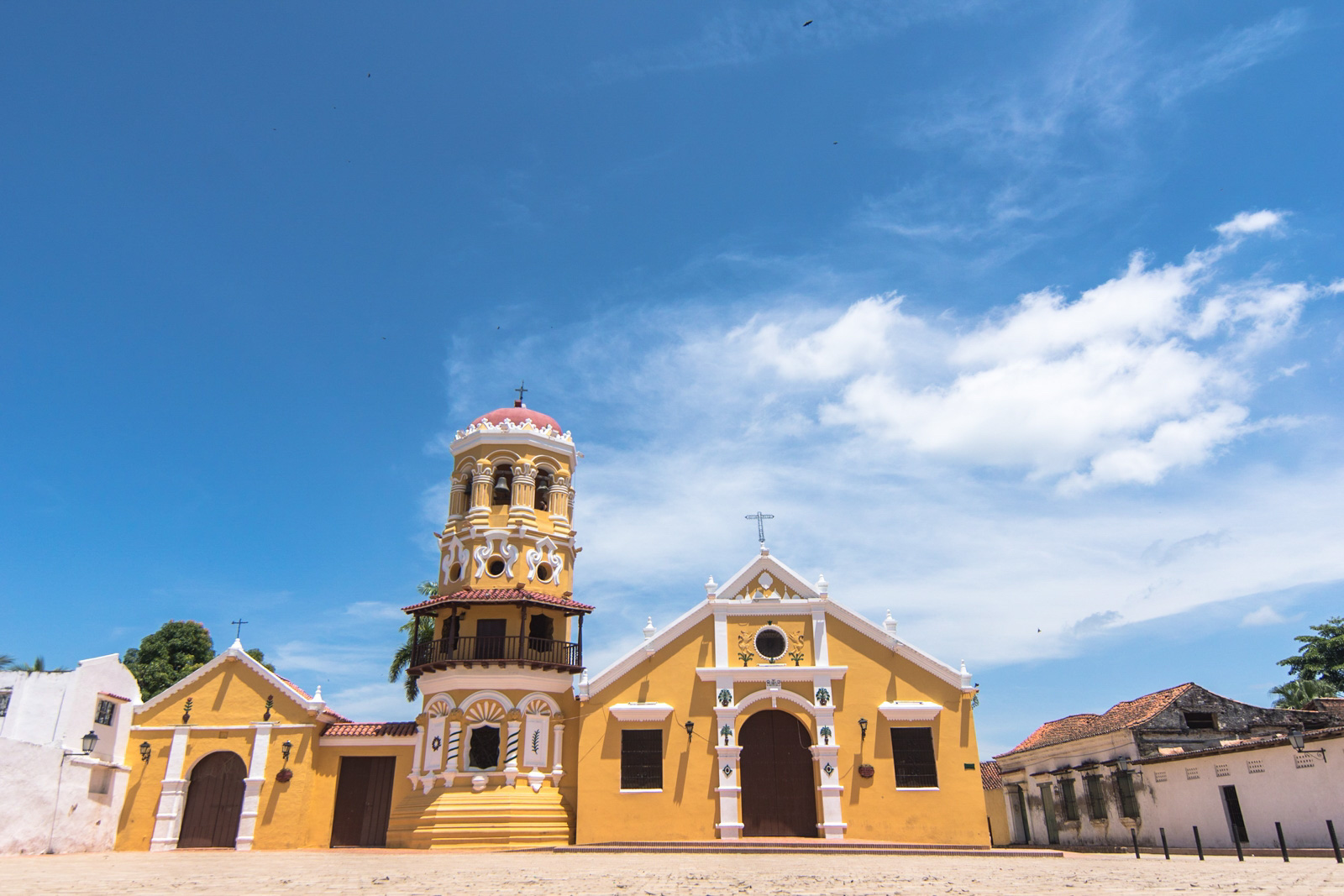 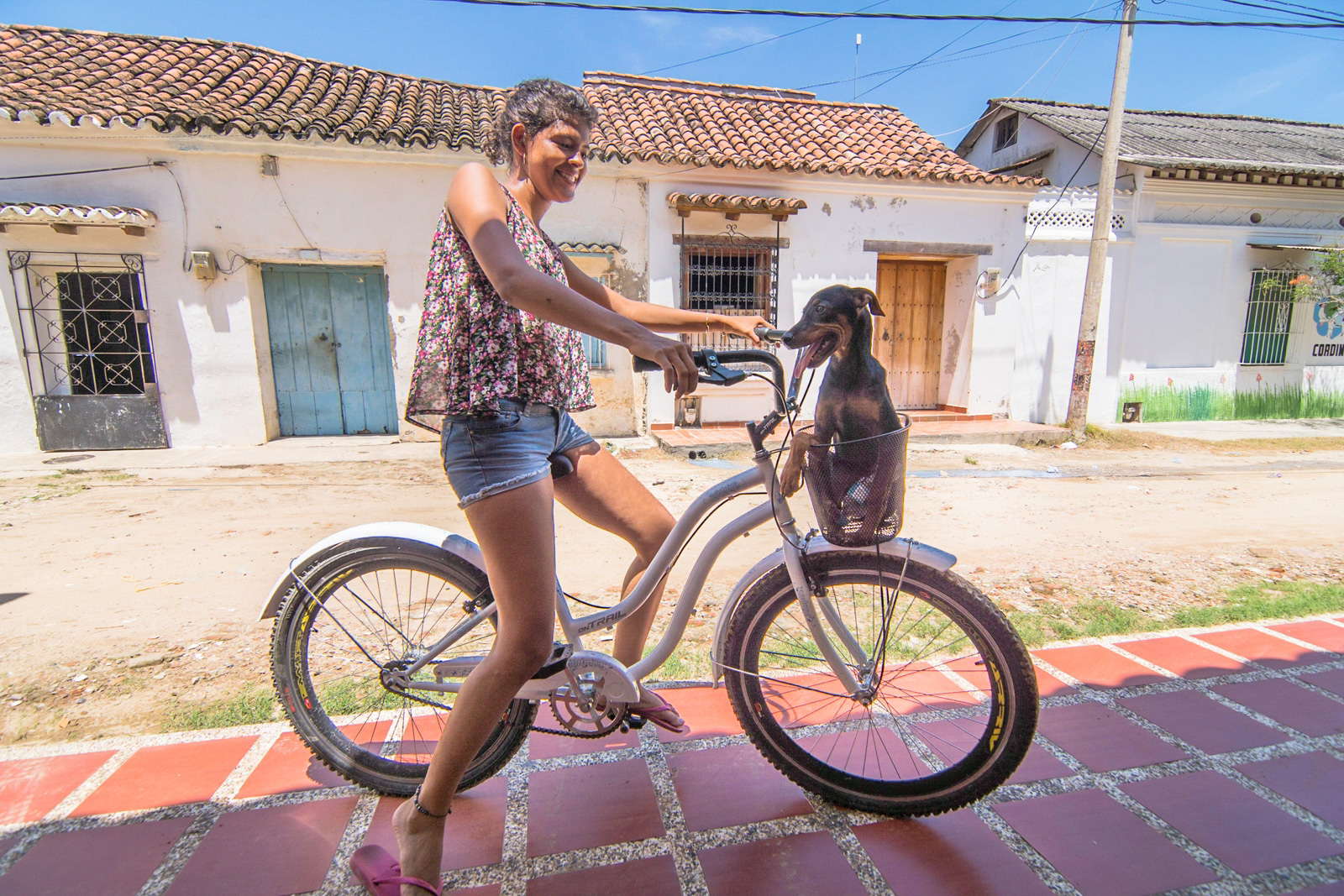 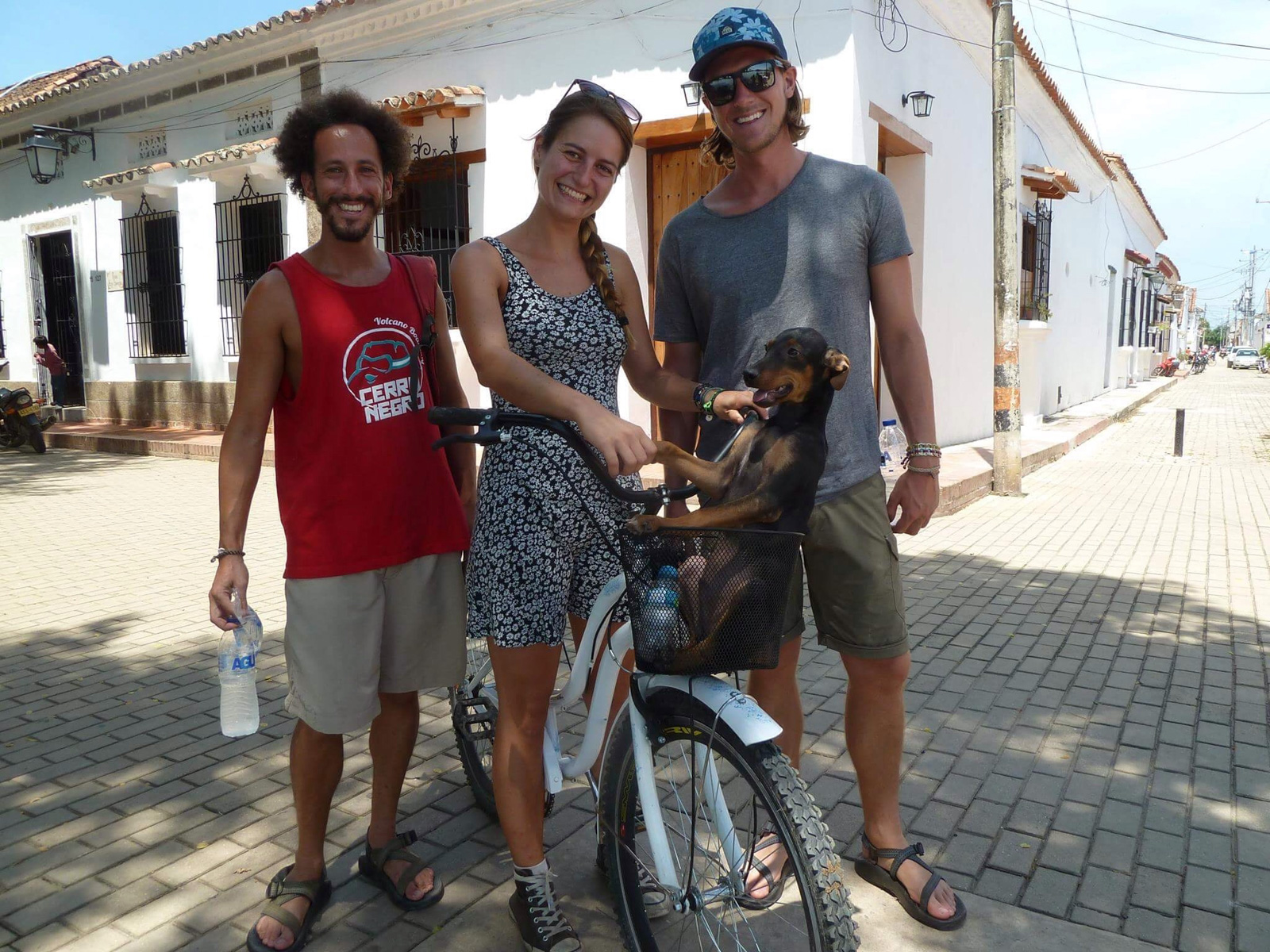 All jacked up on coffee it was time to hit the river. We boarded our boat and began to navigate through the river slithering through the tight grass and reeds. It was beautiful and massive, almost too the point where it was hard to take in the sheer scale of the river and the network it reaches (P.S. Someone buy us a drone!). It reminded us of the Everglades, minus the alligators and pythons. We passed small villages and locals fishing, and even went for a swim. It was truly an amazing experience to see. 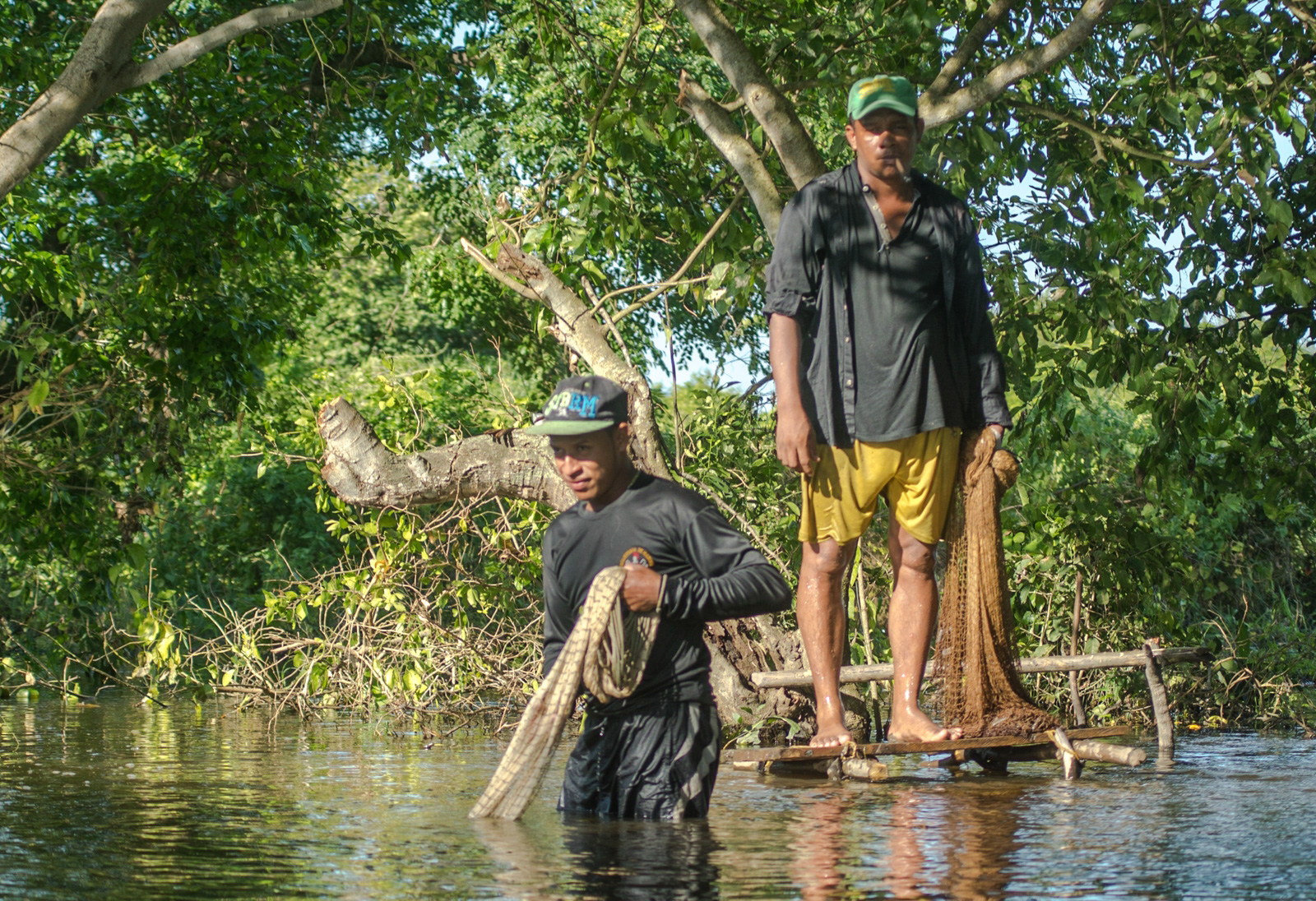 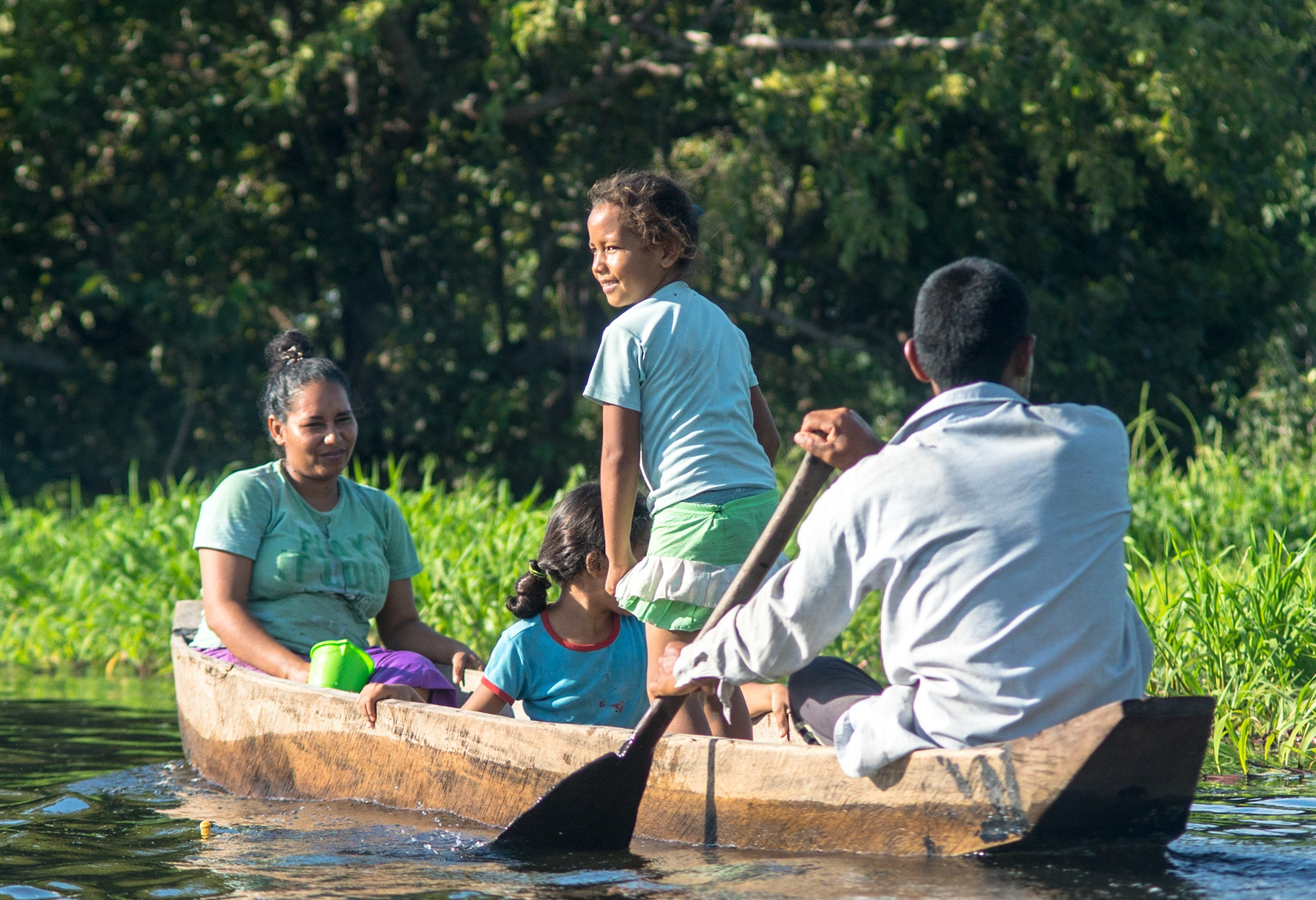 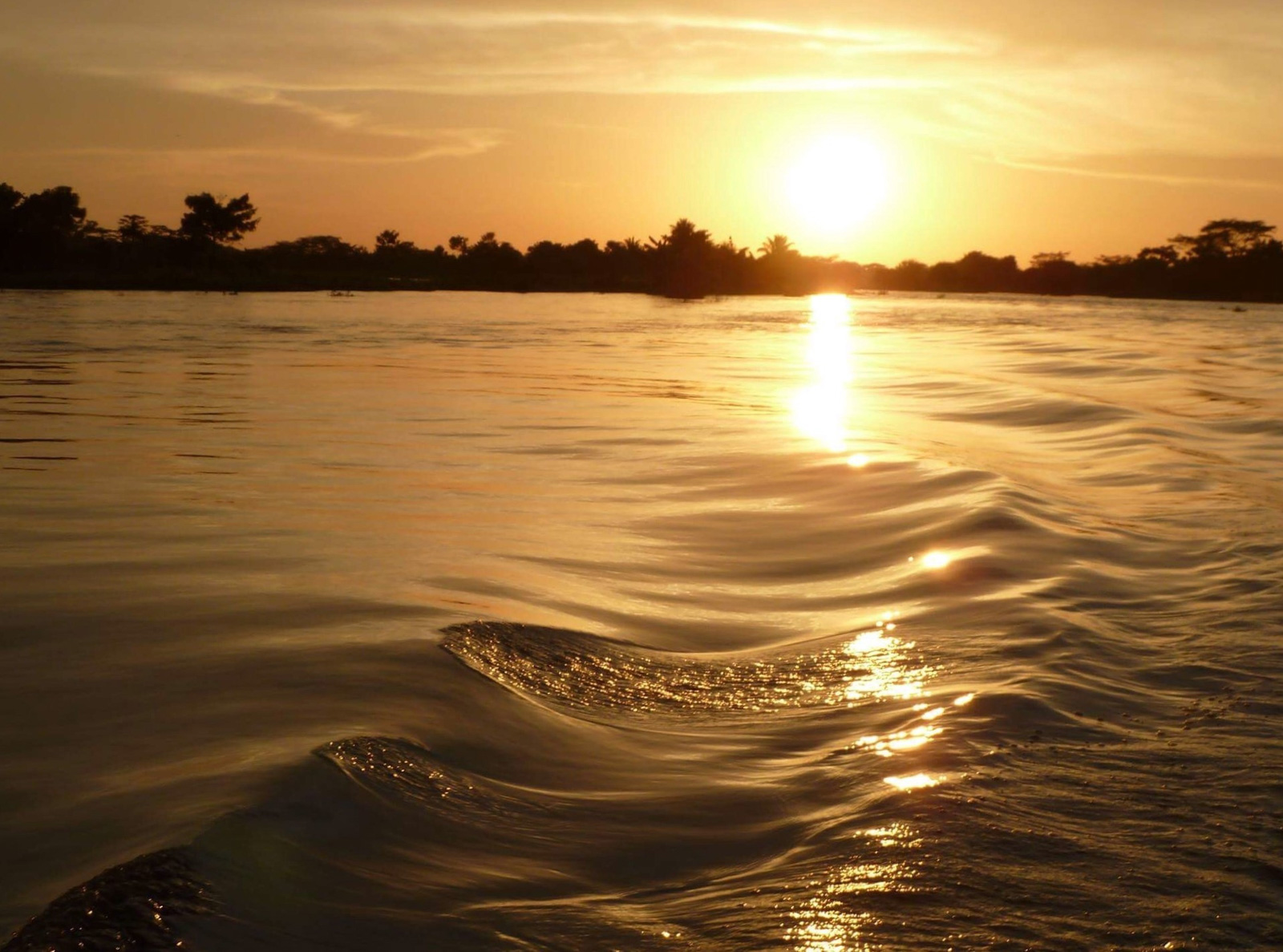 From Santa Cruz de Mompox we continued on south and into the mountains. It was time to get out of the blistering heat, but first we had a few river crossings to hammer through. Antonia left before us on the bus and gave us the heads up. ¨Boys…the road is full of nasty potholes, cows, and a few deep river crossings from last nights storm¨. Sounds fun!

We spent the next 80 KM dodging potholes and cows and having way too much fun puddle bashing through the river crossings. It was a whole community affair. Locals were out in the water directing cars, motorbikes, and bicycles through the river instructing which areas were the shallowest or had the least number of obstacles. It was too much fun we had to do some of the crossing twice just for pictures. 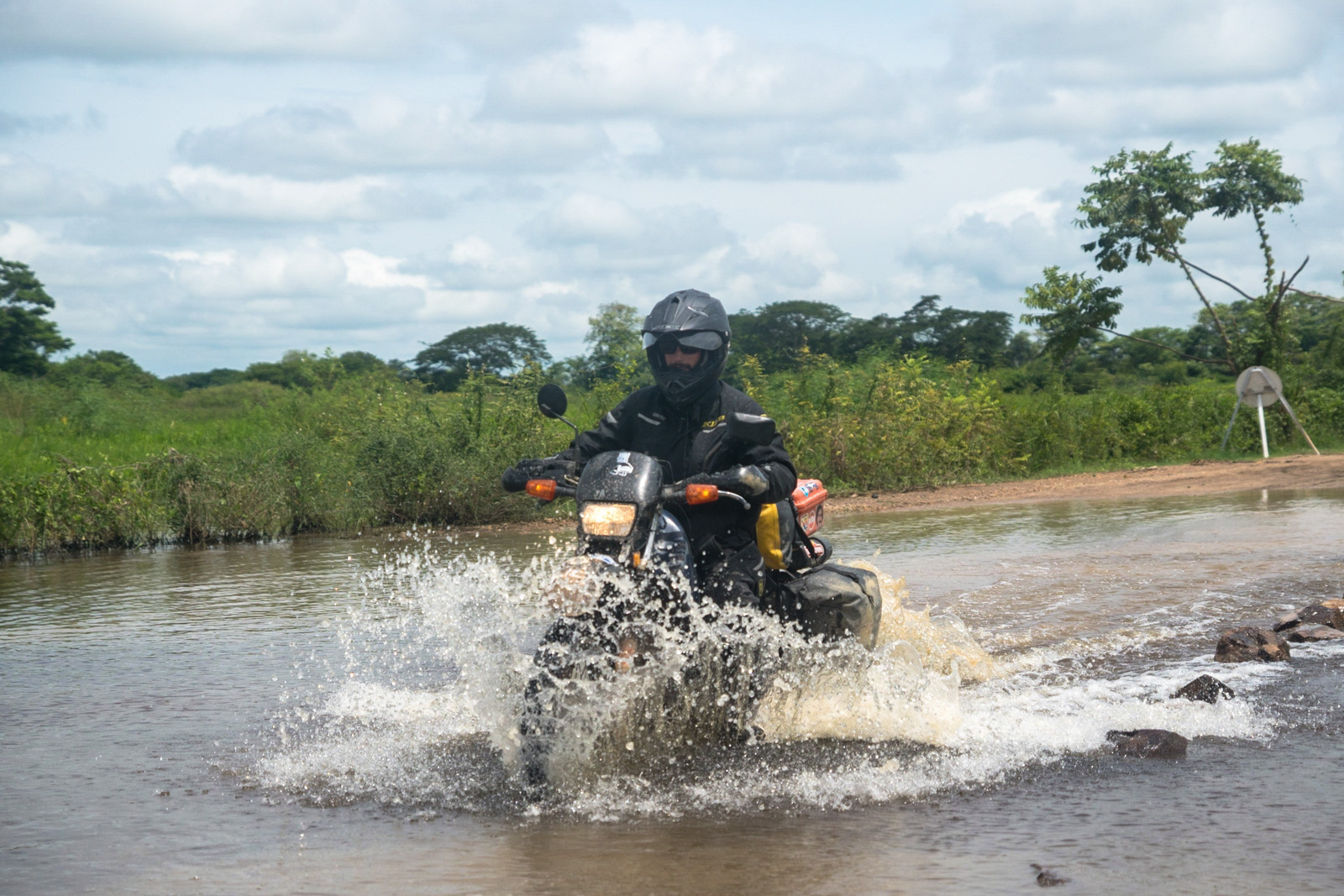 Once back on the asphalt the road improved and was great all the way through Bucaramanga. We were no longer in the swamp and the scenery changed to thick forest and rolling mountains. Man did it feel good to stop sweating! The final stretch from Bucaramanga to San Gil was easily one of the best drives we´d done in months, and no one seemed to even mention it. Heck Lonely Planet doesn´t even mention the fact that there is a massive canyon in between the two that exceeds 108,000 acres and extends 2,000 meters in depth. It was incredible! It took us over 2.5 hrs to drive the 85 KM between all of the hairpin u-turns, switchbacks, and the stunning vistas. 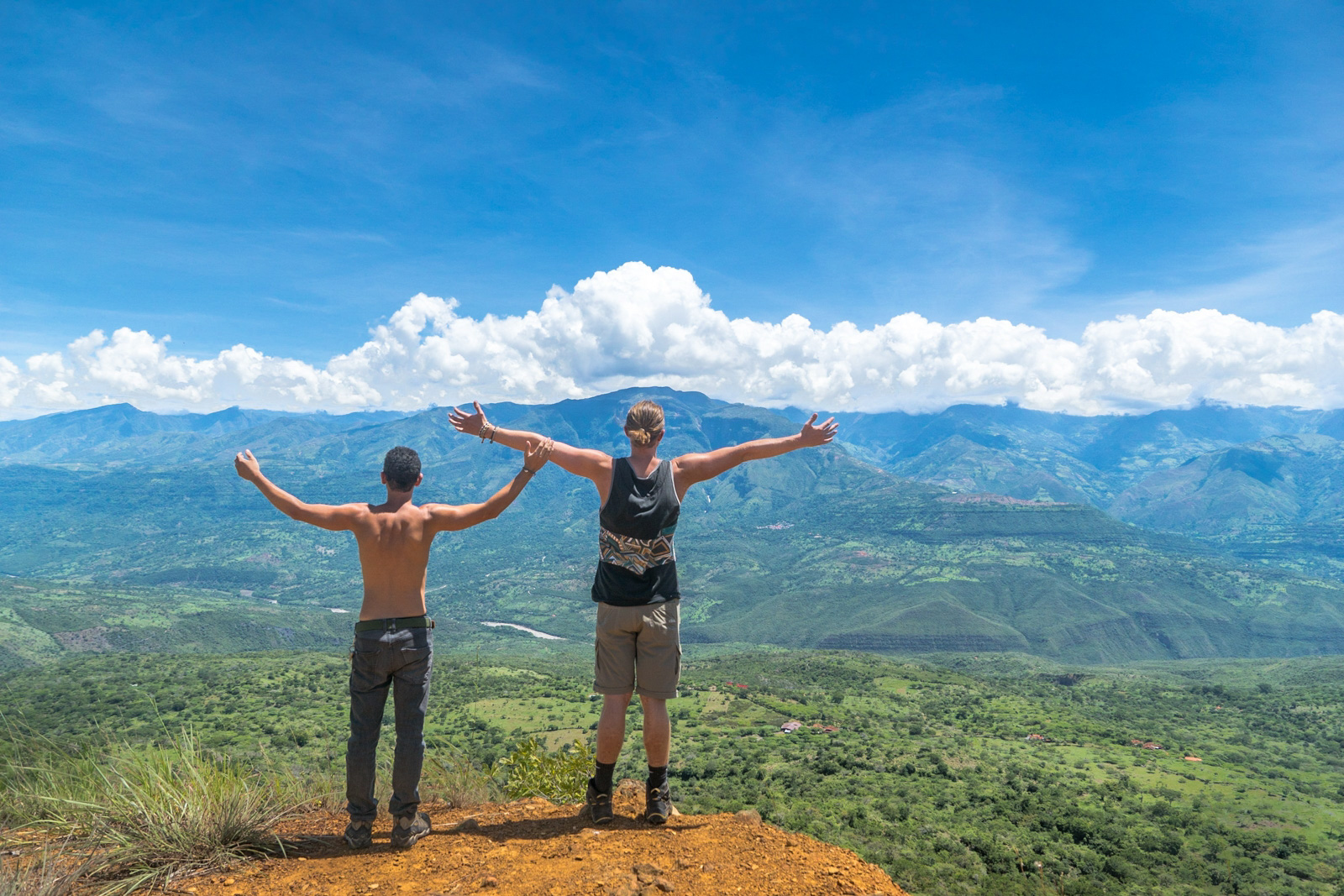 Arriving in San Gil we met back up with Kyle and Allen who we´d met in Mexico. We all had one real question urging to be answered…how can we explore the Chicamocha Canon? There was clearly only one answer…parapente or paragliding!

Now soaring over the canon like a condor sounded fun to the rest of the group, but Justin was being a little bitch, and the group surely made him aware of how much of a pussy he was being. He had no option but to go. We all headed up to the canon and got suited up. Justin´s boyish stature and the fact that he weighed as much as a 12-year old girl meant he had to go first. Fuck!

Suited up Justin stepped to the edge of the canon and per the instructions of his guide got ready to run off into the abyss. In reality, this never happen. The second the chute opened his legs were airborne flapping around. The initial takeoff was effortless and smooth. All that anxiety for nothing! 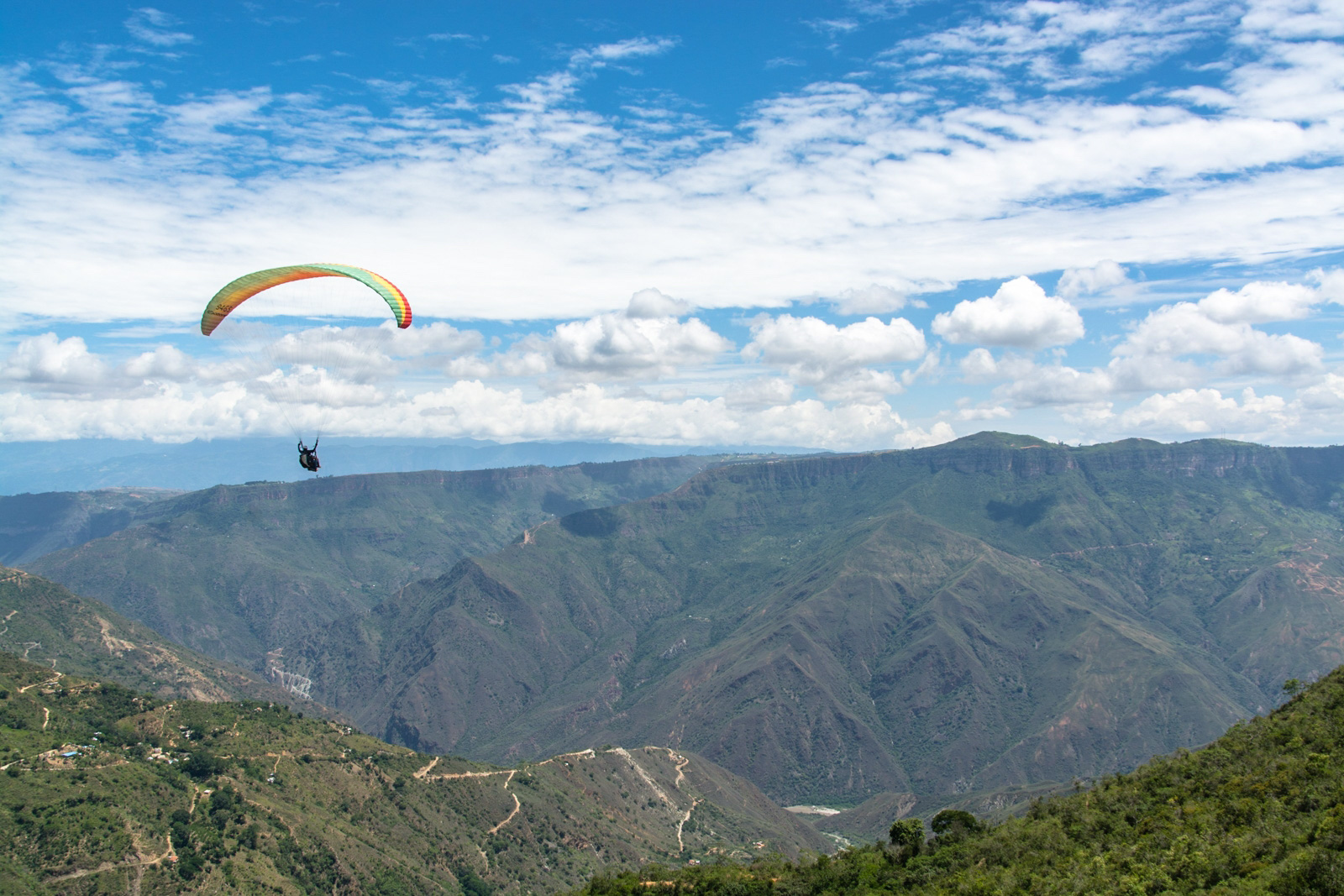 One-by-one we all took our turns at flying. The views of the canon were truly spectacular. Each one of us  grinning ear-to-ear with excitement. Now the average flight time should have been about 45 minutes, but unknown to Justin he was up for over 2 hours while everyone else sat at the landing spot waiting tired and hungry. Had he flown away?

His guide had tried to land, but missed the landing point, which was fairly common apparently. The problem became apparent though when he heard his guide shout ¨Puta Madre!¨. That’s never a good sign. The guide assured Justin everything would be alright. They just couldn´t catch enough thermals to get high enough to land so it was time to discuss alternative landing points: the river below or the national park. After circling around for what felt like an eternity they eventually landed in the national park and waited for the rest of the group to pick them up. Sorry guys, beers on me!

The rest of our time in San Gil was spent enjoying the cool weather, going for hikes, and enjoying some epic riding through the neighboring small towns of Barichara and Guane. 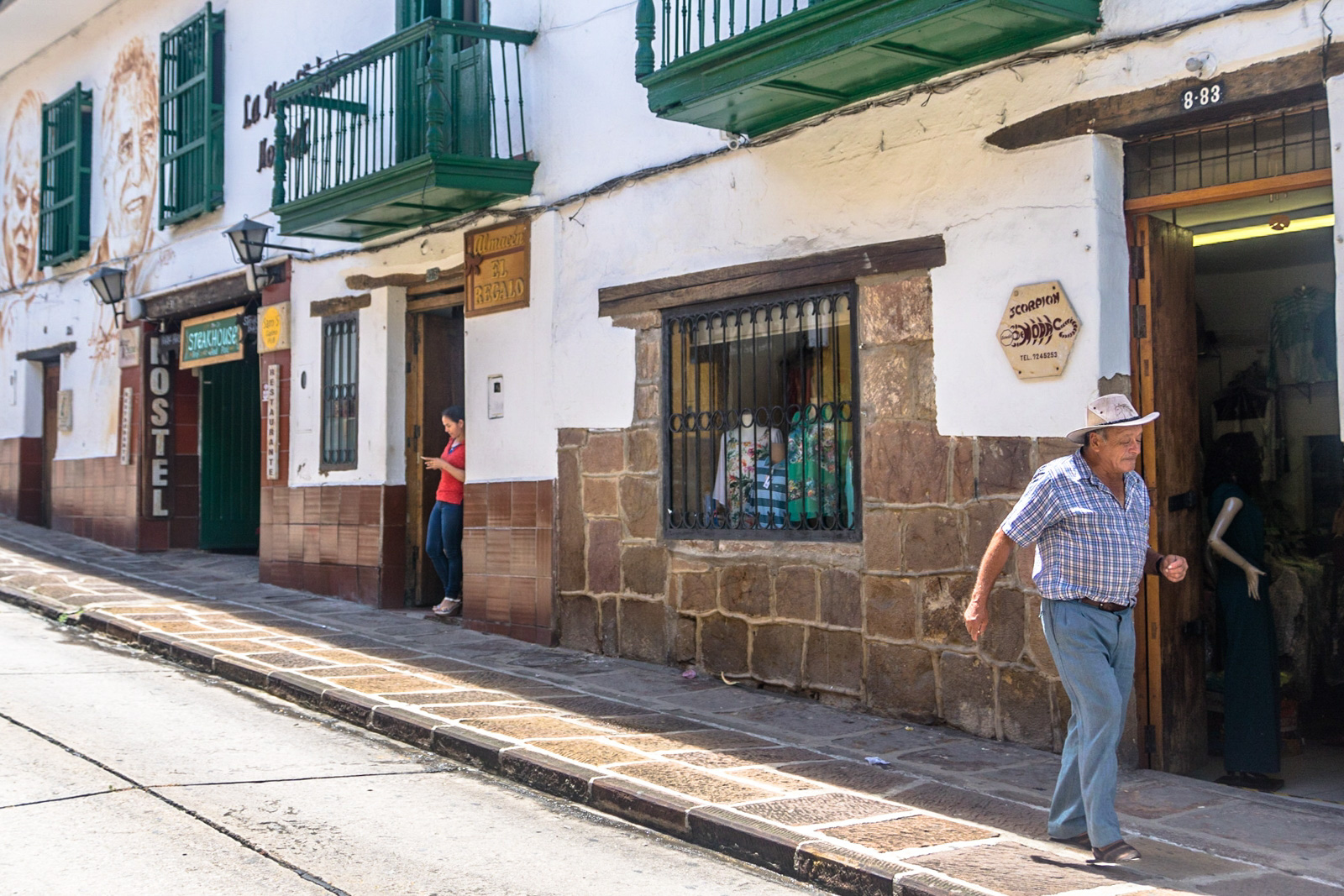 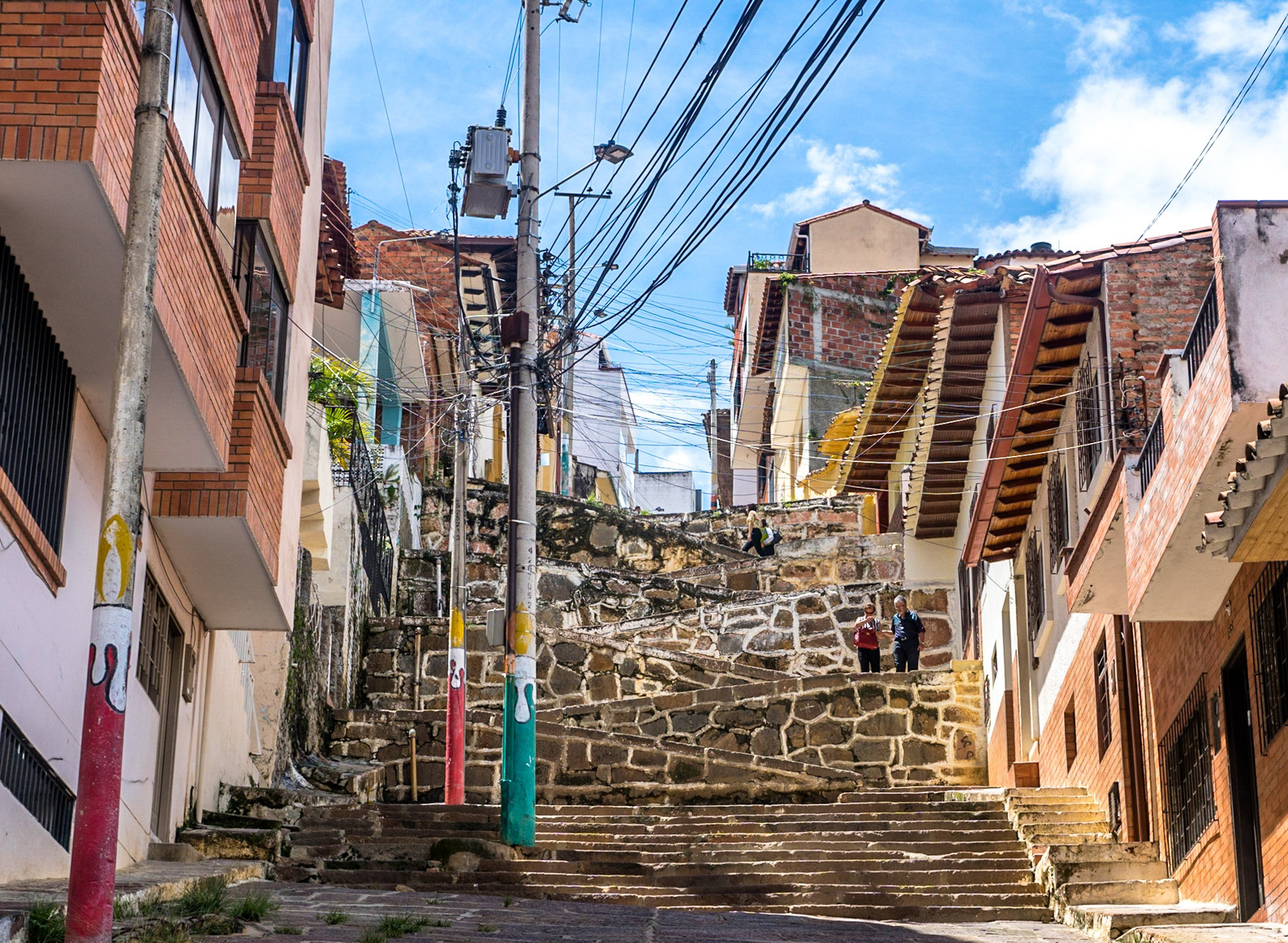 The Colombian countryside has been strikingly beautiful, and has rejuvenated our spirits.