Landing in Colombia was a world-wind of a journey. Getting the bikes unloaded and through customs was easy and by 3 PM we were free to roam South America! For the first time in the entire trip the team would split up as Mitch had to take care of some business back in Colorado (golfing, wedding, and drinking an IPA or two were on the docket).  A vacation from his vacation? Probably not…With so many people to see and “activities” to do there was a high probably of burn out…retired life can be so stressful sometimes! Oh well! It could be a worse ;). With the Captain of the Wildcard hooking Mitch up with a place to store the KLR for two weeks he was off and Justin was free to roam on his own! 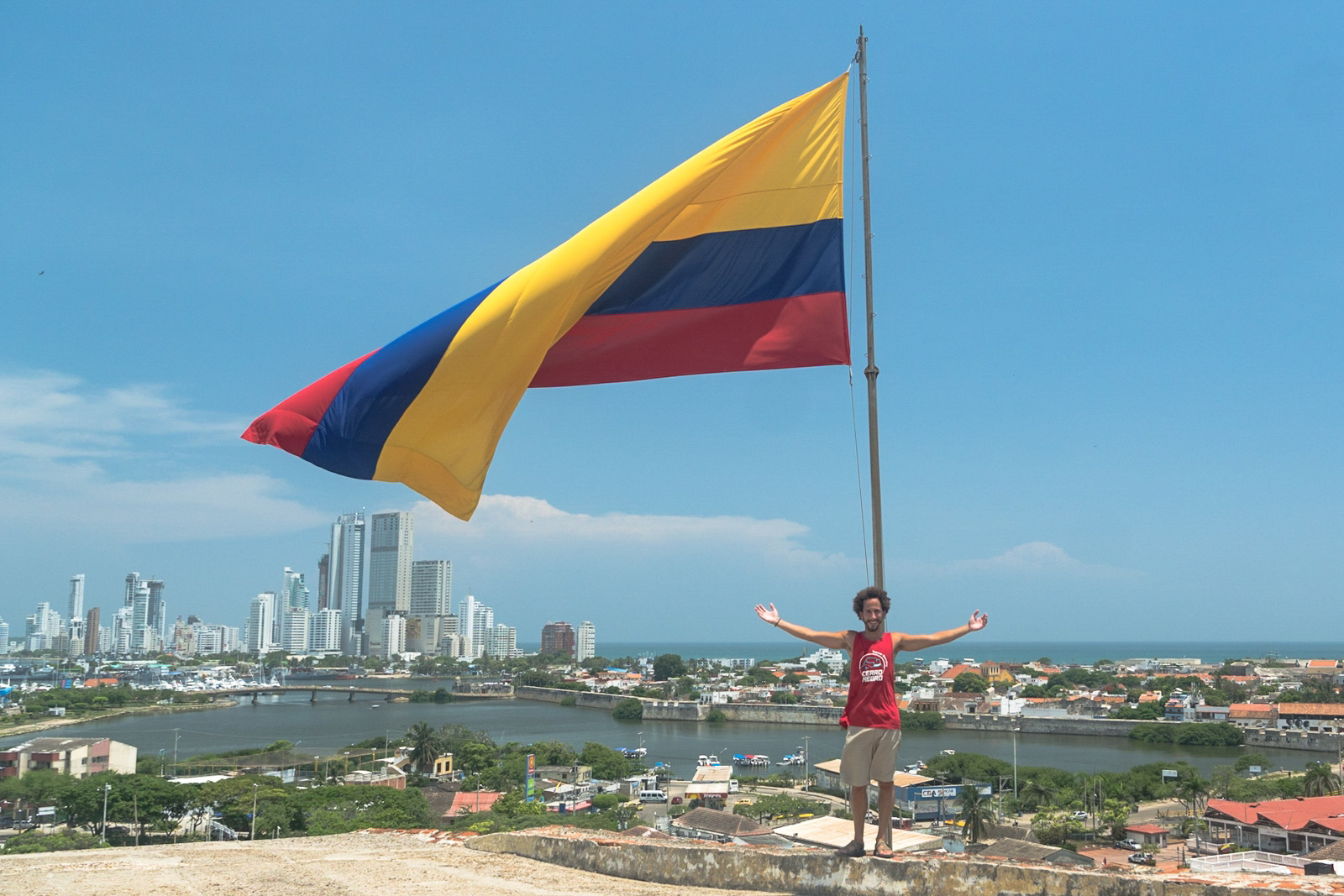 After spending a week exploring Cartagena, I was over the crippling heat and humidity. It was hotter than hell, and unbearable, so I decided to head up to Minca to meet some Dutch friends, (Arden and Monika) we’d ran into in El Salvador, Costa Rica, and then the streets of Cartagena. Most importantly Minca sat at a higher elevation in the foothills to the Sierra Nevadas and rumored to be quite a bit cooler. What everyone failed to mention was that it was rainy season, and the roads would be shit!

Avoiding the tolls, freeways, and traffic congestion, as usual, I decided to take backroads from Cartagena to Minca. This would be the first time I’d ridden solo in months, and I may have gotten myself in a little too deep. The first section of the road was paved with crater-sized potholes, which turned into dirt, until the road abruptly ended or so I thought. 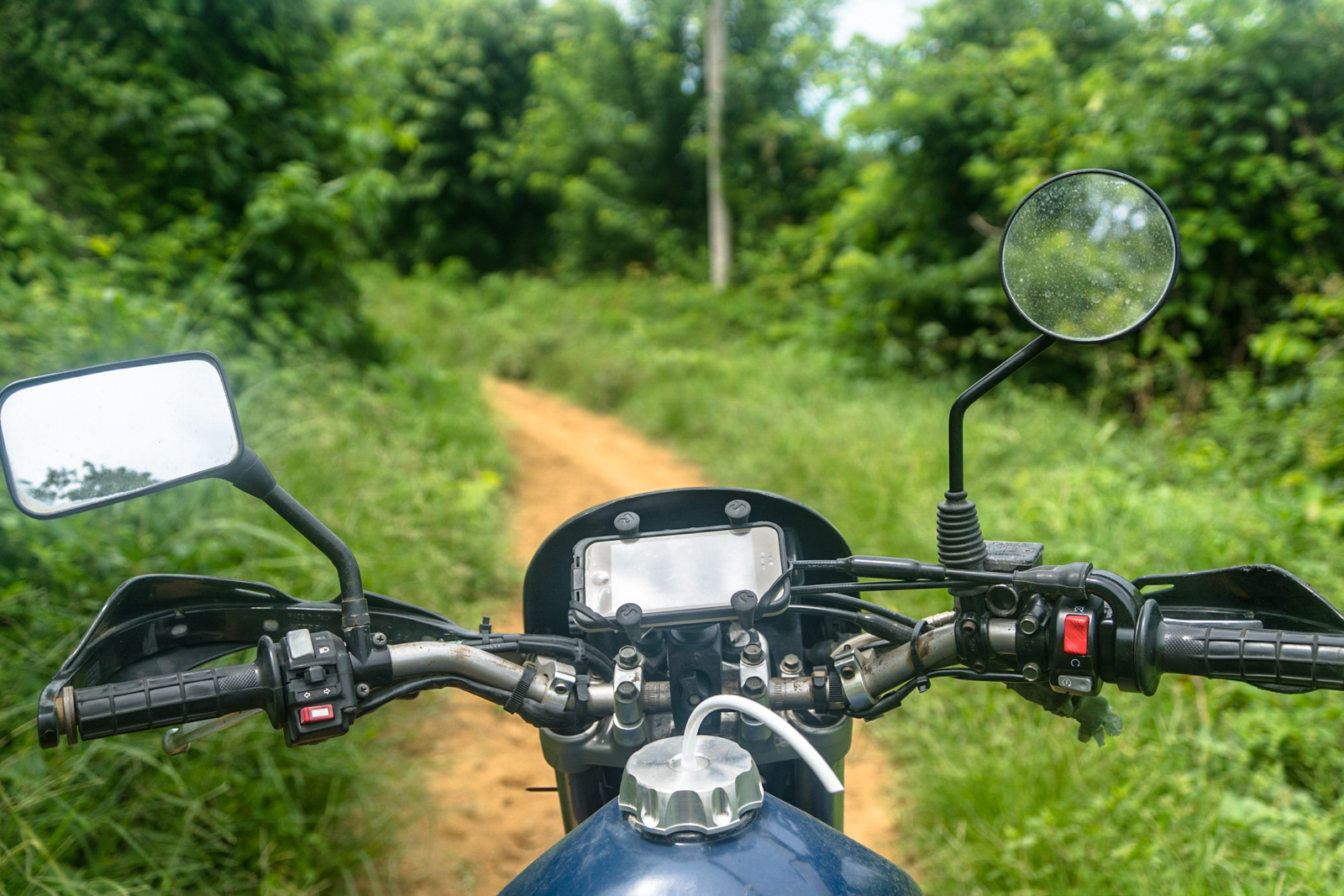 MapsMe showed a road, but staring me straight in the face was what resembled a hiking trail. Not wanting to turn around I pushed on! For kilometers, the road continued like this with tight single-track. The only other people I saw were farmers on horseback, who insisted this was a road that would eventually “improve”.

Well, it did not! It got worse, and worse, turning into deep mud and multiple bike drops, before ending at a river crossing. “Should I turn around?”, I thought. Hours would have been wasted! While deliberating two farmers slowly trotted across the river on horseback and asked if I needed help and told me just to cross the river, “Es asfalto en 200 metros”. Bullshit, I thought, but I had no other options. I hammered across the river and up the muddy bank only to find a town full of potholes which immediately turned to brand new asphalt! Son-of-a bitch!! South America your civil engineering is astounding. 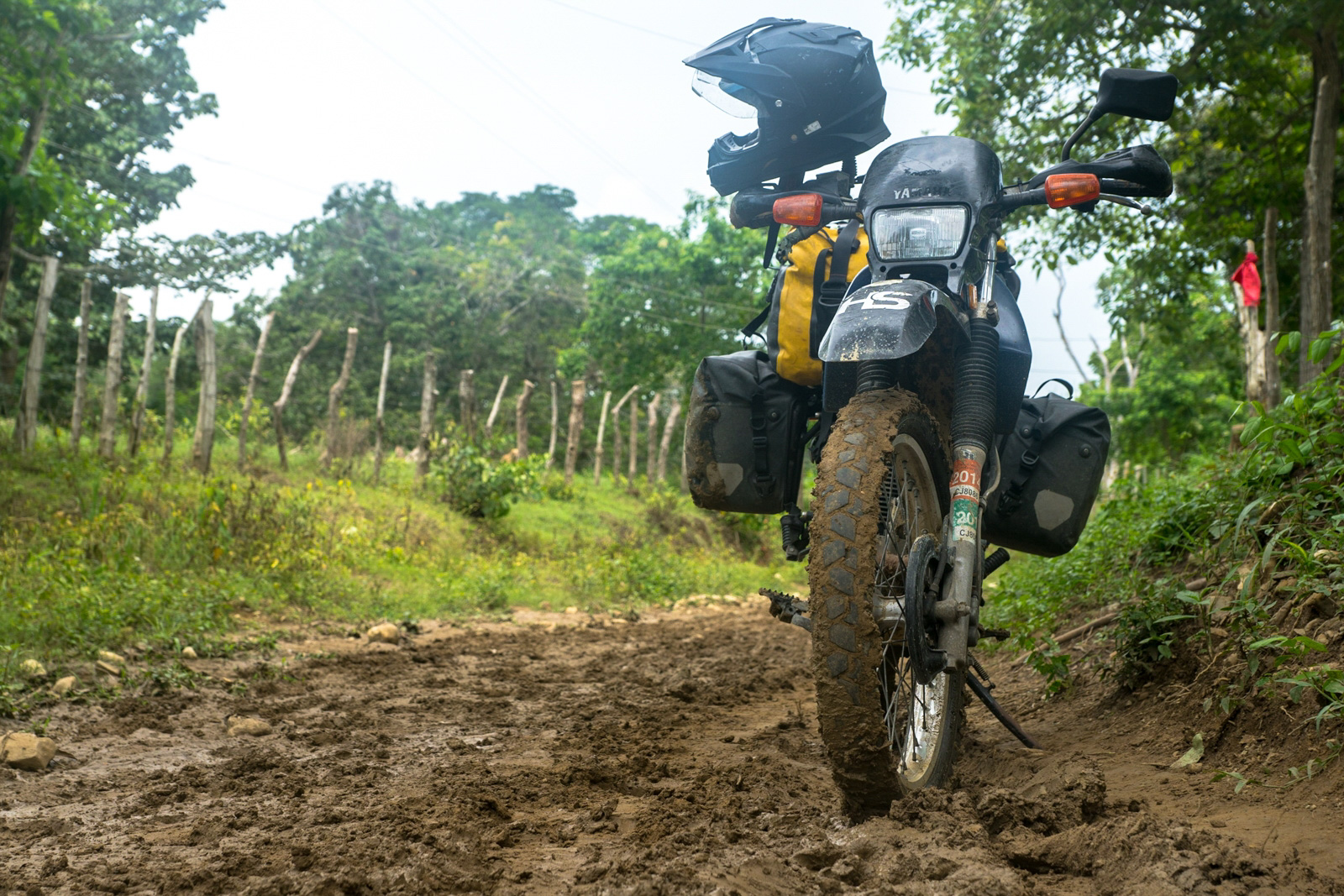 Making up for lost time I made quick work of the new road climbing all the way to the town of Minca. By this time, it had begun to rain as I ascended into the clouds. The hostel I had wanted to visit was way up in the hills with spectacular views of the valley. The only problem was getting there!

The locals do it daily, so I thought to myself “sure it must be doable”. Wrong! About 1.5 KM into the 7 KM dirt road I eventually called it quits. The road was steep with switchbacks, and caked with thick mud. I had zero traction and repeatedly kept sliding backwards and dropping the bike. It was so slippery and steep that every time I stood up to lift the bike my feet lost grip and me and the bike would tumble further down the hill. From an outsider’s perspective, it must have been hilarious to watch. For the first time in this trip mother nature had one and La Tortuga retreated down the hill in search of a hostel with a “normal” road and entrance. Muddy hill -1, Justin -0. 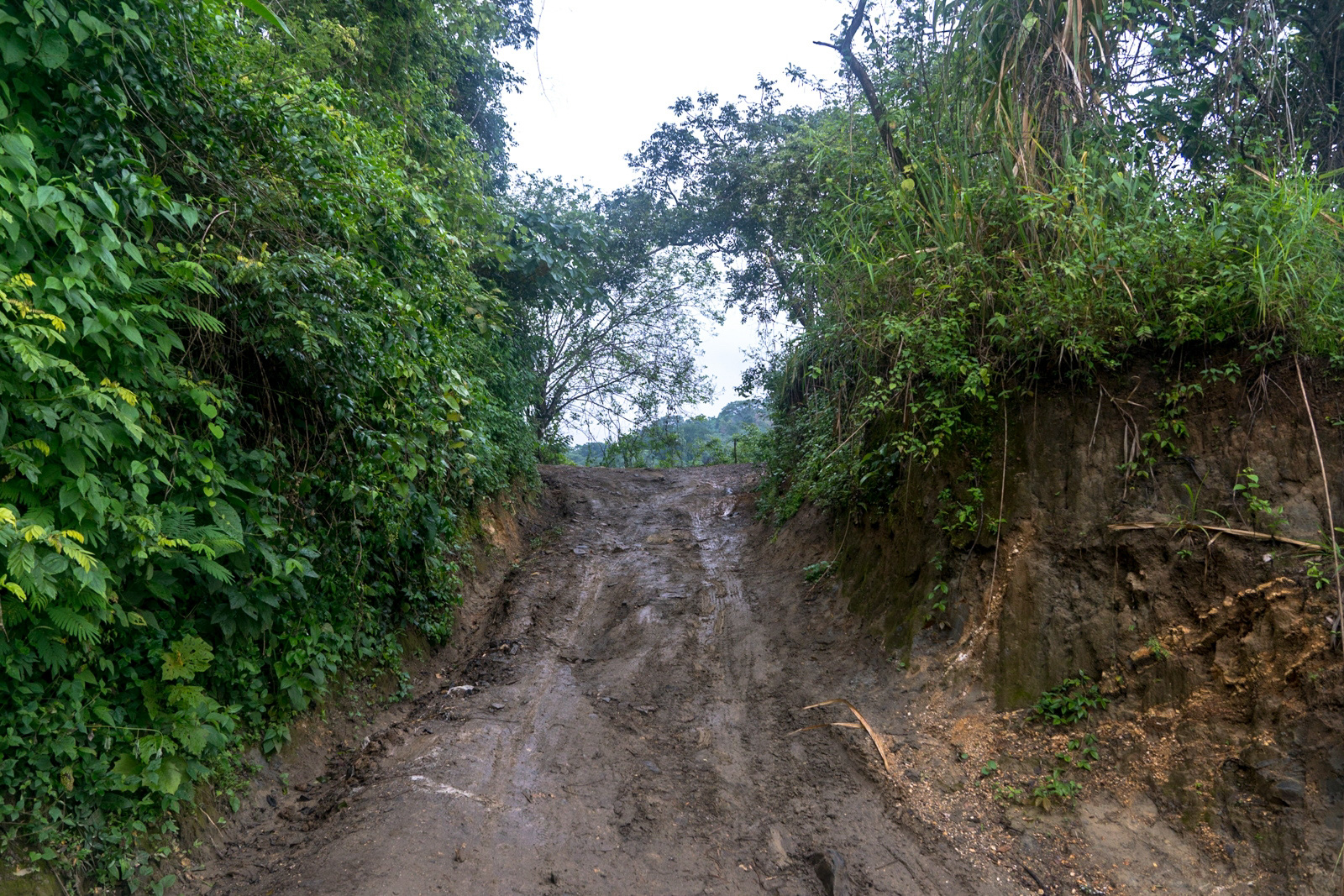 Settled in nicely, I spent the next few days exploring the surrounding area of Minca, hiking to the Pozo Azul waterfalls, and just enjoying not being in the sweltering heat. To be honest there wasn’t a whole lot to do in Minca besides just relaxing, hiking, and enjoying the views. I sadly never did find Arden and Monika, but quickly made new friends to explore with. 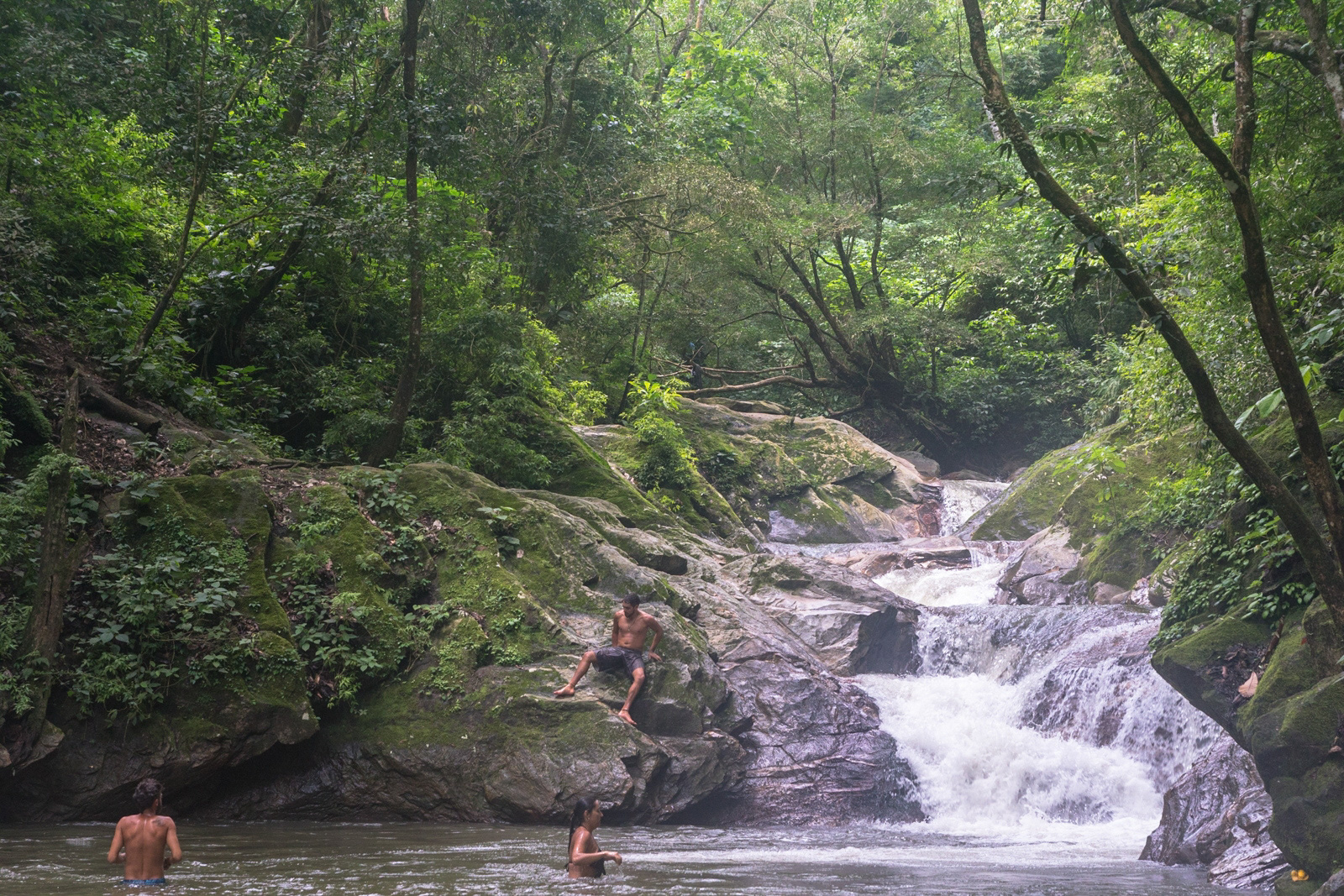 With a few days left before Mitch’s arrival I, along with one of the girls in the hostel, decided to head back towards the coast to Palomino, where Antonia would meet back up as well. The drive itself was incredible with one side of the road being lined by the Caribbean and Tyrona National Park, and the other being the Sierra Nevadas. Arriving at the hostel, I immediately went for a swim while waiting for the others to arrive, and sure enough I stumbled upon my Dutch friends who I’d went searching for in Minca.

The five of us spent the next three days together debating the hard things in life such as do we swim in the pool or the ocean, when will we eat more empanadas, or how many hours left before happy hour? 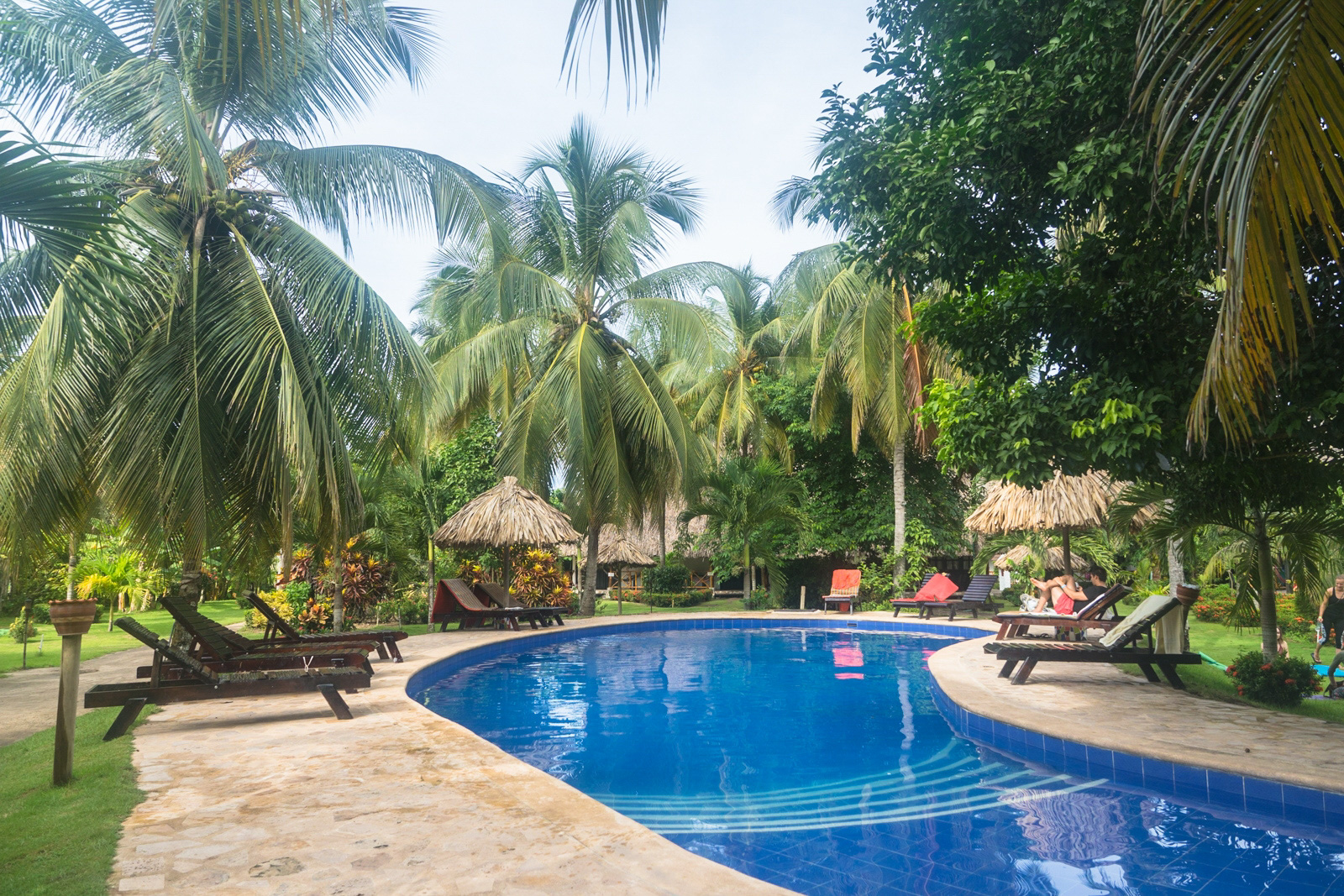 Before everyone separated we knew we had to have at least one good night out. Being in a small touristy beach town we wanted to avoid all the Gringos, and hang out with locals. After some deliberation, the motorbike taxi drivers clued us in on where the Saturday night party was, and off we went. After a solid dinner of street meat, we headed in search of the pink building painted “Discotheque”. What we found was as authentic as we could have expected. The bar was overflowing with people, had a soup and empanada stand outside, and was pumping out Latin music at obnoxious decibels. Inside was full of neon paintings, blacklights, mirrored ceilings, and every 16 year old in town bumping-n-grinding. We quickly bought a bottle of Aguardiente, the local Colombian drink, and attempted to salsa the night away. It was the perfect ending to my intro to Colombia. 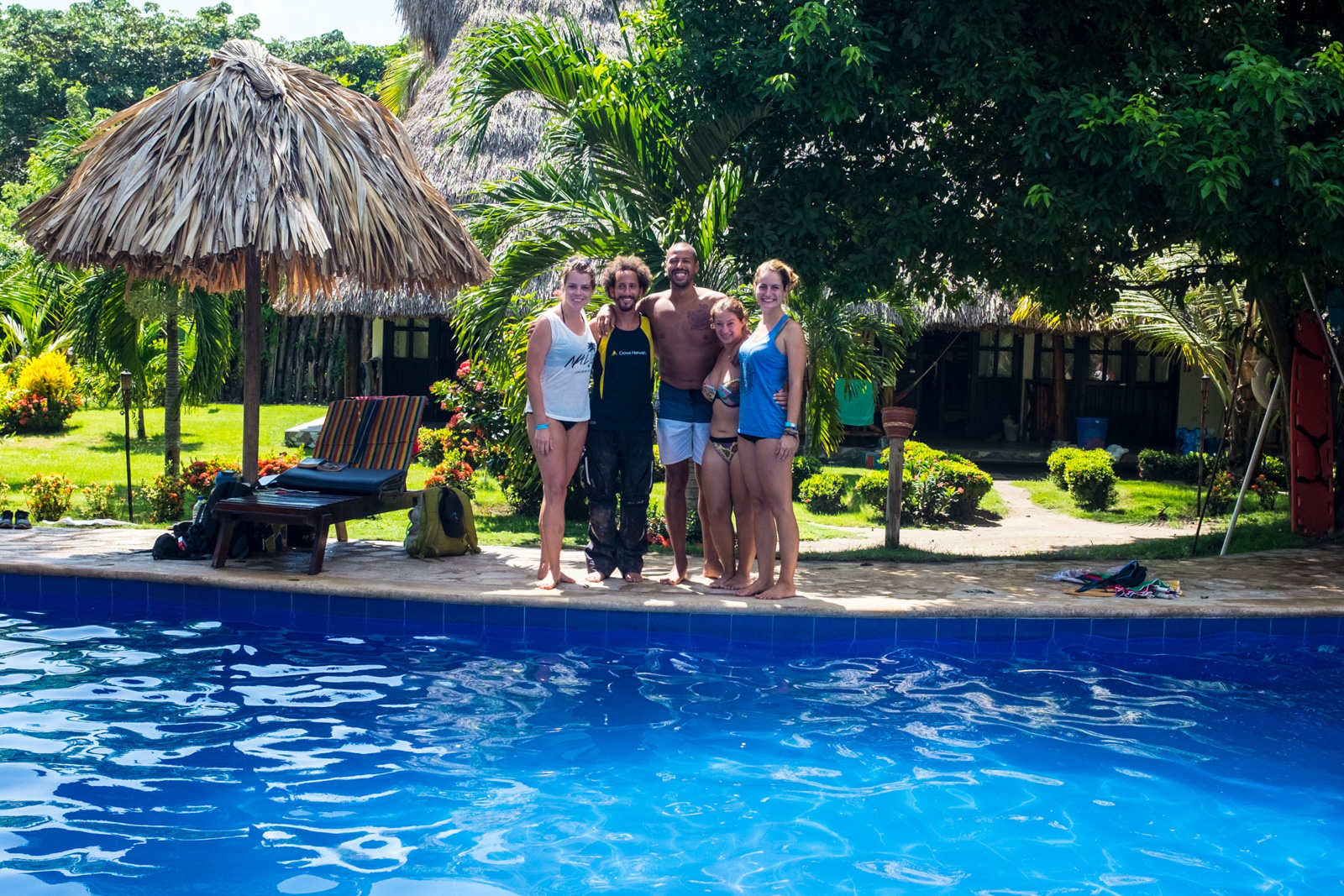