Waking up groggy and a bit exhausted from all the Pacificos and a full liter of Tequila, we were ready to leave Bahia de Los Angeles and head south. Our new friend, Simone, suggested that we take the road less traveled from Bahia de Los Angeles to Punta San Francisquito. It wasn’t the first time we had heard about San Francisquito, but had chosen to avoid it in prior years due to story after story of flat tires. Against our better judgement, we agreed and meandered our way through town onto hard packed gravel roads. 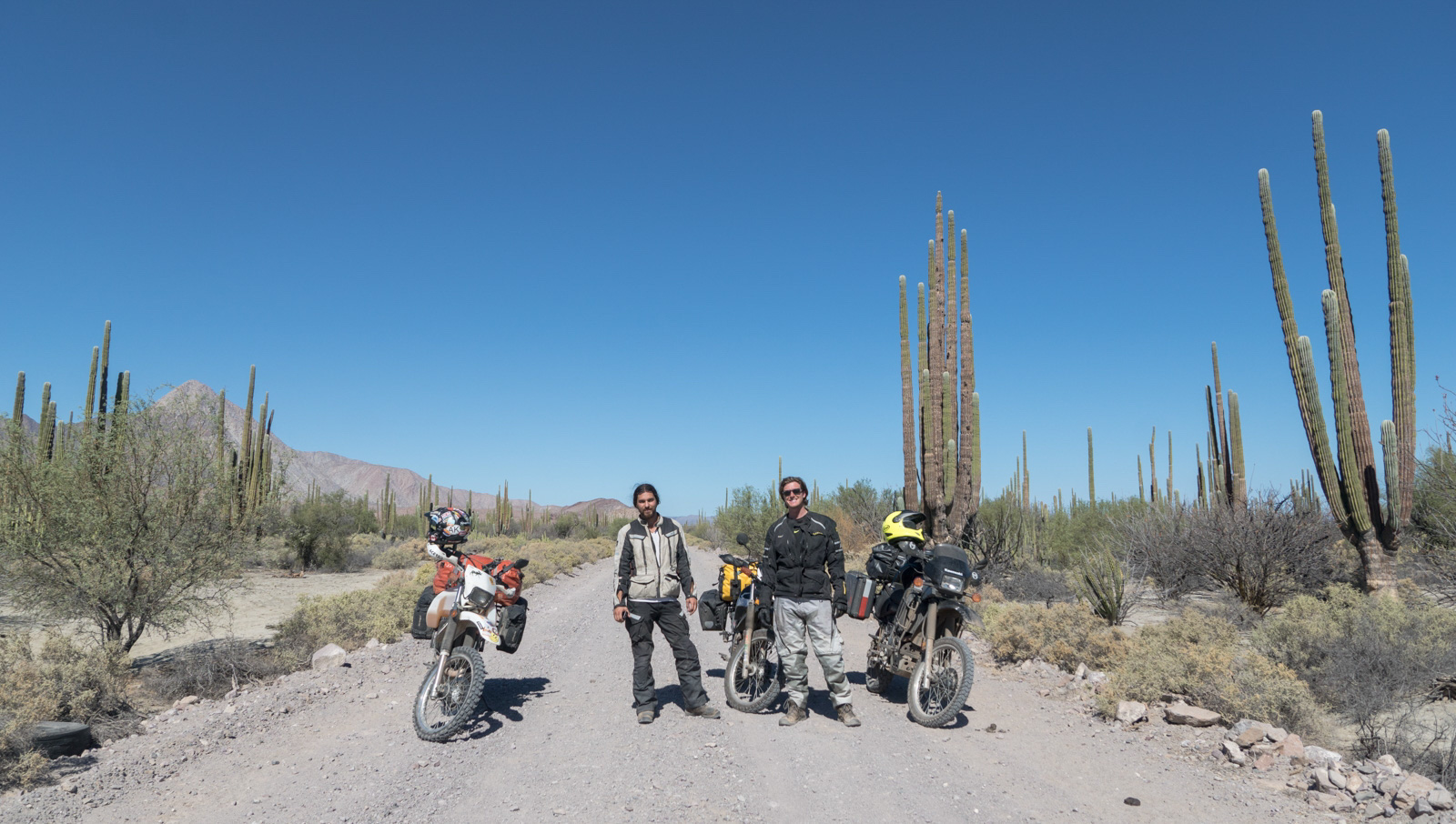 The road meandered on like this for some 70-80 kilometers providing beautiful panoramas of the Sea Cortez. Besides the bone rattling wash-boards it wasn’t that bad. Well that is until we hit deep sand! Kilometers upon kilometers of deep motorcycle demolishing sand! 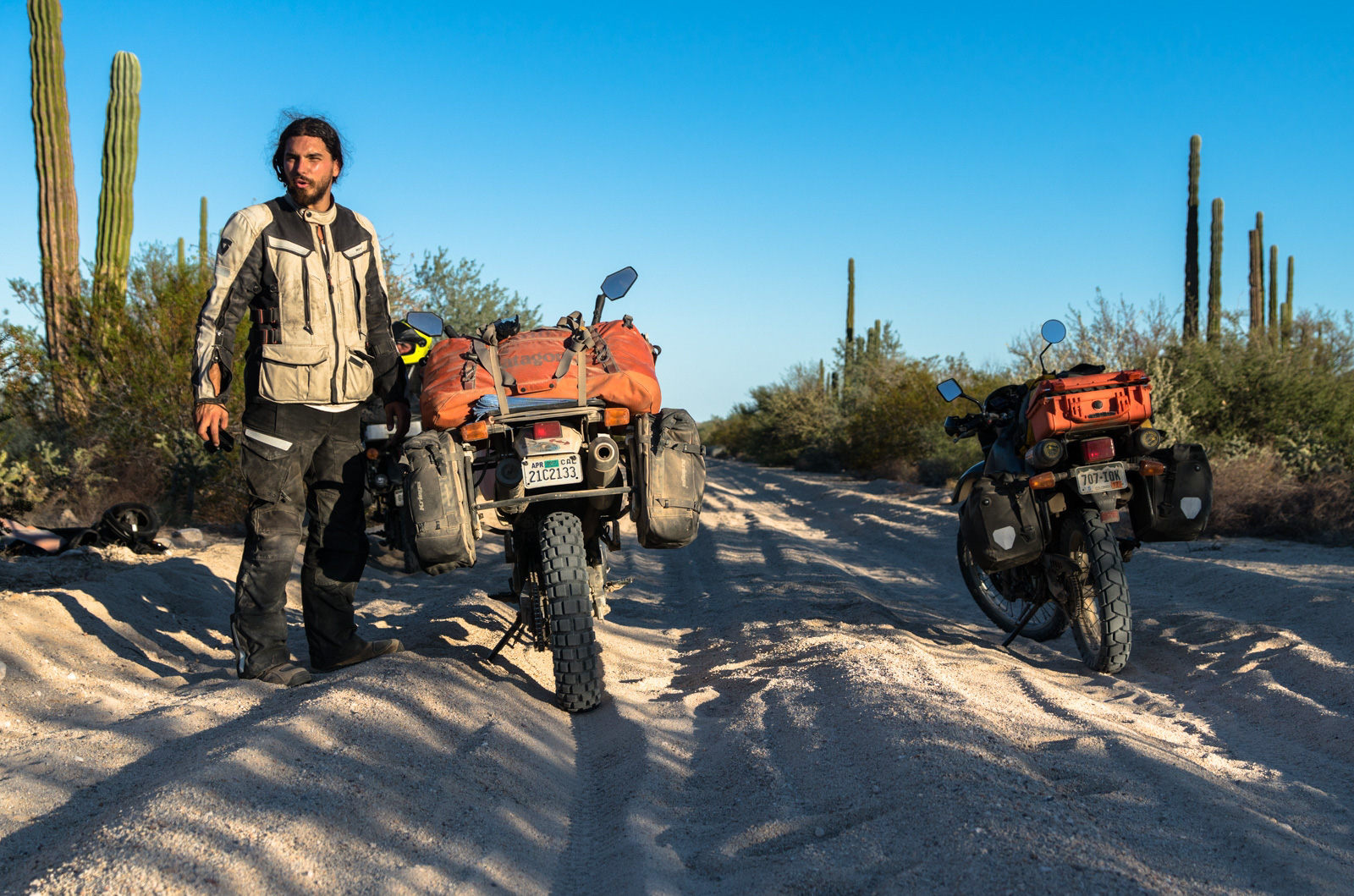 Neither Mitch nor Justin have much experience navigating sand and when we asked Simone for any hints, tips, or tricks his only response was “more throttle you pussy’s!”. Fuck! Every turn was rutted 15 different ways and all it took was one false move or a glance in the wrong direction before the front tire said “nope, we’re going for a ride!”, sending the bike one direction and you the other. Minus Simone, we all had our own moments of glory and self-defeating bike drops. By the end of the day we all had enough sand in our boots, pants, and jackets to build a sand castle. Justin is still finding sand in the rip in his pants weeks later. 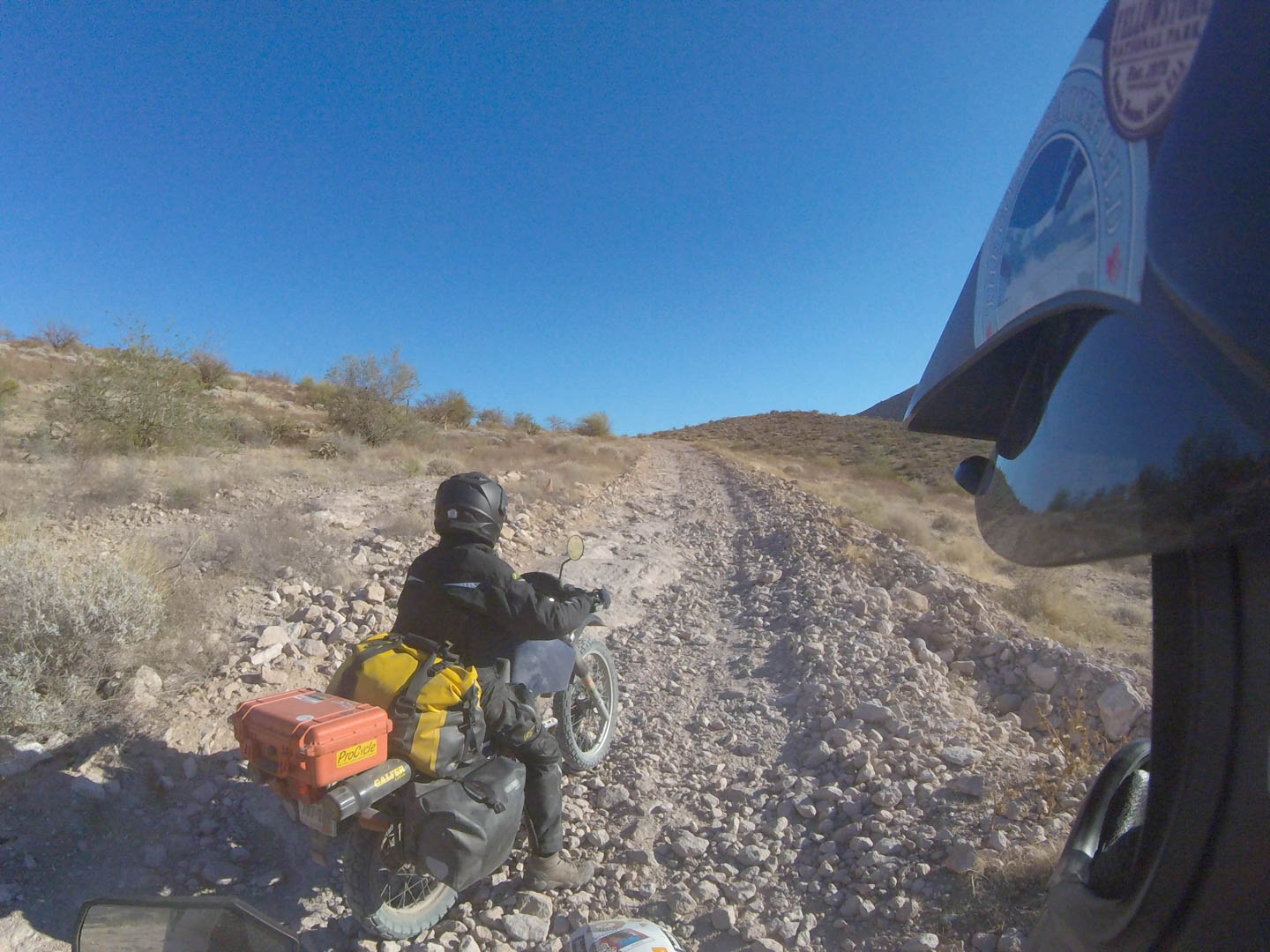 Had we really improved since our Arizona sand encounter? Hell yes! That was a cake walk compared to this. We laugh just thinking about how we thought that sandy wash was “scary”.  While we had grown and become better riders it was still a shit show of a day, especially for Mitch who lost control one too many times.  Once dropping the pannier on his leg so hard the bruises would pain him for the next couple weeks. As the sun began to set we FINALLY pulled into Punta San Francisquito bruised, battered, and having lost at least 10 lbs of sweat. Rosa, the owner at the restaurant, quickly had 3 Pacificos in our hands, and we all went for a dip in the sea to ease the pain. 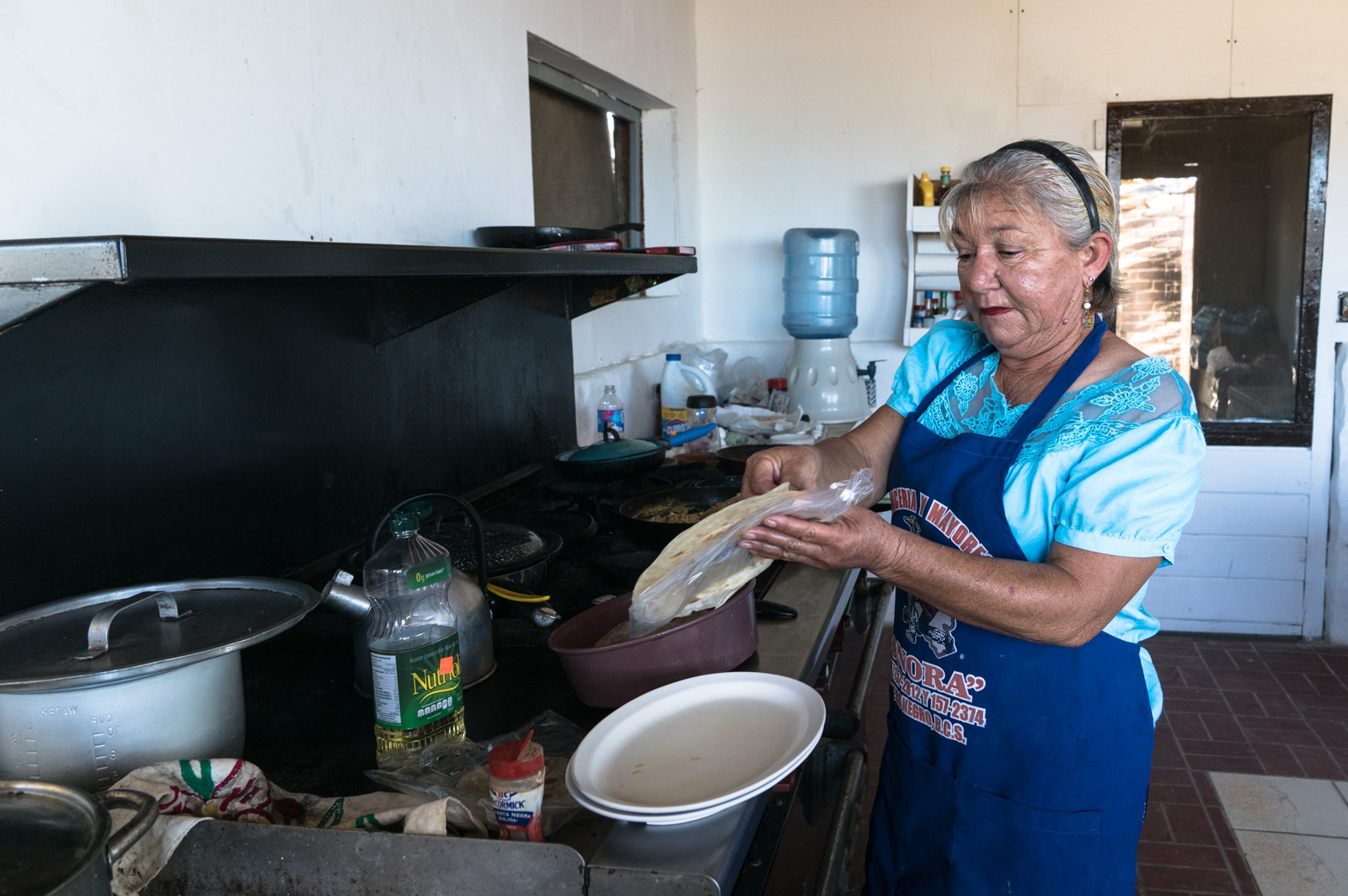 Was the journey to Punta San Francisquito worth it? Well it depends who you ask and how they got there. For us it was a fight, but for Locky and Mary, the only two other campers there, it was a breeze as they flew their little Cesna in for a week of beach camping. That seems like way less work, if you ask me. Despite all the bitching and complaining, and the bruises which lasted weeks, the journey was worth it for a few solitary days in complete isolation. We camped right there on the beach, lounging in the hammocks, kayaking, and fishing.  Next time we go, it’s going to be by plane! 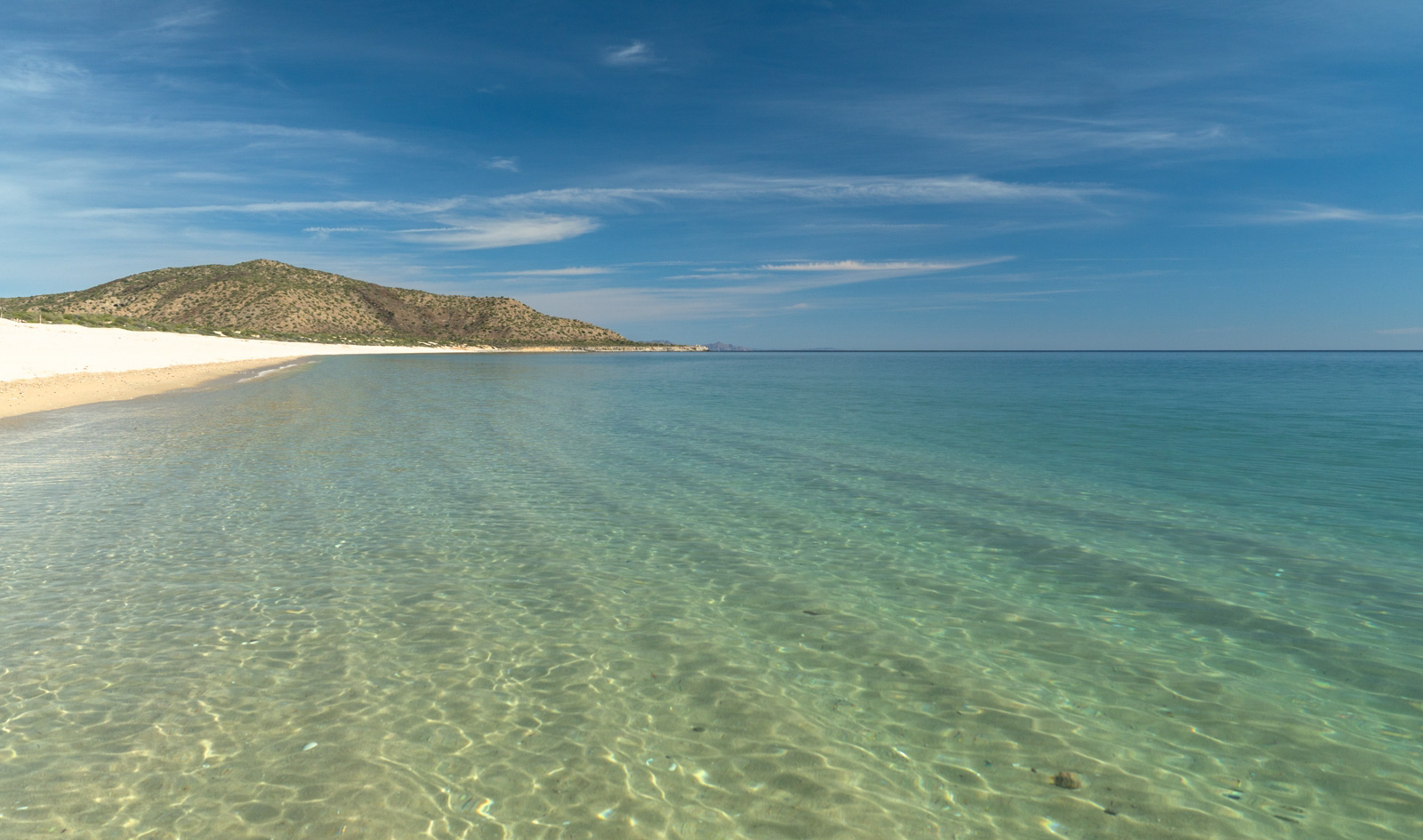 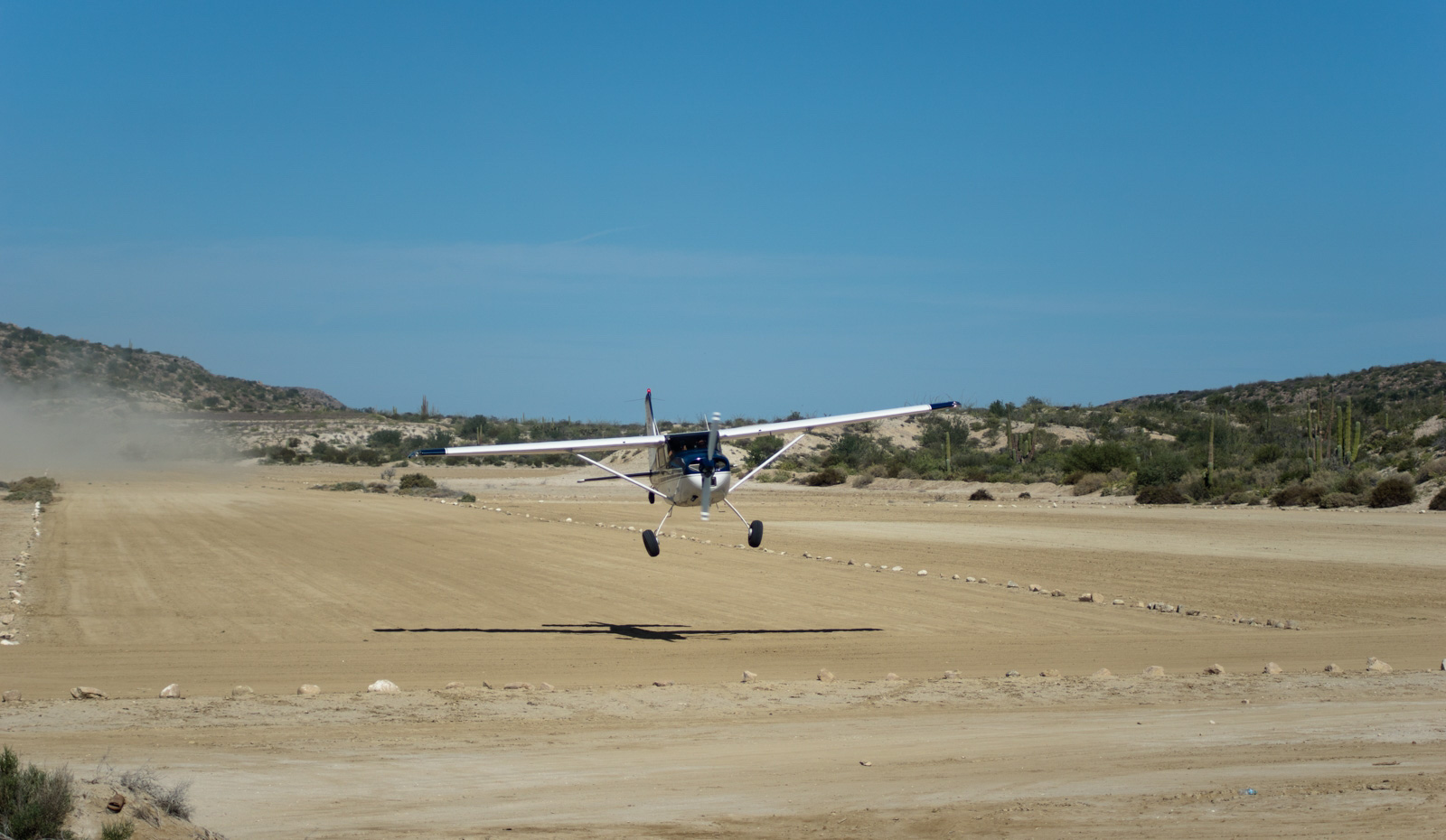 Leaving, on the other hand, was quite the debacle and would haunt us for weeks to come. We had no idea what Rosa was charging us for meals, which was probably our fault. She never said, and we never asked. We simply assumed it was normal Mexican prices. After peeling ourselves away from the beach and coming to grips with reality we packed up camp only to get slapped in the face! The bill was outrageous…$13 for fuckin huevos! For Pete’s sake we were charged for every damn coffee refill! At $1.50/cup we may well have been in L.A.! This is all for beach camping with no running water and a toilet we had to flush manually with bucket of sea water. Rosa 1: The Guys 0.

Defeated, we left, but didn’t make it too far. Somehow Mitch and Justin ended up bearing left at the fork leaving the beach rather than the right. It immediately seemed sandier than we had remembered. Had we gone soft while stationary for a few days? Or did it simply look different since we arrived under the setting sun? We continued onward never getting out of first gear. We’d throttle hard riding in bursts of 50-100 meters with our feet flailing around trying to remain balanced in the sand. We should have known this was wrong WAY before we reached the pipe to the local water well. Shit! Drenched in sweat we maneuvered the bikes around, or at least tried to. As Mitch was navigating El Tractor through the sand, she began to sink faster than a fat kid in a pool of pudding.

We were dead in the water. El Tractor was buried down to the frame and the chain popped off. Mitch and Justin dug deep freeing the tire and axle from the sand right as we heard the rumbling of an engine. Simone to the rescue, again! This time in a truck with Lionel. Sitting underneath the sweltering heat, dripping, we got the chain back on and the bike free. This was to be the start of Mitch’s clutch issues. Let’s just say we were not off to a great start and hadn’t even left the campsite. 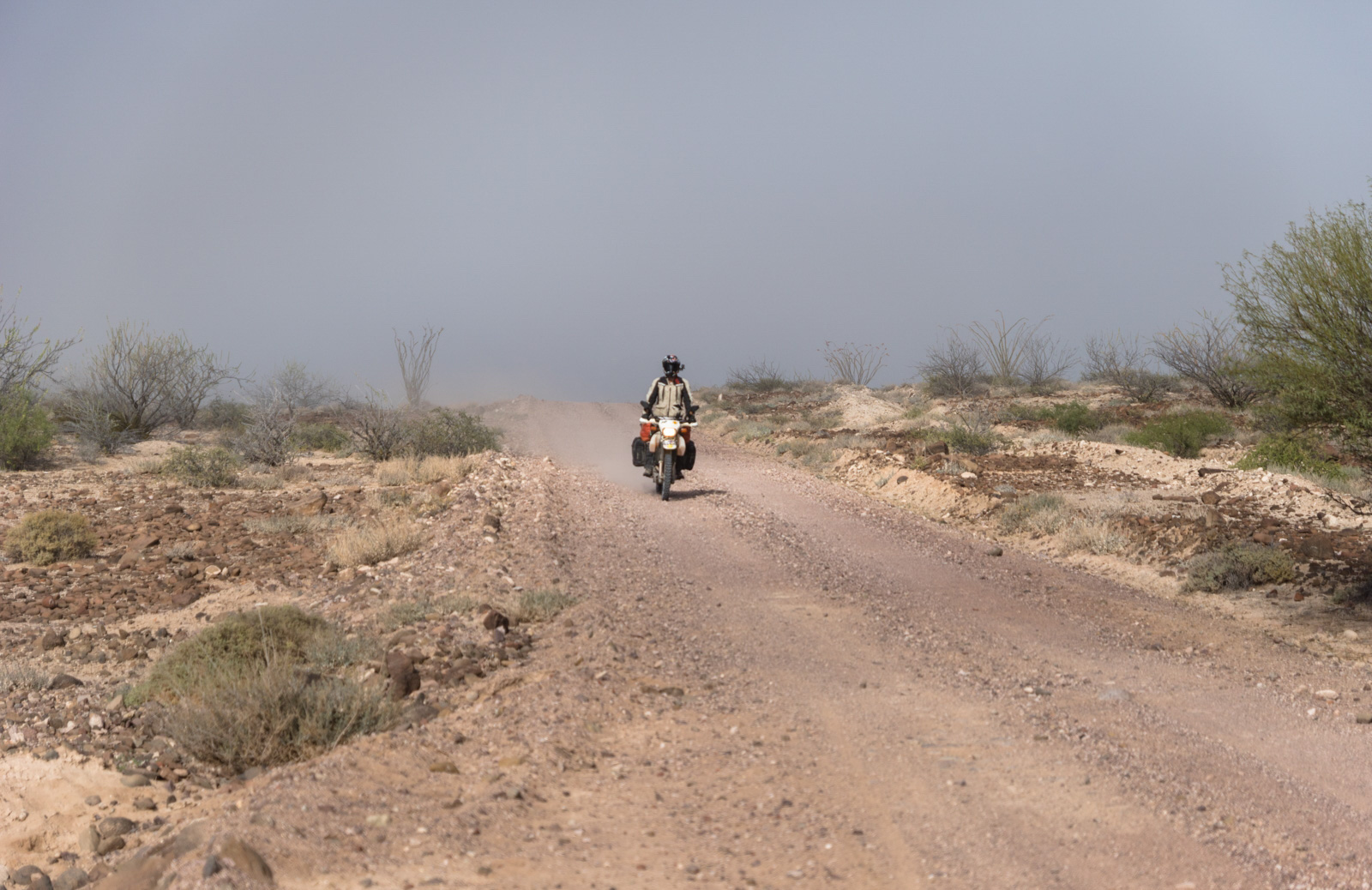 The ride out to El Arco wasn’t any easier than the ride in. More deep sand! Luckily it eventually broke loose to hard packed gravel for the remaining 50+ kilometers, and we could cover some ground. Exhausted, we yet again rolled into town right before sunset. It was a relief to reach the buttery smooth HWY 1 for the last 30 kilometers to Guerro Negro.

Continuing on south we eventually made it to the coveted jewel of Baja, Bahia Concepcion, where we’d spend a few days at the beach drinking margaritas and diving for clams. Stay tuned for Part 4.