Leaving Hausteca Posina was no easy task, but El Tractor was still sputtering at high speeds and needed a new clutch. Thankfully, the networking skills of the Team paid off and the Boy’s were able to successfully ship the parts from the US to a friend in Mexico City (Jorge, who they’d met in San Francisquito)…this saved a lot of time and money. Furthermore, Jorge set us up with a friend, Victor, who managed a hotel in a nice neighborhood in one of the World’s Largest Cities. Things appeared to be in perfect working order, all we had to do now was get the bike’s there…seems pretty simple, eh??

The drive into the colossal City was going smoothly until we were about 20 kilometers out. Things began to thicken like your grandma’s gravy on Thanksgiving. This was a different type of riding the Boy’s had never experienced before…6 lanes of traffic, moto’s buzzing, trucks merging, cars honking…all in the heat of the day. This was quickly turning into a nightmare! With a 60% working clutch, El Tractor tends to get a little sensitive in high traffic/high heat situations. Reaching exhaustion/complete shut-down, Mitch had to ensure that the RPM’s were high enough to avoid stalling but low enough to avoid running into the car in front of him. Trying to balance that and answer questions from the surrounding drivers…”De Donde Eres”,“Que tipo de moto es eso?” had Mitch on the verge of total mental breakdown! And on top of all of this, Mitch had to follow Justin who was weaving in and out of cars, driving on shoulders, and trying to follow the GPS…multi-tasking at its finest! Finally emerging from traffic and only a couple blocks from their destination, it started to rain/hail L. Mexico City welcomed us with a big fat middle finger…

That was until we met Victor, Jorge, and the Gang. The hospitality that we have received in Mexico has been unbelievable and this place was no exception. Victor welcomed us with open arms to his hotel/apartment, that just so happened to have an extra room specifically reserved for moto travelers.

The day after we arrived was Victor’s birthday celebration, Jorge was also going to meet us there with El Tractor’s innards…winner winner chicken dinner! Little did we know that we’d be accompanied by the owner of the restaurant, Octavio, 5 or 6 of Jorge/Victor’s good riding buddies and enough tequila to kill a small African village (and the Zika)…needless to say, we didn’t ride our moto’s home that night. 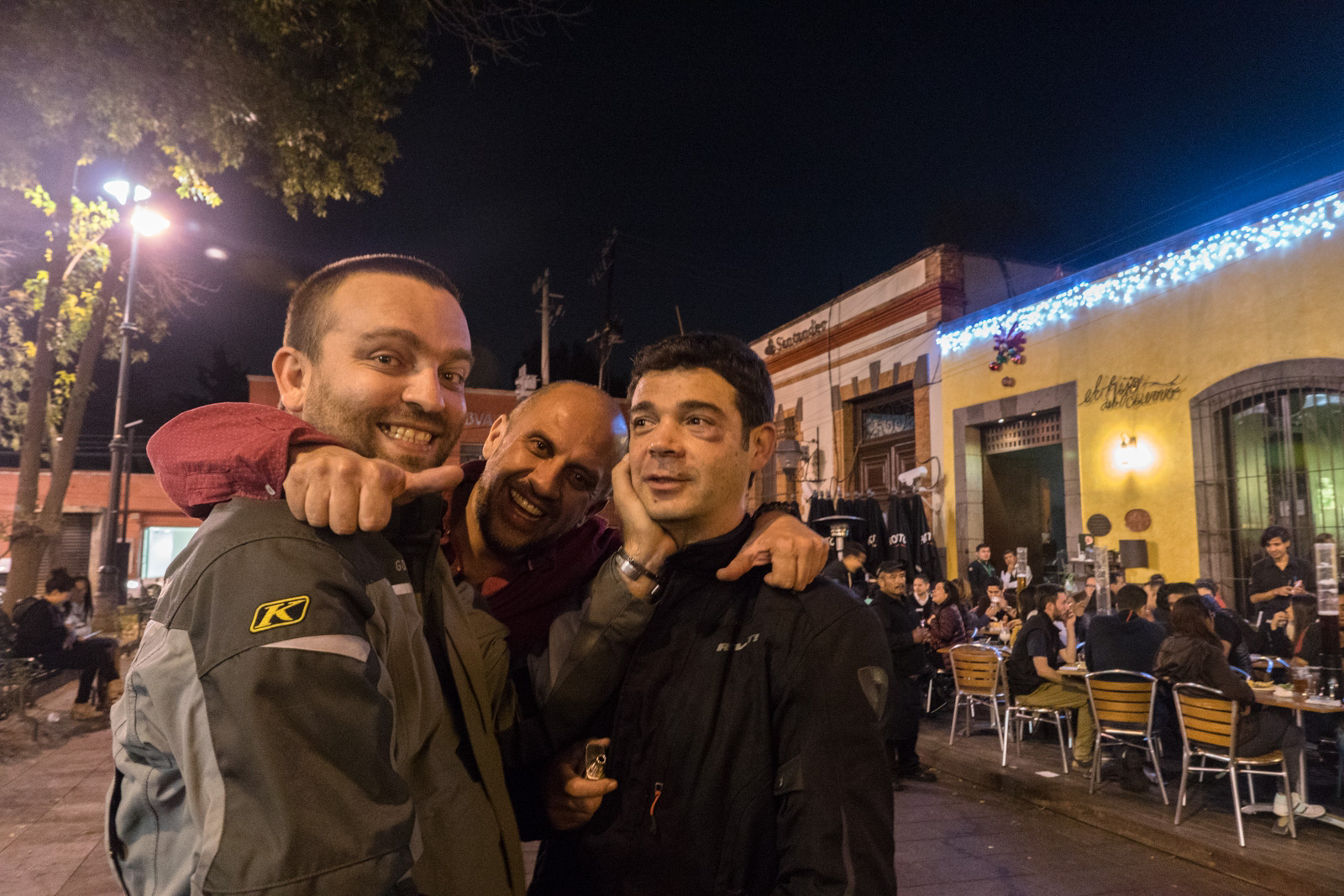 Next step was to get El Tractor off the bench and back onto the field (at full strength). Again, through our network we were connected with a mechanic and his trusted apprentice’s, Sergio and Joven. Replacing a clutch on KLR is quite simple, unless of course, the online retail giant sends you the WRONG FUCKING SPRINGS (litigation still pending)! Thankfully the original springs were still within spec and could continue to be used. 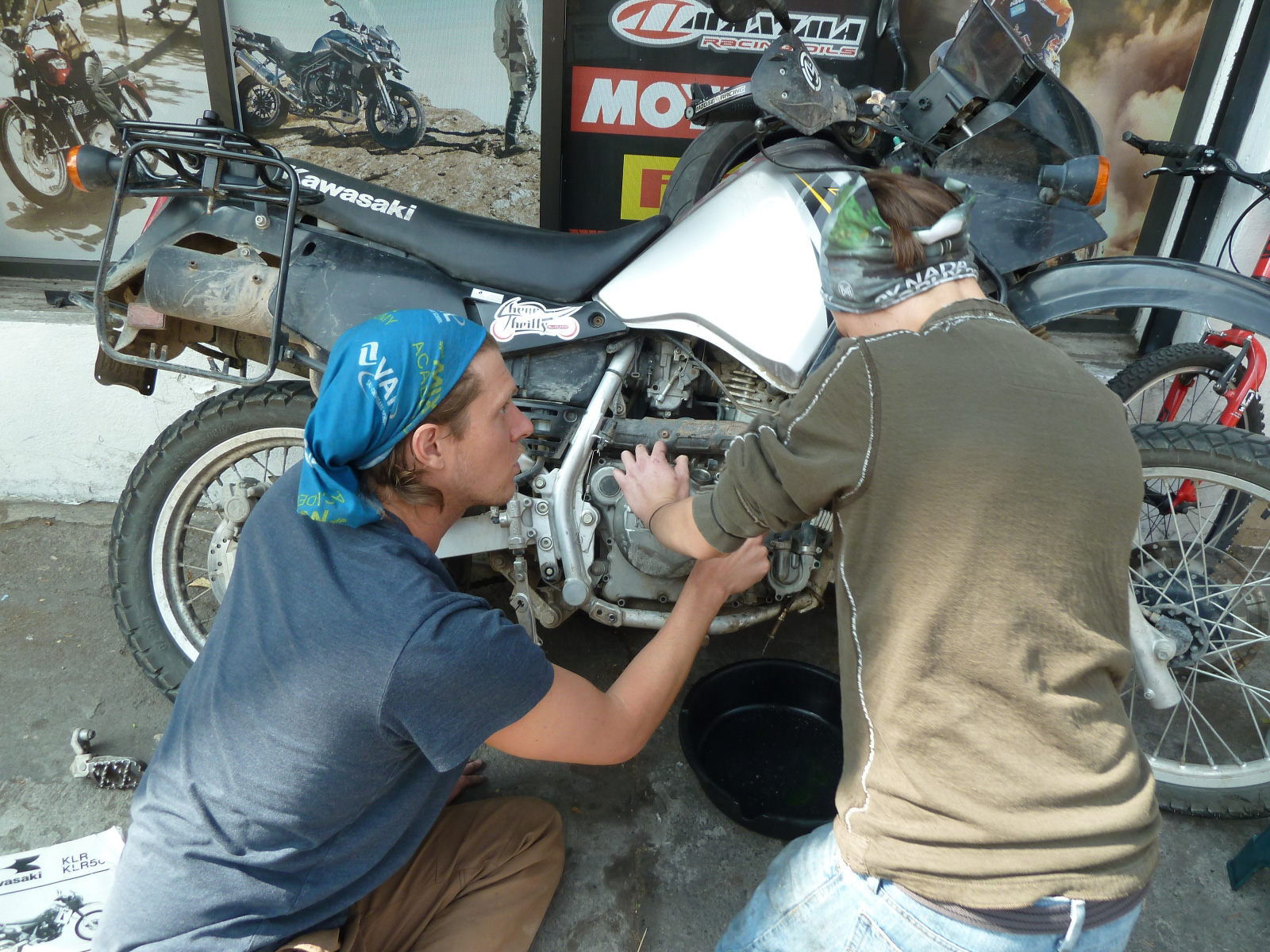 With the bikes ripping and roaring again, it was time to put our tourist hats back on and see what the area had to offer. We spent a day in the markets around the town square and are pretty sure that each and every one of the 22 million people in the City had decided to do the same. Leading up to Christmas, the market had more Mexicans than a Home Depot parking lot… 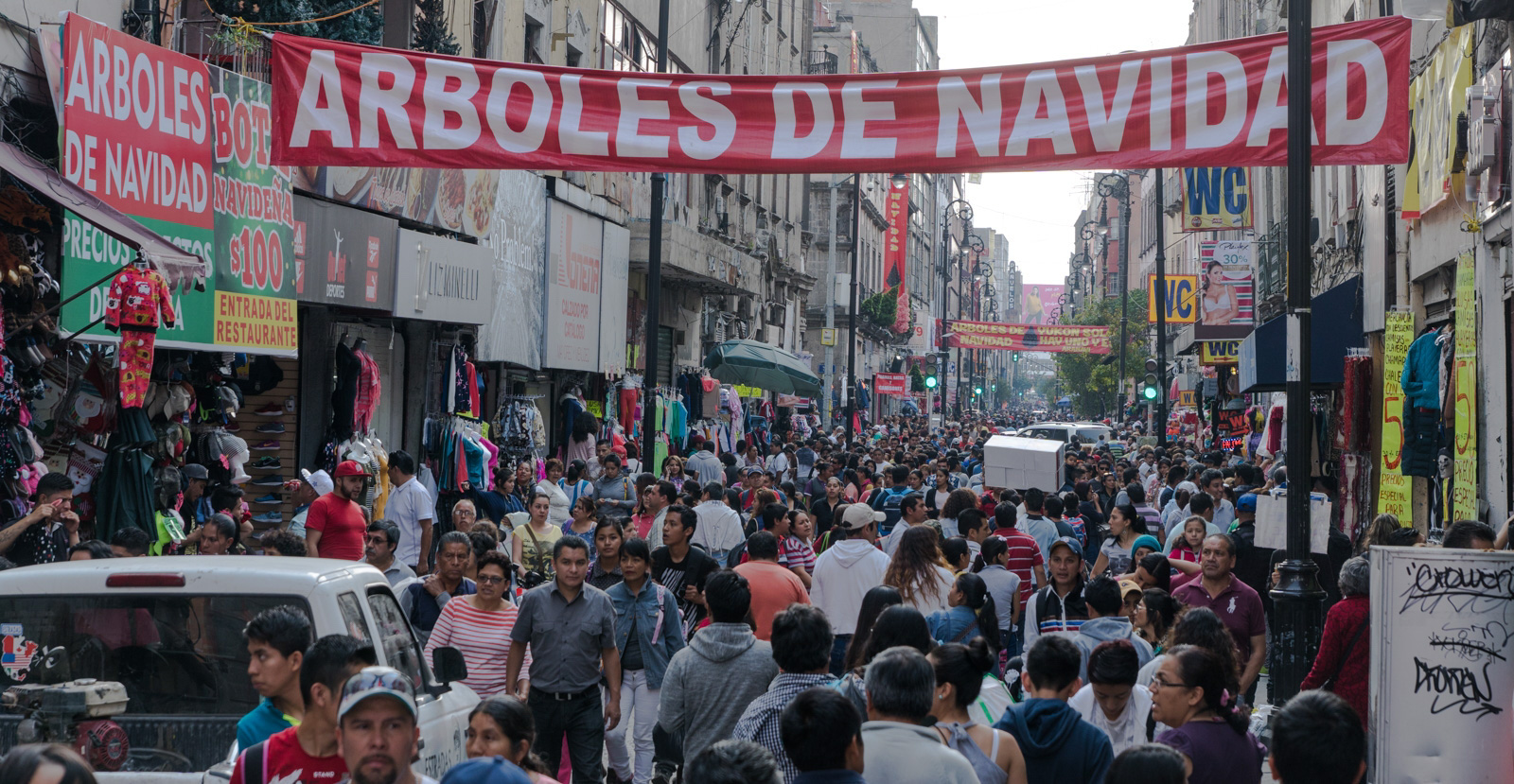 Next, we took the Bikes for a short ride out of the City to visit Teotihuacan. Sitting atop the Pyramid of the Moon watching life go by we couldn’t help but imagine what was going on in this city at its height. A bustling market, fires cooking, children running around. For now it remains up to our imagination. Words really can’t describe this place so here’s some photos. 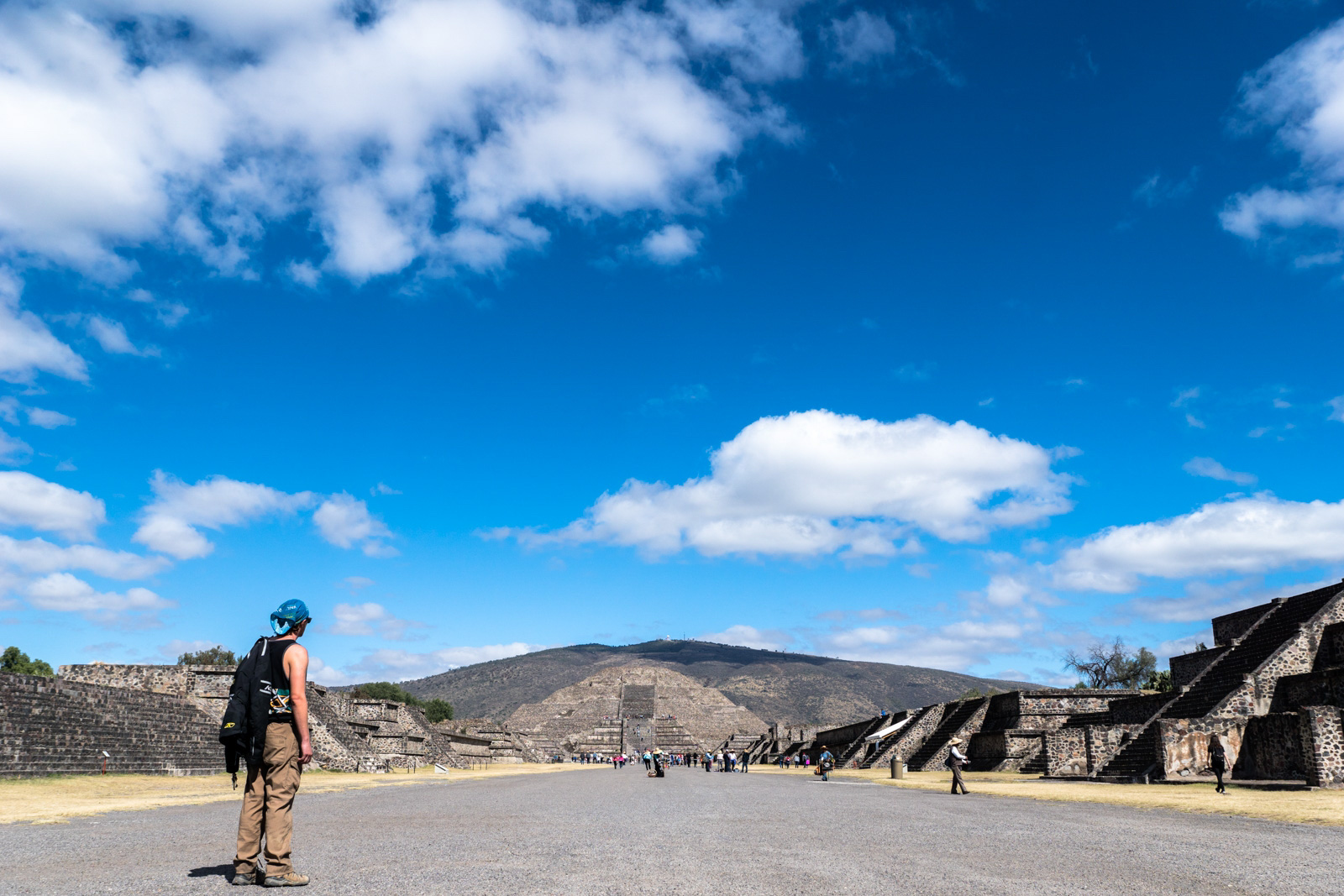 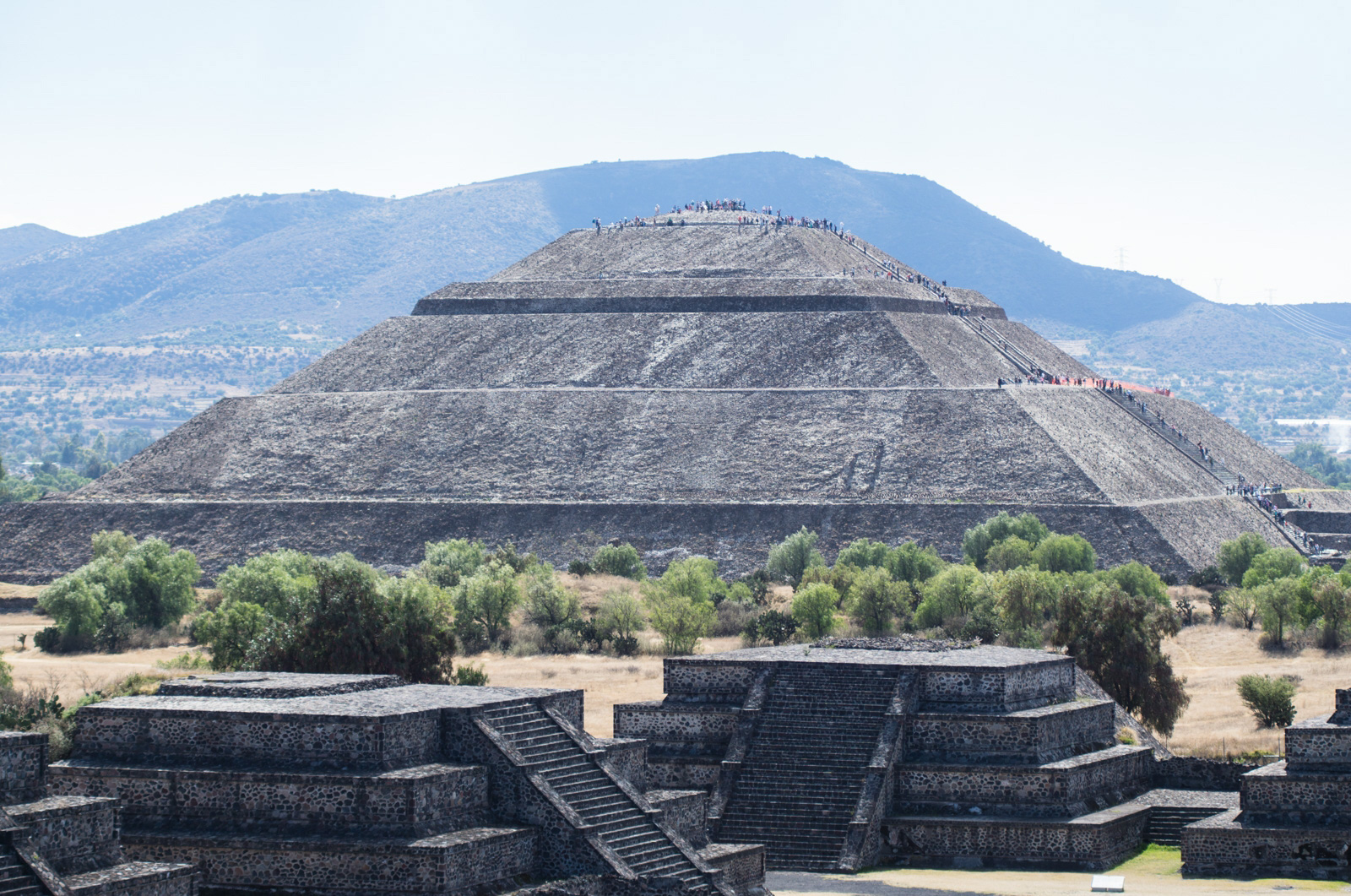 After a farewell dinner with Victor and Armando, it was time to head south, or so we thought. The bikes were loaded up and the Boys were ready to rock. Justin made it a whole 6 blocks before La Tortuga started acting like a bitch. At high RPMS she was bogging and stalling. Afraid to get on the highway, let alone into Mexico City traffic, the Guys headed directly back to the shop where Sergio was waiting. La Tortuga’s carburetor was immediately dismantled and received a deep clean and sensual massage. Re-assembled, off La Tortuga went for a test spin. Power like Justin’s hasn’t feel since Baja!! How long had the carburetor been clogged? Damn crappy Mexican gas.

Saying our second goodbye, off the Guy’s went through the mountains towards Oaxaca.