Costa Rica is a place of immense beauty, sure, but after months on the road our initial intentions were to breeze through it. We had spent too much time in Mexico and Central America and were running short on days to get to Panama for our boat to Colombia. Justin had been there five times previously for surf trips, and countless people kept telling us how expensive it was, how touristy it was, and how it wasn’t “true” Central America. We don’t disagree with any of those comments, but what we found in Costa Rica was more than good, it was great! If you were willing to get off the beaten track Costa Rica offered some of the best scenery and riding we had done in months. It rejuvenated our spirits, lifted us up, and made us excited to see what each day had in store for us. Something we had sort of lost over the last few weeks as things became mundane. It left us begging for more time and adventure, but first we had to overcome a potentially trip ending disaster… 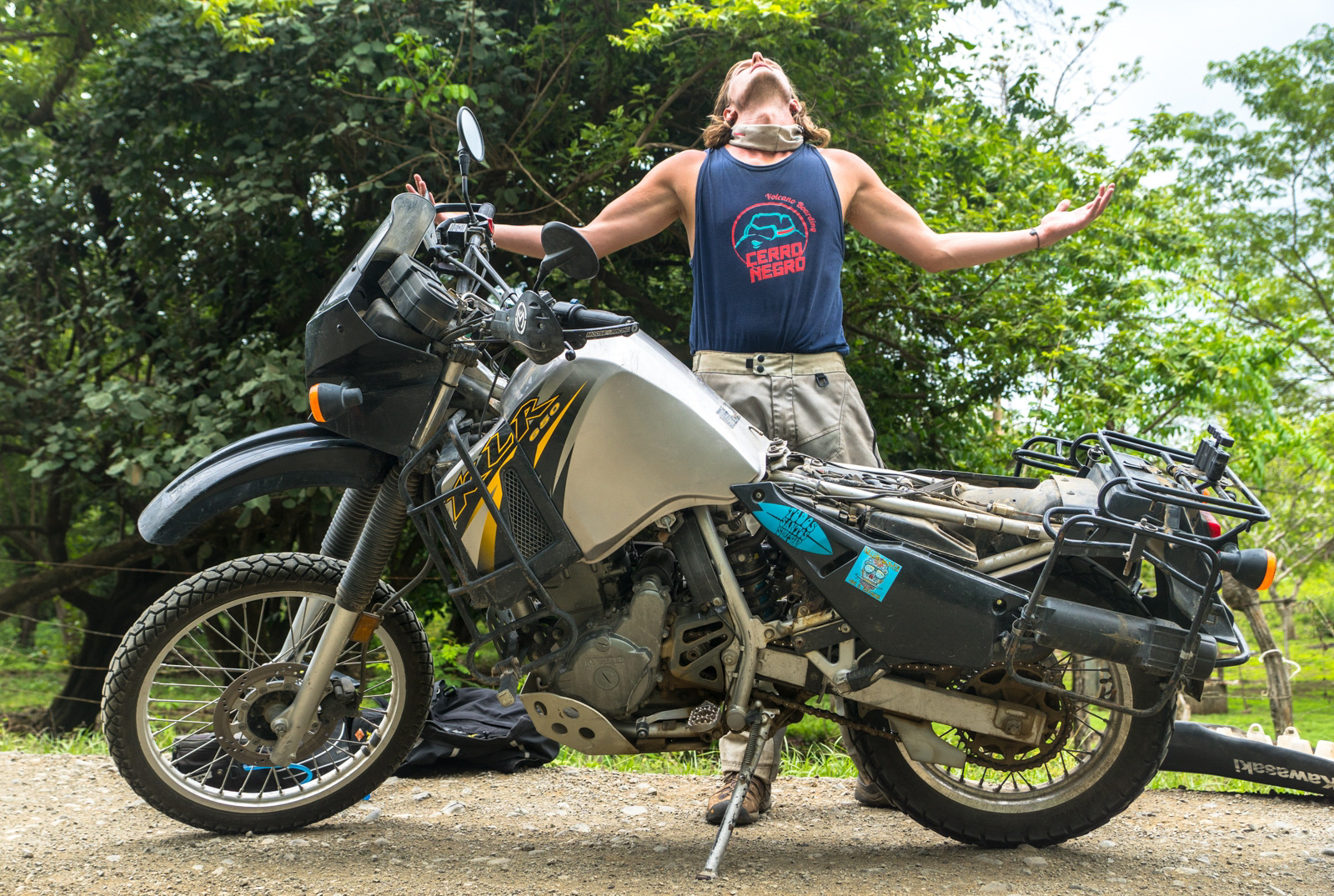 Trying to get off-the-beaten path we decided our first adventure into Costa Rica would be a drive around the Nicoya Peninsula. It was a long dirt road littered with empty beaches for camping and surfing. Having been pouring rain for days on end the road was muddy and full of intense washboards and even a few river crossings. Despite being soaked like a drowning rat we couldn’t help but grin ear-to-ear with every kilometer, bashing as many puddles as we could at full ramming speed! 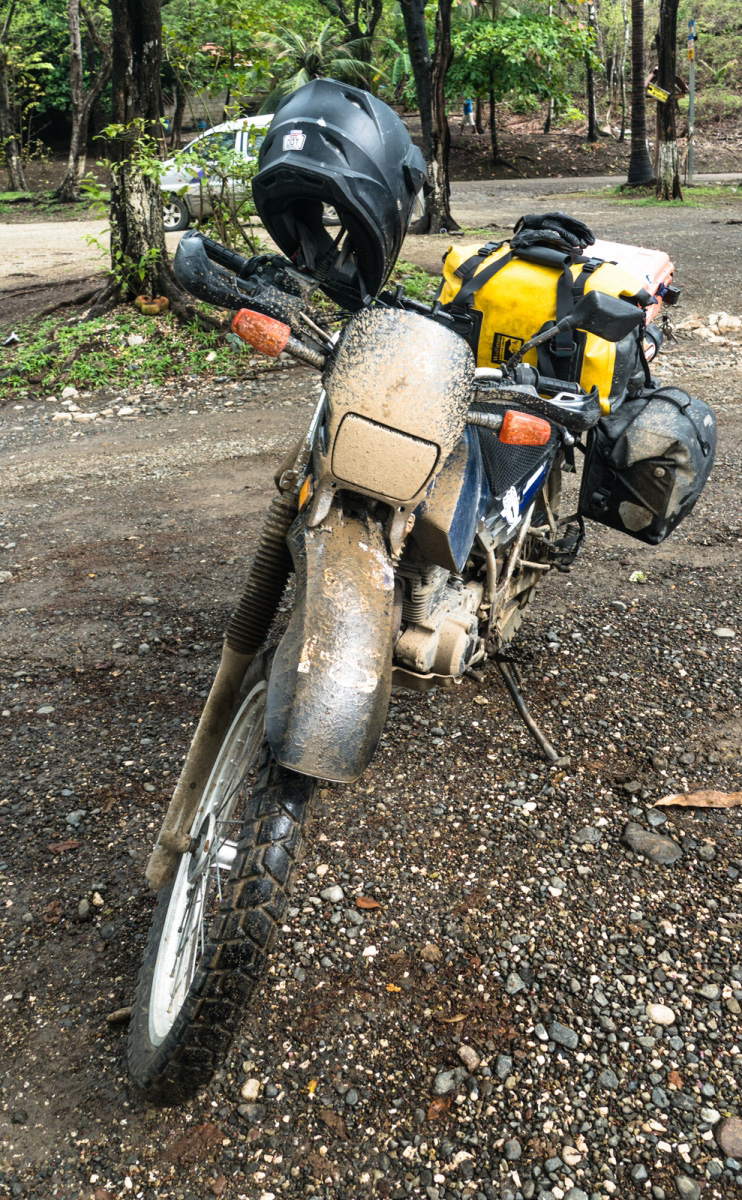 We rounded the corner past Marbella on a particularly rough section littered with potholes that could easily engulf a small child. Mitch was leading and heading down hill at an alarming rate. From Justin’s vantage he seemed oddly uncontrollable, bouncing, and not being able to steer properly playing chicken, head on, with a cargo truck. Mitch gained control of El Tractor, speaking sweet nothings into her ear calming her to a stop.

“Dude, what the FUCK happened? That was a close one.”, said Justin as he pulled up. The look on Mitch’s face was a combination between sheer terror and confusion. “I was driving and all of a sudden I fell backwards 6 inches, and had zero control. Fuckkk! I thought for sure I was going to run head on into that truck.”

Dismounting the bike the Guys began examining the bike. El Tractor’s fat ass was sitting unusually low, like she had eaten to many Pupusas in El Salvador. Poor girl needs to go on Weight-Watchers. We could lift then back end up with a swing of about 6-8 inches, but the rear suspension appeared normal. After removing the seat there appeared to be two welds completely busted! We were definitely immobile. 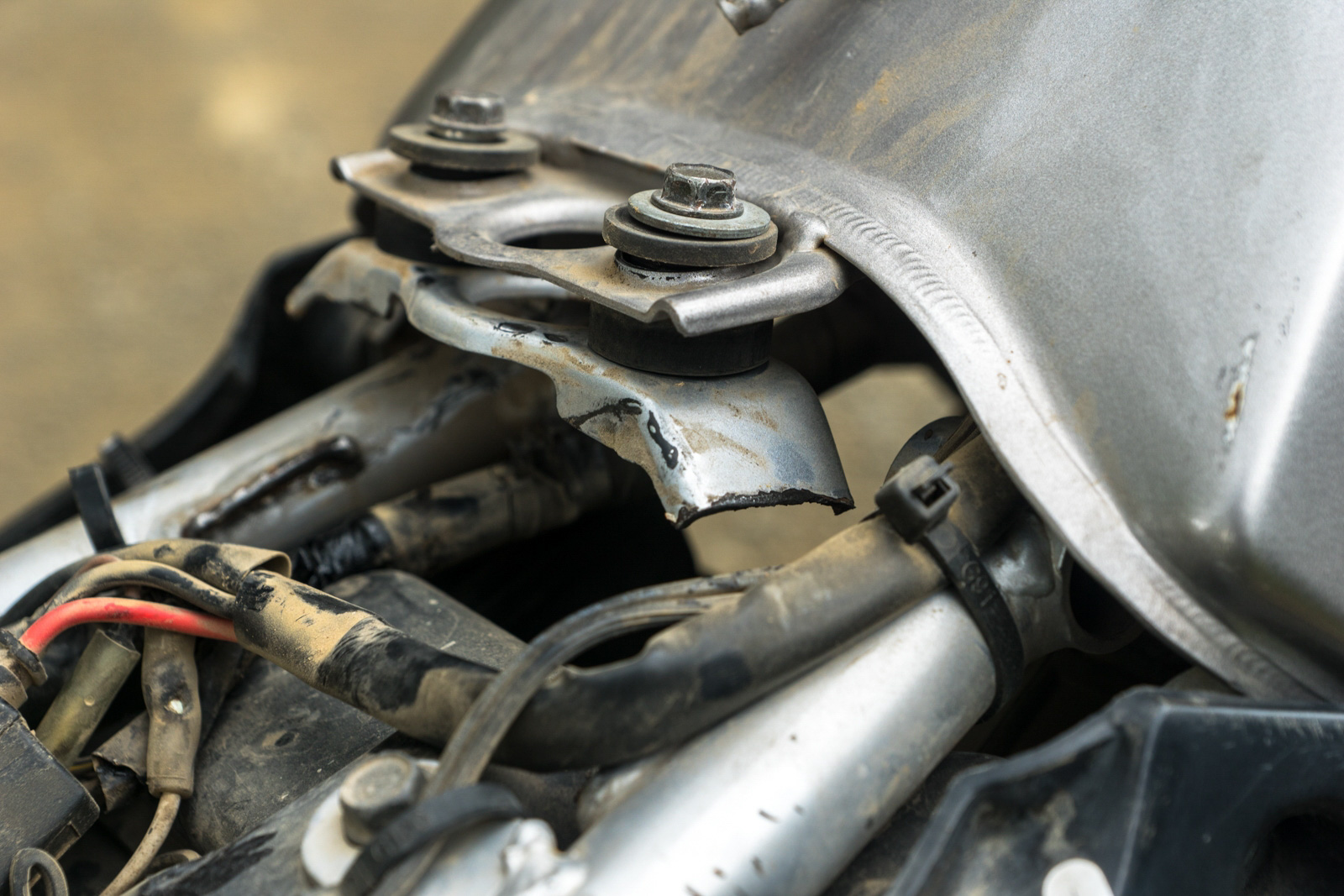 Justin headed into town to try and find a truck, but the only mechanic in Marbella was gone till the evening. In the meantime, Mitch had already secured a ride and was on his way! Before heading into town El Tractor was rolled into the nearest neighbors living room for an evening of Telenovelas (Spanish soap operas) and Gallo Pinto. With internet, and a few beers, the Guys had realized what happened. The bolts connecting the frame and subframe had sheared completely off separating the frame, apparently, a common issue with KLR 650s.

While this sounds terrible, it actually ended up being a quick and easy fix. The following morning we hoisted El Tractor into the back of a pickup and got her to the mechanic. Within 30 minutes we were back on the road with two new bolts and a few additional weld jobs. Lesson learn, read about common pitfalls of your bike and upgrade your bolts!! 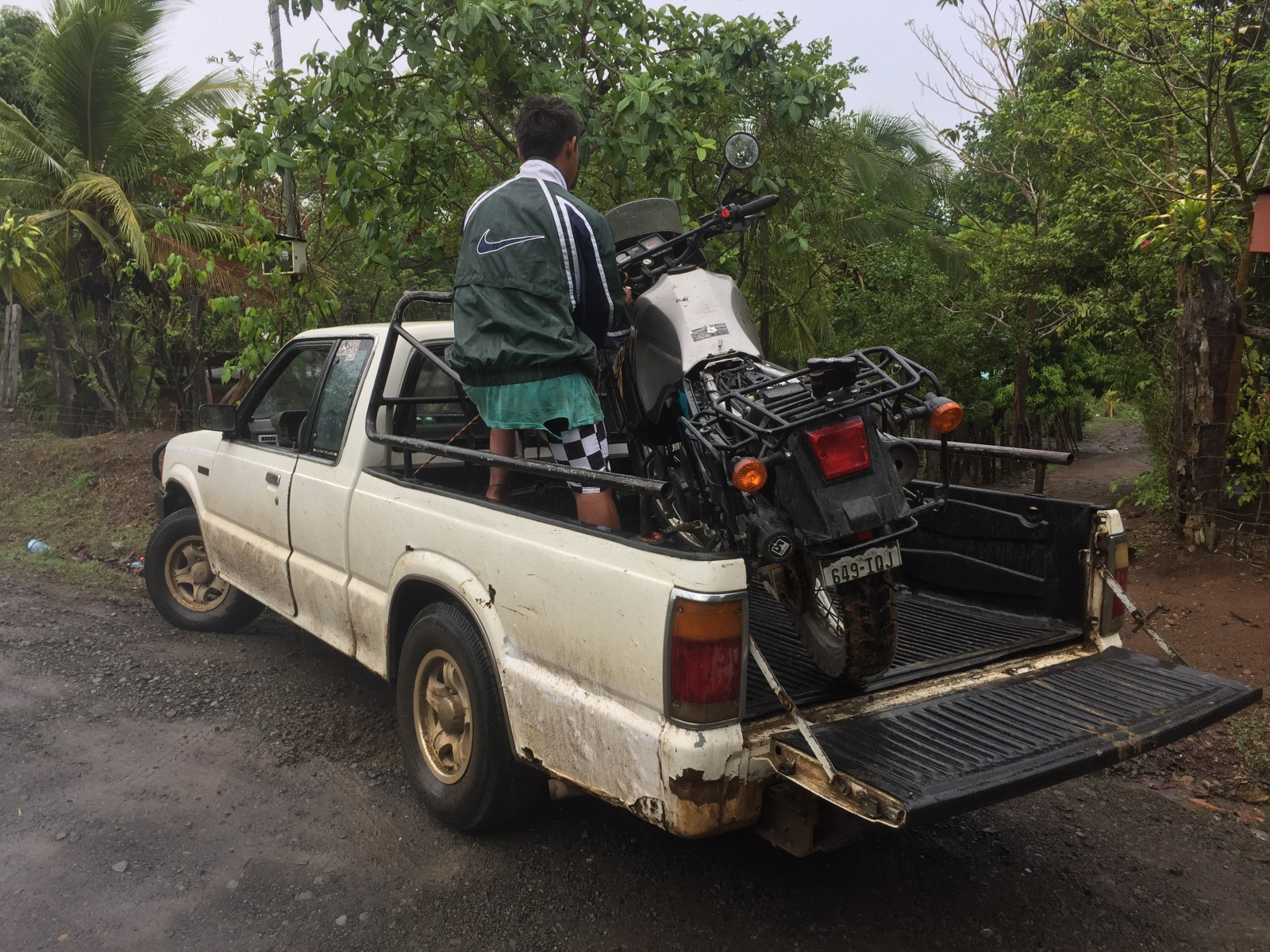 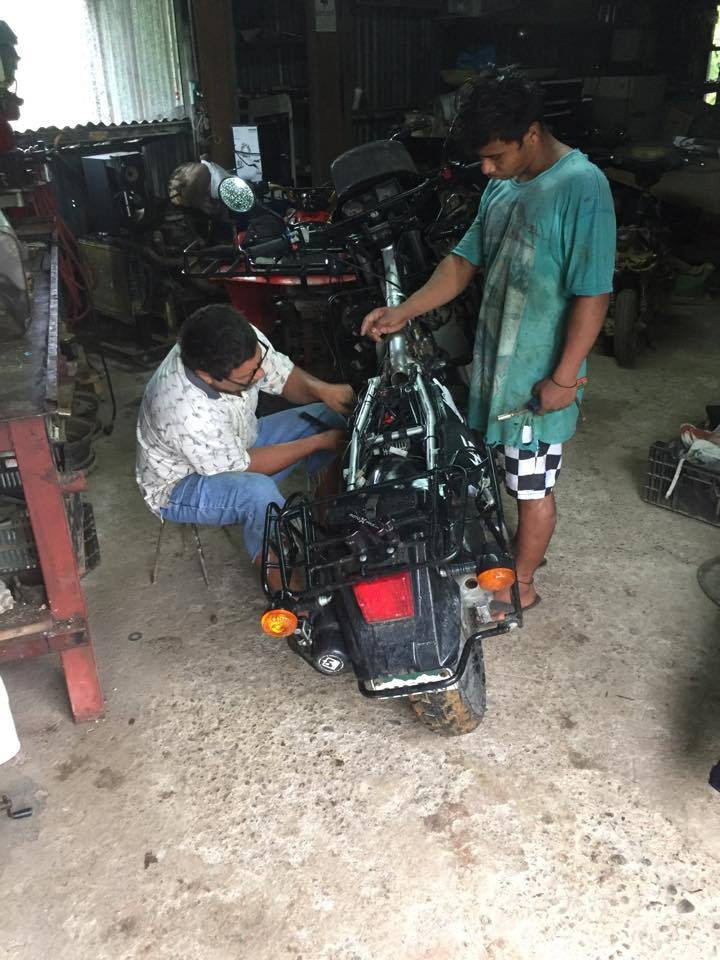 We continued along the Nicoya Peninsula for a few more days, but after continuing to get rained on and Justin’s foot still not allowing him to surf, we decided to head up into the mountains of Monteverde and La Fortuna. Again, the roads were completely shit, and we were soaked, but we couldn’t stop. This was the best scenery and driving we’d done in months. Every turn lead to new stunning vistas, lush green forests…and more potholes of course. It was unreal, and incredibly beautiful! We ziplined through the rainforest, Macaws and all, and graciously were hosted by local Ticos we met in Nicaragua who showed us all around La Fortuna from their perspective. 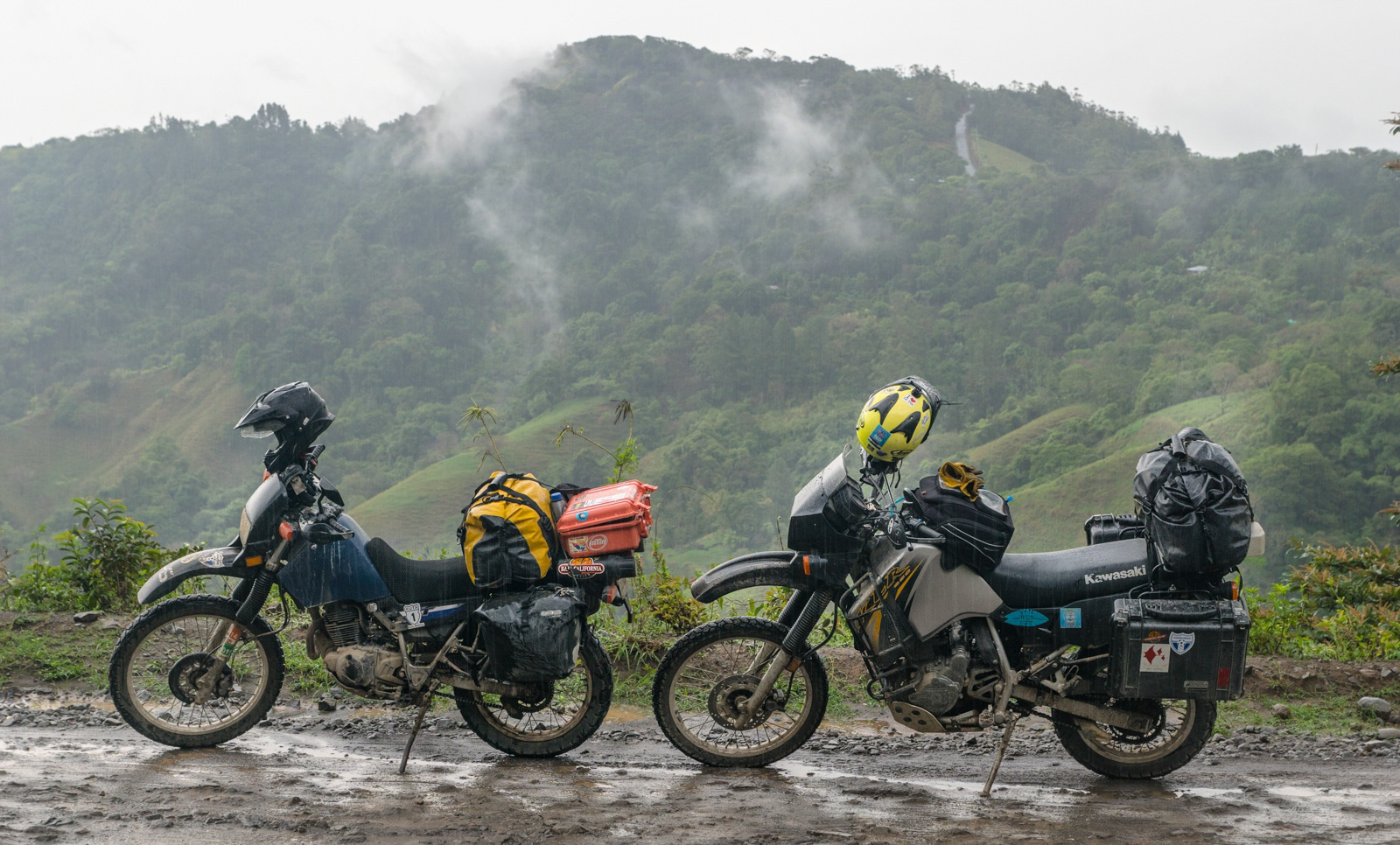 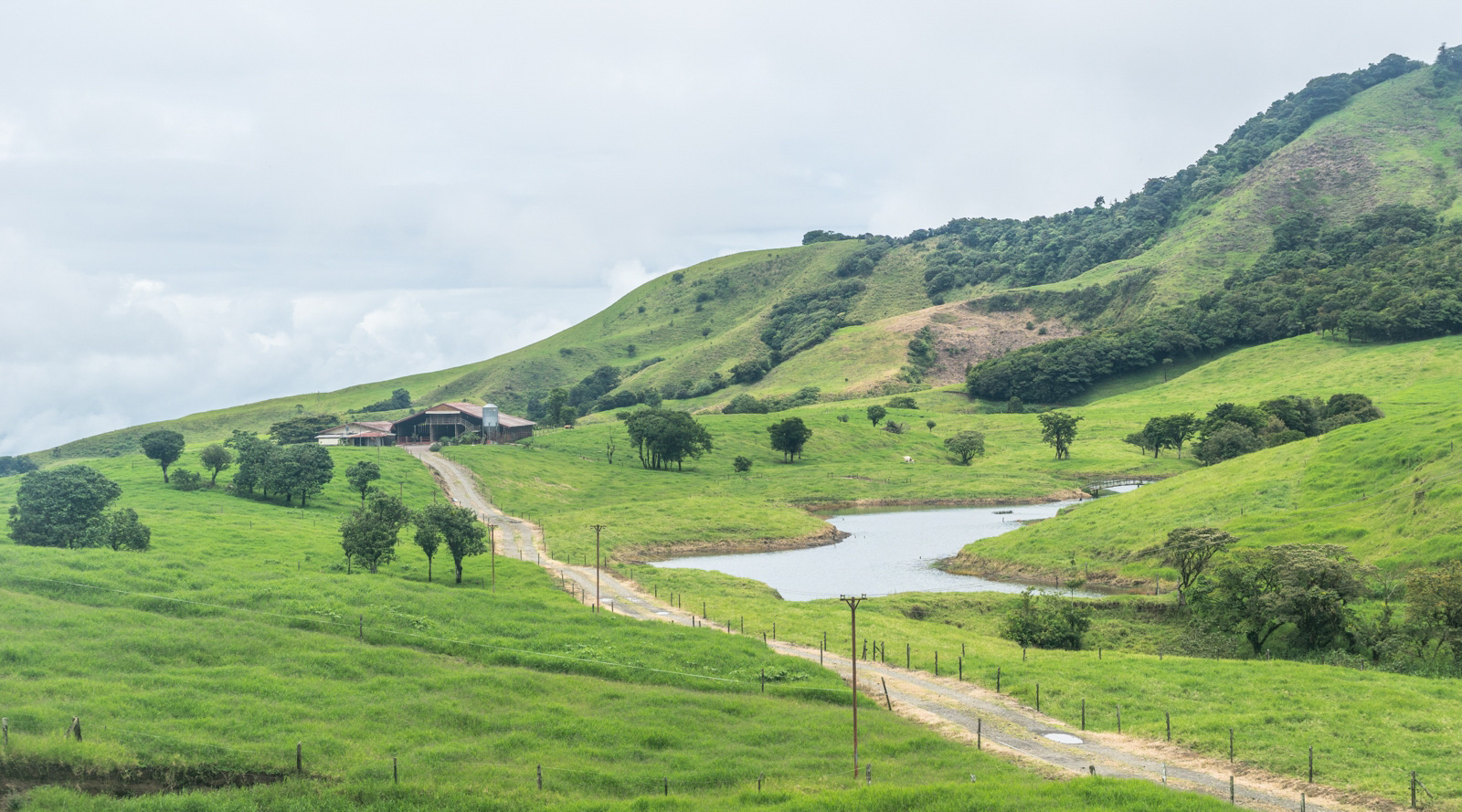 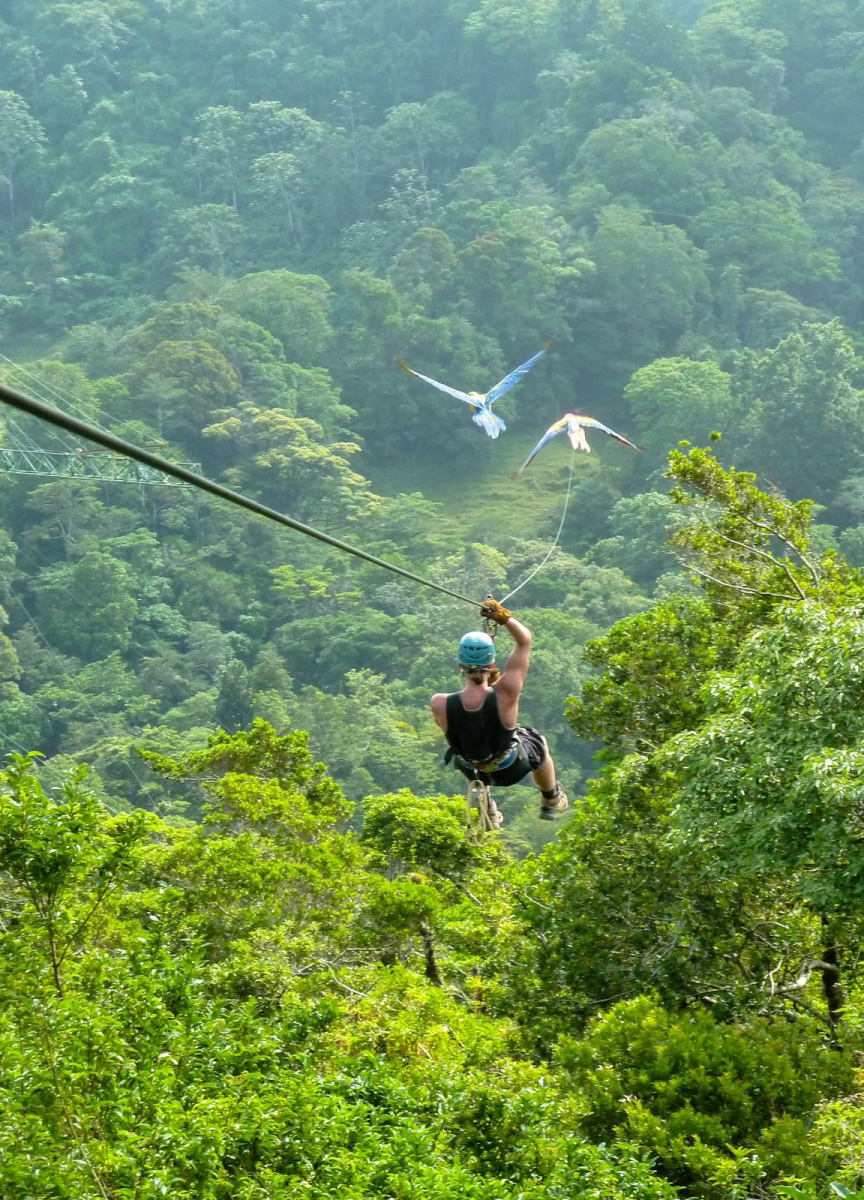 Now even shorter on time you’d think we’d continue southbound, but that would have made too much sense. Antonia had been in San Jose with friends devising a plan to do some remote backcountry hiking in north Costa Rica, so back up towards the Nicaraguan border we went. What started off as a weekend of frustrations, constantly being rained on and waiting for others, ended up being one of the most incredible hikes we’d done in our trip.

The Guys left Liberia before sunrise heading towards the GPS coordinates Hunter provided. After driving dirt roads through windfarms, and towering volcanos covered in morning mist, for over 1.5 hour we were about to call it quits. “Where the fuck were these guys?” Exhausted from the previous days, we were in no mood for this bullshit. Just when we were about to call it quits Hunter and the rest of the guys from San Jose came around the corner in a pickup. It was game on!

This wasn’t an ordinary hike. The volcano we wanted to summit, Rincon de la Vieja, was actually closed due to being too active, but with good connections, local knowledge, and a GPS we spent almost 12 hours bushwacking our way through the jungle hiking over 18 kilometers through tropical rainforest, hardened lava flow, and a volcanic crater all by the use of machete! 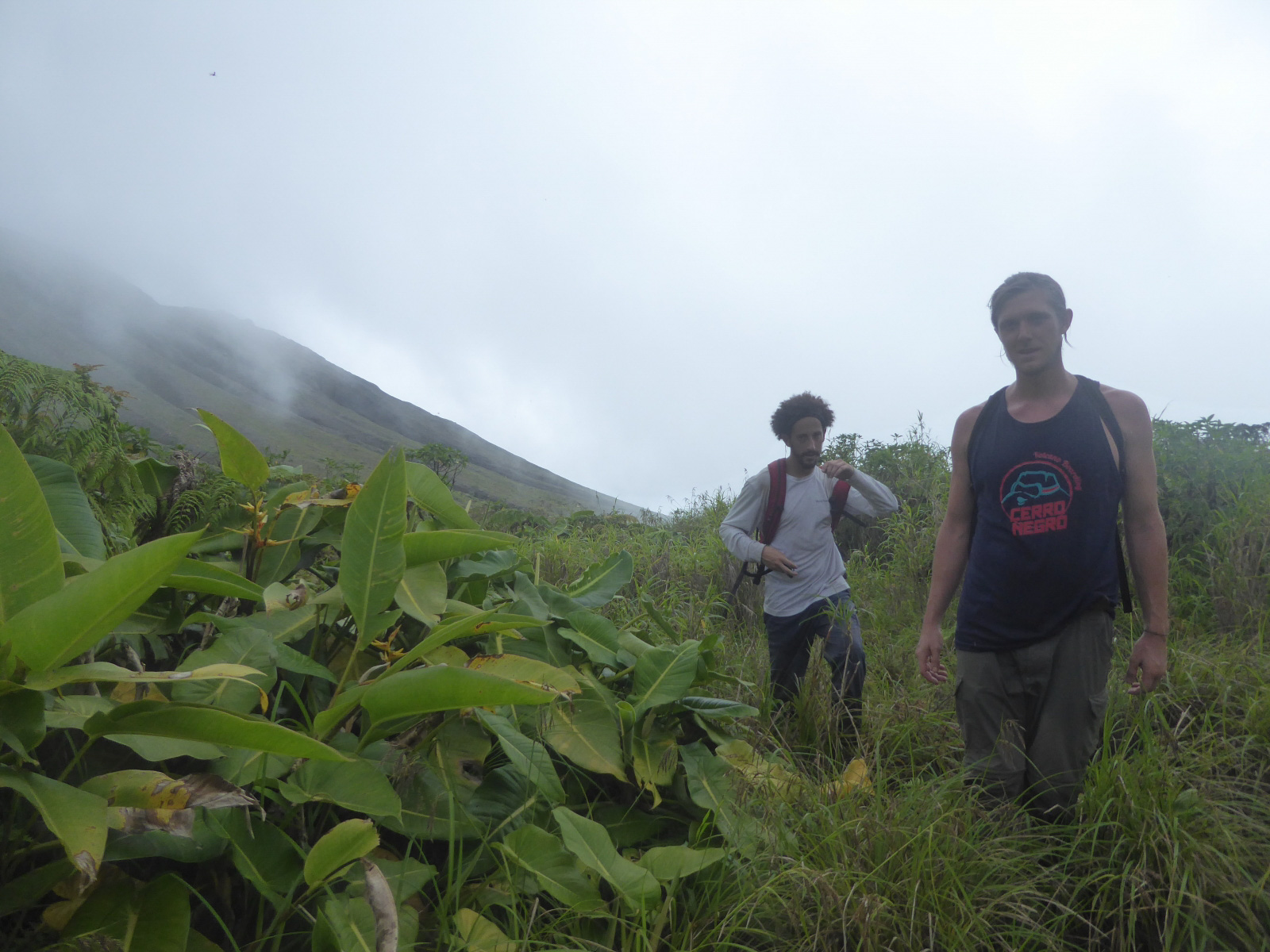 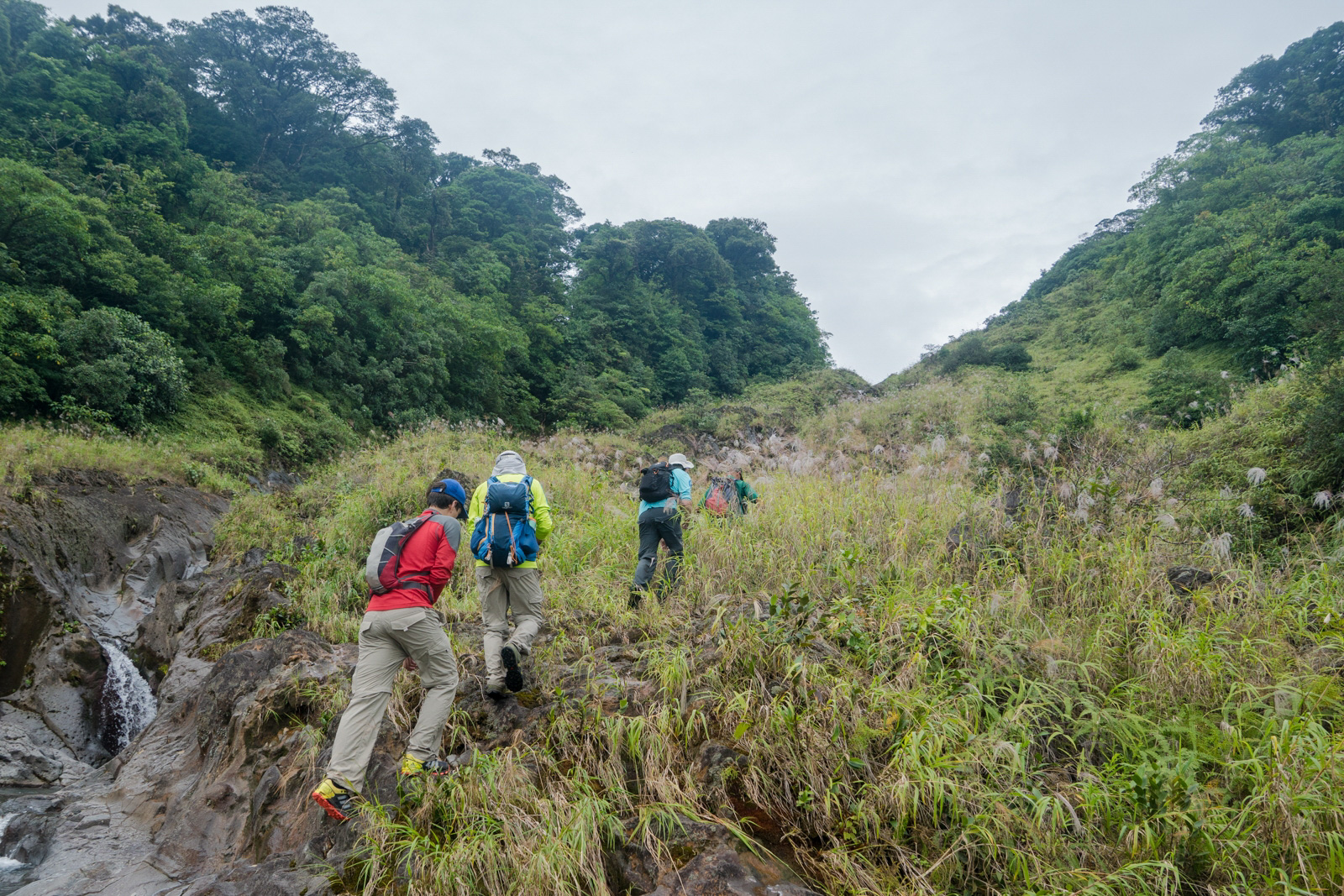 What we reached at the end of the journey was an old dormant volcanic crater thriving with vegetation and a lake. Soaring above, in a striking contrast, was the active volcanic crater of Rincon de la Vieja filled with greyish bubbling sulfur water. Being able to see the two craters in their varying stages of life and evolution was remarkable. 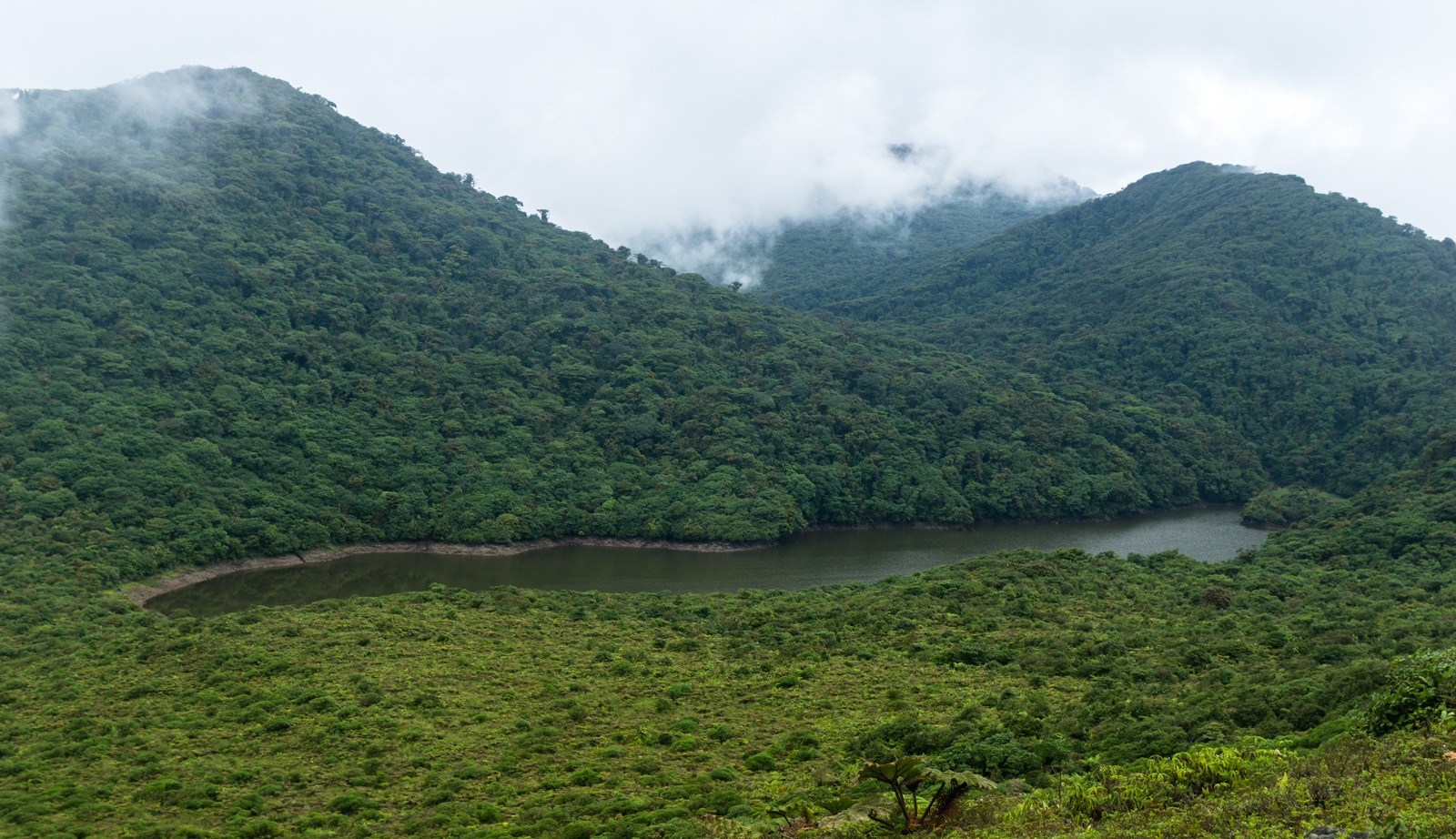 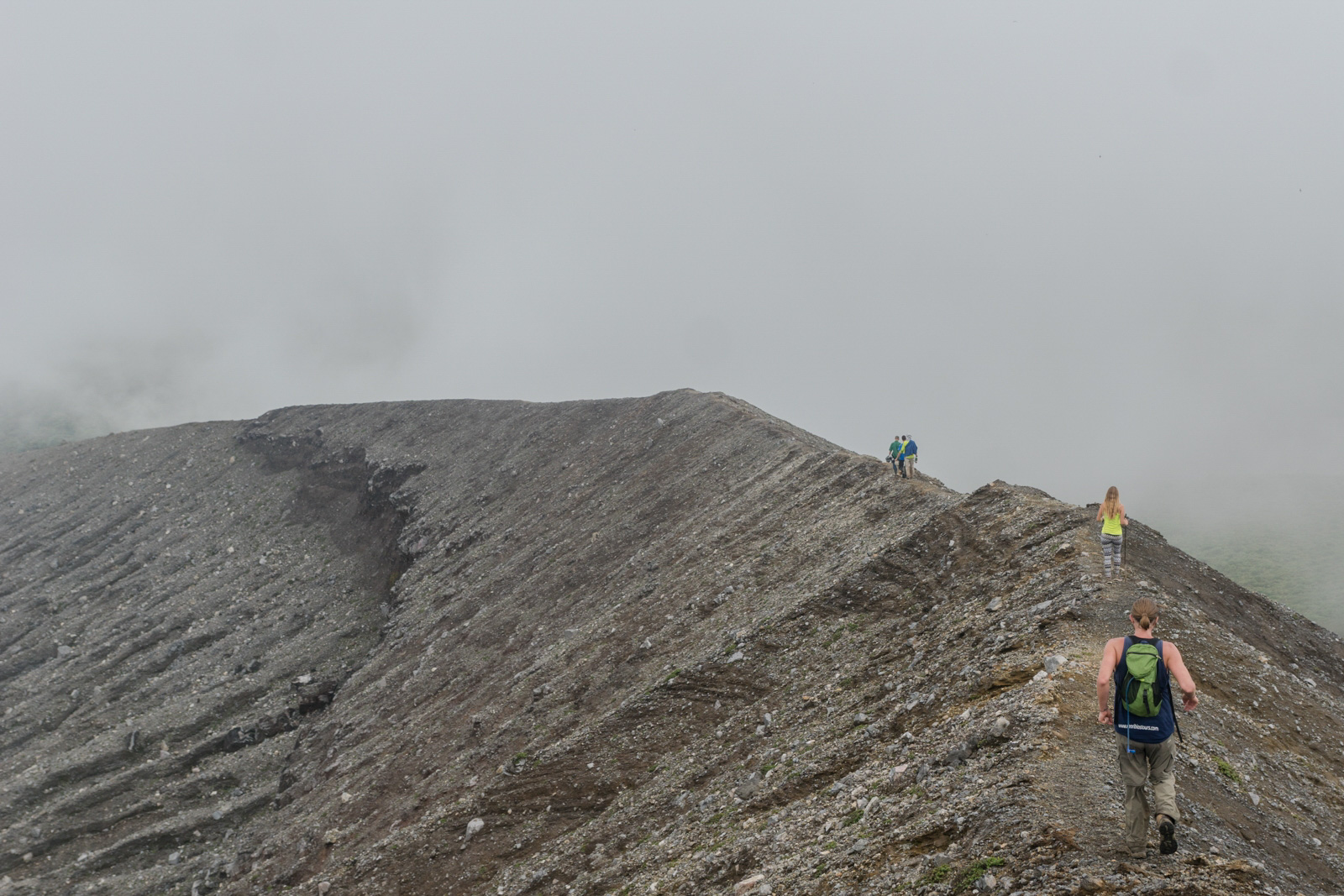 Muscles aching, and feeling slightly dehydrated we moved slowly the next morning. How could we top that? A lot of volcanoes have been hiked on this journey, but nothing quite unusual as this. Little did we truly understand how active it really was. About two weeks after our hike we saw on the news that it actually erupted! We’ve skirted death once again.

Powering south we hammered straight down the Panamerican towards the beach. The rain finally stopped and we had days of mostly sunshine. Justin got a few days of great surf in at Dominical and we all headed to Uvita to dive Isla del Cano, the poor man’s Coco Islands. 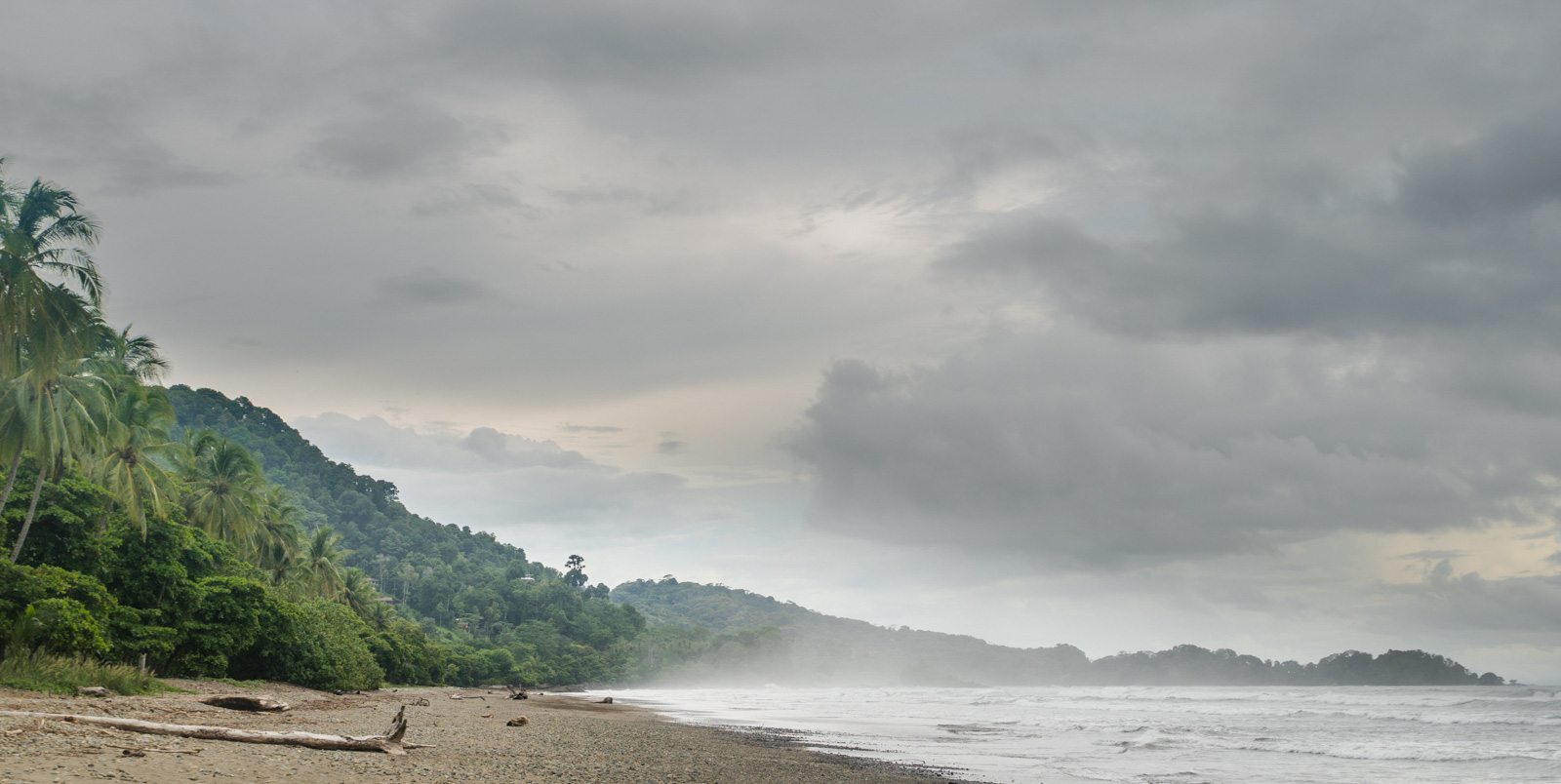 Now we had heard great things, but what we saw this day will live in our minds forever. The entire team at Costa Rica Dive & Surf was unbelievable and organized. The national park was beautiful and well restricted only allowing 100 dive permits per day. We saw a dozen or more white-tip reef sharks, schools of grunts in the thousands all googly-eyed staring at us as we swam through them, and two Manta Rays, that gracefully swam with us for over 15 minutes. We swam underneath and in circles around them mimicking their flow and movement. It was pure elegance!

Costa Rica’s beauty was absurd and there is a reason why this place has become such a land of adventure and tourism. We just didn’t want to leave and had pushed our time as far as we could. We had over 500+ miles to cover in two days. Mitch’s parents were in route to Panama City with a bag full of goodies!