With only the bottom fifth of Colombia remaining there was still some adventures to be had in our favorite country. That is if Mitch’s bike (or heart) could handle another spontaneous combustion! Despite our explosive arrival, Popayan brought us some good fortune, and by good fortune we mean GOOD FOOD! From there it was VERY important that we head back north to Cali to experience the so called “Salsa Capital of the World”, the Pacifico Petronio Music Festival, and of course Kyle’s 30th birthday (like we needed an excuse to drink) before heading south to the border through Trampolin de la Muerte. Leaving Colombia might just SHATTER us…this place (and people) have been so good to us – leaving us with not only incredible memories but a connection with a place like none other!

After the KLR narrowly escaped blowing up in the driveway we clearly had some work to do to get it back on it’s feet. The following day was strictly dedicated to motorcycle re-wiring. We peeled back the layers of the Ol’ Girl and determined that the short came from the heated handle grips that Mitch had recently re-wired for a second time in Medellin. Mitch is clearly a better accountant than electrician! So, instead of trying to fix the problem the Boys concluded to strip the KLR down to the basics to avoid another disaster (which was clearly inevitable given our current track record). 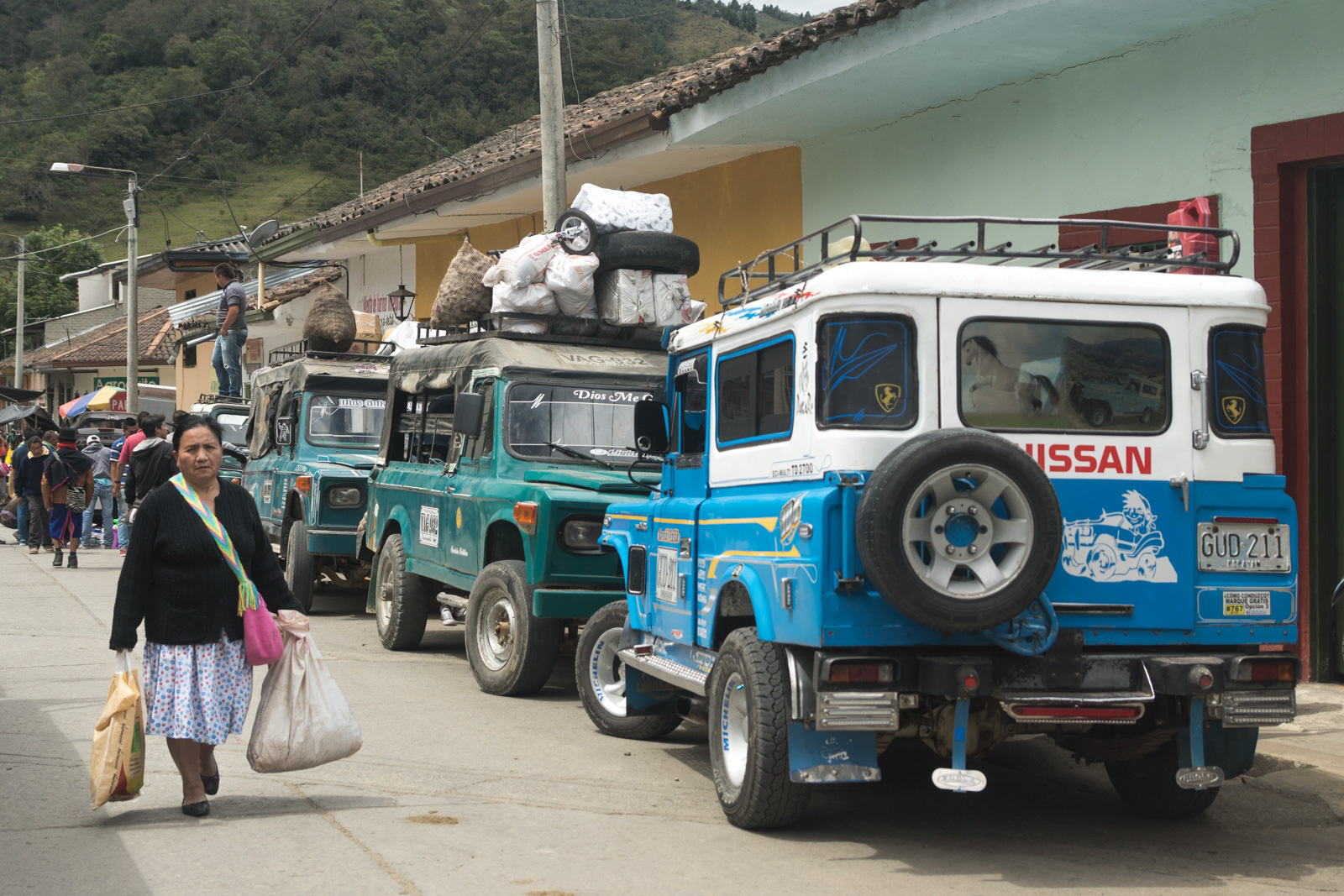 Anyway, enough of these bike problems, it’s depressing just thinking about these dark (but hilarious) days. Popayan was a beautiful, Spanish Colonial town. Nearly all the buildings were painted white and it was a beautiful city to walk around…unless you’re getting shook down by the fuzz (police). Mitch went into the ATM to get cash for empanaditas, and before he could get his money out he turned around to see Justin getting a full body search by the local police…WTF?! With his black and white (very cholo looking) flannel and backwards hat they must have thought he was waiting for this unsuspecting blond hair, blue eyed Gringo to step out of the ATM, pockets full of pesos. Either that or they thought he was hustling some of the local commodity (just going to leave it at that). The police insisted he get against the wall and “spread it”, but he refused the first few times until he realized they were actually being serious…whoops!

Well the joke was on them…as soon as they realized he was from the States everyone had a good laugh! Who knew Colombians racially profiled their own citizens?! Justin’s tan complexion didn’t do him any favors here. Now that the Team had some cash (and weren’t going to jail) it was time to find some local eats. We were recommended a place just a couple blocks from our hostel, MoraCastilla, and this QUITE POSSIBLY could have been the best recommendation that we’d received the entire trip! It was all small-plates, so we basically ordered everything…empanaditas with a peanut sauce, salpicon payane, tamales, etc. The entire menu was amazing and was a great change of pace from the platos del dia we’d been eating for the past 2+ months. 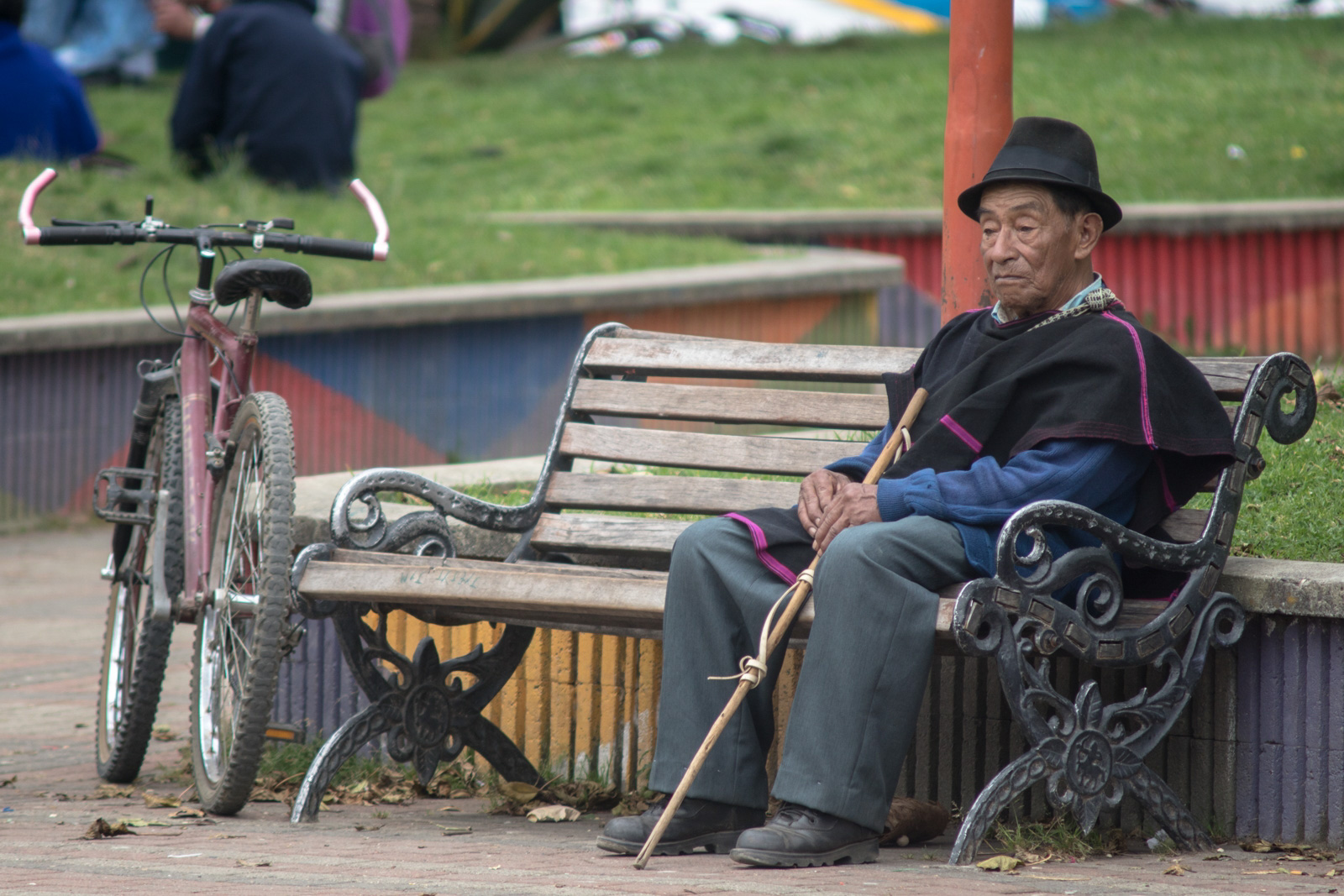 Now that we’d taken care of eating as many empanaditas as one man could possibly handle it was time to make moves and see the countryside. We took a couple day trips from Popayan 1) the hot springs and 2) Silvia which was known for it’s Tuesday market and indigenous feel. The market was incredible. Who knew there was so many damn different types of potatoes!! 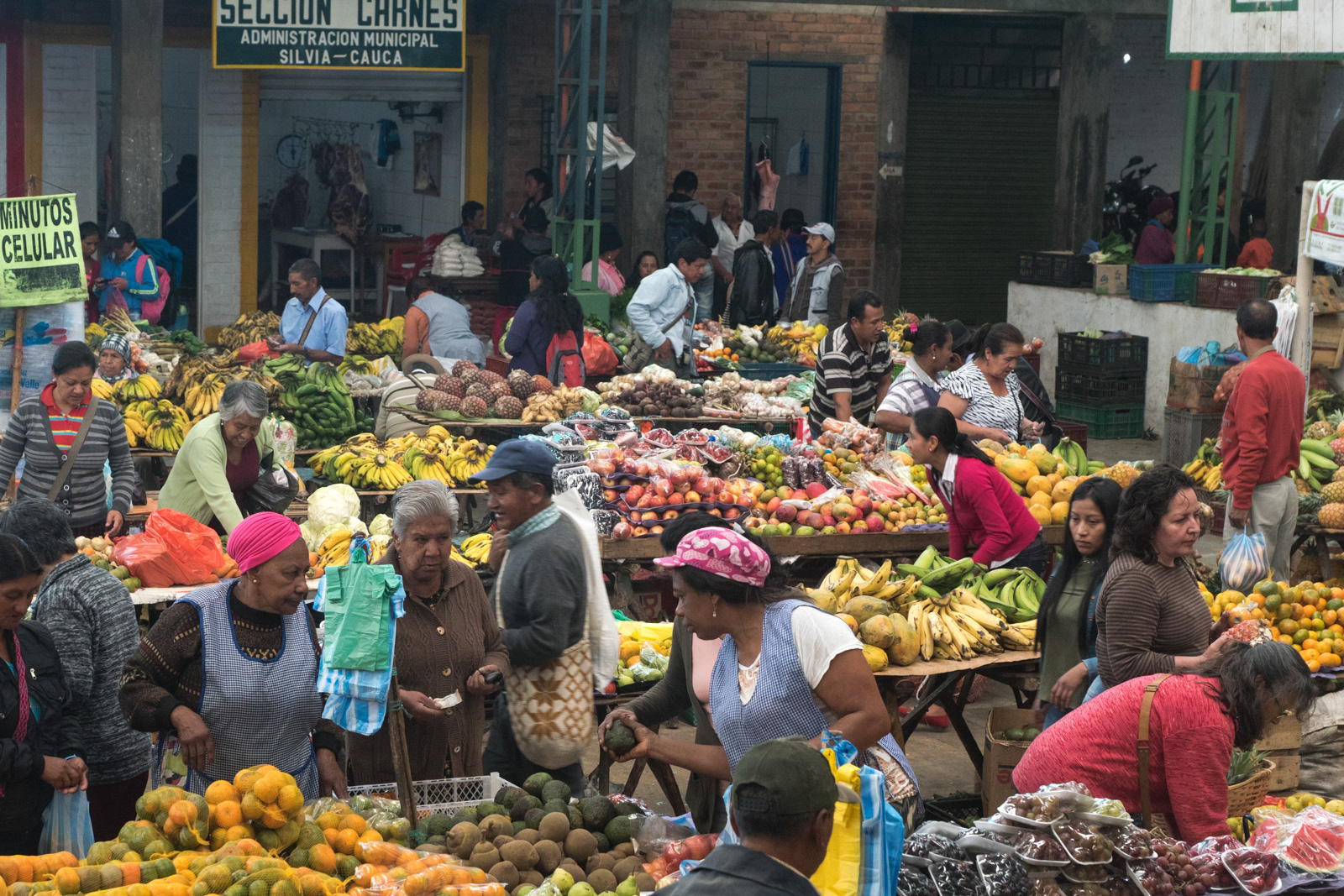 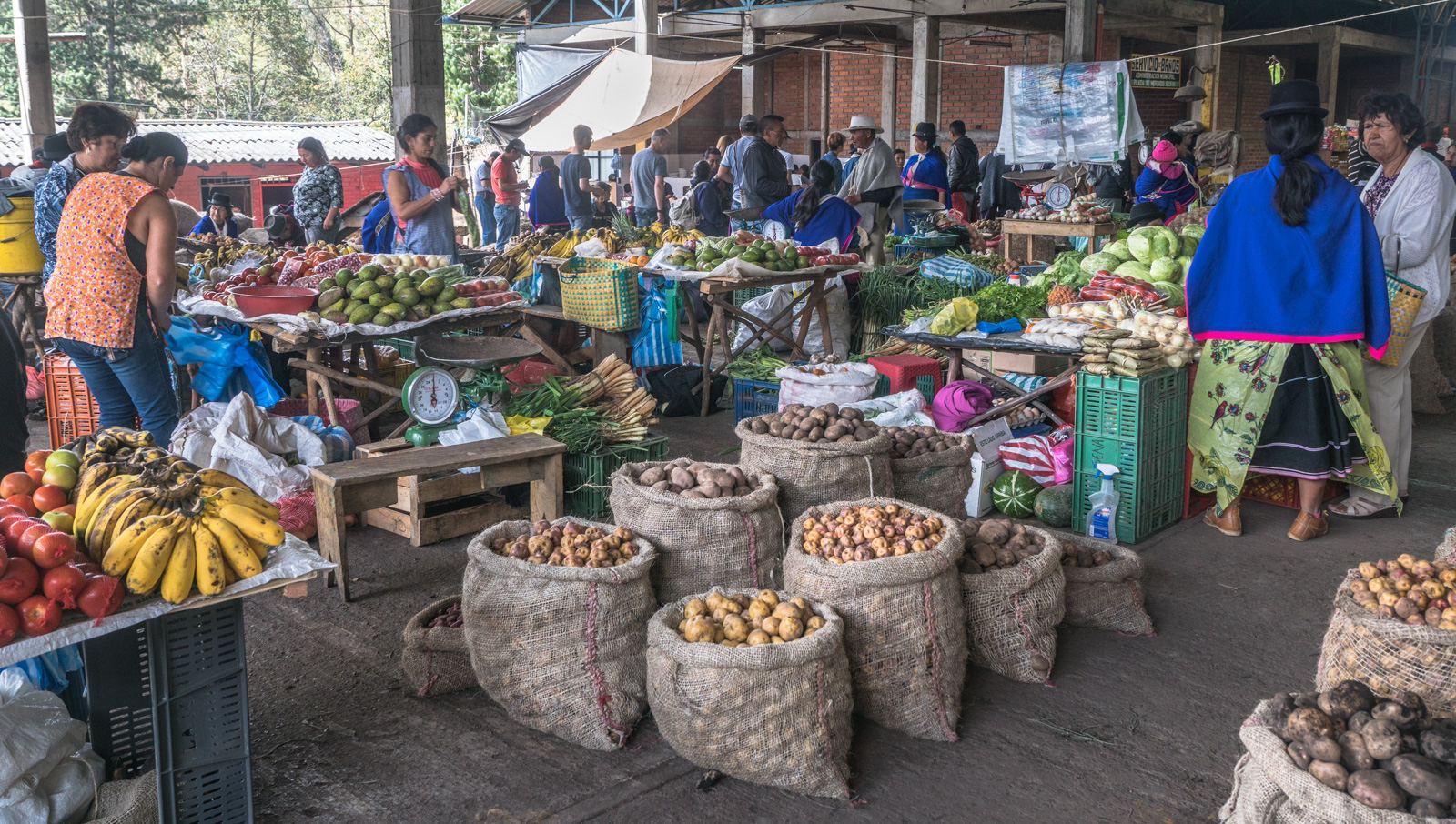 With Kyle and Allen wanting to start moving south, fast, a reunion trip for Kyle’s 30th birthday was a requirement, and what better place to do it than Cali. It was the “Salsa Capital of the World”, and the two-week long Pacifico Petronio Music Festival. In typical fashion, we rented an AirBnb, and the whole gang assembled. Even Autumn flew down from Medellin along with Kyle and Allen’s lady friends, Laura and Tania, whom we met along the way. With a full house we spent Kyle’s birthday weekend playing loads of beer (and wine) pong, BBQing, celebrating, and attempting our amazing salsa moves in one of Cali’s most prestine clubs. 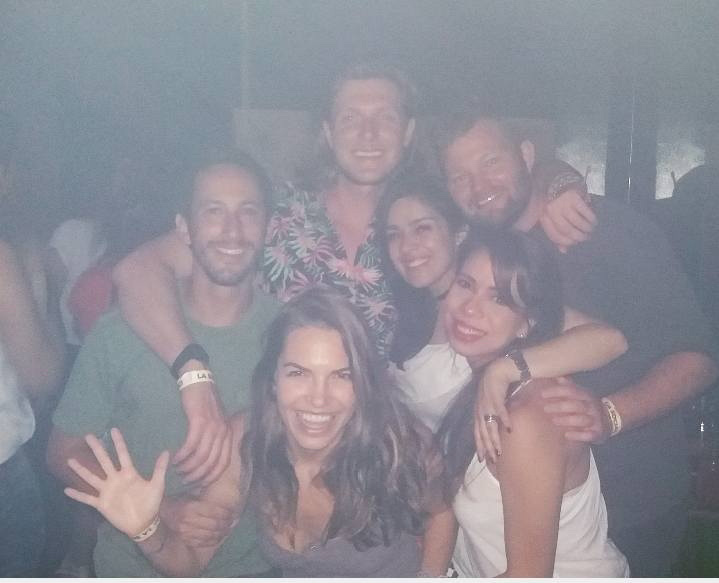 We ended the weekend by going to the closing night of the music festival. While the whole 2 week festival is free, the closing Sunday night brings in the biggest crowd. None of us had seen anything like this. There were thousands, upon thousands, of people everywhere inside the stadium grooving, dancing, and enjoying the live music. There were steel drums, brightly colored clothes, ornate head pieces, and people parading around. It was almost as if we were attending a mini Carnival.

From Cali we headed back through Popayan (thankfully no bikes caught on fires this time), and on to San Agustin. The ride from Popayan to San Agustin was incredibly fun, but would have been bone rattling on a bus. It cut directly across the Parque Nacional Purace’s high alpine, volcanic scenery. It was muddy, cold, and wet, which translates into one amazing day of riding. 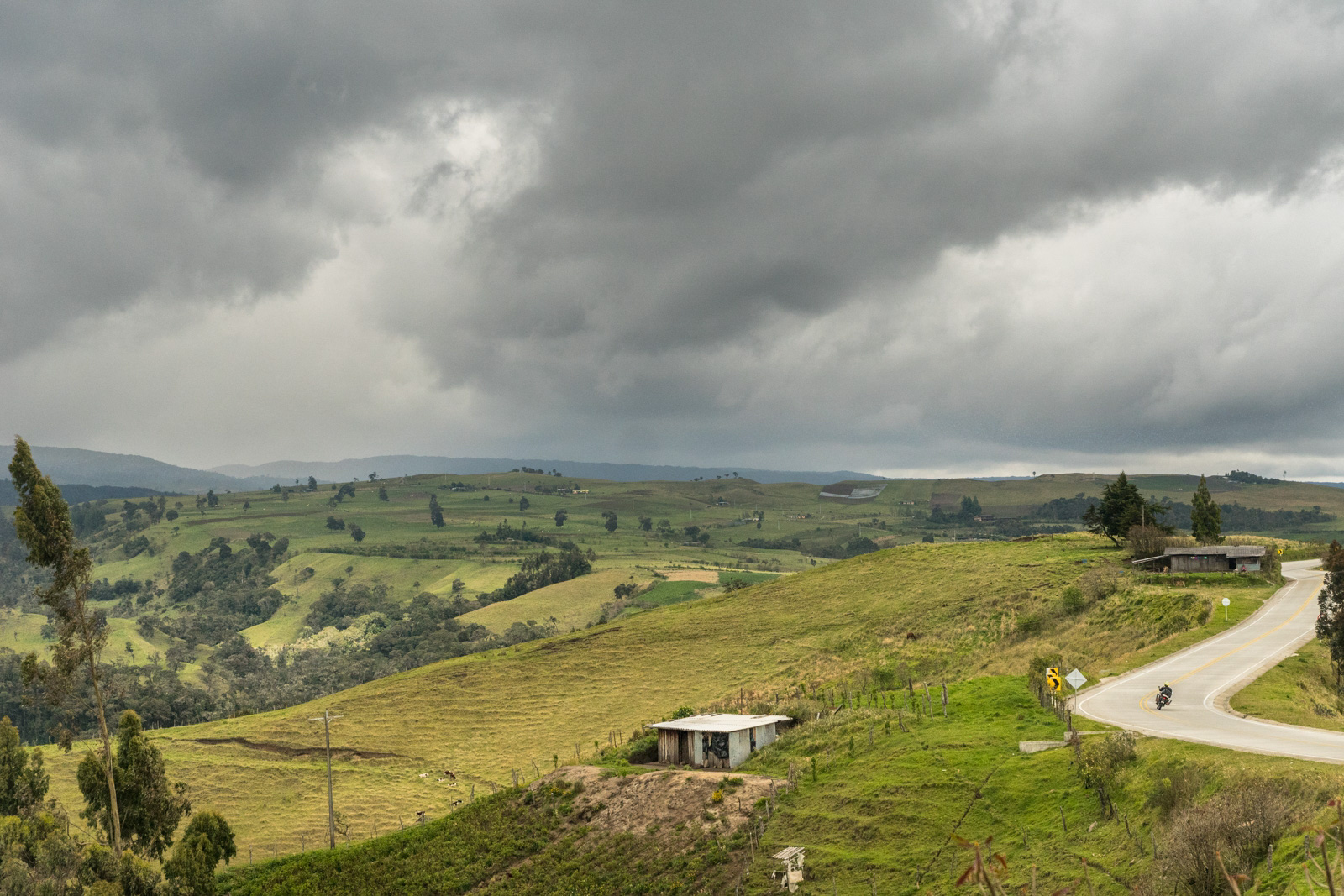 Once in San Agustin we spent our days relaxing, hiking around, and going on a few amazing motorcycle rides through the finacas and sugar cane fields around the area. Again, this reminded us of WHY we chose to travel via motorcycles. Being able to get deep into a region at your own pace with your own freedom really allows you to see local life and culture at its finest! 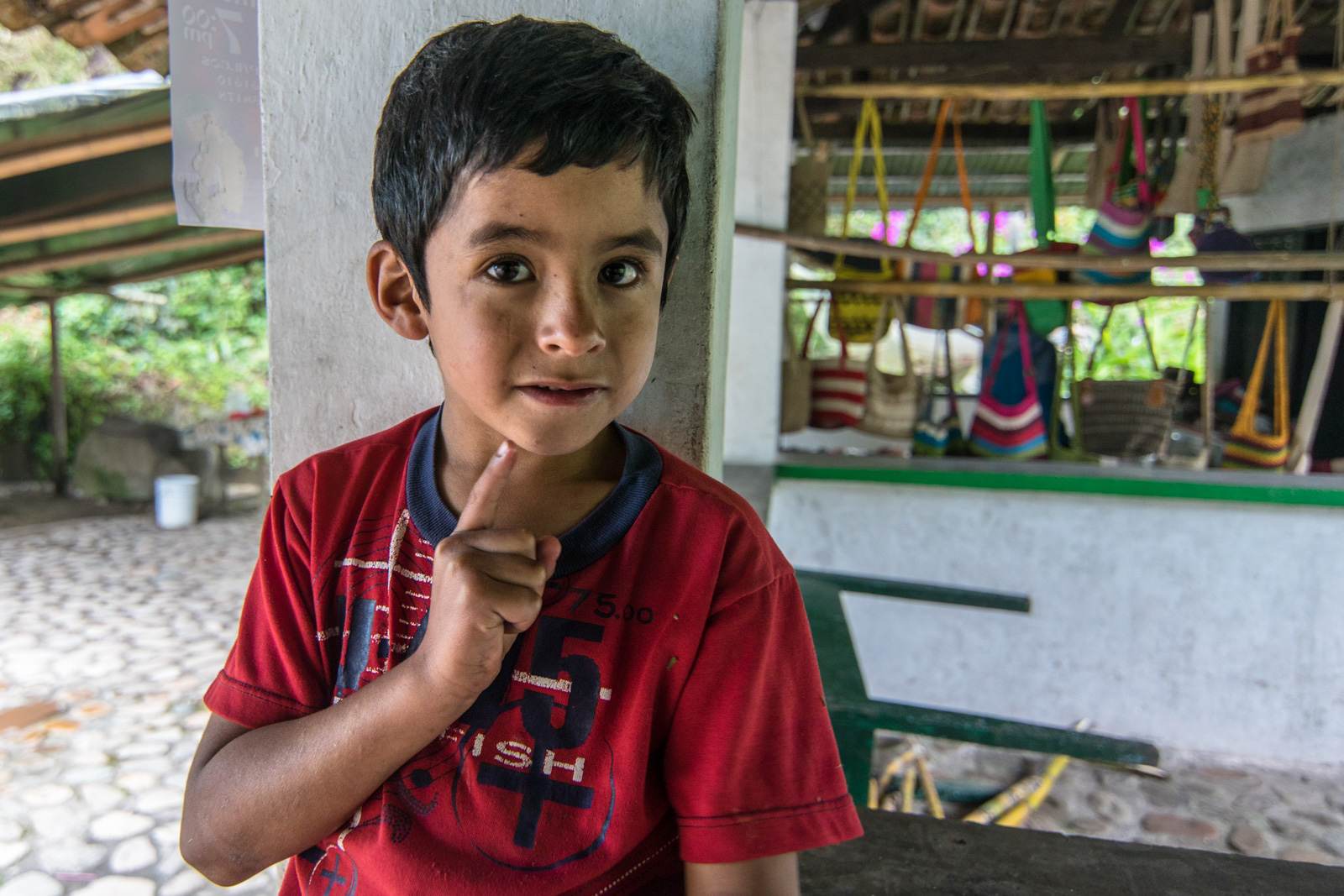 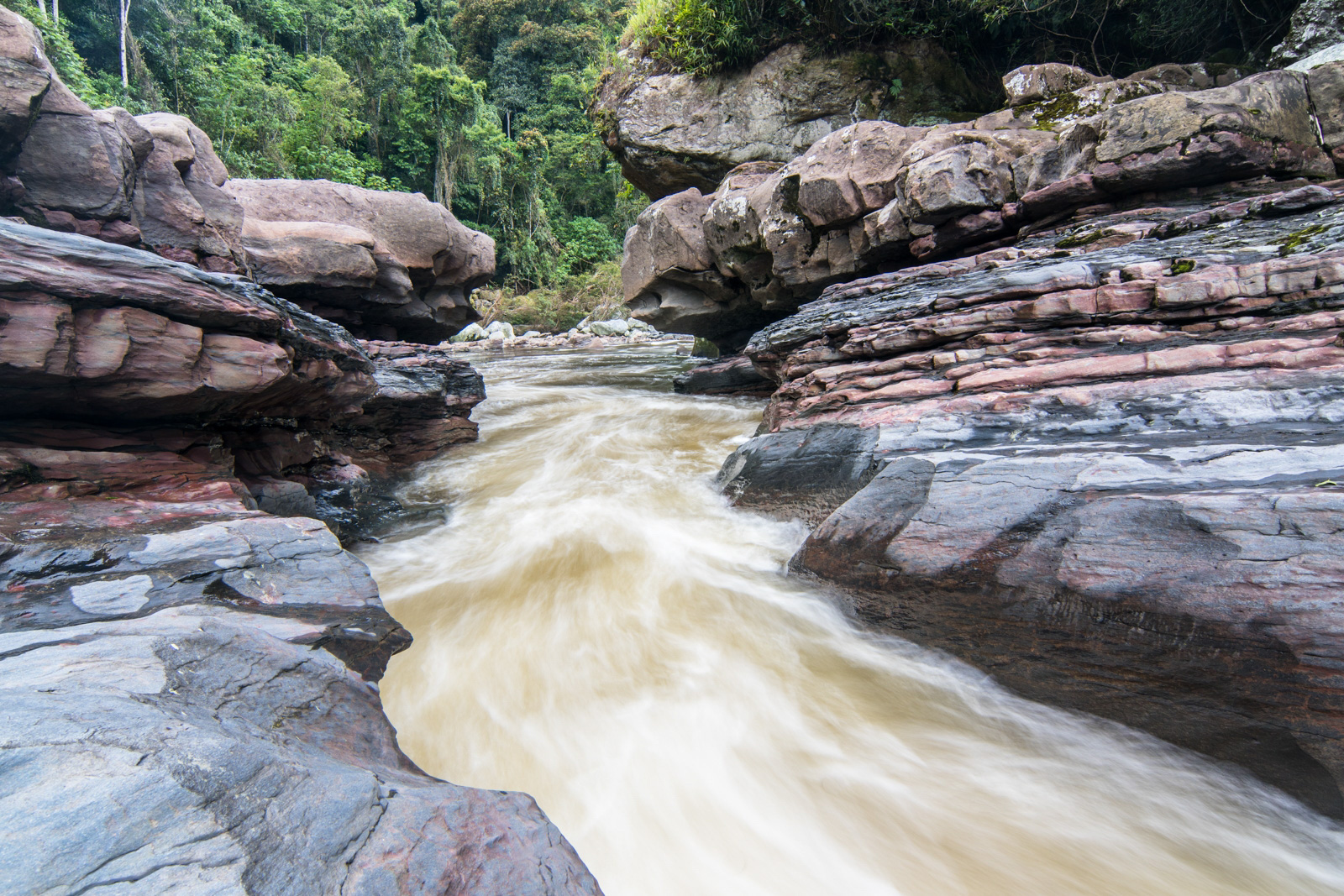 Our most unique, yet confusing, moment in San Agustin happened on a quiet Thursday night. While we were walking home from dinner a rather clean and shiny SUV approached us, “Hola, I am Jose, and this is my wife Carla. Would you boys be interested in coming to our house one evening to learn about the process and make some of your own “product”. It is a “special tour” we like to offer”. We had no idea what to think? Was this guy really asking us what we think he was asking? While he seemed super nice, like most Colombians, we respectively declined and walked home laughing about the incident. We later learned that this town was known for its “special tours”, and had heard it was quite the experience. We could’ve funded our whole trip with this knowledge!

Running out of days on our visa it was time to jet out of Colombia, but not before one last epic journey. Leaving San Agustin we headed for Mocoa, the launching point to Colombia’s famed death road, Trampolin de la Muerte. The drive is compared to Bolivia’s death road, yet supposedly subtler (less deaths). It was 80 KM from start to finish ending in San Francisco full of hairpins, waterfalls, death defying drop-offs, river crossings, and blind corners. We had a few close calls with on-coming traffic, but no one died and the sun was shining the entire day…what a great days ride!! 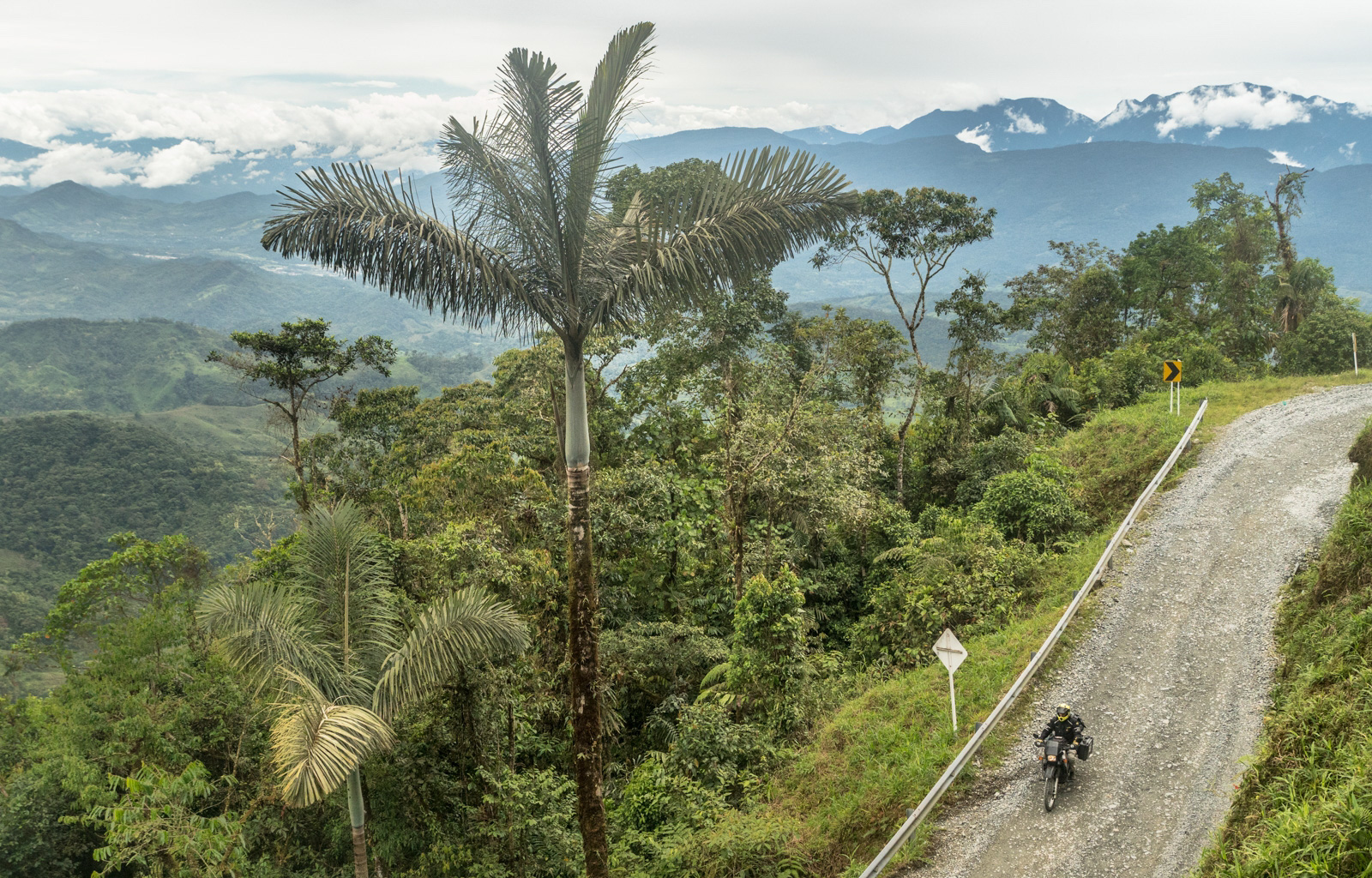 Not being able to make it to the border the same day we stopped and spent the night, which turned into three, in Laguna de la Cocha. While searching for a place we ran into Francisco, who turned out to be a great host. He showed us all around, enlightened us with all his hippy, yogi, granola eating thoughts, and treated us as family. We went for walks through the village, hung out with local campasinos, and made a couple visits to the local school where we practiced our long-division skills. 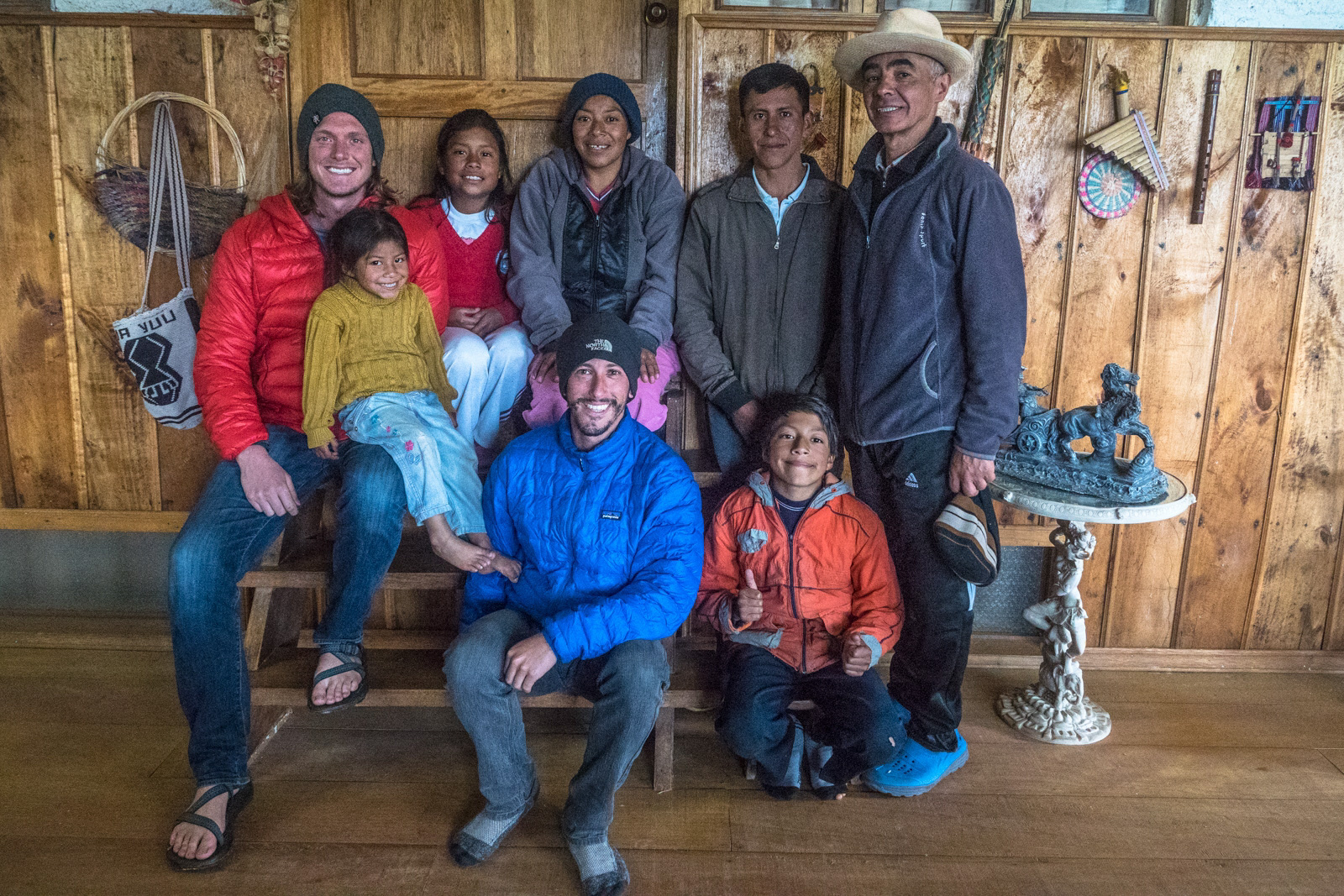 It was a sad goodbye to not only Francisco, but Colombia. We headed to the border with a quick stop at Santuario de Las Lajas. 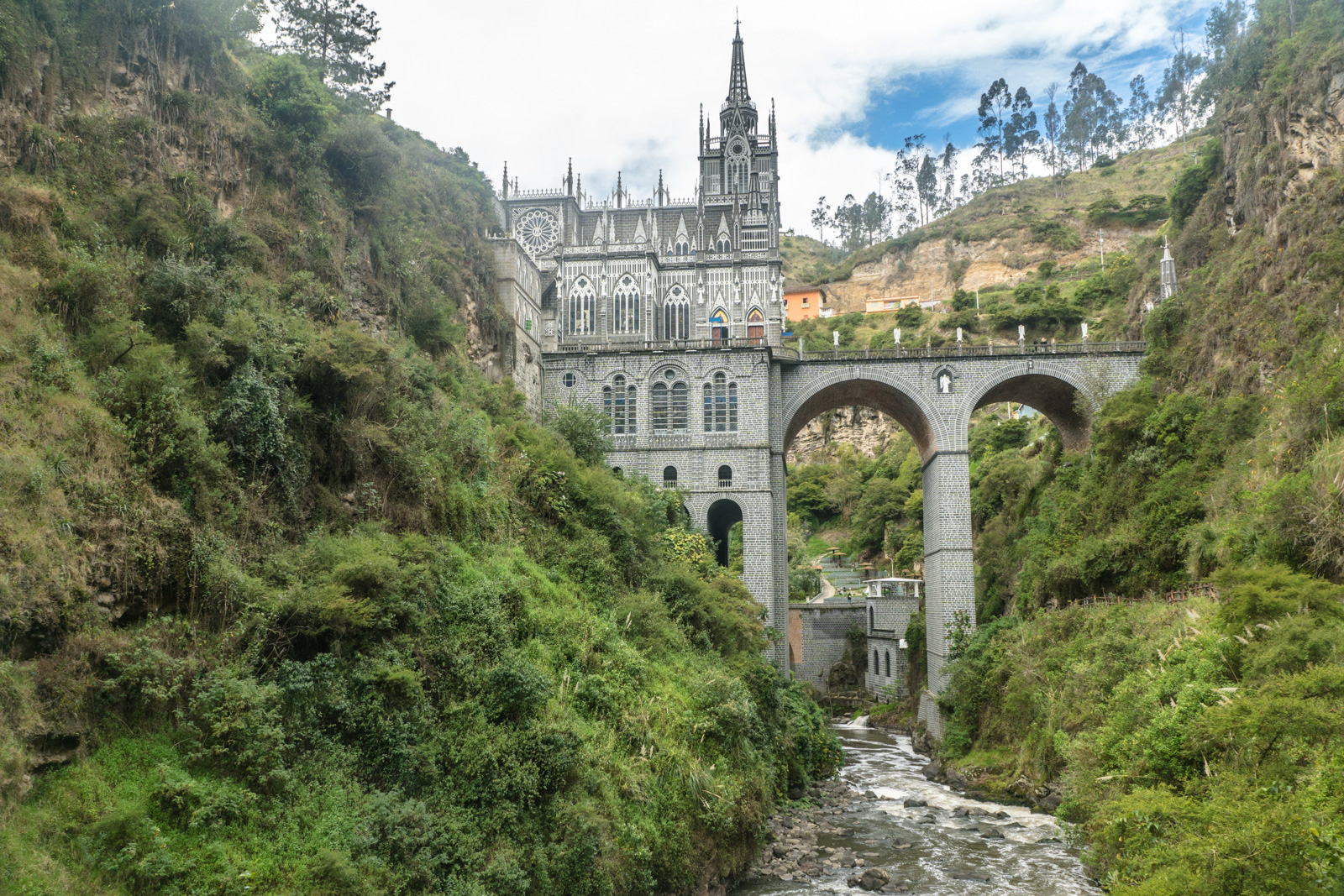