The Great Sand Dunes, formed less than 440,000 years ago, was a destination I’ve been trying to get to since I moved to Colorado almost four years ago. For some reason or another something always seemed to get in the way whether it be work, sold out campsites, or blistering heat. So when my buddy Andy decided to fly out for a Southwest Colorado road-trip I knew we had to lump the Dunes into our route, hopefully backpacking and camping in them. Andy and I were no strangers to epic road-trips. This would be our second within the year as he met me in New Zealand for a 1,200 mile road-trip through the South Island of New Zealand. Sadly we would be without the creature comforts of a camper van on this trip. My trusty Subaru and tents would have to suffice. For those of you reading this that know me well, yes I am well aware I should just shut up and buy a van already.

After a weekend of bike rides, frequent stops at craft breweries, and one hell of a night at Red Rocks we packed the car, stocked up on supplies, and plotted a rough route on Google Maps before finally catching up on sleep. Excited to have my first day off in almost six months we departed early, squeaking out of town just before Monday’s rush hour traffic began. There is varying routes one could take south to the Dunes, some more scenic than others. Unfortunately, we were in a rush to get down there so we took the most direct and quickest route, I-25 South to HWY 160. 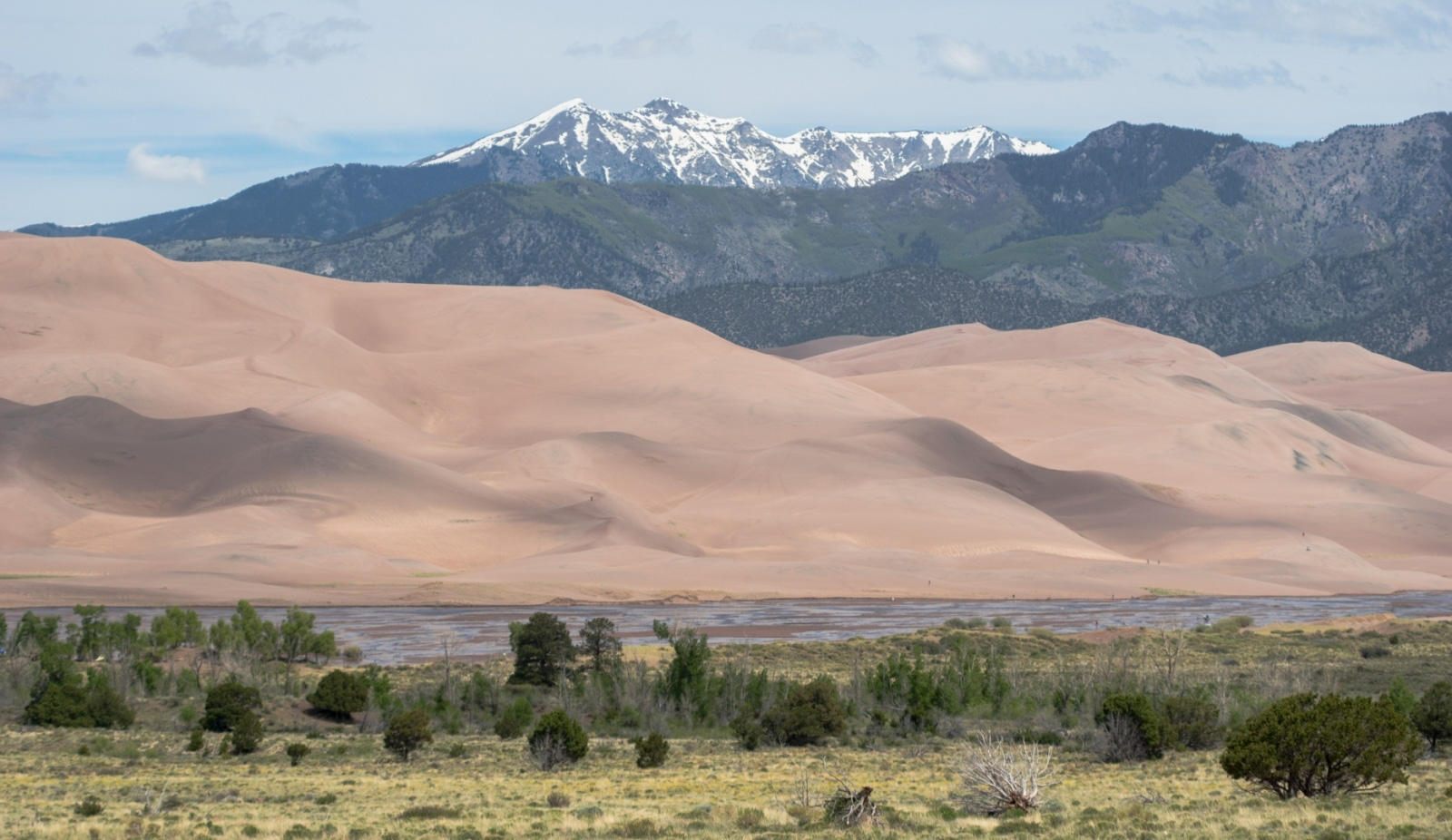 Spring is by far the busiest time of year to visit the Dunes as Medano Creek is at its peak flow. Procrastinating as usual, to not commit to anything set in stone, we had no campsites reserved. In the days leading up to our departure I phoned the park office several times to gauge how quickly the first-come, first-serve sites were filling up. The answers varied by day, but the answer was always “quick, get here early”. Being a Monday we had high hopes in either getting a camp spot or more preferably a backcountry permit.

After a hurried and uneventful drive down we reached the park entrance. Before I could even ask the attendant, by process of elimination, option 1 was already ruled out. There it was clearly posted “All Campsites Full”. It was a little after 10:30 AM on a Monday. Fingers crossed, we quickly zipped on down to the visitor center to inquiry about a backcountry permit. We were in luck! We were the first group to request a permit for the day. We were beyond ecstatic to be sleeping in the dune field! Little did we know I would still be picking sand out of every crack and crevasse.

Being so early in the day the full on feet scorching sand had not quite reached peak temperature yet. We had quite the logistics to figure out. Not having a designated campsite, how was Mike supposed to find us when he drove down mid-day to meet us? We had no radios, no cell service, and there was 44,246 acres accessible for camping. We’d figure that all out later. We needed to take full advantage of the cool morning air, before the sand becomes blistering.

We quickly exited the park in order to rent a sandboard and shoot off a quick text message before returning. It seemed perfectly logical for our first activity given we are both avid surfers and snowboarders. Heading across the creek, our feet quickly became numb in the snowmelt, which was a nice reprieve before reaching the hot sand. We stood there trying to pick out which line or dune we wanted to ride first. Andy pointing out smaller manageable peaks, while I scoffed at them thinking they’d be cake thinking we should go bigger. Boy am I glad we started small. 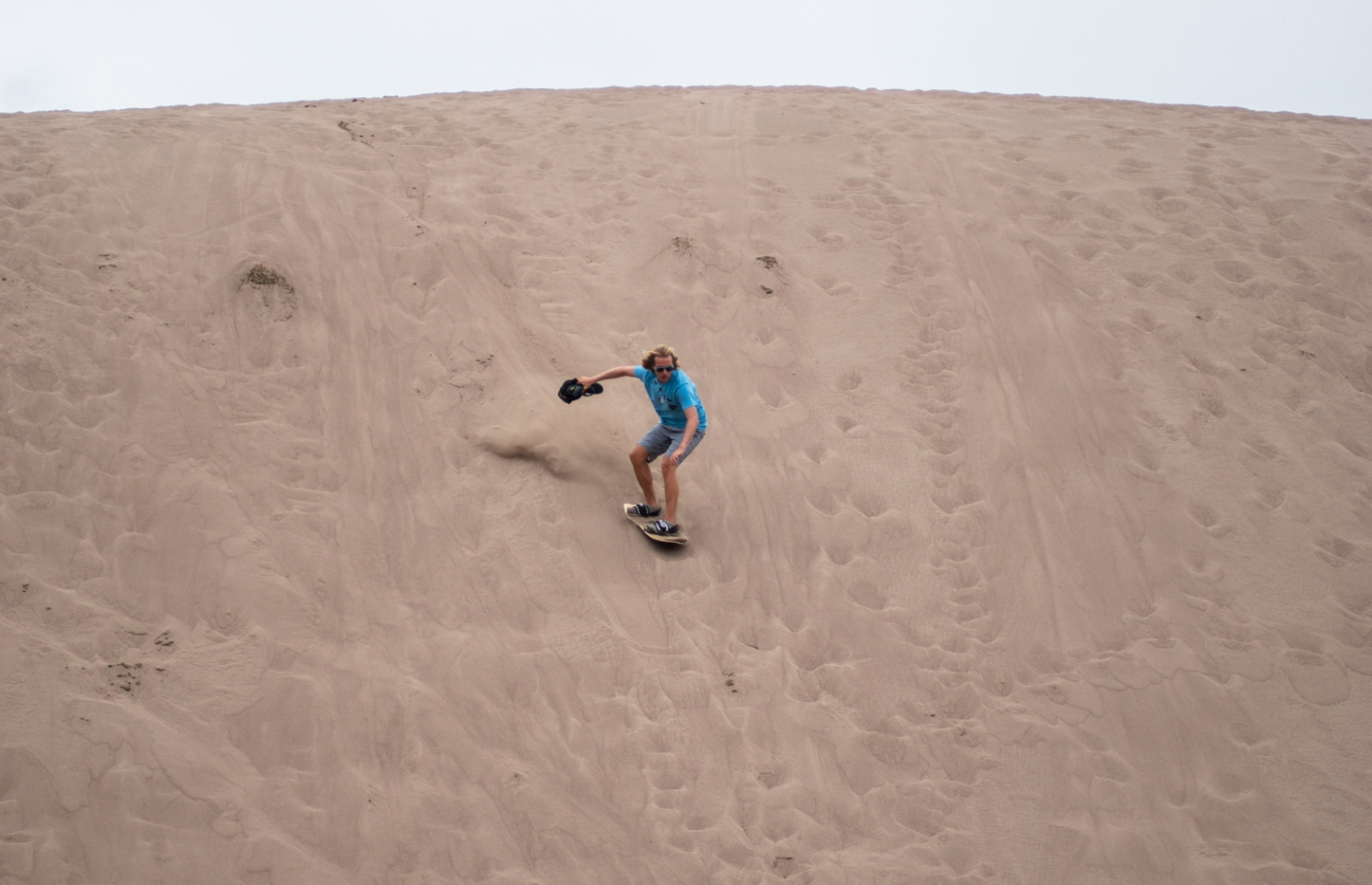 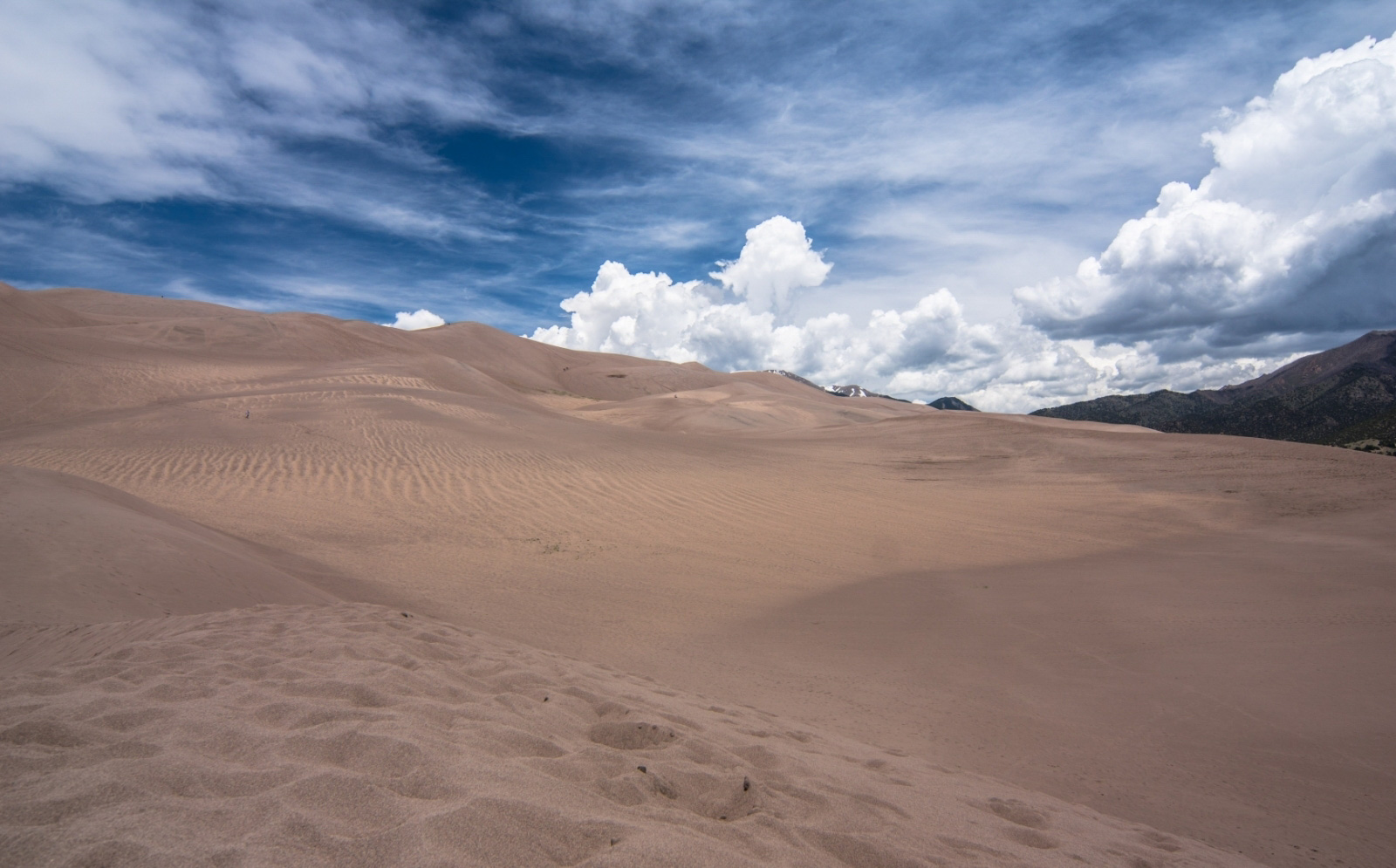 After an exhausting hike in the sand, which is much hard than anticipated, we reached the summit of the first dune. I quickly waxed the deck, strapped in, and without thinking pointed downhill and dropped! What no one tells you is you physically cannot turn or speed check. The board just plains. Hauling ass, board chattering beneath my feet I successfully made it into the flats. Breathing heavily and smiling ear-to-ear, I quickly hiked back up the dune. It was Andy’s turn. Having actually had the time to watch me and others he was slightly more hesitant. He strapped up and dropped, but quickly stopped himself, before successfully making it into the flats. We spent the next few hours trading off riding the dunes, each time, trying to go faster and faster. Exhausted we finally called it quits and headed for Zapata Falls for some shade and cool water. 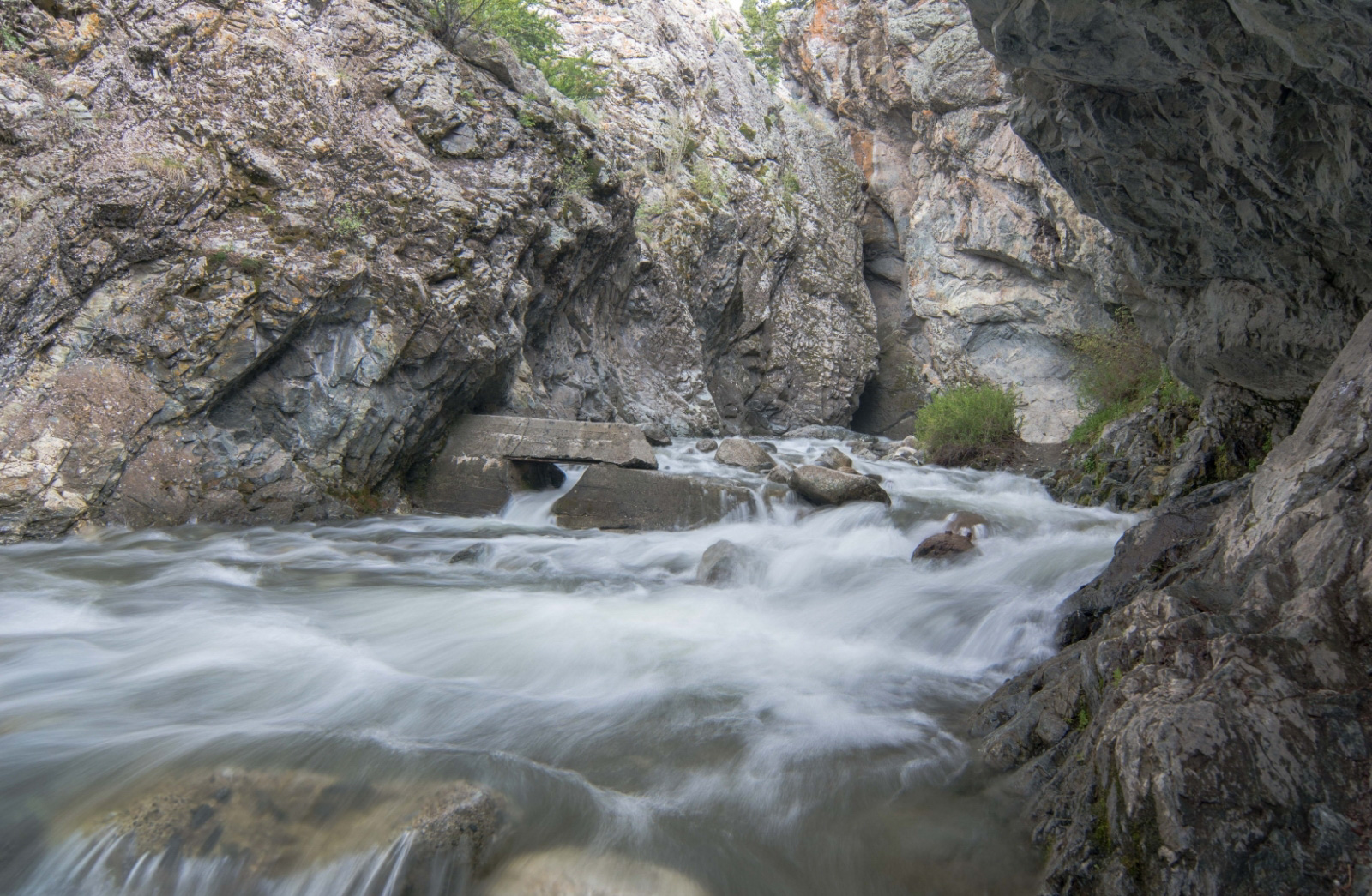 With the afternoon temperatures came thunderstorms accompanied by strong winds, thunder, and lighting. Not wanting to be in the dunes, unprotected from the elements, we stalled by making an early dinner and organizing our packs for the evening. It was almost our “cut-off time” of 6 PM. The storms had cleared but Mike was still hours away and delayed. We needed to get into the dunes before sunset to take full advantage of the evening light. Camping in the dunes once you have a permit is a free-for-all. You can camp anywhere you please once you are 1.5 miles in or past the first ridge. This makes it very hard to find anyone. Andy quickly pulled out his phone and snapped a picture of the dunes with his index finger pointing to the ridgeline we were shooting for. I had less than high hopes Mike would actually find us, but off we went. 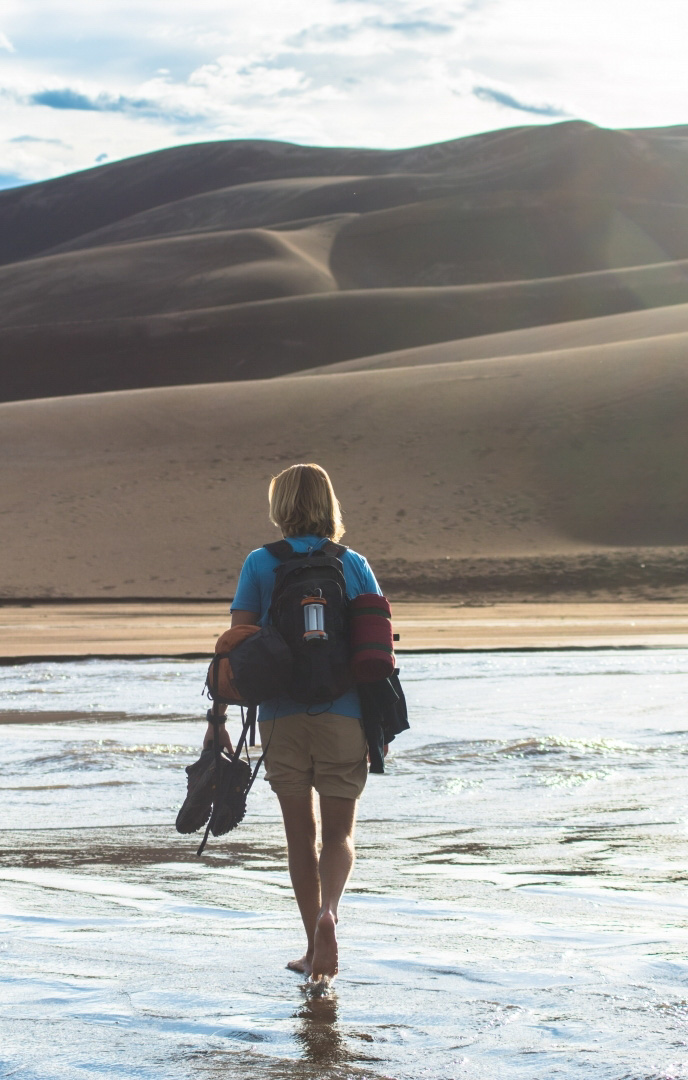 Heading into the dunes was a magical experience. The sun beginning to set created a kaleidoscope of shades and shadows. The sand turned from a boring brown to a rich gold and orange contrasted by the deep blue sky and snow capped San Luis Mountains. We began the hike again by crossing the creek. Without the sun it was noticeably colder, numbing and burning our feet. It took our minds off the 25+lbs of camping gear, food, water, and camera equipment that was loading us down. It was hard not to move slowly, stopping for pictures, and just spinning around staring and trying to take in the vistas and the grandeur of the place. 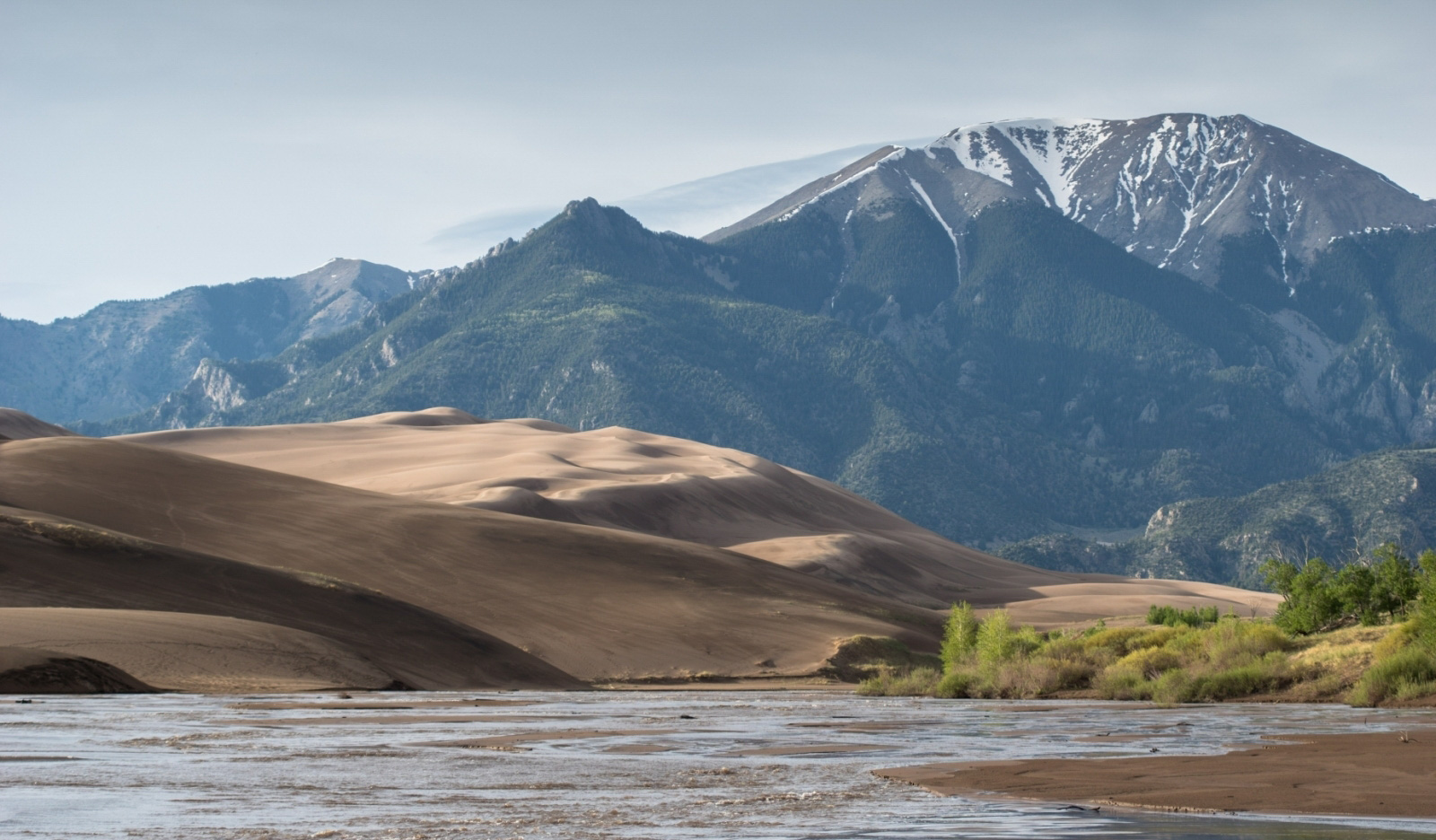 We continued up the dunes blazing our own trail aiming for the peak we told Mike we’d be behind. It grew steeper and steeper. Trying to reduce the weight on our feet, causing us to sink into the sand, we crawled on all fours barefoot with our shoes on our hands. This weight displacement helped tremendously.  Grunting and scrambling with sweat dripping from our brow we crested the ridgeline. What we saw stunned both of us. Neither of us comprehended how massive and incredible the dunes would be from this vantage. It was like nothing I’d seen before. 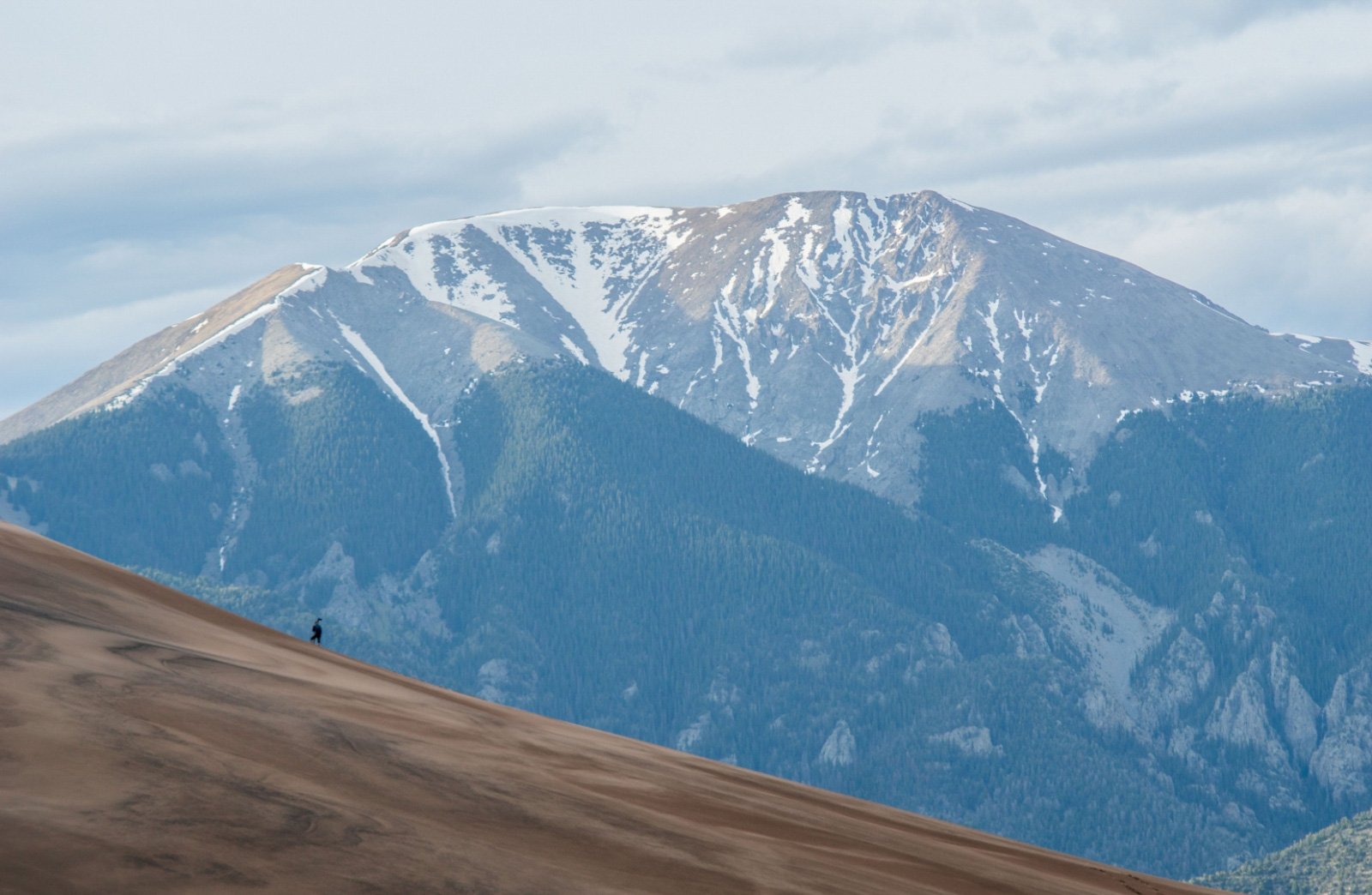 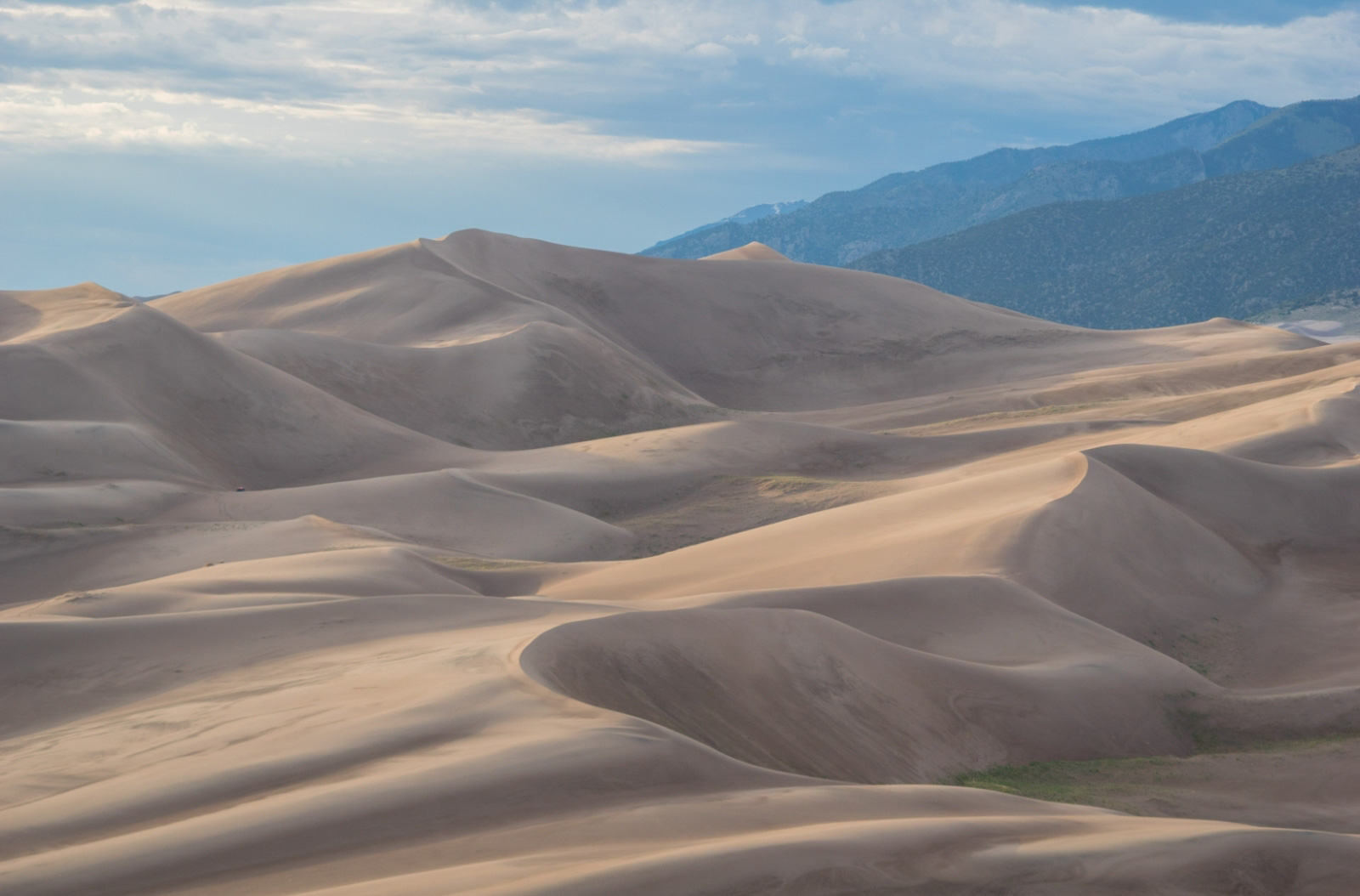 At this point in time the weather was beautiful and the sun began to set deeper into the horizon casting a myriad of shadows and deep red hues on the dunes. We set up camp, explored the dunes, and just took in the worldly sights. While enjoying the sunset Andy spotted a faint light crossing the creek, could this have been Mike? Sure enough about 45 minutes later the flicker of a headlamp peaked over the ridge. Mike arrived just in time for the last glimmer of sunset. We setup his tent and relaxed not knowing what was to come. 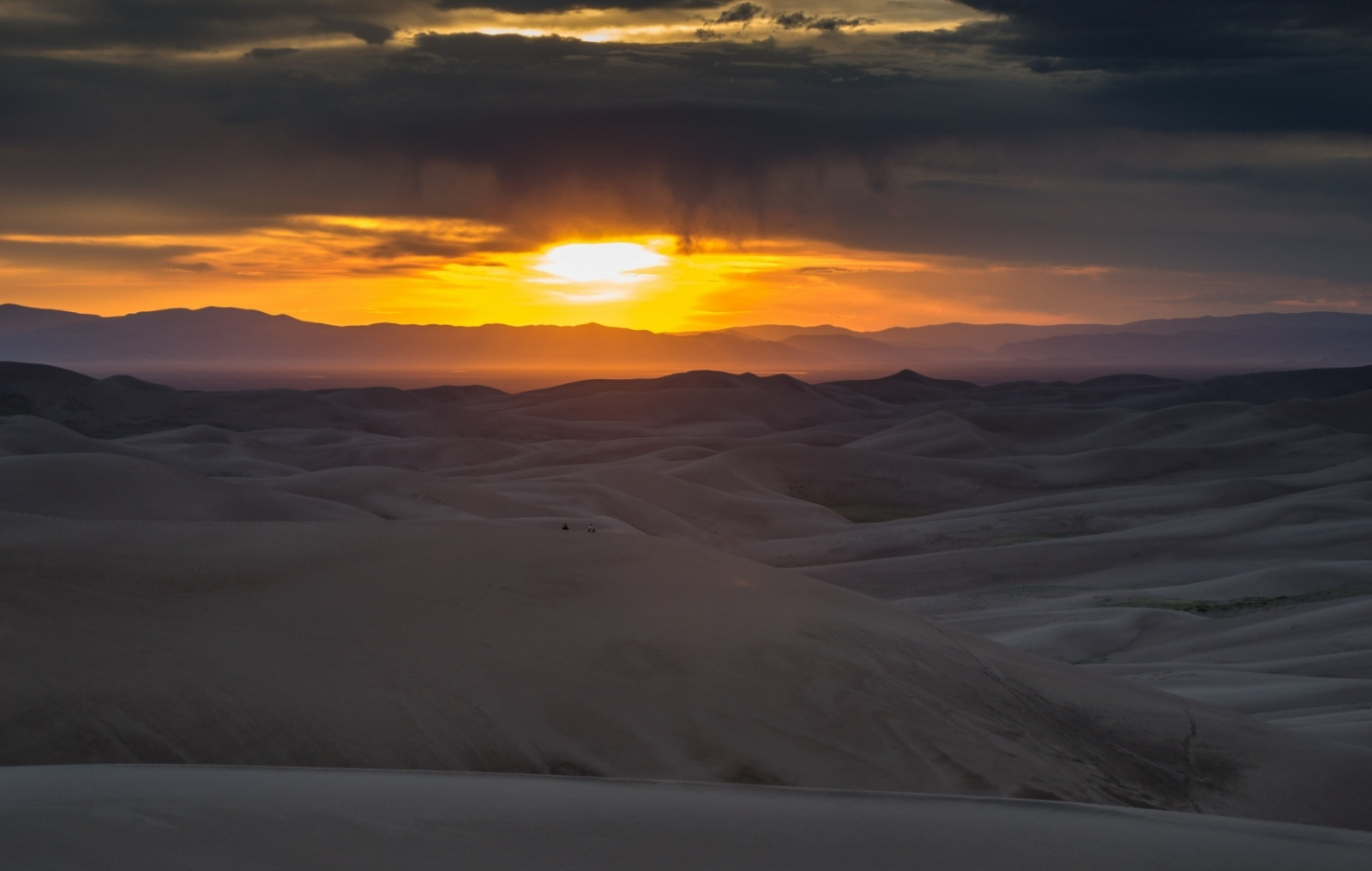 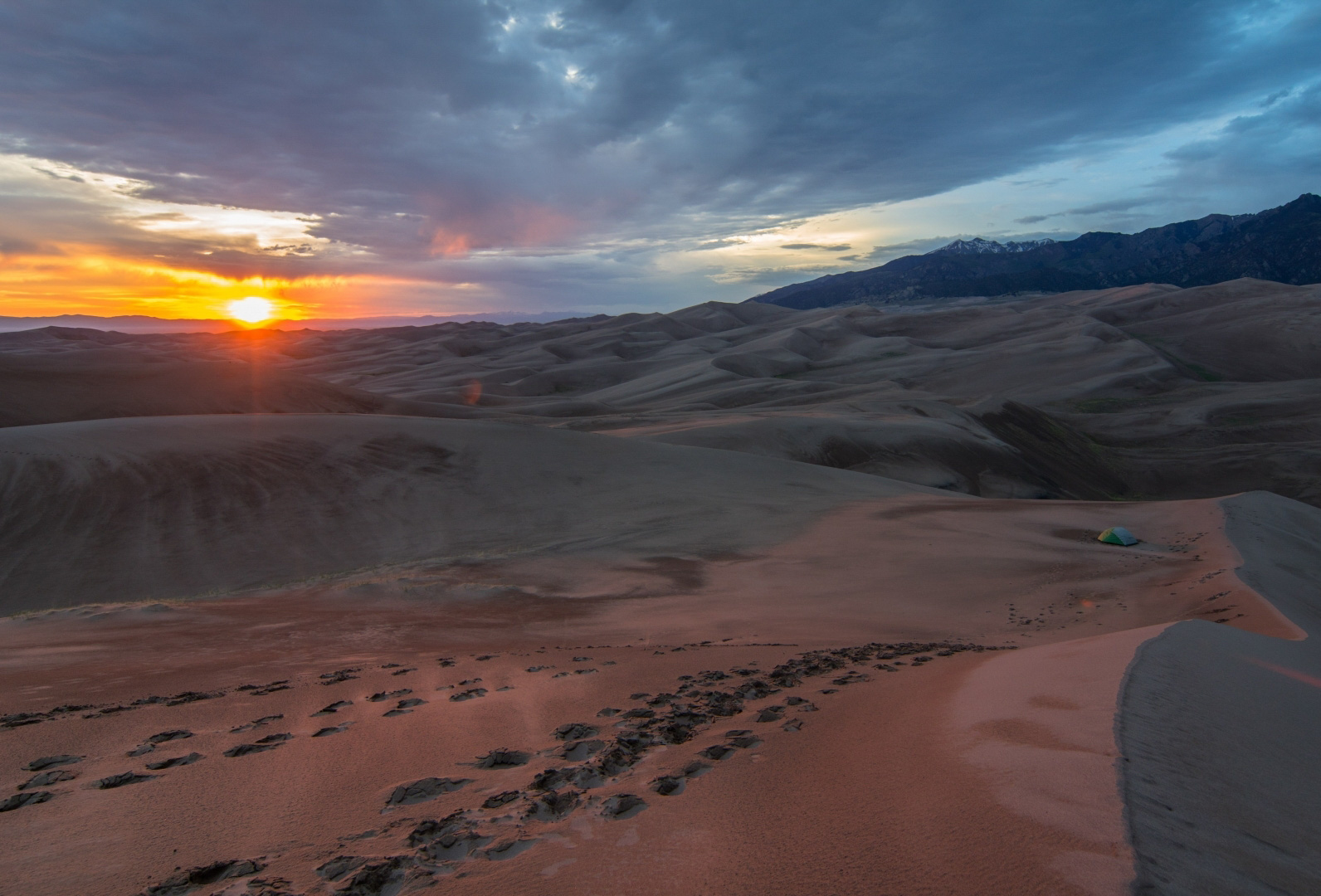 It was as if someone had flicked a light switch on the weather. Out of nowhere the wind began to howl getting quite blustery at times. Then it picked up even more with gust of 35+ mph. Everything began to shake and move. Tent stakes flying about. At one point we had thought it subsided only to look back and see half of our tent lifting up. We tried repeatedly to get the stakes back in, but the ground was too soft. We thought we were low enough in the bowl to be sheltered. Wrong! In was pure chaos, we were getting pelted in the face, eyes, and any exposed skin with sand. We struggled for about 30 minutes until Mike busted out his shit-shovel and started digging holes. We began burring anything we could find into the sand and tying the tent guidelines to it. Nalgene bottles, our hiking packs, hydration bladders, and my thousands of dollars of camera equipment (in a dry bag luckily) all became anchors. Taking a step back, crossing our fingers, it actually looked like it was going to hold. Seeking shelter we all climbed into the tents to play a game of cards and flush the sand out of our eyes. 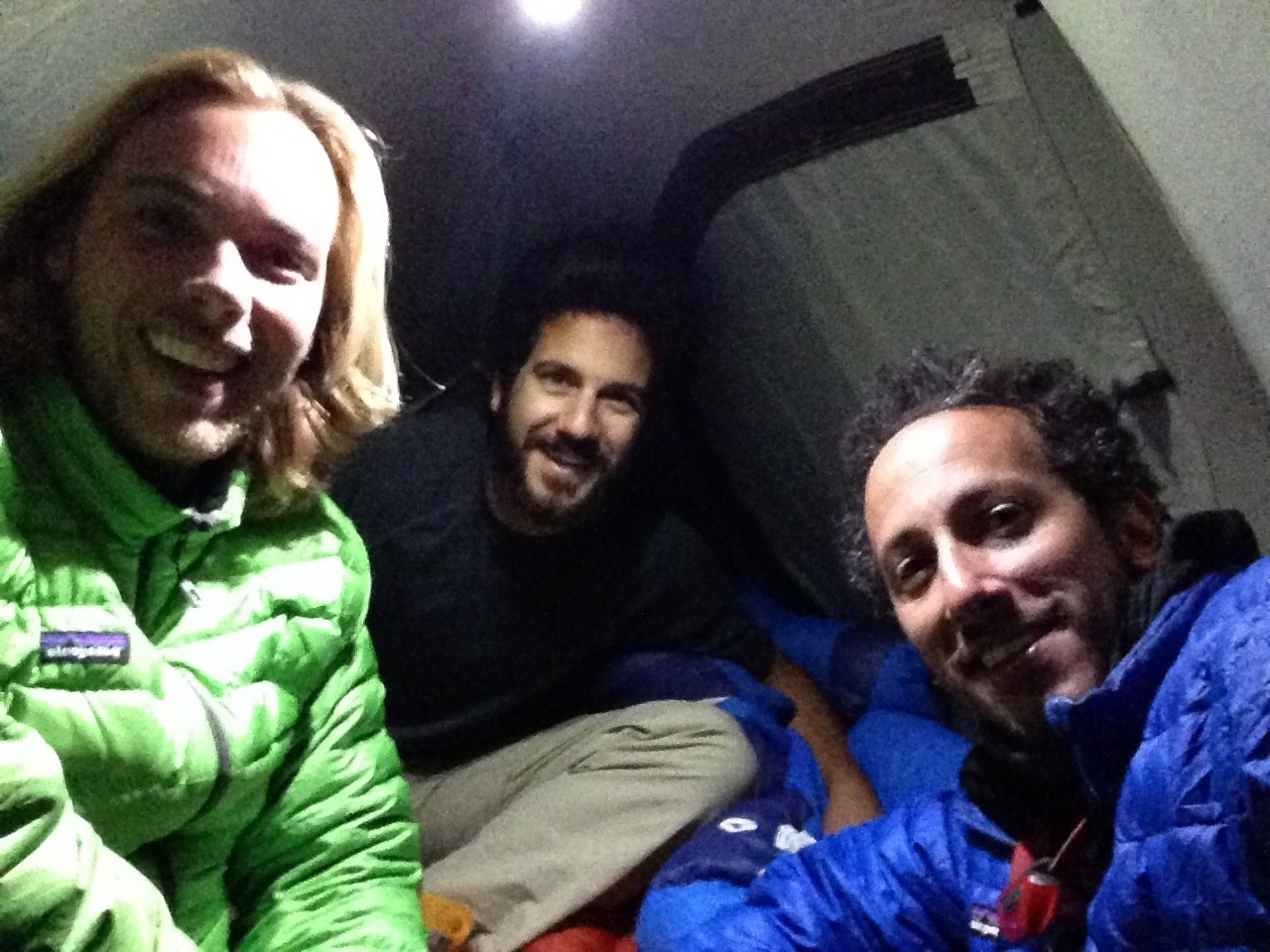 Pounds of sand had accumulated in our tents. Being 3 season tents they were no match for the fine granular sand. It was just ripping through the tents walls. I had to sleep with my back to the wall or else I probably would have choked on sand all night. It finally subsided around 3am to reveal still peaceful air with clear skies dotted with stars. Had last night really happened? It was one of the craziest camping experiences I had ever had.

We all awoke gritty with sand peaking out of the tents. Everything was still and calm without a cloud in the sky. The morning sunrise casted shadows on the ever changing landscape. The wind storm had removed all our footsteps and created all sorts of patterns and textures in the dunes. It was breathtaking! We sat there all morning up on the ridge not seeing a sole in complete and utter awe. 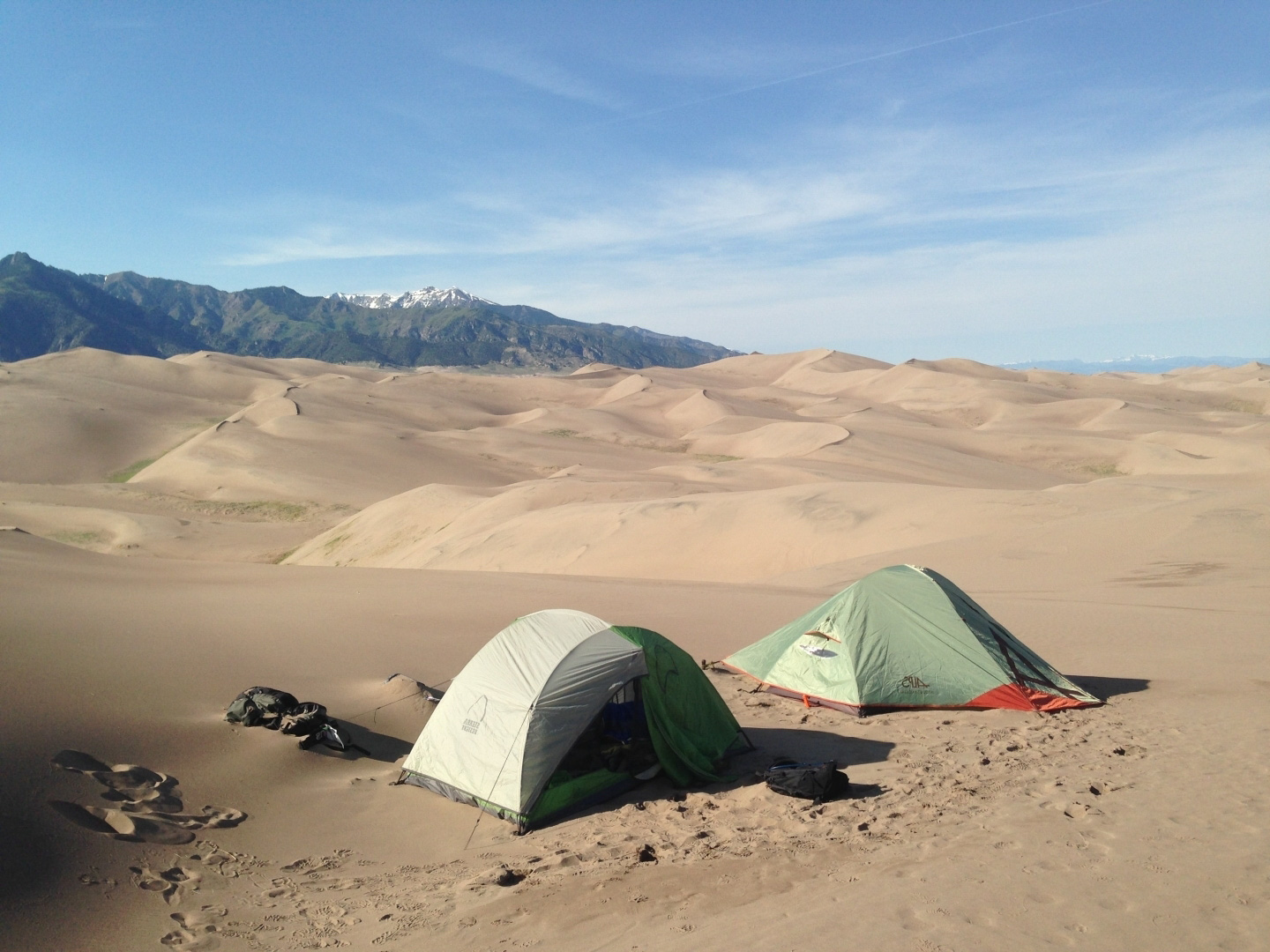 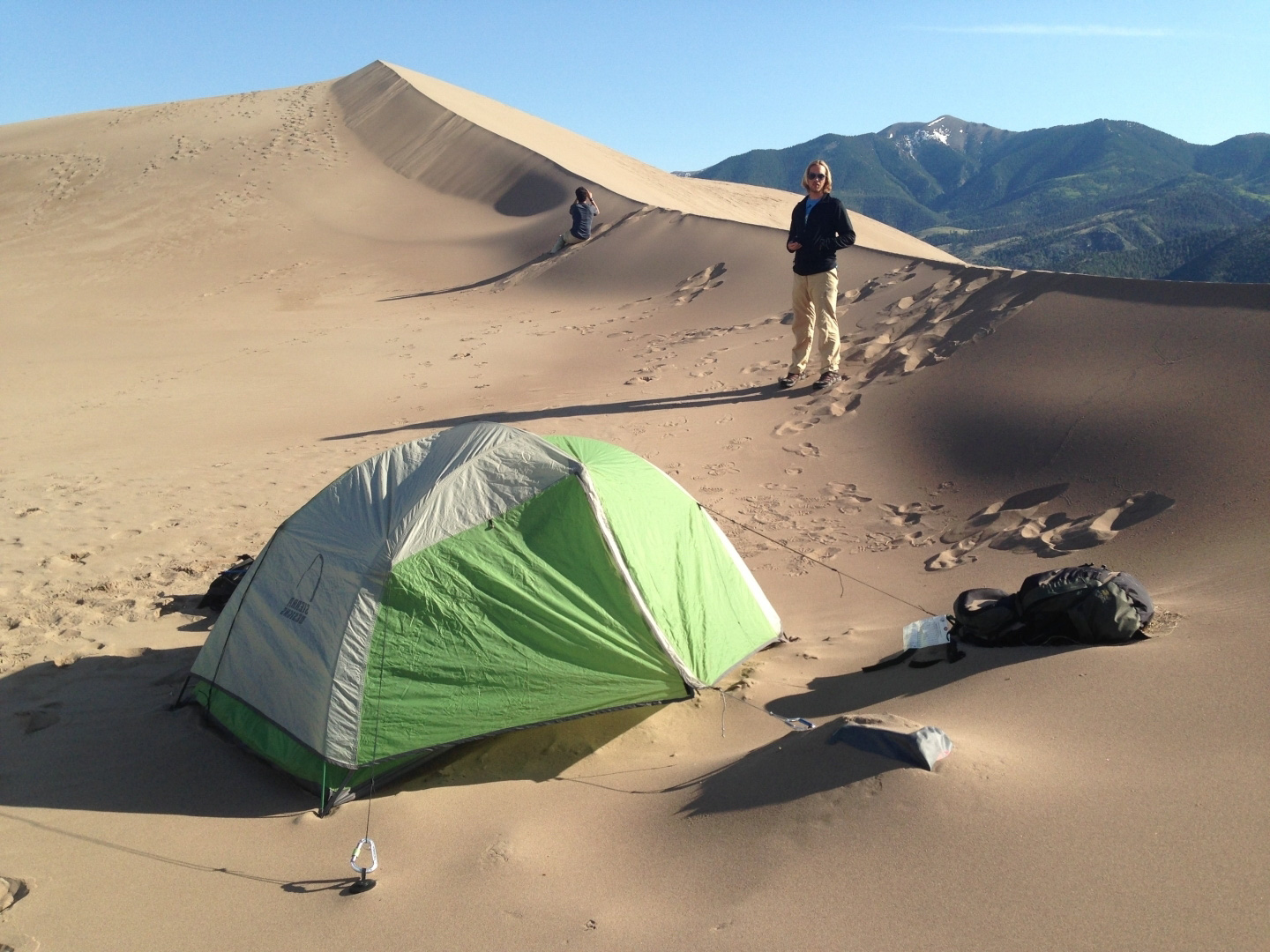